If you think about a car’s internal combustion engine as a mechanical symphony of moving parts, then the timing belt is really the hidden conductor of your engine’s orchestra. A timing belt is what makes sure all your engine components are performing their roles in perfect harmony.

If the belt is already broken, the engine won’t start. In a worst-case scenario, it fails while the car is in motion, inflicting catastrophic damage to the engine. A timing belt breaking or slipping while in motion will damage engine parts, and this will most likely be fatal for the engine. Trust me, you don’t want to be doing 80 mph on the highway if that happens.

In this guide, we are going to tell you everything you need to know about replacing a timing belt, so you don’t get stranded with a shutdown engine.

A typical preventive timing belt replacement job should cost anywhere from below $500 for a small sedan to up to $2,000 for a luxury SUV. The part itself is cheap, so you can reduce the cost to less than $50 if you’re skilled enough to do the repair yourself. Keep in mind that broken belt could end up setting you back quite a lot more, as other damages are likely to occur when the belt fails—so fix the problem before it’s too serious.

What Is a Timing Belt? 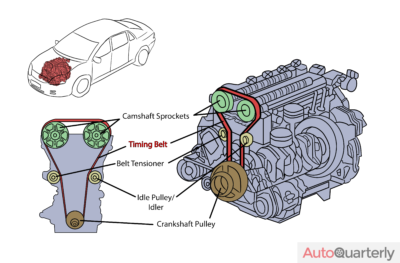 The timing belt is responsible for keeping the engine’s functioning parts in sync. Housed at the front of the engine, the timing belt cannot be seen because it is concealed by a cover. It’s hidden behind this cover to protect it from damage. With a timing belt, you can’t assess its condition simply by looking under the hood,

How Does a Timing Belt Work?

The timing belt controls the timing of the pistons and valves that fire fuel and air into the cylinders, thus igniting the engine. For this process to take place, the valves have to open and close at the right time for each cylinder. The timing belt synchronizes the rotation of both the crankshaft and the camshaft. The camshaft is what operates the intake and exhaust valves, while the crankshaft converts the up-and down motion of the pistons into rotational motion.

Timing belts make sure this mechanical ballet of valves and pistons is always in-sync and things don’t fire at the wrong time. In most automobiles, the timing belt also controls the water pump.

Timing belts do their job via an intricate and sensitive mechanism made up of tensioner pulleys, sprockets, bearings and timing marks. The belt’s teeth are precision molded from a special reinforced rubber compound in order to get uniformity. Uniform spacing and shape is critical for the teeth to mesh exactly with their mating sprockets. High levels of tensile strength (stretch resistance) can be achieved thanks to high strength cords that run in parallel to the timing belt. 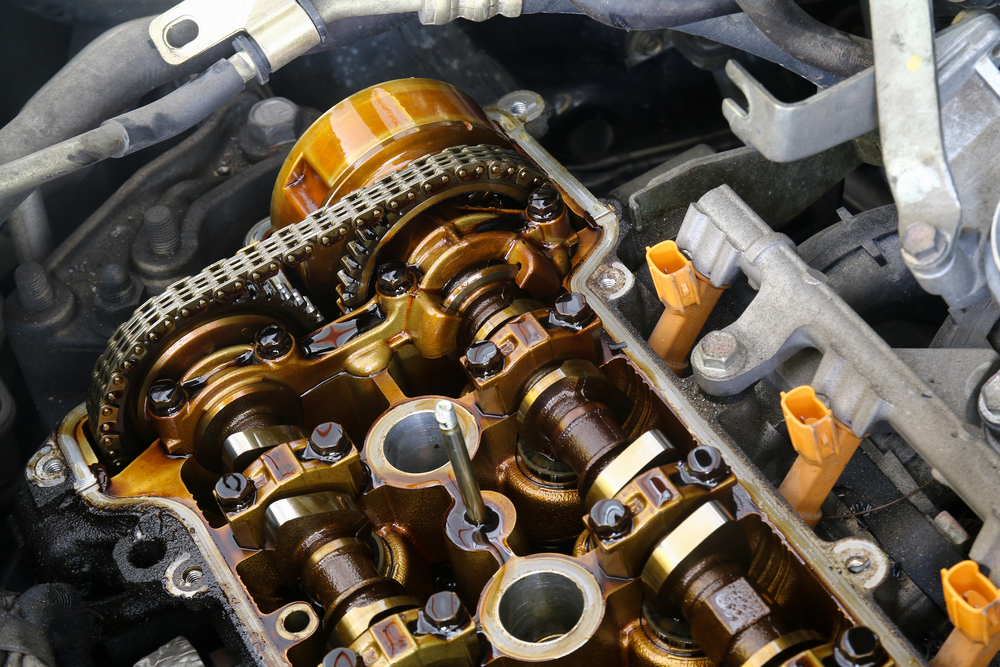 Timing belts are typically made of high-quality rubber with nylon reinforced cords, but a lot of modern car models are equipped with a timing chain made out of metal. Because they are made out of rubber, belts are quieter and less expensive. But in recent years vehicle manufacturers have taken advantage of improved materials to equip their engines with timing chains, delivering far better results in terms of noise and vibration reduction.

Theoretically, timing chains should last the lifetime of the engine, but they have other potential issues as well. If they break, it can cause irreparable damage to the engine and they can be noisier compared to timing belts. Timing chain replacement is quite complicated usually requiring a specialist technician and the price is much more expensive.

To find out if you have a timing chain equipped engine, which may vary from year to year and by auto manufacturer, you can check the OEM repair information manual of your vehicle using services like Alldata to determine what kind of timing operation your vehicle utilizes.

How Long Does a Timing Belt Last?

Timing belts are made of rubber, which naturally wears out over time. Auto mechanics generally recommend replacing the timing belt somewhere between 60,000 to 100,000 miles.

Follow the vehicle manufacturers recommended timeframe to replace the timing belt unless there you see symptoms of timing belt wear and tear beforehand.

When Do You Replace a Timing Belt? 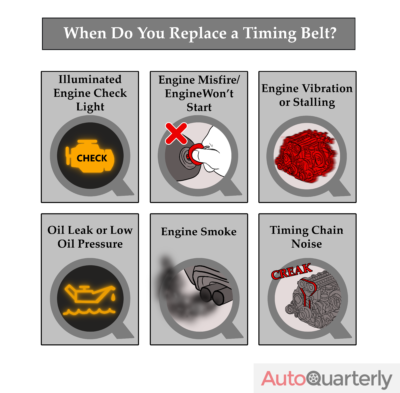 Unfortunately, in most cases the signs that your timing belt is reaching the end of its life are not that obvious. Remember also that while timing belts do snap, they often just slip out of position, as the teeth wear out.

These symptoms could be a sign of a worn out timing belt.

A poorly functioning timing chain will lead to poor engine performance and increased emissions, triggering the check engine light and generating an error code for the service professional

When the teeth on the timing belt get worn out, it can begin to slip, causing the cylinders to open and close at the wrong time. Fuel and air mixture going wrong will result in the engine misfiring.

When the teeth slip and fail to grip the gears it can also impact the camshaft timing, the engine can begin to jolt, vibrate and even stall, even when idling. You may even experience a ticking noise coming from the engine.

As the gears of the camshaft are controlled by the timing belt, incorrect timing will result in pieces breaking off of the camshaft, resulting in low oil pressure or oil leaking out the bottom. When you have your oil changed, and the mechanic finds small pieces of metal inside the drained oil or in the filter, it’s a good indication that your timing chain is beginning to fail.

Since the valves let air in and exhaust gases out of the cylinders, improper timing will cause excessive smoke coming from the exhaust pipe. There could be other reasons for excessive exhaust smoke but it is always a warning sign you should not ignore. When you see excessive smoke or if the smoke is black, get the car inspected immediately.

A timing belt will generally start to produce a high pitched, squeaking, noise before it snaps or slips.

If the belt is not working properly, the engine won’t have enough compression to start until a repair or replacement has been made.

If you see these symptoms go to an auto mechanic immediately, before anything worse happens and you end up with a slipped or broken belt.

What Happens When the Timing Belt Breaks?

When a timing belt breaks, there will be a very large sound heard from the engine as components start to crash into each other or start bending and breaking with the force. The engine will shut off and not be able to restart. Damage will also depend on if you have a noninterference or interference engine.

Only if you are lucky enough to be driving at a low speed and have a noninterference engine, will you get away with minimal damage to the engine. A non-interference type engine design will not result in major damage when the belt breaks, but will still disable the engine from starting.

Consult your owner’s manuals to check what type of engine your car model is equipped with.

Cost to Repair or Replace a Timing Belt

Replacing the timing belt as preventive maintenance means the cost will be within a fairly predictable range. In case of a broken or slipped timing belt, the costs could go higher depending on what parts need to be replaced, the vehicle make and model, and the cost of labor.

Here’s the good news – timing belts themselves are not that expensive. A typical timing belt will only cost only $25 to $50.

The main issue with replacing a timing belt is that most of the expense will be incurred on labor charges. Timing belt replacement requires the technician to disassemble the engine so they can get to the belt.

The auto mechanic will have to take the front engine cover off, so the technician can get to the timing belt. Based on the car’s engine placement, any other components in the way will also need to be removed. Some models might even need the engine itself to be removed.

Labor, which will push the cost up from to anywhere in the range of $300 to $1,000, based on the vehicle type, year and size. For those interested in saving on labor by replacing the belt themselves, here’s a guide from Popular Mechanics.

In general, older models and mass-produced car models will be less expensive when it comes to replacing the timing belt.  Passenger cars with smaller engines are generally less expensive as they are easier to disassemble. Many modern cars tend to have engines fitted snugly inside the engine bay, making the timing belt difficult to access for the mechanic.

Custom made automobiles and luxury cars will often need a specialist mechanic, driving labor charges even higher. If you have a large engine vehicle like an SUV or a V8 engine, expect to pay more for labor costs.

Average timing belt replacement price for a small to midsized car will range from $300 to $600.

You might be in for a large bill for repairing your engine if the belt breaks. The damage to the engine could be so extensive that the cost of repairing is more than the value of the car. Replacing a broken timing belt may cost over $2,000 or more if it also caused damage to the valves, pistons or water pump.

Additional Costs to Expect When Replacing a Timing Belt

Front oil seals also can only be accessed when the timing belt assembly has been disassembled, so these could also be replaced. This shouldn’t cost much more than the cost of parts if you’re already having your timing belt worked on, so expect to pay no more than $100.