So, your car is running a little rough. The engine stutters, takes a long time to start in the morning, and you feel like it might stall at any minute. The check engine light is on and your credit card is already maxed out.

Modern engines are run almost entirely by electronics. The ECU/ECM controls the combustion parameters like the spark timing, the amount of fuel and timing of the fuel injection. This happens in real-time as the road conditions and your driving intent changes.

There are no less than a dozen sensors in every modern engine, one of them being the camshaft position sensor. Just like everything else, these electrical components wear down and fail. This can cause errors in ignition timing, fuel injection, valve operation and even shut down the engine entirely.

But don’t worry—although it’s a fairly complicated repair for the home mechanic, it should only run about $100 in parts and about the same in labor, for a final cost of no more than $300 in most cars.

But before you fix the problem, you need to be sure what it is—so read on to find out everything you need to know to figure out if your camshaft position sensor is the culprit.

What Is a Camshaft Position Sensor?

The camshaft is responsible for operating the valves and dictating how air moves in and out of each cylinder as the four strokes cycle. The lobes on the camshaft are the mechanical programming for when each individual valve opens, how far it travels and how long it stays open, before closing. All of this is synchronized to the crankshaft’s rotation via the timing belt or chain.

Both the camshaft and the crankshaft are equipped with CMP and CKP position sensors, which send information to the ECU about their position, rotational speed and relation to each other. The ECU uses this data to figure out which cylinder should fire next and sends commands to the fuel and ignition systems.

To get it right and deliver smooth engine operation and high efficiency, the ECU needs the precise position of the camshaft and thus the importance of the camshaft position sensor becomes very obvious.

How Many Camshaft Position Sensors Are in My Engine?

Well, that depends entirely on the engine. A modern electronically controlled engine has at least one position sensor per camshaft.

If you have an economy inline four cylinder engine, you probably have one camshaft and one position sensor.

If you have a performance-oriented dual overhead camshaft design, you’ve got a camshaft for the intake valves and a separate one for the exhaust valves, each with its own position sensor.

And finally, there’s variable valve technology, which allows the camshaft to offset it’s position relative to the crank or change the geometry of the lobes, reprogramming the operation of the valves. Most of these systems add a specialized sensor to monitor the offset cam position in addition to the standard camshaft position sensor.

As we wander off into the world of exotic supercars and state of the art engines, you could be looking at 8 and more separate camshaft sensors, at which point you probably want to forgo the thoughts of DIY repairs.

The camshaft position sensor will live at the front or back of your camshaft. Depending on the engine, the camshaft can be in the head or integrated into the block.

If it’s in the block, the CMP is either at the back end, or underneath the timing cover, which can be harder to get to.

If you have an overhead camshaft, look for the black plastic dongle (for lack of a better word) that plugs into the front or rear of your cylinder head. It’s going to have a connector with two or three wires going to the ECU and it’s usually mounted with a single 10mm bolt.

There are two common types of camshaft position sensors – magnetic or inductive sensors and Hall effect sensors. Either sensor is pointed towards a gear-like section of the camshaft. As the individual teeth pass in front of the sensor, it produces a wave signal whose peaks and valleys correspond to the tips and roots of the teeth. By interpreting the frequency of the wave, the ECU can determine the rotational speed of the camshaft, as well as its position relative to the crankshaft.

You’ll recognize the magnetic (a.k.a induction) CMP via the two wires showing from its connector – a ground and a signal.

It features a permanent magnet, a coil and a pole pin. As the teeth of the camshaft pass near the pin, the magnetic field around the coil changes and produces alternating current with a distinctive sinusoidal wave.

You can see this wave by connecting an oscilloscope or a graphical multimeter to the signal wire and crank the engine. The voltage of the signal will differ, but expect to see 1 to 2 volts.

You’ll recognize the Hall effect sensor via the three wires showing from its connector – power supply, signal and ground.

The Hall effect sensor features a permanent magnet and a thin strip of metal to which the power supply from the battery and signal wires are attached. As the camshaft remains stationary, the supply voltage passes unimpeded and you will read a constant value – usually 5V or 12V (battery voltage) for most cars.

When the camshaft rotates, the teeth will pass close to the sensor and will alter the magnetic field, influencing the flow of electricity through the strip, causing the signal to change. A Hall effect sensor will produce a square wave with constant amplitude and frequency proportional to the rotational speed of the camshaft. 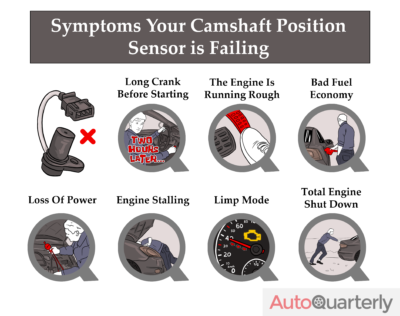 Because the camshaft is such a critical part of the engine, a failing sensor can throw out a myriad of symptoms at you.

Here are some of the most common ones:

As you see, the camshaft position sensor can cause most major engine problems you can think of. Unfortunately, there are a dozen other reasons why your engine could be experiencing the same issues.

Diagnosing and servicing the camshaft position sensor isn’t difficult for a professional mechanic, but it’s more complicated than it’s worth for most home mechanics.

As far as the cost of parts, you’re looking at $30 to $100 dollars for the camshaft position sensor. If you have a luxury vehicle, these can grow more expensive, but tend to max out at around $300.

A repair shop will charge you around $100 to $200 for diagnosing and replacing the sensor. The bill can grow quickly if the problem stems from the wiring, or if other engine problems are contributing, but if the only issue is the camshaft position sensor you should leave the repair shop with a bill under $500 in almost every case.

If you do want to dabble in electrical troubleshooting and repairs, grab yourself a copy of the service manual for your vehicle. It will contain step by step instructions on how to locate, identify and diagnose a faulty camshaft position sensor, providing you with much-needed wiring diagrams and other helpful information.

If the ECU cannot pick up a signal from the CMP, or the signal doesn’t make any sense, it will throw a “Check Engine” light on the dash and throw an error code.

Scan With an OBD II Tool

Plug an OBD scanner into the computer and read the error codes.

If your car only has one camshaft and one position sensor, you will get one of the following engine error codes:

For V-style engines, there’s an equivalent series of codes for the second cylinder bank.

Inspect and Clean the CMP

Armed with your error codes, it’s time to pop up the hood and take a look at what’s going on. Locate the sensor according to your service manual and inspect the wires for signs of damage.

Pull the connector off and inspect the terminals for corrosion or contamination. If you do notice any, carefully scrape away the terminals clean and blast them with an electrical cleaning spray. Then dry it off, reconnect it, and see if that changes anything.

Obviously, any cut or burned wires between the ECU and camshaft position sensor can be causing the signal loss, so next you’ll need to trace the connection and inspect for problems. If there’s nothing out of the ordinary, check whether you can easily remove the CMP. If you have easy access, take the sensor out and inspect for damage.

There may be metal shavings on the end pointing at the camshaft since the CMP contains a magnet which, just like your oil drain plug, will collect fine metal shavings from the oil. If the shavings are in a paste-like consistency, don’t be startled by this discovery. It’s normal for engine parts to wear over time and if the sensor has never been replaced, it’s been collecting them since the very first crank over. If you do find any significant chunks, you should investigate further on what the cause might be.

Regardless, you should then clean the sensor with some spray, reinstall it and see whether the engine won’t recognize a healthy signal.

Alright, if none of the “turn it off and back on again” troubleshooting helps, it’s time to verify if the problem is actually coming off the sensor or the wiring to the ECU.

If you get P0342 through P0344 codes, you should perform a resistance test.

Disconnect the CMP from the ECU. Set your multimeter to measure resistance and attach the probes to the power (red) and ground (black) wires.

If you get any other resistance value, check against your service manual if it falls in the appropriate resistance ranges. If it doesn’t fall into the proper range, replace the camshaft position sensor.

If you can’t find a problem with the resistance of the sensor, proceed to the next test.

You really want an oscilloscope for this test, as it’s the only instrument which will produce a precise measurement.

Leave the sensor installed and connected to the ECU. Next, carefully insert a pin probe into the signal wire of the CMP. Make sure you don’t rip out the insulation or damage the wire.

On your oscilloscope, connect your power clip to the probe and the ground clip to any ground or metal in the engine bay. Crank the engine and see whether you have a wave signal – sinusoidal for magnetic, and square for hall-effect sensors.

If you don’t get a wave signal, you’re looking at a faulty camshaft position sensor and you should replace it.

If you don’t have an oscilloscope or a graphical multimeter, here’s an awesome guide to get the measurement with a multimeter by BAT Auto Technical.

If you have performed all of these tests and have validated your camshaft position sensor works properly, the reason for your misery lies in the wiring. Somewhere in the engine bay a wire or a connector has gone off, leaving your engine in dismay.

If that’s the case, your only route is to methodically test each wiring space from connector to connector.

Though most people will probably want to pay a professional to fix their failing camshaft position sensor, it is a repair that some experienced home mechanics will be able to handle. Whatever it is you choose, make sure you do it as soon as possible after noticing symptoms, as a camshaft position sensor failure can have disastrous consequences on the road.