Home › Knowledge Base › The Difference Between Diesel and Gasoline Engine

One of the first things new drivers are taught is to never put the wrong kind of fuel into their vehicle. It’s generally understood that putting diesel fuel into a gasoline engine or gasoline into a diesel engine is a big no-no. But why exactly is that the case?

Why Is It Bad to Use the Wrong Kind of Fuel?

To answer this question, we’re going to have to get our hands a little greasy and dig down into how car engines work. Diesel engines and gasoline engines are quite similar in a lot of ways. They’re both internal combustion engines (ICEs) that essentially utilize controlled explosions to drive pistons inside the engine.

In fact, when your engine is running, it’s creating hundreds of explosions every minute. This process is achieved in both gasoline and diesel engines through the use of a four-stroke combustion cycle that converts energy from those explosions into motion for your car.

The four-stroke combustion cycle is also known as the Otto cycle, named after Nikolaus Otto, the original inventor of the process back in 1867. The cycle, as the name suggests, involves four separate “strokes”: the intake stroke, the compression stroke, the combustion stroke, and the exhaust stroke.

This animation from HowStuffWorks.com shows the entire combustion cycle from inside the engine.

The Differences Between Gasoline Engines and Diesel Engines 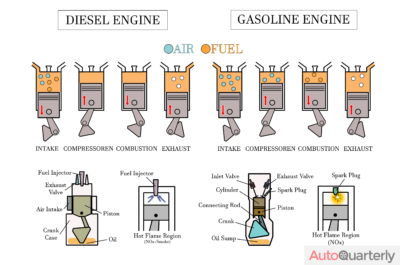 Diesel engines, on the other hand, can’t use spark plugs due to diesel’s higher flash point (the temperature that must be reached to ignite the substance). Instead of spark plugs, diesel engines inject super-compressed (and therefore superheated) diesel fuel into the cylinder to cause combustion.

Why it’s bad to put diesel fuel into gasoline engines

This difference is essential for understanding why it’s bad to put diesel into a gasoline engine and vice versa. Diesel fuel doesn’t work properly inside of a gasoline engine because diesel fuel requires a hotter source of ignition than the gasoline engine’s spark plug can output. The result of putting gasoline into a diesel engine is an engine that will sputter and lose power, or even fail to start altogether.

Why it’s bad to put gasoline fuel into diesel engines

On the other hand, the result of putting standard gasoline into a diesel engine can be much more problematic. As we mentioned, diesel fuel has a much higher flash point than gasoline, which is why diesel engines use an alternative (and hotter) method for combusting its fuel.

Gasoline inside a diesel engine can combust when it’s not supposed to due to its significantly lower flashpoint in comparison. Gasoline fuel could potentially get hot enough inside the fuel tank to combust outside of the controlled environment within the cylinders of the engine. However, the problems don’t end there. There is another important difference between diesel fuel and gasoline fuel: lubrication.

Diesel fuel has an inherently high lubricity profile (this means it’s very slick), while gasoline fuel does not. Diesel engines use fuel injection instead of spark plugs, and those injectors and the pumps that bring fuel to them can get damaged by the presence of un-lubricated standard gasoline fuel inside them.

The result can be catastrophic engine failure for diesel engines. Repair costs for putting the wrong type of gasoline into an engine can be extremely high. This video from Fifth Gear shows an experiment with putting the wrong fuel into different engines, and shows some real-world impacts of misfuelling.

What Other Differences Are There Between Gasoline and Diesel Engines?

There are a few practical differences between diesel and gasoline engines regarding the desirability of ownership.

It wasn’t too long ago that diesel fuel was cheaper than gasoline. This is no longer the case, as the price difference is fairly negligible. The main deciding factor for relative fuel economy when comparing gasoline and diesel engines is that diesel engines are typically rated for more miles per gallon (MPG) than their gasoline counterparts.

This means diesel cars are the better option in terms of absolute fuel economy. A gallon of diesel fuel provides roughly 30% more energy than the same amount of gasoline. This difference in fuel efficiency is most easily seen when driving long distances. City driving narrows this gap a fair bit, but there is still some difference.

Another category in which diesel engines have a leg up on gasoline engines is the potential for alternative fuel types. Diesel engines can run off all sorts of different types of fuel that you won’t find at the pumps of your local gas station.

The four primary alternative fuels are biodiesel (fuel made from a combination of various resources, often from recycled products), Fischer-Tropsch (F-T) diesel, dimethyl ether (DME), and vegetable oils. That’s right, vegetable oils, like the kind you use for cooking, can be used by diesel engines. Some of the best vegetable oils for use as alternative fuel sources are soybean oil, sunflower oil, peanut oil, olive oil, and palm oil.

This article doesn’t cover every difference between gasoline and diesel engines, but it should provide you with enough knowledge to get a handle on the basics. If you’d like to get down into the nitty-gritty details of how a diesel engine works compared to a gasoline engine, this video from the Engineering Explained YouTube channel goes into greater detail.