Home › Knowledge Base › The Main Parts of Car Engine

Most of us have a car, but surprisingly few of us know what’s going on under its hood! Many have no idea how to fill up their water reservoir or check their engine oil levels, never mind find their way around the main engine components.

Everyone should be informed about what happens in their vehicle’s engine. That way, you have a better understanding of how your car works and, should it break down, you’ll have a better idea of what could be causing the problem.

With this in mind, we ask an expert “what are the main parts of a car engine?”

How Does a Car Engine Work? 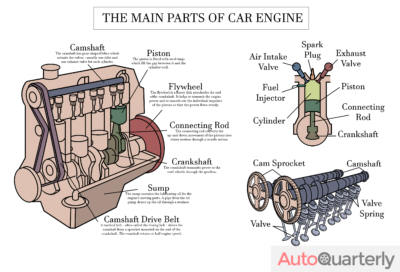 Before we even start looking at the different components of your car’s engine, let’s first take a look at how the engine works. This will help you to visualize each part and to understand the role that it has to play in making your car move.

An engine’s primary purpose is to turn fuel into movement. This is achieved by burning fuel within a small, enclosed space known as the “internal combustion engine”. When fuel is burned, it creates gases. These take up a lot more room that the fuel did. When this happens in the enclosed space of the car cylinder, pressure is created, and this pressure is then converted into movement. When this happens repeatedly, as often as hundreds of times every minute, this movement is capable of propelling something heavy such as a truck or a car.

Virtually every car currently uses something called the “four-stroke combustion cycle”.
The four strokes referred to are:

Now that you understand a little better how a car engine works, it’s time to look more closely at various parts and components that allow it to function.

At the core of your car’s engine is its cylinder. Inside it, the piston will move up and down. You can find cylinder engines in other types of machinery such as lawnmowers, which are most likely to have a single-cylinder engine rather than a multi-cylindered engine that is found in a car or truck. Virtually all cars have either four, six or eight cylinders, and these are arranged typically in one of three different ways: flat (opposite each other horizontally), v (at angles to each other) or inline (in one single row).

Each configuration comes with its own pros and cons in terms of shape, manufacturing costs, and smoothness. The advantages and disadvantages each of them provide make them suitable for specific types of vehicles.

As you might imagine from their name, spark plugs are required to supply the essential spark to ignite the mixture of fuel and air, allowing combustion to take place. It’s imperative that the spark happens at the perfect moment to allow the engine to function properly.

The engine has both exhaust and intake valves which must open at the right time to allow fuel and air to enter the engine and to allow the exhaust fumes to escape. It’s important to note that both the intake and exhaust valves will be closed during both combustion and compression to ensure that the combustion chamber remains sealed.

The piston is a piece of metal in a cylindrical shape. It moves down and up inside the cylinder of the engine to compress the fuel and air. The piston’s role is to send the energy that combustion creates to the crankshaft in order to move the vehicle. The pistons will travel down and up inside the cylinder twice for every crankshaft rotation, so the pistons on an engine rotating at 1250RPM travel up and down 2500 times each minute.

Piston rings are essential since they provide a sliding seal that seals the piston’s outer edge and the cylinder’s inner edge. As a result, the keep the fuel and air mixture as well as the exhaust fumes safely inside the combustion chamber and prevents them from leaking out into the sump in the combustion and compression stages of the process.

Piston rings are also essential to prevent the leakage of oil from the sump – which is the base of the internal combustion engine – into the cylinder’s combustion area where it would end up being burned up and then lost. If you have a vehicle that constantly needs to have its oil levels topped up, it could be because the car’s engine is now old, so its piston rings are no longer capable of sealing it properly.

Most modern vehicles now use more advanced materials to make their piston rings and this is a key reason why today’s engines are capable of lasting longer and going for longer between each oil change.

Your car’s crankshaft will be found in its engine block’s lower section. If you imagine the crank that you’d find on a classic jack-in-the-box toy, you will have a fair idea of what a vehicle’s crankshaft looks like. It functions in the same way too, converting the up and down piston motion into a circular motion.

The camshaft will vary between different vehicles, being located either in the cylinder heads (which is the case for most modern cars) or inside the engine block itself. The camshaft’s role is to regulate the valves’ closing and opening timing while taking the crankshaft’s rotary motion and converting it into an upwards and downwards motion so it can control the lifters’ movement and move the valves, rockers and pushrods.

The engine’s connecting rod is necessary to connect the crankshaft to the piston. It’s capable of rotating at each end, allowing its angle to change when the crankshaft rotates and the piston moves.

The sump is the area surrounding the crankshaft which contains oil. The oil will collect in the oil pan – the area at the bottom of the sump. When your vehicle has old piston rings, the oil in the oil pan may leak out into the engine’s cylinder.

The cylinder head is attached via cylinder bolts to the car’s engine and is sealed with a head gasket. There are many items contained inside the cylinder head including the valves, valve springs, lifters, rockers, camshafts and pushrods. These control the passages that enable intake air to flow into the cylinders during the intake stroke stage of the process as well as the passages that allow exhaust gases to be removed during the exhaust stroke stage of the process.

The Timing Belt or Chain

The crankshaft and camshaft are perfectly synchronized to allow for the essential precise timing that allows the car’s engine to function properly. The timing belt is made from a heavy-duty rubber that has cogs on it that lets it cling tightly to the pulleys from the crankshaft and camshaft. Some vehicles have a timing chain instead of a timing belt. This looks similar to a bicycle chain and works by wrapping around the pulleys with its teeth.

Now you know the answer to the question “what are the main parts of a car engine,” it would be helpful to be aware of some of the potential problems that can arise when one of those components breaks down.

As there are a lot of mechanisms inside a car engine, it’s inevitable that wear and tear will occur over time. Some common issues that can occur in your car’s engine include:

While your car engine may appear to be complex, its task is really simple – moving your car forwards. However, since it contains a lot of components that all need to work in synchronization to create motion, it couldn’t be more important that your vehicle is regularly maintained to keep it in good working order.