Several symptoms may indicate that the A/C expansion valve is not working correctly. Below, we will be discussing these symptoms, in addition to letting you know exactly how your A/C expansion valve works and how much you can expect to pay for a repair of this part.

How Your A/C Expansion Valve Works

In order to control the refrigerant flow, there is a rod located on the inside of the A/C expansion valve. The rod is what moves up and down, opening and closing the path for the refrigerant to move. The valve will calculate how much refrigerant is needed and allow it to flow through the passageway easily. 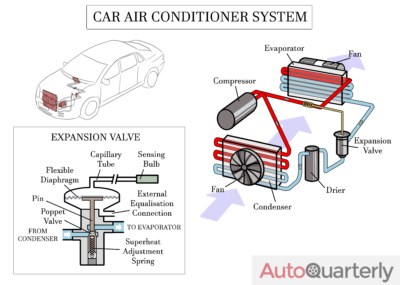 You may experience one or more of these symptoms as a result of a faulty A/C expansion valve. If you believe that you have a serious problem with your air conditioning system, don’t hesitate to take your car to a professional before the issue becomes worse.

One of the most noticeable symptoms of a faulty A/C expansion valve is poor air conditioning performance. This may include things such as the airflow note being as cool as you have previously been used to, the A/C taking a long time to start blowing cool air, or the A/C blowing out warm air and cool air in turns.

These issues typically indicate a lack of refrigerant getting to the evaporator core, which can be caused by a faulty expansion valve.

If your air conditioner is running constantly, it could be caused by the expansion valve getting stuck open. When the valve is open, it will allow refrigerant to flow into the evaporator core without a break, resulting in constant cold air. Over time, this can cause damage or freezing to the evaporator core.

Airflow that is constantly moving between hot and cold no matter what you have your car’s temperature settings on means that the expansion valve is not measuring and calculating refrigerant levels properly. It could be stuck open or just not opening and closing properly, but either way, this issue needs to be fixed if you want to be able to control your car’s temperature settings properly.

Too much refrigerant flowing into your A/C system’s evaporator core will result in eventual freezing. This can cause frost to start forming the air vents in the interior of your vehicle. If you notice this symptom, you should be taking your car to a professional as soon as possible to prevent further damage.

Warm air being released from your car’s vents no matter what typically indicates that there is not enough refrigerant getting to your car’s evaporator core. Besides blasting warm air and making your car uncomfortable, this could also cause overheating of the evaporator core which may increase your repair and replacement costs.

Fortunately, the replacement cost for a faulty A/C expansion valve is not too expensive. This part can be easily replaced by most local mechanics and does not take a lot of time to repair.

Depending on the make and model of your car, you may end up paying between $50 and $100 for replacement parts, while labor will cost you between $100 and $200 per hour (usually only an hour’s worth of labor is needed). This comes to an average cost of between $150 and $350 for the replacement of the A/C expansion valve.

It is important to note, however, that you may end up paying more if your expansion valve has been broken for a long time and you are just getting around to fixing it.

You should also keep in mind that visiting a local mechanic will likely give you cheaper prices than taking your car to be repaired at a dealership would.

Can You Replace Your A/C Expansion Valve at Home?

If you have a little bit of experience with cars, you may be able to replace your A/C expansion valve at home. This DIY project does require the full evacuation of the air conditioning system, a new expansion valve part, and the time to complete the replacement. If you are confident in your skills, you may be able to save on labor costs and only pay the upfront cost for replacement parts by fixing your A/C yourself.

You can check out this article for more information on DIY replacing your A/C expansion valve at home.

A faulty A/C expansion valve can be inconvenient and cause uncomfortable temperatures in your car, but this part is easily fixable. Plus, as long as you catch the problem in time, there is not too much of a risk of long-term damage to your air conditioning system.

Once you’ve used our guide of symptoms to narrow down your problem, visit a local mechanic to get your A/C issues fully evaluated and properly repaired so you can ensure your car always maintains the right temperature.