Over time, the joints and components on your car loosen or wear out. When the components that hold the wheels on fall out of tolerance, it can make your car handle poorly or wear your tires out much quicker. To fix the problem, all cars have adjustable components that allow you to adjust the alignment of the wheels.

There are three main properties centered around wheel alignment: toe, camber, and caster. In this article, we’ll be looking at caster. Bad caster won’t ruin your tires like other bad adjustments will, but it is important for how your car feels on the road.

Traditional steering systems have a top pivot and a bottom pivot. The lower control arm holds the hub, and then an upper component pulls or pushes the inside of the wheel to introduce steering angle. If you draw a line between the two points, the angle of that line to the road is the caster.

Often, it’s easier to understand as a visual. In the following picture, you can see the bottom of the bottom pivot point right below the wheel center and the top pivot on top of the strut (the blue and red spring assembly, you can learn more about these parts here). There are different types of suspension and steering assemblies, so your car may look very different than the diagram when the wheel is removed, but the general principle still applies. 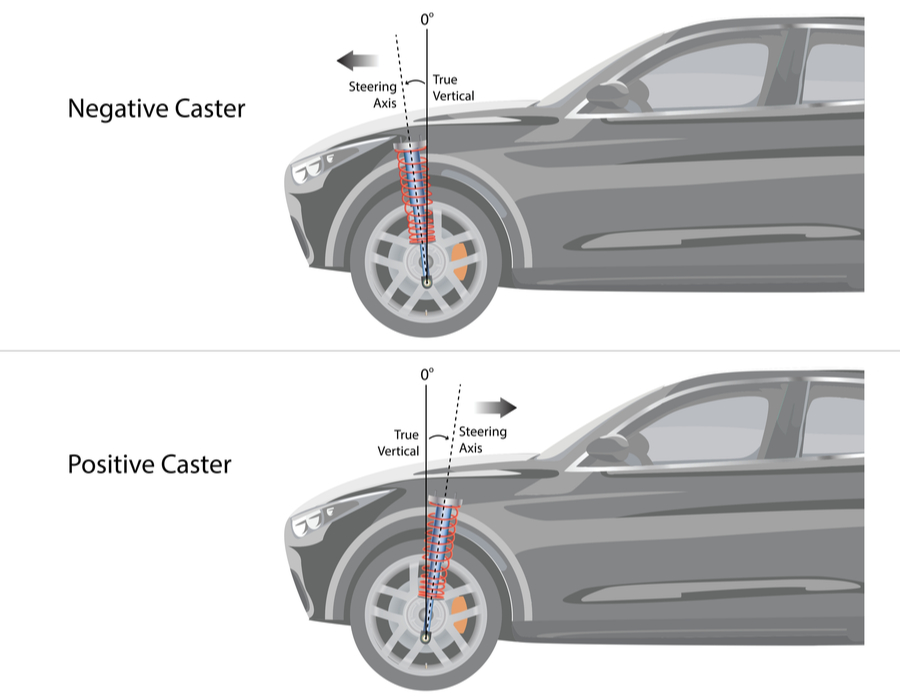 Unlike camber and toe, which are frequently adjusted, caster is usually only adjusted if it exceeds manufacturer recommendations. On some vehicles, especially much cheaper vehicles, it may not be possible to adjust caster at all.

Caster angle primarily affects a car’s steering feel. A car with more positive caster angle will be harder to turn than a car with less positive angle. That is often desirable for two reasons. The first is that the stiffer feeling means it’s easier for the car to realign after cornering. The steering wheel returns to center faster, which leads to increased safety.

The second reason is that it increases traction in a corner. Sports cars, or other cars that are expected to be driven with more enthusiasm, often have higher amounts of positive caster so that they stay more planted in the turns.

To understand how caster affects a car’s ability to straighten out, imagine pushing a shopping cart or rolling an office chair. When you push a cart or chair, all the castering wheels align with the direction you are pushing.

Your car is the same way. As you accelerate, the wheels want to naturally align themselves with the forward momentum. Most cars have fixed rear wheels, so the front wheels are the only ones that can turn. When you increase the caster on the front wheels, they want to return to center faster, which makes controlling the car easier. If you look at shopping carts, you’ll notice that the front caster wheels have a lot of positive angle for the same reason.

Chances are it will go every direction except straight because the wheels won’t be able to align with the force. They will lead instead of trailing like they are supposed to. As you can imagine, that’s not a desirable way to drive a car.

You see, as the car goes into a turn, the angle of the tire to the road changes, and the contact patch gets smaller. Negative camber increases the amount of tire touching the road when you corner, and that increased surface area makes a car stick to the corner better.

However, if you have a lot of negative camber, your tires will wear down much more quickly. By having positive caster, you will actually have better tire wear because you’ll be flat when going straight and when in the corners.

Positive caster keeps a car more stable when going in a straight line for the same reason it returns to center after a corner. If we go back to the shopping car analogy, you can easily visualize the reason. As you push the cart forward, it wants to travel in a straight line and resists turning because the wheels want to remain aligned with the direction of the force.

However, there’s another benefit to positive caster. By making the steering input less sensitive and therefore harder to turn the car, you smooth out your ride.

Instead, with a positive caster, the steering system can absorb all those road imperfections without moving the car around. On a long stretch of highway, that means you don’t have to make constant corrections to stay on the road.

Caster does not change the rate of tire wear as much as camber or toe. However, there is an issue that can occur if the caster is too far out of adjustment or uneven. The issue is called feathering, and although it’s not as common as other wear issues, it can cause some discomfort on the road.

Feathering can make a tire look like it has gills. When you look across the top of the tread, it should be even; all the tread blocks should be the same height. When a tire experiences excessive feathering, the tread will look jagged. This website has pictures of various types of tire wear if you would like to see it.

The biggest problem with feathering is that it can harm a tire’s ability to expel water. It’s certainly not the worst thing that can happen to a tire, but you will need to replace them sooner than a tire without feathering.

When to Adjust Caster

There are two main ways to know it’s time to adjust the caster. The first is the simplest; your service schedule will have recommended intervals for checking and adjusting your alignment. Your caster will be adjusted to spec every time you have an alignment done.

The second way to know it’s time to adjust caster is when you notice your car misbehaving. If you have some excessive wandering on the highway or have trouble straightening out after a corner, you may want to have your caster checked. Generally, your other alignment adjustments will need servicing long before the caster, so it’s unlikely that you’ll notice caster wear exclusively.

Maximize Your Handling with Positivity

Being positive is more than just a mindset. It’s a great way to keep your car stable and fast through the corners. Caster may not be the first thing you think of when you think of tire alignment, but next time you pick out a shopping cart, pay attention to how the front wheels behave. An erratic cart can ruin your day; don’t let your car behave the same way.