If you have ever spent time around people who like to talk about cars, you’ve heard them talk about some mythical thing called the “Macpherson Strut.” Often, it’s followed by the words “great handling” and “upgrade.”

But what is a Macpherson Strut? Fundamentally, it’s a suspension part that connects directly to the wheel on most modern vehicles.

While we know it’s part of a popular suspension design, there’s a lot more to it. First, we’ll give you a run-down of what a car’s suspension even does. Then we’ll explain the suspension components and how they fit into different suspension systems.

It’s only after we explain all that can we talk about what the Macpherson Strut really is. Unfortunately, they won’t make much sense unless you understand the rest of it.

What Does the Suspension Do?

If you didn’t have suspension, you would lose your teeth every time you hit a pebble. Suspension does a lot more than just smooth out your ride, though. Your suspension system is responsible for three main things.

When you accelerate, turn, or stop, the vehicle’s weight gets transferred to the back, sides, and front, respectively. Your suspension can compress when the weight is shifted onto it and expand when the weight is removed. That keeps your car level during normal driving and prevents things like rollovers and wheelies.

You can do a quick experiment that will really help you understand this aspect. Simply try to stand on a hillside with both your legs completely straight, and try not to fall over. That’s what it would be like with no suspension. By bending one leg so that you can stand perpendicular to gravity rather than the hill, you transfer your weight to a more stable location and don’t fall down. That’s how suspension works.

If the suspension only kept your wheels planted, you would have a bad time because every imperfection on the road would be transmitted directly into your spine. To protect your health, the suspension has to make sacrifices in stability and grip.

It does that by controlling the rate the springs work at and transferring the direction of the energy to something more comfortable. Instead of popping you into the air when you hit a speed bump, then slamming you down after, the suspension quickly absorbs the shock and let you down gently.

Parts of the Suspension System 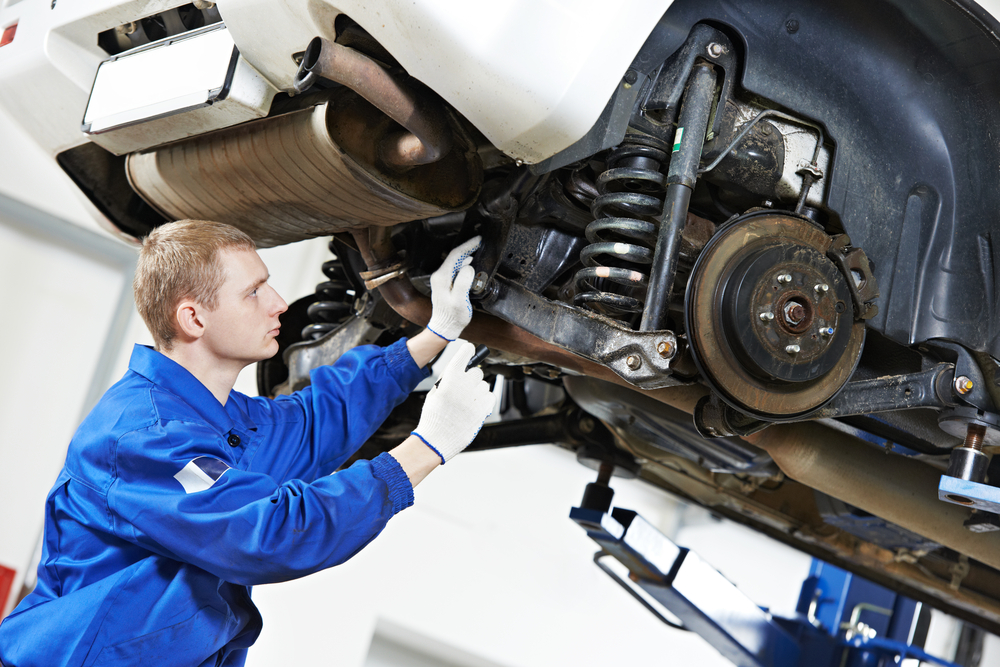 We need to start with a disclaimer; there are many different suspension systems, and more are being invented every day. Some systems might be missing some of these components, and some systems will have parts that none of us have ever heard of before.

In general, there are seven main components of a suspension system.

Springs allow the wheels and tires to move around but then return to their previous location. They resist change, and they are what let the suspension system absorb bumps and other motions.

Springs come in three main flavors. You can click on each one to be taken as an example.

Springs need a damper, or they will return to their original shape quickly and make you bounce up and down. If you’re curious what zero-dampening looks like, think about a pogo stick. To stop that from happening, suspension systems have dampers that force the spring to compress and return slowly.

The most common style, found in over 90% of vehicles, is called the shock absorber. It’s a fluid-filled tube that’s attached to the wheel and the frame of the car. Inside the tube is a piston with holes in it. As the piston pushes through the fluid, it can only travel at a slow speed because the holes only allow so much fluid to pass.

A strut is simply a shock absorber that is mounted inside a coil spring. It’s the first ingredient of the Macpherson Strut. Struts save a lot of space compared to separate springs and dampers, but they are more complicated to service and usually cost more.

These are also called Coilovers because it’s a coil spring over a damper. Often, the first upgrade that a person will do to their suspension is replacing the factory Coilover with a more adjustable or stiffer one. That usually translates to a lower ride height and better handling in the corners.

Hubs are simply the word we use to describe the component that the wheel bolts to. They can be powered or unpowered. Most vehicles power the hubs with a driveshaft. Electric cars, though, can have hubs that are also electric motors. That keeps the entire system very compact and eliminates the need to transfer power from one location to another.

Your tires are a vital part of the car’s suspension. The air in the tire acts as a spring. It can compress with weight and expand to fill the volume when the weight is removed. The amount of rubber, air, and metal that make up your wheel all affect how bumps on the road are absorbed.

The size can make a big difference too. Imagine running over a pencil on a skateboard vs. running over the same pencil on a bicycle. It will bring the skateboard to a stop, but you wouldn’t notice on the bike. Those same ideas apply to cars. Bigger wheels and tires will be able to handle bigger bumps more smoothly than smaller tires can.

Sway is what happens when you turn your car, and it rolls from one side to the other. That body roll is bad because it lowers your grip as the car rolls and lifts one side off the road. It’s also uncomfortable. Excessive sway can make you feel like you are on a boat facing rough seas.

An anti-sway bar is a bar that helps prevent body roll. It’s just a bar that links your car’s two sides together and stiffens up the body. The trade-off is that your car will have a harder time absorbing bumps and jiggles if it’s stiffer.

There are two main ways that vehicles are constructed. The body on frame vehicles were very common until the 1970s, but now they are almost only found on larger trucks and SUVs. They have a body that is mounted to a structural frame. Unibody cars, by contrast, combine the body and the frame into one component. You can watch this video if you want a more in-depth understanding of both and how they compare.

When we are talking about suspension, we simply refer to the vehicle’s structural component as the frame. Frames can bend and flex to absorb bumps, and they can be designed to provide mounting for different kinds of suspension systems.

The last thing that needs to be touched on when describing suspension components is the joints, bushings, and bearings that hold the whole thing together. The bushings especially help absorb vibration and minor shock. When they go out, it can cause major differences in how a car handles on the road.

Now that you know what the parts of a suspension system are, it’s time to learn about the different types of suspension. There are two main categories with a handful of different systems that fit into one of the two categories.

If you want a good visual recap of all the parts and types, watch this video. It does an excellent job talking about suspension and uses animations to show concepts, which is really helpful. We know that suspension is confusing. We work with it, and it’s still confusing sometimes. Don’t feel bad if you are reading this and need to look things up.

If two wheels are linked by a solid member, the suspension is dependent. What that means is that if one side hits a big rock, it will affect the other side. There are two common types of dependent suspensions.

A solid axle suspension system is very straightforward. There’s a big, solid-axle that connects the two wheels together. It can be front or rear, and it can use leaf springs or coil springs.

Axles can be live or dead. A live axle has power running through it and is moving the wheels, while a dead axle is simply a bar that the wheels bolt to.

Also known as A-arm suspension, the double-wishbone suspension uses two wishbone-shaped components to hold a hub. The spring is attached to the frame and the lower control arm, and the upper control arm can be adjusted to change things like toe and camber.

They take up less vertical space than other types and offer a lot of control over the geometry and rates. This type of suspension is usually found on high-performance cars and cars that don’t need to save space.

The Macpherson Strut uses a strut, which is a spring and a damper in one, as a structural component. The hub is connected to a lower A-arm, but there is no upper A-arm. Instead, the strut connects the hub to the frame directly, which allows the entire assembly to rotate with the steering.

Strut style suspension takes up more room vertically than wishbone suspension but takes up a lot less room horizontally. That’s really important for front-wheel drive cars since the engine takes up most of the horizontal space upfront.

In-Depth on the Macpherson Strut 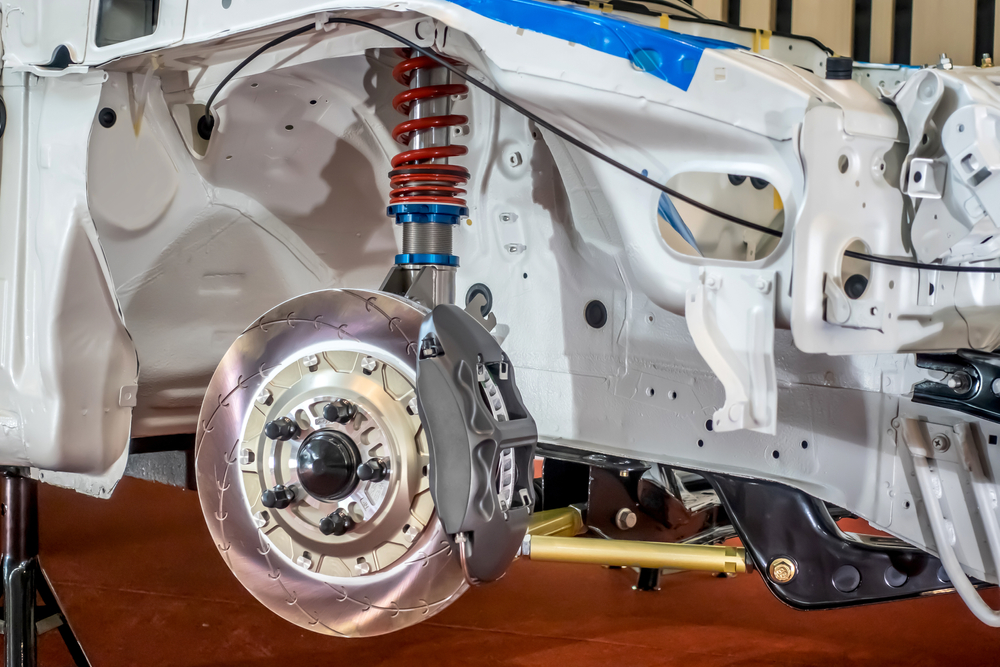 There are a variety of advantages and disadvantages to the Macpherson Strut design.

Macpherson Struts are easily the most common style of suspension on the road. You can find them used for the front of almost every front-wheel drive car on the market because of how well they can be packaged around a motor.

However, they are also very commonly used on rear-wheel drive vehicles as well, and as the rear suspension on most smaller, compact cars. That’s actually what they were designed for.

The first Macpherson Struts were used in the 1940s, which means that every manufacturer has their own take on the design since then. Some variants include the Revoknuckle, which uses two struts instead of one, and the dual-axis strut used on the Civic Type R to counter torque steer.

Your suspension is responsible for how your car feels. Do you like to float on a cloud, or do you want to be planted in the corners? Do you like rock crawling? Or would you rather scrape the ground? We hope that this quick look into suspension systems, and specifically the nearly universal Macpherson Strut, will help you understand and appreciate these crazy complicated systems.