Home › Knowledge Base › Why Is My Car Shaking When Stopped?

Your car should be still when stopped; if it is shaking excessively (more than a slight rumble or vibration), you have a problem. Besides being annoying, a shaking car can be a sign of a more serious issue — one you’ll want to sort out quickly before it creates an even bigger problem.

Your car can shake and vibrate for several reasons, from having a loose hose to having a faulty sensor, or something as serious as needing a transmission replacement. In this article, we’ll cover the eight most common things that cause a car to shake when stopped and look at how you can solve the issue.

Can I Still Drive My Car if It’s Shaking?

The answer to this question depends on what’s causing the shaking. If it’s caused by something minor like a dirty air filter, there’s no real long-term risk to your car if you continue to drive.

However, if it’s caused by something more serious, like a clogged fuel filter, you run the risk of your car conking out while you’re driving. That could be pretty dangerous if you’re cruising down the highway, and can cause personal safety risks as well as damage to your vehicle.

If you don’t know what’s causing the shaking, we’d err on the side of caution and park up until you get the problem fixed. Continuing to drive could result in unnecessary damage to your engine and end up costing you a lot of money.

Common Causes of Your Car Shaking When Stopped 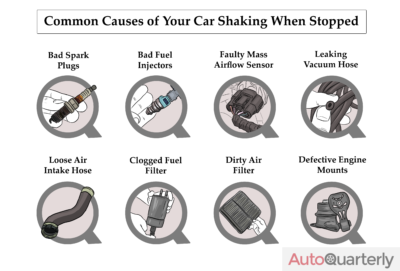 Several issues can contribute to your car shaking when stopped. Below are eight of the most common causes. 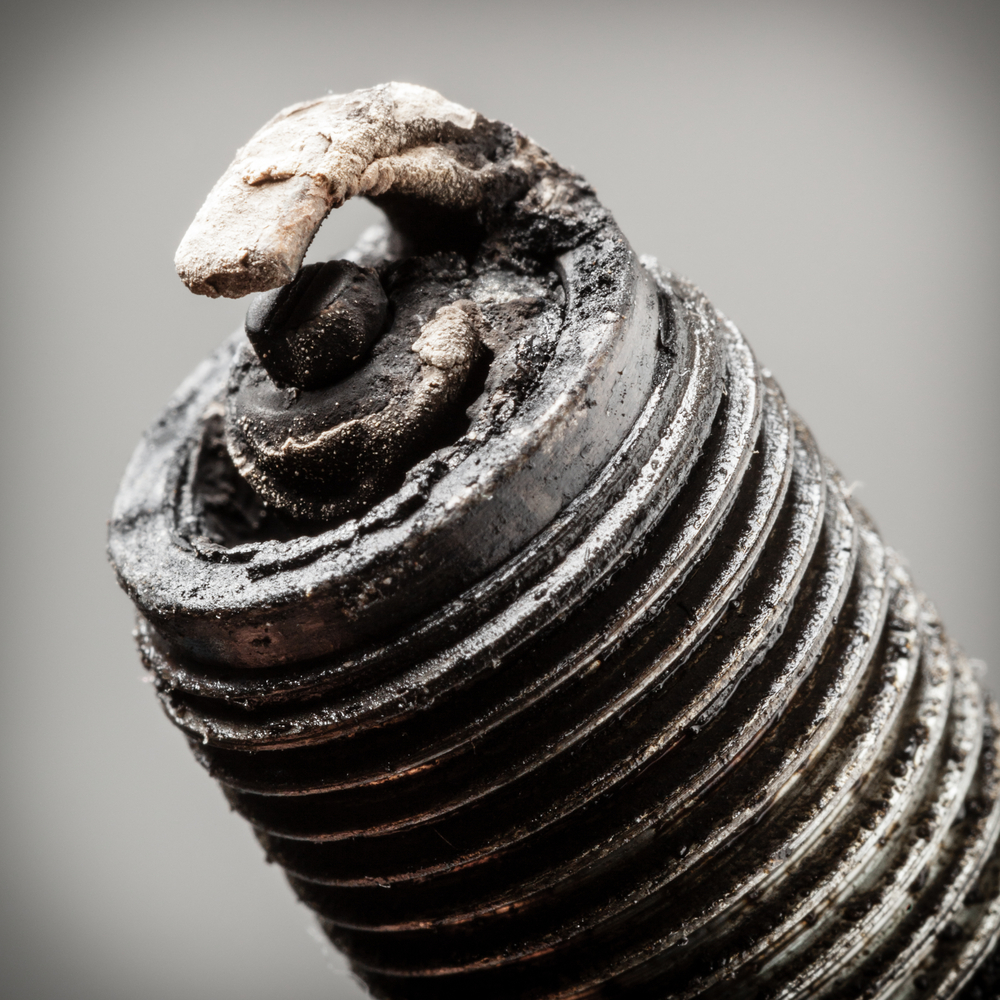 It’s not uncommon for your car to shake when stopped if the spark plugs are bad. Spark plugs ignite the air-fuel mixture in the engine cylinder, making the engine run. If one or more spark plugs are bad, the engine will not run correctly and the pistons will be out of sync, causing shaking. Each one of these poorly-timed piston cycles is known as an engine misfire.

Engine misfires will make the car shake when stopped. You’ll also experience a wide range of issues from bad fuel economy, lack of power, and erratic idling if bad spark plugs are causing your engine to misfire.

Spark plugs can go bad for two main reasons. The most common reason is that they’re dirty. Over time, carbon builds up in the cylinder from the leftover combustion gasses, causing the spark plugs to get dirty. Your spark plugs won’t fire properly if they’re dirty, which causes misfires and shaking.

The second reason is that the spark plugs have simply failed due to age. They’re a consumable part and thus should be replaced every 20,000 to 30,000 miles. In some cases, you may find that only one spark plug has failed, in which case, there’s no need to replace them all.

Spark plugs are cheap at just $20 to $50 for a pack of 8, and you may only need to replace one or two. However, if they haven’t been changed for a while, we’d recommend changing them all, especially as they’re inexpensive.

Take a look at our comprehensive guide on choosing the best spark plugs for your car so that you buy the right ones.

Fuel injectors are another common cause of shaking. Like with the spark plugs, the fuel injectors can get clogged up over time or fail, resulting in engine misfires and shaking.

You’ll notice additional symptoms if your fuel injectors are bad. These symptoms include bad gas mileage, loss of power, and a warning light on the dashboard.

You may be able to use a fuel injector cleaner to clean the injectors. If they’re not too gunked up, this cheap and easy fix may just work. However, if there are more serious problems with the injectors, they’ll need to be professionally cleaned or replaced.

Fuel injectors can be reconditioned for significantly less than the cost of a new injector. Injector reconditioning costs around $50 per injector, compared to more than twice that for a brand new part. 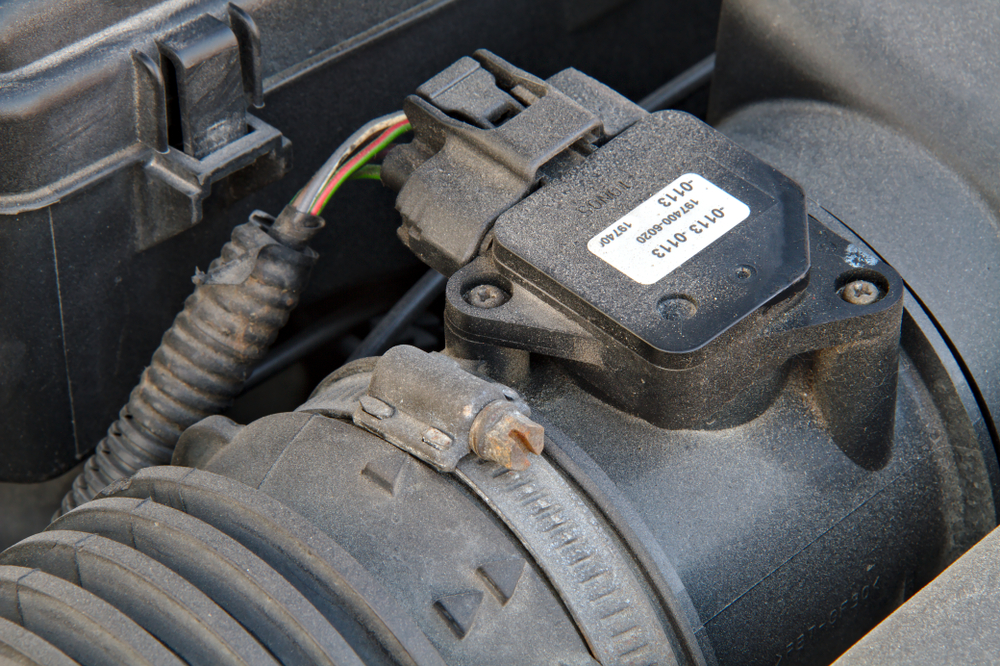 The mass airflow (MAF) sensor works out the amount of air entering the engine so that the engine control unit (ECU) can tell the injectors to put in the right amount of fuel. If there’s a problem with the MAF sensor, it may provide the wrong information, causing rough running at idle.

The mass airflow works by sensing the air density and temperature using wires. With most MAF sensors, a thin wire is heated up using a set voltage. When air passes over the wire, it cools slightly, decreasing the wire’s resistance. The engine control unit then sees this change in resistance and works out how much air is entering the engine.

It’s fairly common for a MAF sensor to become dirty, as a huge volume of air passes through it every time you drive. You can use a mass airflow sensor cleaner to clean the MAF sensor, but make sure to use the proper cleaner: delicate parts can become damaged when using non-MAF-specific cleaners like brake cleaner. Only ever use MAF cleaner on the MAF sensor.

The MAF sensor can also have a dirty electrical connector where it connects to the wiring harness. You can unplug the connector and use an electrical contact cleaner to see if that fixes the problem.

Failing that, your MAF sensor may be kaput, in which case you’ll need to buy and fit a replacement. Depending on your vehicle, a MAF sensor can cost anywhere from $30 to $300 just for the part alone. It’s a pretty easy component to change yourself, so there’s no need to go to a garage if you want to save some money.

Vacuum hoses are often overlooked as they’re not a major part like spark plugs or fuel injectors. Still, they play a vital role, and they can cause lots of issues if they’re leaking. Some components, such as actuators, are vacuum controlled. If there’s a vacuum leak with one or more of the hoses, there won’t be sufficient vacuum for these parts to work correctly.

In some cases, the vacuum hose may have just popped off while driving. If that’s the case, it’ll simply need reconnecting. However, it’s common for these hoses to wear out over time due to the engine’s heat, damaging the rubber. Even a small hole is enough to lose vacuum and cause your car to shake.

You can pick new hoses up pretty cheap, but make sure you get the right size in both length and diameter. It’s probably worth changing all of the easily accessible hoses while you’re at it, as if one has experienced rubber-rot, it’s likely others are damaged, too. 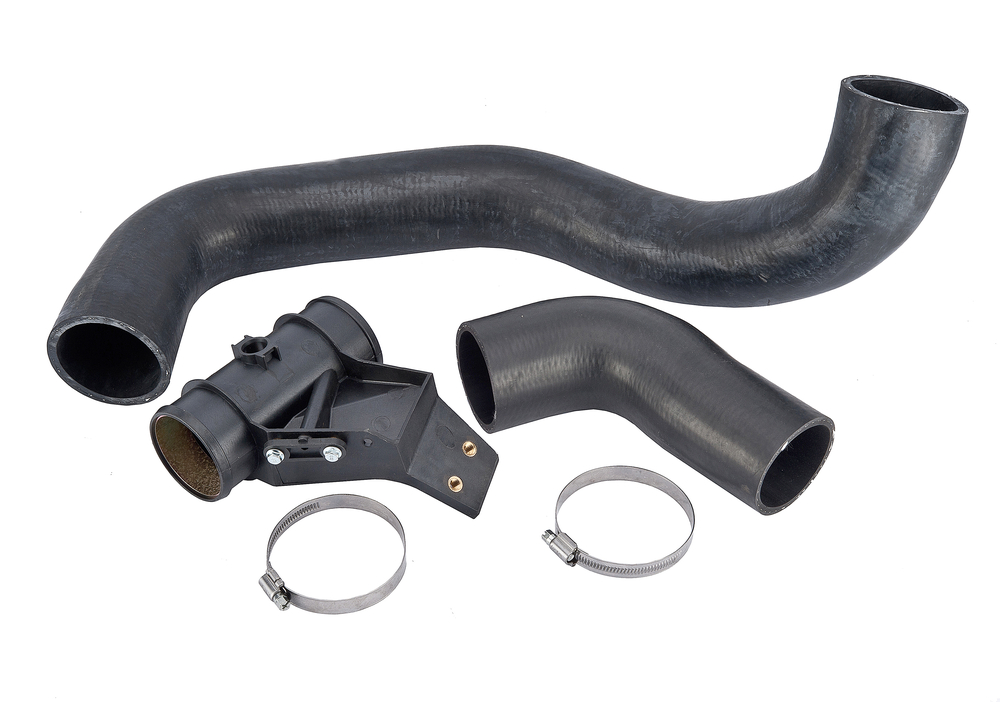 Air intake hoses are different from vacuum hoses, but they can still cause issues and make your car shake when stopped. When the engine is running, air passes through the air filter and into the engine via the air intake hoses. The mass airflow sensor calculates how much air has passed through the system, and the engine control unit injects a certain amount of fuel to achieve the correct air-fuel ratio.

If there’s a loose hose, additional air can enter the engine. If this air enters after the mass airflow sensor, it’s unaccounted for and results in the wrong air-fuel mixture in the engine cylinder. This causes an imbalance, which results in the engine running too lean — ultimately causing rough running, especially during idle, which causes vibration.

The air intake hose might also be damaged, as the plastic can crack over time. You’ll need to replace the entire hose if it is damaged as this can also cause rough running. However, if it’s only loose, you can simply reconnect it and tighten the clips to keep it secure.

For turbocharged engines, the same issue can appear with the boost hoses that connect from the turbo and the intercooler. It’s essentially the same issue, and they can either be loose or damaged. 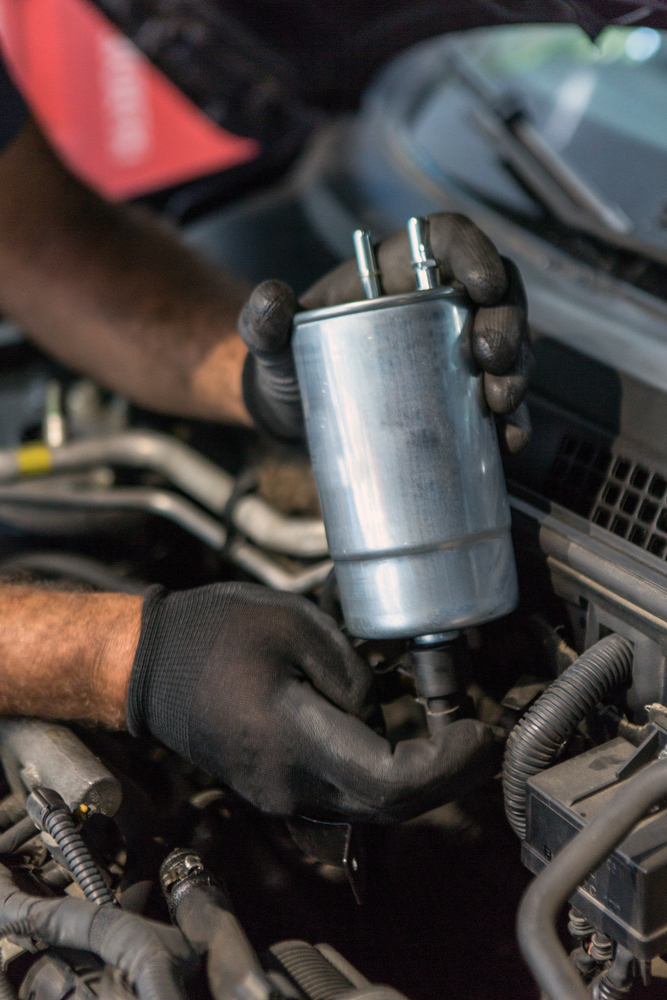 The fuel filter’s job is to filter the fuel before it enters the engine. It does this to prevent any bits of debris, like rust from the fuel tank, from entering and damaging the engine. Over time the fuel filter can become clogged, which prevents fuel from reaching the fuel injectors.

While fuel filters should be replaced every 30,000 miles if you have an older car, fuel filters in modern cars last a lot longer. They’re relatively cheap and not too difficult to replace yourself.

It’s worth finding out if the fuel filter is the culprit before changing it, especially if the filter isn’t that old. Your mechanic can perform a fuel pressure test to determine whether the filter is blocked. 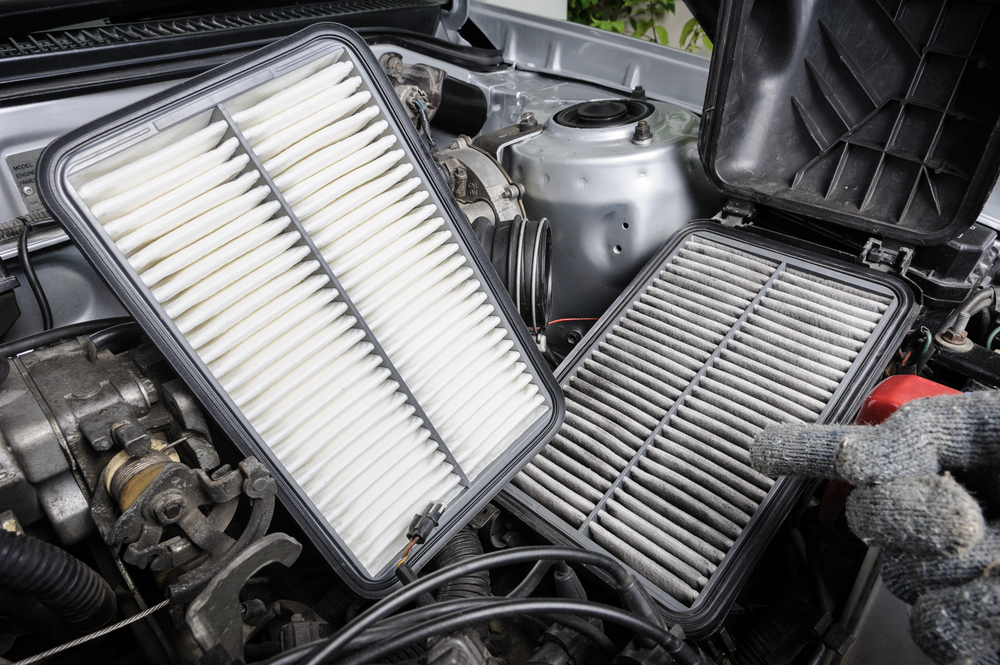 The air filter has a similar job to the fuel filter, but instead of filtering fuel, it filters the air. It does this to stop debris from entering the air intake and making its way into the engine, where it can cause serious damage.

Air filters should be replaced semi-regularly, especially if you live in a dusty environment. Most manufacturers recommend replacing the air filter every 12,000 miles or once per year.

The good news is that air filters are incredibly cheap, costing around $20 for the filter itself. It’s also a straightforward job to carry out yourself; all you need is a few tools and a spare 30 minutes. That said, some people would prefer for a mechanic to replace the filter. You can expect to pay between $40 and $100 for a garage to replace the air filter. 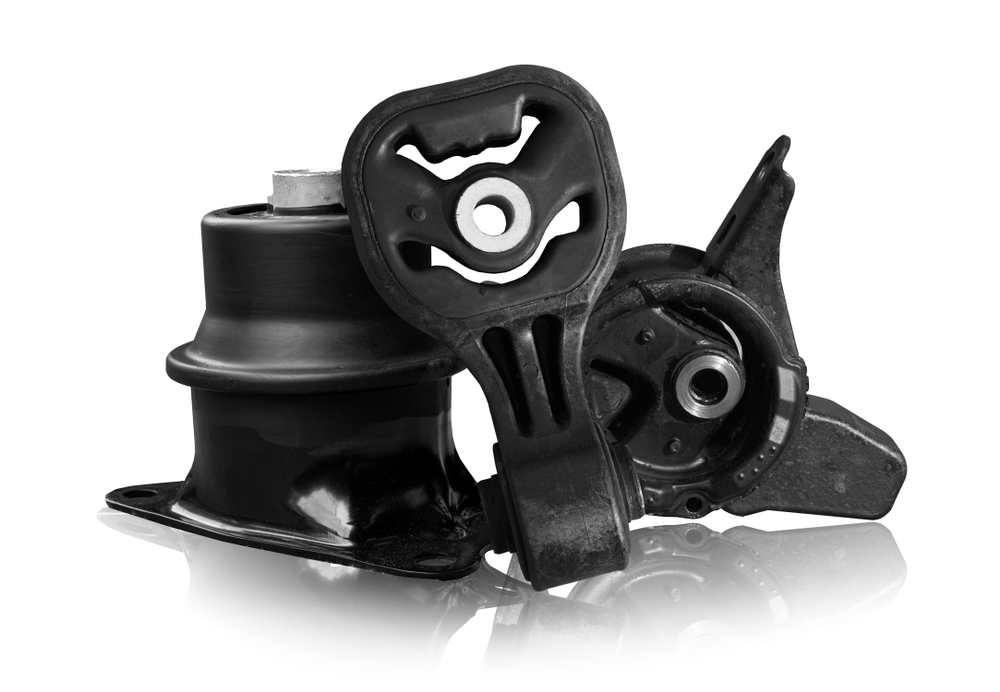 Engine mounts secure the engine to the chassis. They also dampen engine vibrations, so you don’t feel any shaking inside the car. You can experience shaking when stopped if they’ve become worn or defective.

If your engine mounts are defective, you’ll notice other symptoms, such as noises coming from the engine bay and excessive engine movement when pressing the accelerator. The most noticeable sign will be lots of shaking and vibrations when you’re sitting inside the car.

Engine mounts wear out over time as they take quite a beating due to years and years of vibration. You can expect engine mounts to last for around five years of heavy use before they need replacing, although they can last longer if your car isn’t driven as much. It’s always worth checking they are worn before replacing them as it’s a fairly big job that involves lifting the engine up out of the car completely

For this reason, most people will need to take their car to a garage to replace the mounts. You can expect to pay anywhere from $300 to $800 to replace worn engine mounts at a garage.

It isn’t normal for your car to shake when stopped. You should investigate the cause and get it fixed if it’s happening to your car. Ignoring the problem can make the shaking even worse, resulting in even more expensive repairs.

You may be able to fix the problem yourself if you are competent with engines. Failing that, you can always take your car to a garage. A professional will be able to diagnose the cause and repair it without too much trouble. While it will cost more, it’s the easier and less time-consuming option of the two.