Home › Knowledge Base › Alternator Fuse Blown: Symptoms and How to Fix It

Alternators are responsible for starting a car and ensuring that the electrical system has the juice required to carry out its own duties. So when your alternator fuse is blown, you’re going to know.

But of course, many of us won’t instantly know that it’s the alternator that’s responsible for the issues we’re experiencing. What we will see are certain symptoms that creep up when the part begins to malfunction.

Once we know how to decipher problems with an alternator, we can set about fixing it. In most cases, you’ll just need to fix the fuse. In others, you might have to replace your alternator. 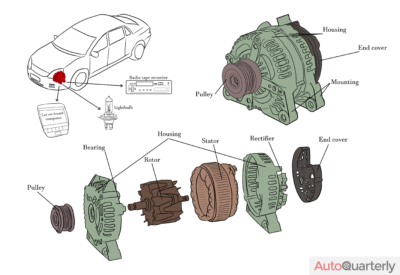 Alternators used to be called generators. The alternator generates the energy that a car’s battery needs to do its job. And as we know, the battery is responsible for starting the car. So if you can’t start your car or it takes some doing, you know that something may be up with the alternator.

What will be encouraging to know is that alternators tend to run maintenance-free for a very long time. Units can run for as long as between 10 and 15 years before problems start to creep up. Even after they fail, they switch to using battery power for a while before giving out completely.

But once an alternator does give up the ghost, you will start to notice problems with your car very quickly. Knowing how to spot these signs is the first step to either repairing your alternator itself or replacing it.

Symptoms of a Bad Alternator

The good news and bad news about bad alternators is that as soon as you have one, you will know. Or at least you will instantly notice the signs that something is off with your car. Here are some of the symptoms that you will notice.

Your car’s dashboard is a good thing to keep an eye on if you begin to notice issues, especially with starting your car. The battery warning light will tell you if there are issues with the alternator. So if you see the little sign that looks like a battery light up at some point, then you know that something is wrong either with the battery or the alternator.

The first thing you need to do if you see the light go off is to minimize the electrical load on your car. So shut down components like the air conditioner, stereo, and anything else that could be drawing electrical energy from the car. This will ensure that your car doesn’t die on you from a lack of electrical energy.

The next thing you need to do is to keep moving. The battery and alternator are called upon, especially when you start a car. So if you halt while you have an alternator that’s blown a fuse, then you probably won’t be able to start your car again. The best thing to do at this point is to keep your car in motion until you reach a point where you can find someone who can help you with the alternator.

Most often, you will start noticing that the headlights of your car seem to be dimmer than they usually are. The lights on your car’s dashboard may also show the same symptoms. Other electrical components will also begin to act wonky. Heated seats, for example, won’t be as warm as usually because of the alternator’s inability to channel the electricity that they require to them.

This may not be caused directly by an alternator with a bad fuse, but it is a sign that something may be off with the part.

Alternators are composed of several smaller components that combine to help it do its job. When the alternator is working like it should, these parts spin in harmony. But if one of these parts is worn down or breaks, then you will begin to hear unusual grinding noises coming from the inside of your car. If you hear your car make whining noises of any kind, then that’s a sign to take a look at the alternator.

We saw that one of the primary responsibilities of an alternator is to start your car. One of the simplest ways to know that your alternator might have blown a fuse is when you see that you have issues starting your vehicle.

If you notice any of the aforementioned symptoms, then you likely have an alternator that’s blown a fuse. Now it’s time to fix it. Let’s find out how you can do that.

How to Fix an Alternator With a Blown Fuse 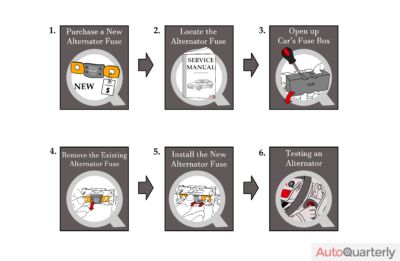 Replacing a blown fuse is not the toughest auto repair job in the world. What does make it a little complicated is the fact that most car fuse boxes these days have dozens of fuses. This is the only real complicating factor in the process. We’ll cover how you can find out where the alternator’s fuse is specifically. Let’s take a look at what the process looks like step by step.

This is the obvious first step in the process and it’s quite easy. All you need to do is head down to your local auto parts store and name the make and model of your car. They’ll hand over its fuse to you with just that information. Alternatively, you can also purchase the fuse online if you know the one that needs to go in your car.

This is the step in which you want to pay a little extra attention. As mentioned earlier, fuse boxes in cars these days are chock full of many different fuses–sometimes as many as 40 different kinds. So when you set about changing the fuse for your alternator, you want to make sure you’re working with the right one. 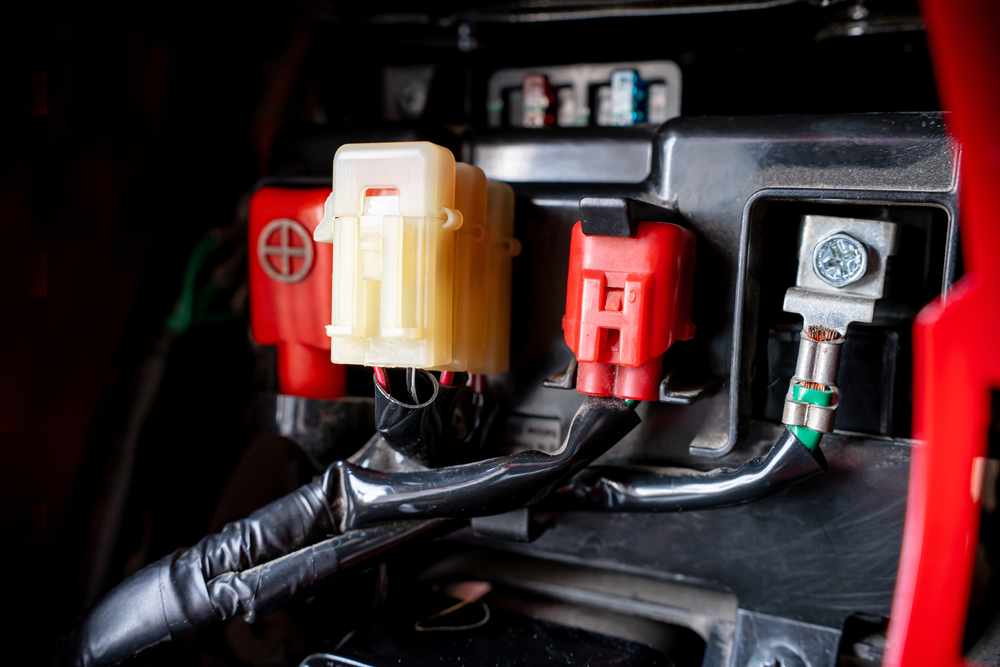 The best way to do that is by taking a look at your car’s owner’s manual. Yes, you need to dust the old thing off so you can find out where the alternator’s fuse sits. The instruction manual will usually have a diagram which shows the layout of the fuse box and where each specific fuse goes. Simply look at the part that’s marked for the alternator fuse since that’s the one we need to find in the next step.

Open up Your Car’s Fuse Box

Now finding your car’s fuse box itself isn’t as obvious as it sounds. That’s because different manufacturers put this part in different locations. In some cases it may be under the hood; in others you may find it under the steering wheel or seat. Once again, check the owner’s manual to find out.

Once you’ve located the fuse box, it’s time to open it up. You should be able to take the cover off using just your fingers in most cases. But you should have a screwdriver handy in case it takes some extra effort to pop off the top of the fuse box. But make sure to do it gently so that you don’t damage the fuse box’s cover in any way.

At this point you will be met with a fuse box full of several different kinds of fuses. You will be able to locate the alternator’s fuse since we’ve already looked for it in the owner’s manual.

Much like the cover of the fuse box, you should be able to extricate the alternator’s fuse from the fuse box using just your fingers. Bur once again, you could use a screwdriver if the fuse is sitting in its position too snugly. Just make sure to get the fuse out without causing any damage to the rest of the fuse box.

There’s one final check you need to make before you can install the new alternator fuse. Take a look at the fuse rating on your old alternator and on the new one. They should match. If they don’t, then you need to go back and find an alternator fuse that has a matching rating.

If the fuse ratings match, then you can proceed with the installation. All you need to do is push the new fuse down into its position and make sure that it sits there snugly. You can then get the cover on your fuse box back on and that completes the process of replacing an alternator’s fuse.

Once you’ve installed the alternator, it’s time to test whether the setup works. If you’re doing this at home, then the only way to test the alternator is indirectly. That is, you will have to start your car and turn on some of the electrical equipment in it. If the car starts easily and all the electrical equipment works fine, then you’ve carried out the installation correctly.

You don’t, however, need to take your car down to the shop if you have an alternator with a blown fuse. As we’ve seen, the process of replacing the fuse isn’t too complicated. But if you don’t feel equipped to do it, then you can have a mechanic replace the part for you.

Alternators and batteries play similar roles in cars. So it can be hard to tell whether you have an alternator with a blown fuse or an issue with your battery. Thankfully, there’s a simple way to tell the two apart.

Start by jump-starting your car. Now remove the jumper cables. If the issue is with the battery, then the car will continue to run at this point. This tells you that your battery probably needs to be charged. If your car dies when the cables come off, then that’s a sign that the alternator isn’t doing its job.

The symptoms of an alternator with a blown fuse can creep up suddenly and seem serious. Luckily, dealing with the problem isn’t too costly and doesn’t take too much work.

We’ve shown you exactly how you can go about replacing the alternator fuse in your car. If you don’t feel confident enough the first time, you can watch a mechanic do it or ask a more car-savvy friend for help. Alternators are hardy parts and tend not to have issues for as long as a decade of using a car.