Home › Knowledge Base › Low Engine Compression: Why It Happens and What to Do

Let’s be honest: the internal workings of an engine is a pretty complex topic. If you’re like most people, though, you’re probably not too bothered about how it all works. Instead, you want to know what low engine compression is and how you can fix it, so you can get back to driving.

Low engine compression is a relatively rare issue, but it can appear without any warning.

If you want to know the symptoms, causes, and methods of diagnosing low engine compression, this article is for you.

What Is Engine Compression?

Both diesel and gasoline engines require compression to function. Air and fuel are mixed together and compressed in the cylinder, where it’s ignited. The resulting explosion inside the combustion chamber causes the pistons to move and the engine to run.

This explanation is a condensed version of how it all works — if you’re interested in learning more, this article goes into great detail.

For an engine to function properly, the compression must be right. Too much or too little can cause significant issues and damage internal components, in addition to causing the engine not to run correctly. Low compression may affect just a single cylinder or multiple cylinders.

What Are the Symptoms of Low Engine Compression?

The symptoms of low engine compression are very noticeable. While other problems can cause the symptoms listed below, these symptoms always appear in engines with low compression.

Engine misfires are a typical symptom of compression loss in one cylinder. The engine will misfire when something is wrong with the combustion process. In the case of an engine with low compression, the misfire is caused by the lack of compression, which results in the air-fuel mixture not being properly ignited.

In addition to misfires, you might also experience backfires. Backfires happen when fuel is burnt in the exhaust manifold, which results in a popping sound. This is due to the fuel hitting the hot exhaust manifold rather than being burnt during the combustion process.

Your engine must be firing on all cylinders for you to get the maximum performance out of it. Your engine’s performance will decrease if one or more of your cylinders aren’t working correctly due to low engine compression. This decrease in performance is most noticeable when accelerating or driving up a steep incline.

In addition to decreased engine performance, your gas mileage will worsen if there’s low compression in a cylinder. This is due to fuel being injected into the cylinder and not burning correctly. If you’re filling up more often than usual and experiencing other symptoms, like misfires, there may be an issue with the compression.

Typically, the higher the compression ratio in the engine, the more fuel-efficient it is. Therefore, low engine compression equals poor fuel efficiency.

Starting problems can be caused by many things, from bad batteries to faulty spark plugs. However, if your engine won’t start after multiple attempts and the battery seems fine, it could be caused by a loss of compression across all cylinders.

Each cylinder has a piston that moves up and down during the combustion cycle. If the piston is damaged, gasses can escape from the cylinder and cause low compression.

Pistons can become damaged for several reasons. One common cause is overheating. While pistons are made from an aluminum alloy and can withstand a lot of pressure, they’re not designed to operate at extreme temperatures. If hot spots form on the piston, it can burn a hole right through it.

Piston replacement isn’t easy, and it isn’t cheap. Unless you know how to rebuild an engine, you’ll need to hire a mechanic to do it for you. You can expect to pay thousands of dollars for an engine rebuild. 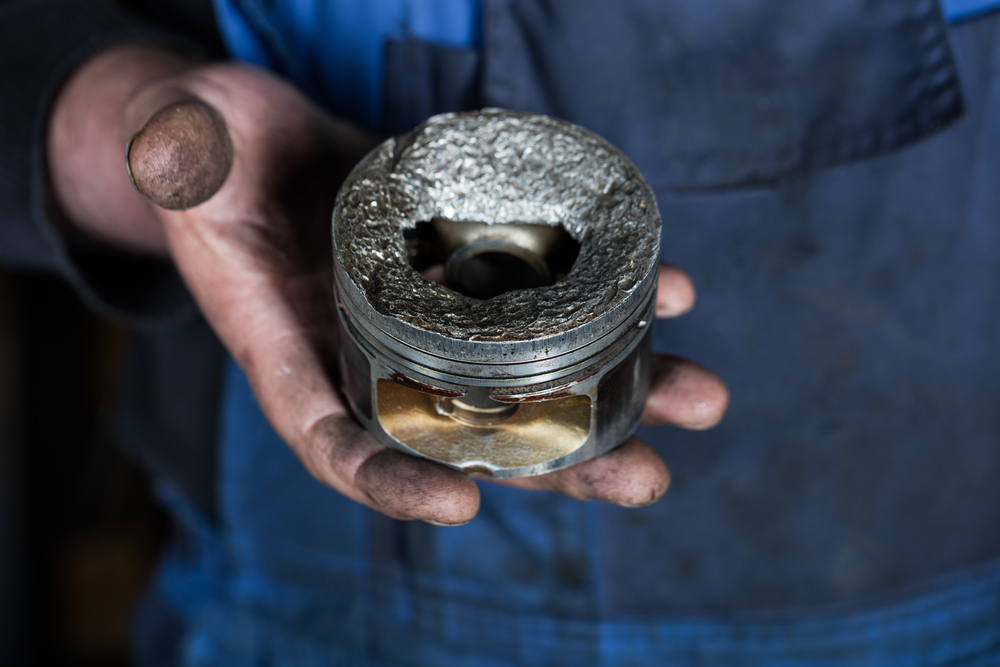 Piston rings create a seal between the piston and the cylinder wall. This seal ensures that no gasses escape from the cylinder during the combustion process. Over time, the piston rings naturally begin to wear out, but they can also wear prematurely due to damage.

Sometimes the valves or valve seats can leak. The leaky valves allow gas to escape, which results in low compression in the cylinder. Leak down tests are useful in determining if the valves are leaky.

A common cause of cracked cylinder walls is engine overheating. Overheating is also usually the culprit in damaged pistons and worn rings, so it’s not uncommon for all three parts to be damaged by overheating.

One way to check for cracked walls is to open the radiator cap and take a peek inside. If you can see bubbles forming, air might be leaking from the cylinder and into the coolant through cracks in the cylinder wall. 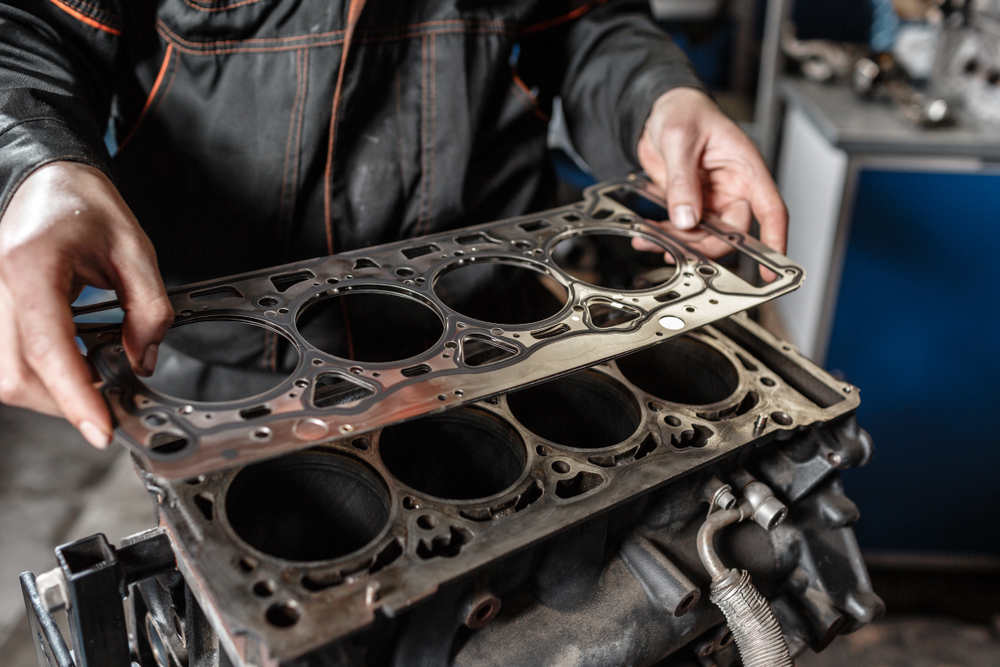 The head gasket provides a seal between the cylinder head and the engine block. It also ensures that the engine coolant and oil never mix. If the head gasket fails, it can cause a whole host of problems, including compression leaks.

Head gasket failure is usually caused by engine overheating. Another common cause is if the engine has been thrashed at high revs for long periods. This can cause the gasket to develop a small hole. If the hole forms between two cylinders, both will end up with low compression.

Head gasket replacements are expensive. There are some cheap DIY solutions out there, although how effective they will be depends on how serious the damage is. Replacing the head gasket is a big job, and can cost between $1,000 and $3,000. 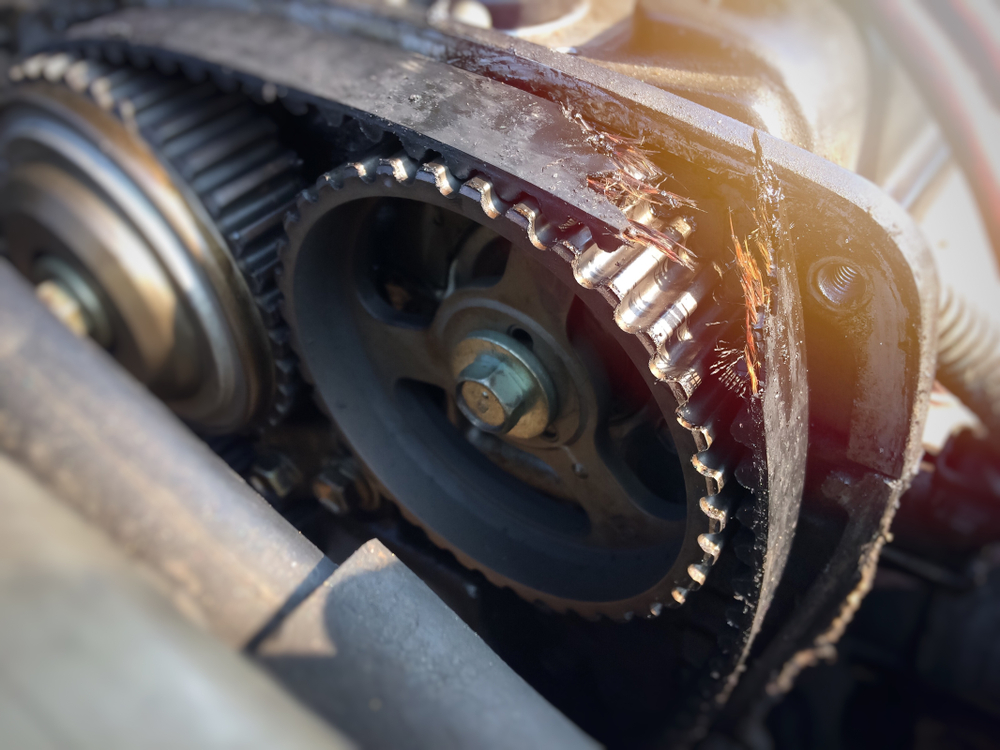 Most engines have timing belts, although some use chains. The timing belt’s job is to keep all of the internal components moving in harmony by connecting the camshaft to the crankshaft. If the belt is damaged or breaks due to it being old and worn, the camshaft won’t move. This can cause the pistons to hit the valves, which results in massive damage to the engine.

Timing belts can also slip or jump if they’re not tight enough. Faulty timing belt tensioners often cause this. A slipped belt doesn’t always cause damage to the engine; however, it does throw the timing off, resulting in compression loss.

Timing belts generally don’t cause problems if they’re changed regularly. They should be changed every 75,000 miles or when they’re damaged. We’d recommend letting a mechanic change the belt as getting it wrong can cause massive problems for your engine. You can expect to pay around $500 for a garage to carry out a timing belt change.

While not as common as the other causes, a worn camshaft lobe can cause low engine compression. Each valve has a lobe that assists in opening and closing the valves inside the cylinder. It may not move as it should if it becomes worn out, resulting in the valve being stuck in an open position or closed position.

If the valve is stuck in an open position, it will allow the compression to escape, resulting in low compression in the cylinder.

How Do I Fix Low Engine Compression?

Diagnosing the cause of low engine compression can be tricky. If you’re not confident working on your engine yourself, you should pay a mechanic to take a look at the problem.

If you do fancy tackling the job yourself, you can try some of the tests detailed below.

Find Out Which Cylinders Have Low Compression

It would be best to find out which cylinders have low compression before taking your engine to bits. You might have one cylinder with low compression, or they could all be affected.

Knowing which cylinders are affected will help you narrow down the cause, making it much easier to fix. Once you know what’s causing it, your next step is to replace that part—which is easier said than done, but not impossible for anyone with enough technical know-how to diagnose the problem in the first place.

Carry Out a Compression Test

Step 1. Remove the fuel pump and fuel injector fuses. This stops the engine from injecting fuel into the cylinders when carrying out the test.

Step 2. Disconnect the ignition coil packs and remove the spark plugs from each cylinder.

Step 3. Screw in the threaded part of the compression gauge into one of the spark plug holes by hand.

Step 4. Switch on the ignition, press the accelerator pedal, and let the engine crank four times.

This should give you a good compression reading. If it doesn’t, you can crank the engine up to ten times. Remember to crank the engine the same number of times for each cylinder you test for the readings to be accurate.

Step 5. Write down the compression reading and repeat from the third step for all of the other cylinders.

All of the cylinders should have a reading of 100 PSI or more. There will be some variation between each cylinder, but it shouldn’t be more than 10% between the highest and lowest readings.

If there’s only one cylinder with low compression, you know the cause is isolated to that cylinder. If they’re all low, there’s a bigger issue affecting the engine. You can now move on to investigating the cause.

Now that you know whether the problem is isolated to one cylinder or affecting them all, you can begin carrying out the following investigations to confirm what’s causing the low compression.

Pour Oil Into the Cylinder With Low Compression

If you’ve discovered that there’s only one cylinder with low compression, you can use oil to find the cause. It’s best to carry out this test directly after finishing the first compression test, as you will need to remove the spark plugs and perform another compression test.

Perform a Leak Down Test

Leak down tests are similar to compression tests, although they can be more accurate as they eliminate some of the variables that can affect the results. The key difference between the two tests is that a leak down test introduces compressed air into the cylinder via the spark plug hole and measures any leaks, whereas a compression test measures the compression generated by the engine.

Remove the Oil Cap and Check for Pressure

This method is quick and easy for diagnosing low compression. All you need to do is remove the oil cap and allow the engine to run. Place your hand over the oil filler hole and feel for any pressure. A significant amount of pressure or smoking indicates that compression is leaking past the pistons and into the crankcase.

This leak is often caused by damaged pistons or worn piston rings. All engines do have some blow-by, so the test isn’t 100% foolproof. However, if the blow-by is significant, it indicates there’s a problem with the cylinder compression.

Inspect the Coolant or Oil for Head Gasket Issues

One of the easiest ways to check for head gasket problems is by checking the coolant and oil. If you can see oil in the coolant, or a creamy substance in the oil, there’s a hole in your head gasket. The oil and coolant should never mix, and the head gasket is what keeps them separate.

Low engine compression is a serious problem, and it can be challenging to find what’s causing it. In many cases, it’s not cheap to fix. You should investigate the issue if you notice any low compression symptoms, as the problem will only worsen over time.

That said, don’t just assume you have low engine compression if you notice one of the symptoms listed in this article. Some symptoms can be caused by other problems, like faulty spark plugs or malfunctioning oxygen sensors.

Always carry out a compression test to confirm that the engine has low compression in one or more cylinders.