Car engines get hot, and most are cooled by fluids so that they don’t get too hot and self-destruct. Engines don’t like running too cold, though, so cars have a thermostat that lets them regulate their temperature. When that thermostat fails, it can be bad news for your motor.

In this article, we’ll take a walk through the symptoms of a bad thermostat and how to solve the problem. We’ll also go over how a thermostat works and how to test an old thermostat.

There are five common symptoms with a broken or failing thermostat. If your car is overheating, stop driving. Even overheating for a short period can cause lasting damage.

Most cars have warning lights that warn you if your engine gets too hot. However, if you have an older car or a malfunctioning indicator, you’ll have to rely on your senses. The smell of burning coolant is pungent, and it’s one of the first indicators that your car may be running too hot.

Coolant Is Leaking Out

Coolant dripping out and pooling under the car is never a good sign. If the thermostat is stuck closed, it may have caused a seal or line to rupture and leak. The leak could also be causing the thermostat issues because, without sufficient pressure, the thermostat can’t open.

When you first start the car, it takes a while to come up to temperature. If the thermostat is stuck open, it will take a lot longer, and you may notice some noises or RPM variations as the car idles.

If the thermostat is sticking, your first sign will be that the thermometer in your dash will behave strangely. It may read very high, then suddenly low, then high again. In modern cars, you may notice that the temperature warning light comes on at random times.

This is one of the more difficult symptoms to notice, especially if it’s the summertime. However, if you see that your heater is not working as well as it used to, it may be a sign that the thermostat is not working as intended. Usually, a stuck thermostat will cause a heater to take a long time to reach operating temperature. The air may blow, but it will only be lukewarm at best.

What a Thermostat Does 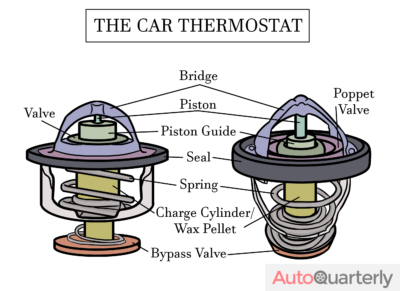 A car’s coolant system is composed of two main parts: a water pump and a radiator. It is marginally more complicated than that, but at the core, a water pump pumps water through the engine to collect heat and gets rid of that heat through a radiator. Often, the water pump is connected directly to the accessory drive of the engine. That means if the engine is running, water is circulating.

However, the engine likes to run within a certain temperature range. It wants to be a little hot. Not too much, but a cold engine doesn’t run as well as a warm engine. A small, spring-operated device called a thermostat is installed to act as a regulator and allow the engine to warm up after it first starts.

The temperature that a specific engine prefers can vary depending on the climate, model, and general condition of the motor. Therefore, thermostats are available at different temperatures. A 180f thermostat will open when the engine reaches 180 degrees Fahrenheit, for instance. Most thermostats are between 175f and 210f.

Thermostats can fail in one of two ways: they can stick closed or stick open. Of the two, a thermostat stuck closed is a greater risk to your motor. If you suspect the thermostat is stuck closed, the best thing you can do is stop driving the vehicle and get it serviced.

If the spring fails, or the thermostat becomes damaged and can no longer hold the coolant back, it is “stuck open.” This means that coolant will circulate and cool your motor at all times, even if it’s not at operating temperature.

A car can run cool for long periods. It may shorten the life of the engine and certain components, but it’s not dangerous. In fact, some owners remove the thermostat intentionally. It’s a good temporary fix if the thermostat fails since your car can run without it; it just won’t run as efficiently as possible.

When a thermostat becomes stuck closed, it will block coolant from flowing through the motor. If coolant can’t flow through the motor, the motor will overheat. Overheating can be very destructive to a motor. Routinely rounding a motor hot can cause it to fail completely, which is dangerous.

It can be difficult to diagnose a broken thermostat because the same symptoms are present when almost any part of the cooling system fails. A water pump failure will cause overheating in much the same way, as can a clogged pipe or radiator issue.

There are two main ways to narrow down the issue to know for sure the thermostat is bad and not any other component.

The first test you should do simply requires you to start the car and let it run for a bit. If you can convince a friend to help, you can do this test while driving down the road. Simply begin driving down the road while your friend watches the temperature gauge. The temperature should rapidly climb to about 200f, then stop climbing. If it takes a very long time to climb or continues to climb after 220f or so, then the thermostat is likely bad.

If you don’t have another pair of eyes at your disposal, you will have to do the test while parked. Start the car and let it idle for a few minutes. Then begin adding some gas to bring the RPMs up, and watch the temperature gauge. Let the RPMS sit around 1500 for a few minutes. The temperature should climb to 200f or so, then stop rising. If it doesn’t make it to 170f, the thermostat is probably stuck open. If it hits 220f or so and continues to rise, the thermostat is likely stuck closed.

Once you have completed the driving test or have already noticed temperature issues, the next step is to physically test the thermostat. To do so, you must remove the thermostat from its housing. Usually, it is a very simple procedure since the thermostat is a commonly serviced part.

Then, drop it into a pot of water on the stove. There will be a temperature stamped on the top of the thermostat. When it reaches that temperature, it should “pop.” The spring will contract, and the plunger will retract, opening the thermostat. If you can boil the thermostat or heat it in the oven without it popping, it is not functioning correctly.

The issue with doing this physical test is that thermostats are very cheap. If you have already done the work to remove the old one, you have already expended most of the resources necessary to simply replace it with a new one. Once you have a new one in place, you can simply repeat the driving test to ensure the car is operating as intended.

If you have narrowed down the issue with your car to the thermostat, the next step is solving the problem. There are two ways to do that, and both take less than a few hours. You can do it yourself, or you can pay a shop to do it.

How to Replace Your Thermostat

Replacing a thermostat is a fairly straightforward process that anyone with basic hand tools is capable of doing. You can save a lot of money doing it yourself since most of the cost at a shop will be in labor. A high-quality thermostat, like this Genuine Honda part, often costs less than an hour of shop labor. Cheaper thermostats, like this one from Dorman that includes a new housing, are fine for most vehicles.

Remove the Hose and Housing

Undo the hose clamp on the radiator hose and slide the hose off. This can be the most difficult step since hoses have a habit of becoming hard to remove. Next, remove the thermostat housing. Be careful not to damage the gasket if you plan on reusing it.

There should not be much coolant in the hose when the car is off, so simply throwing an old towel under the car is usually sufficient to control the mess. The most important thing to remember whenever you work with coolant is that it’s highly toxic. If you have pets or curious children, be careful to clean up any puddles, and don’t leave containers out.

Remove and Replace the Thermostat

Consider replacing the thermostat housing gasket as well. They are very inexpensive, and they do degrade over time.

The last step is to put it all back together. Make sure to replace any lost coolant. You probably won’t have lost much, but it’s a good chance to check and make sure all your fluids are topped up before setting out on another journey.

If you don’t feel comfortable replacing the thermostat yourself, any mechanic can do it in a short period of time. You can expect the parts to cost between $50 and $75. Shop time is usually between $75 and $100 per hour, and a thermostat replacement shouldn’t take more than an hour.

That means you can expect to pay $150-200 dollars at a private shop. The cost can be much higher at a dealership.

Keep Cool and Carry On

Your cooling system is an important part of your car’s operation. When it stops working correctly, it can cause a lot of stress. Fortunately, a broken thermostat is a fairly easy thing to fix, and you can be back on the road in no time.