Home › Knowledge Base › Bad AC Condenser: Symptoms to Watch for and Replacement Costs

Most modern vehicles on the road have air conditioning. What was once a high-end feature only found on luxury cars is now a standard component that consumers have come to expect.

While the inclusion of air conditioning is a good thing for car owners, especially those who live in hot climates, the feature is yet another thing that could require the occasional repair. One of the more common problems your cooling system could encounter is a bad AC condenser, which you will need to repair to keep your air conditioning functional.

Here’s a look at some symptoms to watch for when identifying a bad AC condenser, along with information on how much the repair will cost.

A Look at Your Car’s AC System 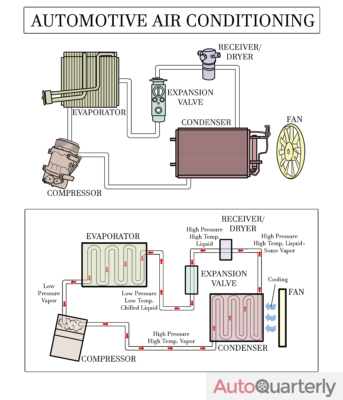 Although you’ll need your AC condenser in working order to keep your car cool on a hot day, these systems have six different components that must work together to generate cold air.

You must be aware of each of these components so that you don’t go out and replace your AC condenser without first considering some other parts that could be causing the problem.

Of course, the condenser is one of the main parts you’ll want to check. This component is responsible for cooling refrigerant gas and turning it back into a liquid. When inspecting your vehicle’s air conditioning system, you can identify the condenser by finding a series of tubes that usually sit in front of the radiator.

Another critical piece in the air conditioning system is the compressor, a part responsible for pressuring air and sending it to the condenser.

The evaporator is one of the most critical parts of your cooling system because it makes the air cold. Liquid refrigerant moves into the evaporator and cools the air before it enters the cabin.

Also known as the orifice tube, the thermal expansion valve sits between the condenser and the evaporator. It is responsible for monitoring the temperature and pressure within the system as a whole. This valve also ensures that an optimal amount of refrigerant transfers to the evaporator.

Note that not every air conditioning system has a thermal expansion valve.

If your car has a thermal expansion valve, it will also feature a receiver or dryer. These devices separate the liquid coolant from the gas coolant to ensure no excess moisture makes its way into the compressor. A compressor will break down very quickly if excess liquid gets inside, so this component removes all extra moisture from the gas before it reaches that stage.

The accumulator works in conjunction with your thermal expansion valve. Its main job is to monitor how much refrigerant gets into the evaporator and store any excess coolant until it’s needed. The accumulator can also filter debris to keep the system clean.

All of these components work together to cool the air before it reaches your cabin, and when you experience problems with one of them, it can throw the entire system off and prevent it from working. 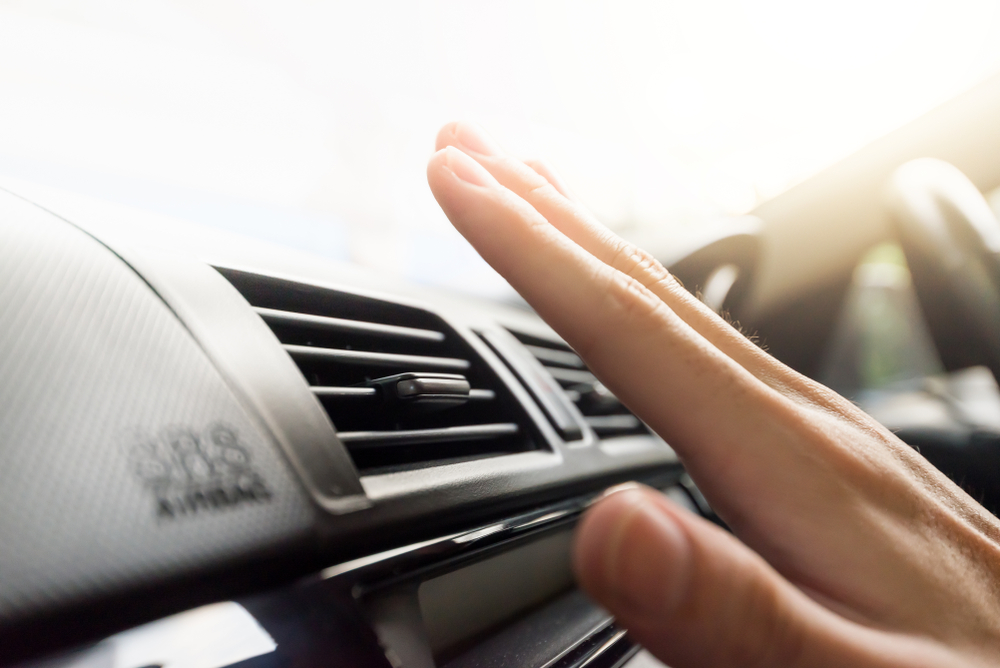 Your vehicle’s air conditioning system is very similar to the one inside your home. In short, it works through a heat exchange and pressure changing system.

The gist is that refrigerant sits in the system and is converted from a liquid to a gas and then back to a liquid. The AC condenser is essential to this process because it turns the refrigerant back into a liquid so it can cool the air before it reaches your cabin.

The process relies heavily on pressure changes, so even a tiny hole in the system can throw the entire thing off. Everything begins with the A/C compressor, which is controlled by the vehicle’s crankshaft. This compressor pressurizes the refrigerant and turns it into a gas.

The cool liquid then moves to the receiver or dryer, where moisture is removed from it. The accumulator is also present in this area and is responsible for removing additional moisture and debris. It also stores any liquid that isn’t needed at that moment.

Now the liquid can head to the expansion valve, which has a small opening that only allows a tiny amount of fluid through at once. This action relieves much of the pressure from the liquid, helping the process along.

The depressurized liquid can then travel to the evaporator, which sits directly under your car’s dashboard. At this point, the liquid is very cold, allowing it to cool the air before the air conditioning blower moves it into your vehicle’s cabin.

However, since the air starts very warm and transfers its heat to the refrigerant, the refrigerant begins to boil, turning it back into a gas. This gas then moves back to the compressor, where it repeats the process and continues to keep the interior of your car cool.

Learning how the air conditioning system works can make it easier to troubleshoot problems as they arise.

5 Symptoms That Might Mean You Have a Bad AC Condenser 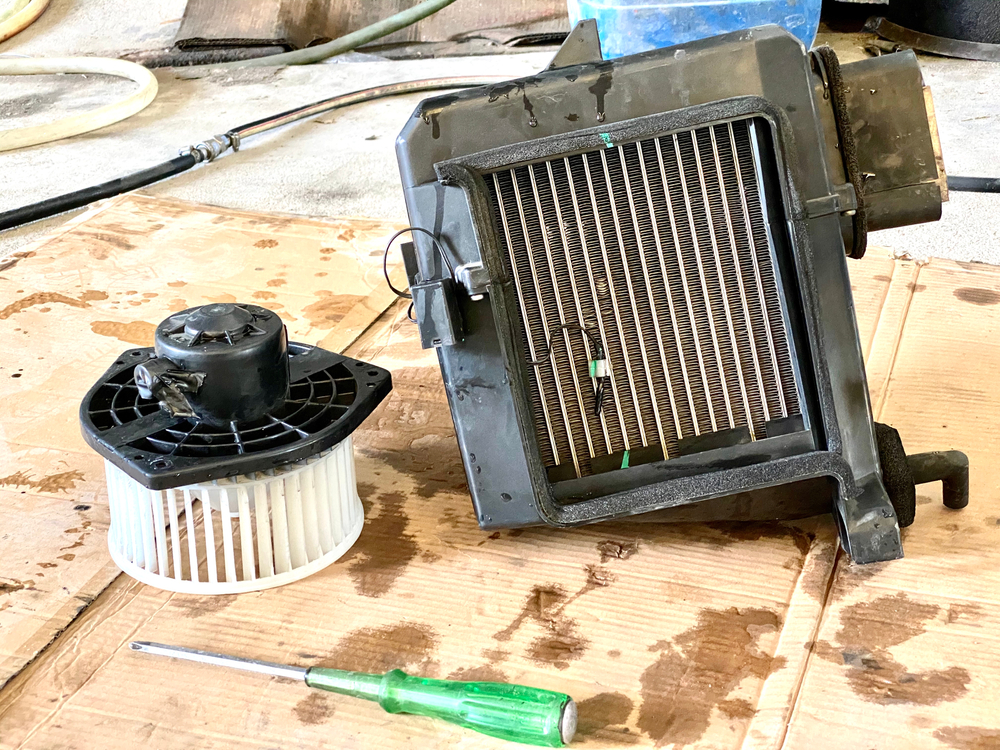 Although a non-functioning air conditioning system could mean you have trouble with any of the internal components, five symptoms often signal an issue with your AC condenser. When you notice any of these problems, it’s a good idea to check the condenser first to save yourself some time.

Warm Air Coming From the Vents

It goes without saying that when there’s warm air coming from your vents despite having the air conditioning cranked, you have something wrong with your AC system. This sign often means there’s an issue with the condenser because it occurs when an obstruction interrupts the flow of the gas entering the condenser or the liquid leaving it.

When the refrigerant can’t reach the next stage of the air conditioning system efficiently, the air won’t reach its coolest levels before it enters the cabin.

Perhaps the most disturbing sign you have something wrong with your AC condenser is when you smell something burning as you attempt to operate your air conditioning system. This smell typically occurs when your car cannot release the heat it builds up throughout the cooling process.

When this heat can’t escape, it heats up the internal components rather than the air it’s releasing, and you could end up with a burning smell.

This issue could be severe, depending on how long it has been going on, and you could end up having to replace multiple components, including your condenser, as a result.

Your car can overheat for many different reasons, but if your air conditioning has stopped working as well, there could be a link between the two problems.

This issue is similar to the burning smell that’s present because it often means that the AC condenser isn’t receiving or circulating the refrigerant efficiently, causing the entire system to heat up.

When refrigerant can’t move through the condenser, the air surrounding it stays hot, eventually overheating the entire vehicle.

Because gas enters your AC condenser under high pressure, it’s highly prone to leaks. Even a small leak in this part of your system could escalate quickly, leading to a pool of liquid under the front of your car.

There are seals throughout your condenser, and much like any other seal, they get brittle as they get old. Therefore, you’ll want to inspect your condenser seals and replace the entire unit if they look like they’re on their last legs.

If you have a newer vehicle, there might be a warning light on your dashboard that lets you know there’s a problem with your air conditioning system. From there, you’ll need to check under the hood and watch for other symptoms. A bad AC condenser could be the issue because it does a lot of the heavy lifting as you cool your car.

Keep an eye for all of these symptoms of a bad AC condenser to ensure you can get to the bottom of the problem before it does serious damage to the air conditioning system or other vehicle components.

What Causes a Bad AC Condenser?

Learning a bit about the causes of a bad AC condenser can help put your mind at ease. The good news is that although the condenser is one of the most vulnerable parts of your air conditioning system, problems are relatively rare.

The bad news is that there’s very little you can do to protect your AC condenser from breaking down because they usually fail due to wear and tear or old age.

Generally, problems with the AC condenser occur in the seal or tubes. These pieces get worn out over time, causing the system to leak. Unfortunately, you can’t replace these seals, so you’ll have to buy a new condenser to get your AC up and running again.

Debris can also get inside the condenser, leading to issues. This debris typically comes from the compressor, as when it starts to break down, it can send small pieces of metal into the condenser. If you find yourself in this situation, both parts will require replacement.

Finally, moisture can lead to a bad AC condenser. When the seals start to leak, ice can form inside the tubes, leading to blockages.

All of these causes seem relatively minor on the surface but can quickly leave you without any air conditioning in your vehicle while potentially damaging other components, as well.

How Much a Bad AC Condenser Costs to Replace

We’ve established that you likely can’t repair your bad AC condenser because once the seals are gone, the entire unit will require replacement.

The cost of replacing your condenser will depend on the type of vehicle you’re driving and whether other components need replacement, too. For example, if you drive a luxury car and your condenser, evaporator, and compressor are shot, the repair will cost far more than in a domestic vehicle that just needs a new condenser.

While an AC condenser isn’t an overly challenging part to install, it will take your mechanic a bit of time to diagnose the issue and determine whether other components have damage, as well.

However, it’s highly recommended that you visit a professional mechanic for this job because your AC condenser is under so much pressure. While some of this pressure can be released when the unit isn’t working, it’s still a dangerous job that you don’t want to attempt without adequate experience.

In addition, the refrigerant must be contained using a specialized tool as you vent the system because it’s highly toxic and illegal to release into the atmosphere.

Replacing a bad AC condenser can be expensive, but it’s worth getting it done immediately to restore your air conditioning system and protect other valuable components under your hood.

There’s a lot to take in when diagnosing a bad AC condenser because it’s just one link in a chain where every component has a specific job to keep the air conditioning system working. However, when your air conditioner is blowing lukewarm air, there’s a good chance the condenser has something wrong with it because it’s an integral part of this system.

Getting to the bottom of your bad AC condenser problem is a good idea because it can protect other components inside your air conditioning system from damage and can even save you from serious car problems in the future.

Take the time to figure out the root cause of your air conditioning issue before it has the chance to escalate.