Home › Knowledge Base › When Good Parts Go Bad: Is It a Bad Alternator or Bad Battery?

You climb inside your car, turn the key in the ignition, and…nothing happens. You know something’s wrong (cars are generally supposed to start, after all), but you don’t know exactly what the problem is.

There are four common possibilities: your alternator has gone bad, your battery is dead, the starter is cooked, or you’re in the wrong car. But how do you know which is the culprit?

We’re going to assume that you can pick your car out of the parking lot, but in the guide below, we’ll show you how to determine if it’s the battery or alternator that you have to worry about.

What Do the Battery and Alternator Do, Anyway?

Your battery and alternator perform very similar functions, so it’s easy to get the two confused. Before you can start to determine which is responsible for your car trouble, though, it’s important to realize what they do.

Once the car has started, though, the battery’s job is largely done (it also stabilizes the voltage to your car’s electronics to prevent a power surge from damaging them, but that’s beyond the scope of this article).

When the car is up and running, the alternator takes over most of the electrical work. The alternator powers most of the car’s electrical components (like the headlights, stereo, navigation system, that Minion Nativity scene you have on your dash, etc.) — and it recharges the battery so that it’s ready to go the next time you need it.

That means that, technically, if your car won’t start, it’s always the battery’s fault (unless it’s the starter, but don’t confuse us right now — we’re just talking about batteries and alternators). That doesn’t mean that the battery is bad, however.

How to Tell if You Have a Bad Battery 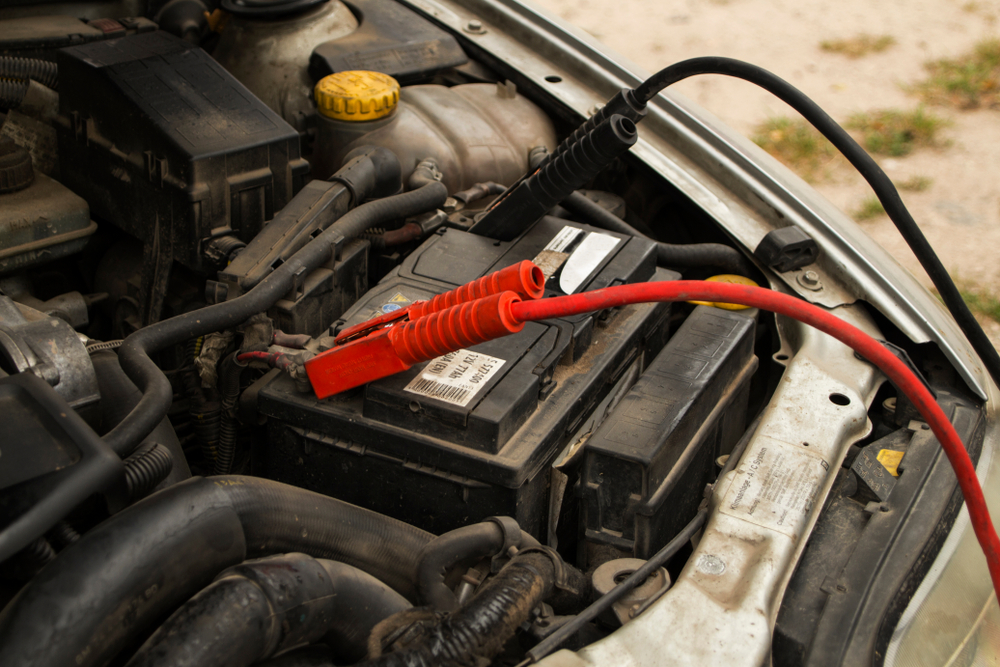 If your car won’t start, the battery should be the first thing you suspect. While the alternator can also cause a failure to start, alternators tend to last a lot longer than batteries do (6-10 years compared to 3-5).

That doesn’t mean that you should just assume that it’s the battery, though. Instead, there are a few things you should look for in order to be sure.

The Battery Warning Light Is On

Most modern cars have diagnostic systems that can warn you of any problem with your vehicle, including a bad battery.

If you notice a little battery light is illuminated on your dash, take your car at its word and assume that the battery has kicked the bucket.

It Works Immediately When You Jump-Start It

If you have jumper cables or a jump starter on hand, you can hook them up to the battery and see if they get the car running again. If it fires up right away, it’s likely that the battery was at fault.

You can jump-start a car with a bad alternator, but you’ll need to charge the battery for 3 or 4 minutes first.

Also, pay attention to the car’s electrical components once it’s up and running. If everything is working fine, that means it’s probably the battery that was causing the problem. If, however, the lights are flickering and you’re noticing other problems, then it’s probably a bad alternator.

Your Lights Are Instantly Dim

If you turn the car on and both your headlights and interior lights immediately go dim, then it’s the battery. On the other hand, if they start off strong and weaken the longer the car is on, then that means that the alternator is failing to keep them supplied with juice.

The Car Clicks or Starts Sluggishly

When you turn the key, if you hear clicking or the car starts slowly, it’s a sign that the battery is dead or dying. That means that the alternator tried to charge the battery, but the battery wasn’t able to hold the charge.

Your Battery Is Old or Damaged

You can also just use logic to diagnose the problem. If you know your battery is getting old, or you’ve noticed the terminals are corroded or the case is warped, then it stands to reason that the battery is the problem.

This isn’t a fool-proof diagnostic method, of course, but it shouldn’t steer you wrong too frequently.

How Much Will a New Battery Cost?

Batteries are moderately-priced parts, and they’re usually cheaper than alternators. They usually run between $50 and $120, although some cars require special batteries that are more expensive.

You should understand, however, that cheap car batteries are usually cheap for a reason. If you want one that will last as long as possible, be prepared to shell out for a higher-end model.

The good news is that many auto shops will install it for free, or you can easily do it yourself, as it’s a simple operation.

How to Tell if You Have a Bad Alternator 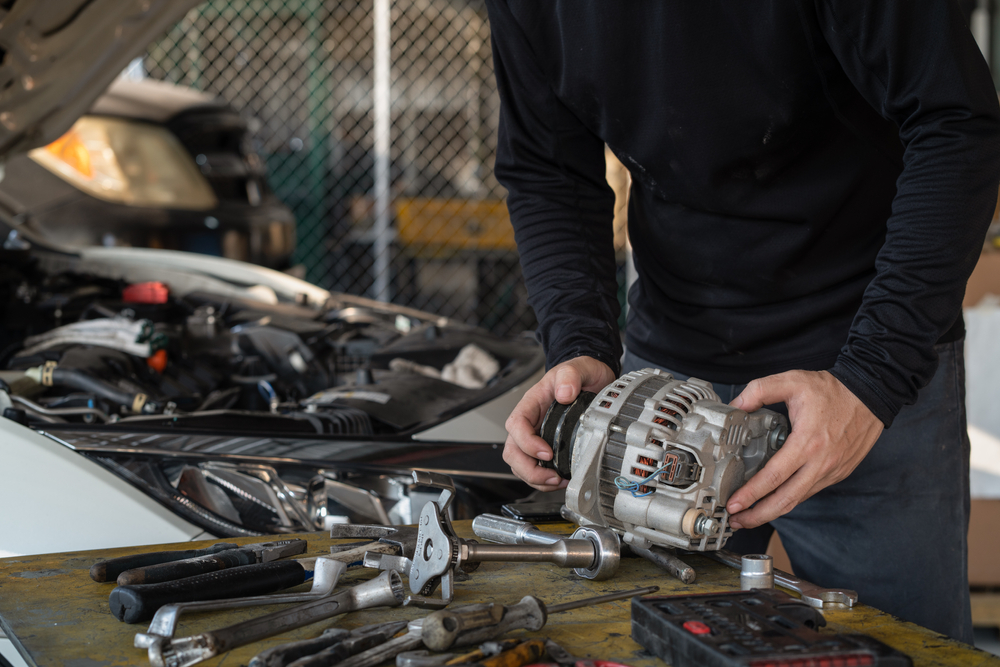 Since alternators last a lot longer than batteries, it’s relatively unlikely that it will be the problem. However, they do go out, so you can’t dismiss the possibility entirely.

Below are some things to consider if you think your alternator might be at fault. We’ve mentioned a few signs of a bad alternator above, so we won’t rehash those below.

You’ll notice that many of these are similar to the telltale signs of a dead battery, and there will be an element of guesswork involved. This isn’t an exact science, and you’ll have to take your car to a mechanic to know the answer for certain.

The Alternator Light Is On

Just like with a bad battery, your dashboard is the best place to start looking. Your car will also alert you to the fact that your alternator has gone out.

There’s a catch, though: the alternator light is usually the same as the battery light. Many cars will have an additional light that says “ALT” if the alternator goes out, though, whereas that light won’t come on if the battery dies.

The alternator is usually connected to the crankshaft by a serpentine belt. If the belt fails or stops turning freely, it will start to heat up from all the friction.

Eventually, the belt will start to smell like burning rubber or an electrical fire. If you detected a strange odor before the problem started, it’s likely that the alternator is at fault.

You Hear Growling or Whining Noises

This is another issue that’s related to the serpentine belt. If it gets misaligned or jammed, it will start to produce growling or whining noises.

Of course, a growling noise could also be a sign that there’s a mountain lion hiding somewhere in the car. While rare, that’s generally considered a much more serious problem than a bad alternator.

The Headlights Brighten and Dim

If your headlights get brighter when you accelerate and dim as you stop, then that probably means that your alternator is providing inconsistent voltage to the electrical components.

You may also notice other electrical issues, such as power windows acting sluggish or your seat warmer failing to work.

How Much Will It Cost to Replace the Alternator?

The cost of an alternator will depend on where you get it from. Most quality alternators will cost between $150 and $250 when they’re brand-new, but many people try to save money by getting rebuilt alternators instead.

While a rebuilt alternator (or a used one that you pull off a dead car at a junkyard) will be cheaper, don’t expect it to last as long.

Also, the figure above doesn’t factor in the cost of labor. All told, it usually costs between $300 and $500 to replace an alternator, but that number could be quite a bit higher if you have a higher-end car.

You can also replace it yourself if you’re handy enough.

Can You Drive With a Bad Battery or Alternator?

You can — for a little bit, anyway. Exactly how long depends on the kindness of your friends or strangers.

If the battery is bad, then the car should run fine once it’s been started — but getting it to start is going to be an issue. You’ll have to jump it every single time, so carry some jumper cables and hope people will take pity on you in the parking lot.

Also, since the battery regulates voltage to your car’s electrical components, you shouldn’t drive with a bad battery any longer than you have to. Otherwise, you risk having a power surge that could damage any number of parts.

If the alternator is shot, on the other hand, the clock is ticking. You’ll likely be able to drive the car for a little bit, as the car will draw on the battery for its electrical needs. The longer you drive, though, the more sluggish your car will become, and eventually it will stop entirely.

That means you should turn off all the electrical components you can spare, like your radio, air conditioner, and lights (only in the daytime, of course). Then, drive to the nearest mechanic, taking pains to avoid stop-and-go traffic. 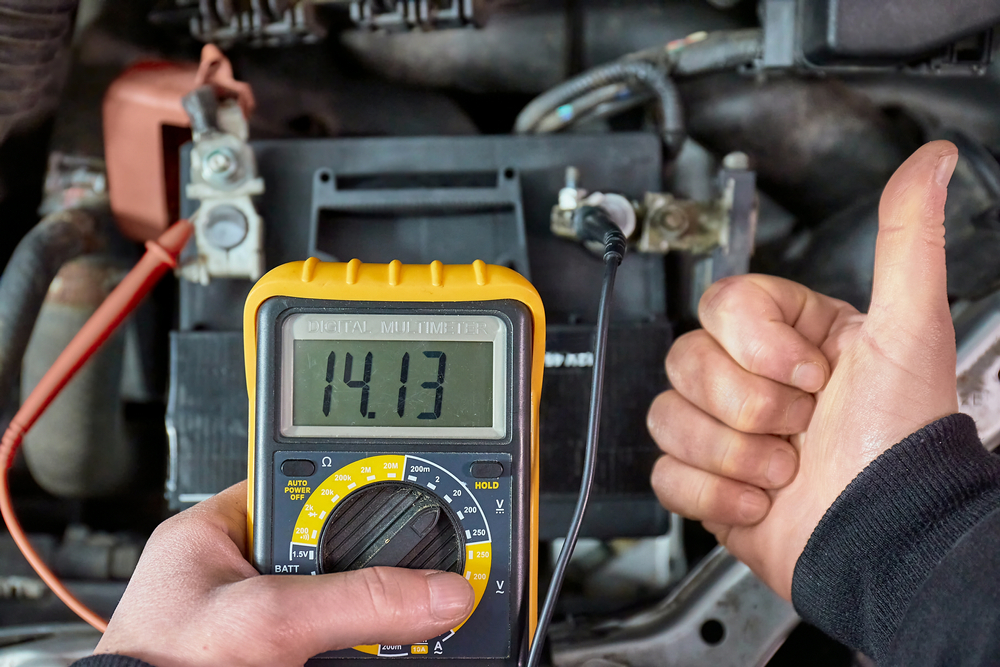 If your car won’t start, either your battery or alternator are likely to blame. Figuring out which one to replace, however, can take some time and effort.

Fortunately, replacing either one is fairly straightforward (and replacing a battery is fairly cheap as well). You can be up and driving again in no time at all.

If it turns out you were in the wrong car, however, you have more problems than we can help with in a single article.