You probably don’t think much about your car’s differential. That’s because if the differential is doing its job, you’re not supposed to notice it. We’ll explain why later, but simply put, without a differential, your car would be very uncomfortable when you drive around corners.

If your car is misbehaving in the curves, your differential might be damaged. We’ll tell you the signs to look for, explain how the differential works, and give you some options on how to solve the issue.

Symptoms of a Bad Differential

A bad or failing transmission will usually present itself in three different ways. Differentials don’t usually fail catastrophically unless you are pushing your vehicle to the limits by racing or offroading, so most symptoms will start out mild and get worse over time.

The first symptom that you will notice is probably unusual sounds. When a differential first starts to fail, it will squeak or clunk at fixed intervals. The frequency will often be directly linked to your wheel speed. The faster you go, the higher the pitch, or the more frequently you hear a rhythmic clunking.

The noise is very similar to a bad wheel hub or wheel bearing. This video does a good job breaking down the different noises, so give it a listen if you hear an unusual noise.

Also, note that you can differentiate between hub noises and differential noises very quickly if you know your car’s power layout and have a friend who can help. If you drive by your friend in a front-wheel drive car (meaning the differential is in the front), and the loud noise is coming from the back right corner of your car, you can probably eliminate the differential as a cause.

There are two ways that a bad differential affects driving feel. The first can be difficult to detect if you do mostly highway driving. When you enter into a turn, a dragging tire may, at some speeds, vibrate. You’ll feel that vibration through the entire cabin. However, since it only happens sometimes while cornering, it can be difficult to notice.

The second way is much more noticeable. A bad differential will cause your car to have a much more difficult time making sharp turns. If you go to pull a u-turn or make a tight turn into a parking spot and find out that your car is no longer capable of it, that’s a sure sign the differential is having issues.

If your differential has been stiff or failing for a while, your tires will begin to wear down much more quickly than normal. As your car corners, it will be spinning one tire faster than the other or dragging a tire across the asphalt. That will grind down the tread quickly. Usually, it will grind them down unevenly, so you will notice that only the inside of your tires are worn smooth.

Is Driving With a Bad Differential Dangerous?

It’s not dangerous in the sense that the differential can fail and cause you to roll over, but it will eventually lead to driving issues. The worst thing that can happen is that the differential breaks entirely, and power stops going to your wheels. If you are on the highway when that happens, you’ll have to coast to the shoulder and stop as soon as possible.

What will happen is that the longer you drive with a failing differential, the more expensive it will get. You’ll be forced to replace tires sooner than you’d like, drivetrain components will wear out faster, and you risk hurting other components like brake discs and wheel hubs. The sooner you can fix the issue, the better it will be in the long run.

Your transmission and drivetrain, though, push power to the drive wheels at the same time. To allow one wheel to turn faster than the other, the driveshaft is connected to special gears that allow power to go to the wheels or free-wheel. That special gear assembly is called a differential.

If you want to know more or prefer visuals, this old black and white video from General Motors is probably the best informational video ever made on the subject. The only thing to keep in mind if you watch the video is that it was made when front-wheel drive vehicles were very uncommon. Nowadays, most vehicles don’t have a rear drive train, and the differential is housed inside the transmission.

Cars and trucks have one or more differentials. They can be configured in a variety of ways, so you may need to do some research if you suspect you have a bad differential. There are five main configurations.

FWD, front-wheel drive, cars have the engine, transmission, and differential in the front. Usually, the differential is integrated into the transmission, which makes them difficult to service. Fortunately, they still tend to be on the cheaper side because the parts are very common.

Subaru’s all-wheel drive is different from the FWD cars converted to AWD. A Subaru is more like a truck or rear-wheel drive car where the transmission is attached to both a front differential and a rear differential.

Cars that are rear-wheel drive have a differential in the rear. These were the most common types of configurations until the late 1980s and are still very common in trucks and performance-oriented cars. These differentials are often much easier to service since they are easy to get to.

4×4 trucks and SUVs work similarly to the Subaru AWD system, with one large notable difference. Instead of the transmission being connected directly to the front and rear differential, there will be a transfer case that allows you to select two-wheel drive or four-wheel drive. Most transfer cases also allow you to select a high range or a low range.

There are a handful of differentials built just for special circumstances. A transaxle is a special type of transmission, axle, and differential combo found in rear and mid-engine cars. A center differential is found on some 4x4s and 6x6s to lock the front and rear wheels together in addition to the left and right wheels.

In addition to location, there are many different types of differential. Car and Driver has a good rundown of all the types, but we’ll look at the three main ones here.

Open differentials are very simple. They are usually found on older vehicles, cheaper vehicles, and vehicles that are built for maximum efficiency. They simply allow each wheel to spin at a different speed when necessary.

On loose terrain, it’s easy for one wheel to slip but not the other. With an open differential, the vehicle treats that identically to one wheel turning faster in a corner. The slipping tire will just spin while the other remains stationary. By locking the tires together, you can pull yourself out of a slippery situation.

There are a few different designs that allow a differential to be limited slip. Many have fluid filled bodies that engage extra gears when excessive slipping is detected or under hard acceleration. They are generally found on high-performance cars. 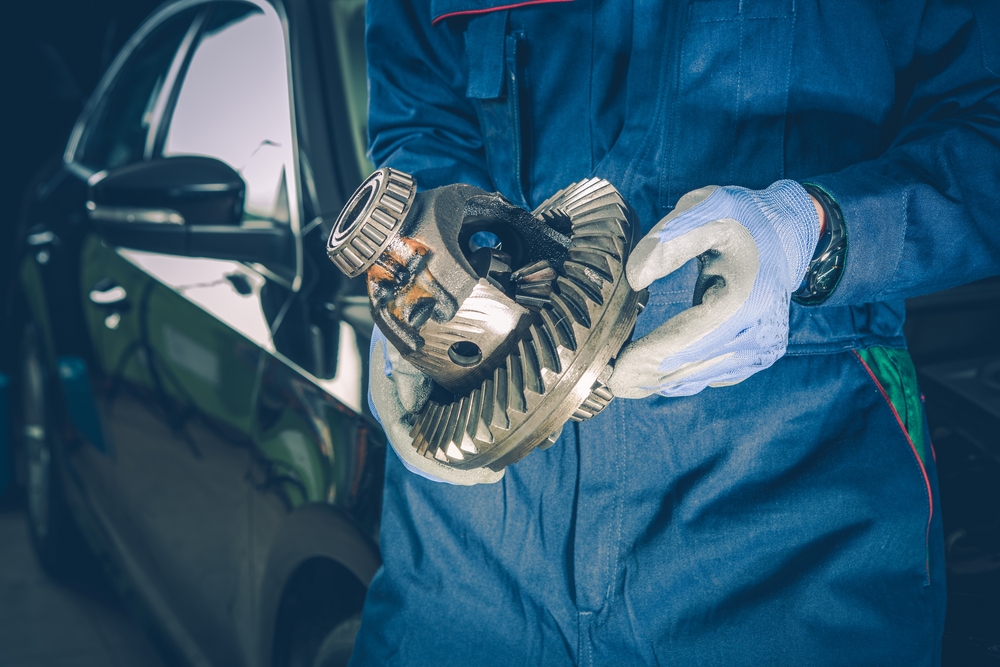 There is no one size fits all answer to how to fix a bad differential. There are simply too many different combinations of differential types and configurations.

We can, however, outline the most common solutions you’ll come across. All of these solutions can be performed by a transmission shop and most mechanics. We recommend paying a shop to do it rather than doing it yourself unless you have experience working with drivetrains and clean practices.

A full rebuild is much more expensive than a partial rebuild but can give you a lot of extra confidence in your vehicle. What happens in a full rebuild is that the entire differential is taken apart, and all the seals, bearings, and damaged gears are replaced. This can greatly extend the life of the differential.

A full rebuild is usually cheaper than buying a new replacement but can still be rather expensive due to the amount of labor required. You can easily spend $1,000-1,500 depending on the type of vehicle.

There are two routes you can take when replacing a differential. You can simply buy a new one from the factory. That will run you about $2,000, including the labor to install it, although you may be able to find an aftermarket one cheaper.

The other option is to find a used differential. Most pick and pull junkyards will sell you the entire differential, and they are as good as new after a partial rebuild. You can either use the parts from it to rebuild your current differential, or swap it out entirely. Used differentials vary wildly in price depending on where you find them.

You might even be able to pick one up for free if someone is parting out a vehicle in your neighborhood; unless they are special, they don’t have much aftermarket value.

A good option if you are upgrading other parts of your car is a differential upgrade. It can give you a chance to switch to a locked or limited-slip differential for performance or change the final gearing to suit your needs. It’s not uncommon for people to upgrade to stronger differentials as well. If you do a lot of engine upgrades or plan on towing often, a stronger differential can be a great investment.

It can be very annoying when your car doesn’t want to turn or makes funny noises. It can be especially annoying when the problem is a bad differential since it can quickly eat your tires and force you into costly repairs. We hope you can use this guide to get back on the road as fast as possible and back to turning in comfort.