We usually think of the engines as a monolithic piece of automotive machinery. But there are several components in and around the engine that make it possible for it to power our dream machines. One important component in that mix is the fuel injector. And unfortunately, like any other piece of the transmission chain, fuel injectors can go bad and require replacement.

Before you decide it’s time for a new fuel injector, it’s important to know that that is what’s causing problems with your vehicle. So in this article we’re going to do a deep-dive on fuel injectors and what your car does when the injector is out of whack. Before we get into those details, let’s complete our Fuel Injector 101 class so we have some background for what we’re looking at.

What Is a Fuel Injector? 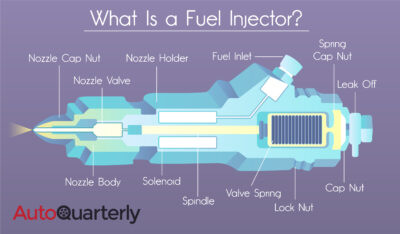 Thankfully fuel injectors – unlike, say, carburettors – are named in a way that gives us some insight into what they do. As you’ve probably guessed by now, fuel injectors inject fuel into the engine. They even look like vaccine shots meant for robots.

Fuel injectors are a key part of any vehicle’s fuel delivery system. They sit there waiting for just the right time to infuse fuel into the engine so it can combine with the air coming into the system and go through the combustion process.

In earlier times, manufacturers used to create fuel injectors that would spray fuel into a manifold chamber. The fuel would combine with the air at this stage and then enter the combustion system. But things have changed now and fuel injectors deliver fuel straight into the engine cylinder.

Modern vehicles run on the intelligence built into their Engine Control Unit (ECU). This is the brains of the operation and uses an array of sensors to keep track of what is going on within the engine. The fuel injector is brought into play by the ECU. When tagged in, the component sprays a mist of fuel into the engine so the fireworks can happen.

So now we have an idea of what fuel injectors are and what purpose they serve in a vehicle. This understanding will come handy in the next section, where we will discuss the symptoms that cars display when the fuel injector system has gone bad. These are the things you need to watch for in order to know whether it’s time to replace the fuel injector in your vehicle.

Symptoms of a Bad Fuel Injector 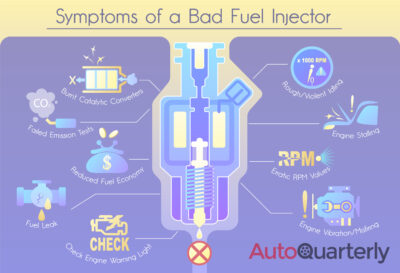 A bad fuel injector can mess with the fuel delivery process in a few ways.

In order for the process to happen correctly, just the right amount of fuel needs to be supplied into the engine at just the right time. If either the volume of fuel or timing of the injection is off, then your vehicle won’t run like it is supposed to. In some cases fuel injectors don’t supply fuel to the engine at all, which is also obviously a problem.

Let’s take a look at the different symptoms that arise from a fuel injector that isn’t in working order.

A lack of fuel entering the engine or badly timed fuel supply can have an impact on your vehicle’s ability to idle smoothly. This usually happens because the fuel injector is clogged with particles, leading to the fuel not atomising the way it should.

If this happens, you will begin to notice that your car’s idle noise is different or just feels a little rougher than it usually is. Now this can also be caused by issues with the spark plug or air filter. But if you notice this particular symptom, it’s worth taking a look at the fuel injector to see whether it’s clean.

Some car owners have experienced their engines stalling all of a sudden without their having done anything to cause it. This usually happens because the fuel injector has failed to deliver gasoline to the engine at the right time. As a result, the ECU will cut the engine off and your vehicle will stall.

If a fuel injector is responsible for this situation, then it could be because it is clogged or because there’s a fuel leak from the fuel lines. If it’s the latter, you’ll need to have a mechanic look at the vehicle for where the leak has occurred and plug it.

Bad fuel injectors don’t only lead to a lack of fuel in the system. In some cases, they could also spray too much fuel into the engines. When that happens, the engine experiences a sudden surge.

This problem will manifest itself in laboured acceleration of the vehicle. You will observe the RPM values are changing significantly even though the load is constant. This is because of the excess amounts of fuel entering the engine.

Experiencing an engine misfire is no fun. If it becomes a frequent occurrence, then it’s possible you’re dealing with a bad fuel injector. A blockage in the fuel injector nozzle can also cause a delay between pressing down on the accelerator and actually picking up pace.

These symptoms usually crop up because the fuel injector isn’t contributing adequately to the air/fuel mixture in the engine. This causes the vehicle to lose acceleration or misfire frequently. This makes it imperative to keep the fuel injector blockage-free.

The check engine warning light has been placed conveniently before us so we know when something is amiss with the engine. One of the most common reasons the light will go off is because the fuel injector isn’t doing its job.

Now it’s important to note that that isn’t not the only reason the light can go off. But it does go off when the ECU senses that the injector isn’t providing enough fuel to the engine. When you see the warning light go off on your dashboard, the fuel injector should be one of the parts you check.

Fuel leaks are easy to spot because they have that signature smell. If you notice any of the aforementioned symptoms and can also smell fuel, there’s a good chance your vehicle is leaking fuel.

Now a fuel leak doesn’t occur only within the injector. It could also happen in the fuel lines leading up to the injector. But if that isn’t the case, then it’s possible the fuel injector itself is leaking fuel. You can check the part and if it looks like it’s covered in fuel externally, then it’s leaking fuel and it’s time for a replacement.

When the fuel injector isn’t doing its job, your vehicle essentially begins to gasp for breath. And the way it does that is by calling more fuel into the system. But not all that fuel is used efficiently to power the vehicle.

What happens as a result is that you will notice your fuel economy drop all of a sudden. If it happens gradually, there can be other reasons. But if you’re suddenly not getting enough miles on the gallon, then you should definitely take a look at your fuel injector.

This is one of the more insidious symptoms of a bad fuel injector. When the part isn’t fully functional, there will be some fuel that isn’t burned off like it should and reaches the exhaust, impurities and all. If your car happens to require an emission test when this happens, it’s possible you fail the test because of the faulty fuel injector. So if you happen to fail an emission test and can’t figure out why, the fuel injector is one of the parts you should take a look at.

In some extreme cases, a dysfunctional fuel injector can lead to a damaged catalytic converter.

A catalytic converter’s job is to take the products of the combustion process and rid them of noxious elements like carbon monoxide and certain nitrides. When the fuel injector isn’t doing its job, the engine works with an air/fuel mixture that isn’t in the right proportion. This in turn makes the catalytic converter work on overdrive to purify the rich fuel entering the system, leading to its scarification.

We’ve covered all of the main symptoms of a bad fuel injector. Now let’s talk about what you do if you do have that problem. Before you can think about replacing the component, you should know that cleaning it could help. So let’s talk about the price of doing that first.

Cost of Cleaning a Fuel Injector

Cleaning your fuel injector can save you a lot of money and having to deal with persistent problems. It is usually recommended that you can clean this part every 30,000 miles or so. This will ensure the fuel injector doesn’t clog up and can continue to deliver fuel optimally.

There are two ways you can get the fuel injector cleaned.

Fuel injector cleaners are easily available and you can carry out maintenance easily yourself. A bottle of cleaner costs about $10 to $20 in the United States. We’ve put together a guide here if you don’t have experience on how to use fuel injector cleaners.

It is possible that your fuel injector gets so clogged that running some cleaner through it yourself won’t do the job. That’s when it’s time to call in the big guns. A professional fuel injector cleaning will run you between $75 and $100.

If you don’t mind not being able to drive your car, then you can ship your fuel injector to certain companies that do the cleaning and send it back to you. This is easy to do because of how small the part is and easy to ship.

Cost of Replacing a Fuel Injector

We saw that cleaning a fuel injector is usually an affordable undertaking. But replacing one is not the same at all. Getting new parts can cost up to $1,200. Then there’s the labour costs, which will come up to around $300. So overall, you’re looking at about $1,500 to replace a fuel injector.

Now you’re probably wondering if spending that money on a single part is worth it. And the answer really depends on where you are in your journey with the car you’re currently using. If your car doesn’t have too many other problems and is relatively new, then you should consider the replacement.

If not, we saw that a bad fuel injector can eventually lead to a bad catalytic converter. And replacing those costs even more than it does a fuel injector.

Replacing a fuel injector costs a lot of money and nobody wants to have to deal with that. The best way to preclude that situation is to maintain your fuel injector well. Here’s how you can do that.

We saw earlier that it is possible to clean your fuel injector yourself. It doesn’t take a lot of technical know-how and costs only about $10 per bottle of cleaner. So you should be cleaning your car’s fuel injector at least every 30,000 miles.

The right mix of fuel additives can keep your overall fuel delivery system in good health. The additives circulate through the system and keep the fuel filters clean and free of fungus. We’ve compiled a list of the best diesel fuel additives here.

Fuel filters keep small particulate matter from damaging the fuel injector. They’re an important line of defense against damage to the injector. Replacing a fuel filter is a lot cheaper than replacing the injector, so consider doing that frequently, especially if you live in areas that experience a lot of dusty or windy weather.

The long and short of it is that you can’t really enjoy driving your car if your fuel injector isn’t firing on all cylinders. We’ve taken a look at all of the symptoms that pop up when it isn’t. Keep a close eye on your car for any of those signs and take it down to a mechanic immediately if the issue persists.