Modern cars are pretty quiet; it’s very nice. You can blast the tunes and get into the rhythm of the road without having to worry. That is until some unusual or annoying noise breaks the illusion, and you are reminded that cars are complicated mechanical devices. One of the most annoying noises your car can make is the dreaded bearing squeak.

If you have a squeaking or grinding coming out from your motor, it might just be a bad idler pulley. In this article, we’ll look at what the idler pulley does, pulleys in general, and how to replace an idler pulley.

Symptoms of a Bad Pulley

How to Test a Pulley

The only way to know for sure which pulley is bad is to take the belt off and test them.

First, make sure you mark the belt or do whatever else is necessary to help you put the belt back on correctly. It can be really beneficial to draw the path on a piece of paper if you aren’t very familiar with belts and pulleys.

Some vehicles will have multiple belts. It is usually obvious where the belts go, since they will be radically different lengths, but it’s still good practice to label them.

Follow the instructions in your manual for loosening the main belt. Usually, there will be a tensioner pulley that has room to insert a breaker bar or socket wrench. You put pressure on the wrench, which moves the pulley out of the way and allows the belt to slip off.

On some vehicles, the tension might be adjusted using a bolt on the alternator or other component. In that case, simply loosen the bracket holding the component, adding tension, and slide it out of the way.

Removing the belt is usually a simple process. You might need to snake it around some components or fans, but they are wearing items and are meant to be replaced from time to time.

Some cars have very awkward belt removal processes and require you to remove large components to get the belt off. On these cars, we recommend inspecting the belt and only taking it off if it requires replacement. You can check the pulleys without removing the belt entirely; it just may get in the way and need to be held aside.

Spin the Pulleys by Hand

Pulleys should be easy to turn by hand. Except for the large pulley on the crankshaft that drives all the other pulleys, but that one won’t be the squeaking pulley, so that’s fine. Give them all a spin and keep an ear out for the telltale squeak.

You will also be able to feel a damaged pulley as you spin them by hand. It will rattle or feel abnormal in some way. The pulley should spin in a uniform way and feel solidly mounted; if it doesn’t, then you’ve found your culprit.

Is It Dangerous to Drive With a Bad Pulley?

When a pulley first begins to fail, the only thing you risk is your sanity. The squeaking will get louder and louder over time until it’s unbearable.

However, if the pulley fails completely and breaks, then it can cause serious damage to your motor. Not only will all of your accessories lose power when the belt slips off, but the pulley and belt can fly around your engine bay with enough force to damage other parts.

What we recommend is periodically inspecting your accessory drive belt or serpentine belt. Make sure to check the tension and replace a bad pulley if the sound is getting louder.

What Is an Idler Pulley?

The idler pulley itself isn’t very interesting. It’s sort of like a skateboard wheel bolted to the front of your motor, and it doesn’t power anything. It’s just for guiding the belt; you can see two of them in the following picture, along with a tensioner that is about the same size. 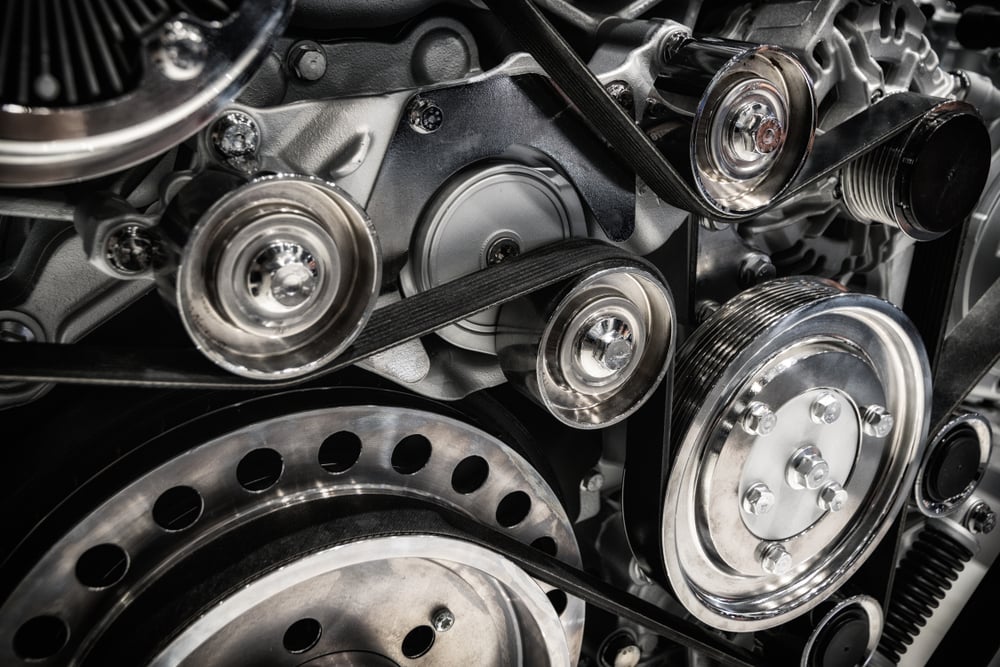 Your motor is a really important part of your car. Not only does it need to put power to the wheels so your car will move, but it also has to drive just about every other system on your car. It drives some indirectly by charging the battery, which then powers all your electronics, and it drives others, like the AC, directly.

Chances are good that your accessory drive belt follows a pretty crazy path. Engines are designed to be as compact as possible while still being serviceable, and that often means that the accessories get stuck in awkward spots. The belt needs to reach all the accessories without looping or interfering with other components.

That’s where the idler pulleys come in. They route the belt away from components that would otherwise be in the way while still allowing maximum power transfer by keeping the belt tight and direct.

Idler pulleys need to be able to spin millions of times during their lifetime. However, like all bearings, heat and minor imperfections will slowly ruin the balance of the pulley. When the pulley gets unbalanced, it exaggerates the heat and imperfection issues.

Eventually, the bearings begin to break down entirely. Spots along the bearing surface will “stick” or fail to rotate, and that causes a chirping noise as those spots scrape against the smooth axle it rotates on.

The idler pulley is spinning as fast as the engine spins, which can mean, at minimum, it’s spinning around 800 times per minute. That high-frequency chirping creates that whine or squeaks that you hear driving down the road.

How to Replace an Idler Pulley

Replacing an idler pulley yourself is usually an easy thing to do. We outlined removing the belt up above, and that’s probably the most difficult part. You do have the option of taking it to a mechanic, though, so let’s look at both options.

Taking It to Your Mechanic

Most auto shops will be able to replace a squeaking pulley without much fuss. You can expect to pay about $150, and most of that is simply for an hour of labor.

You should consider replacing the belt at the same time. Since most of the cost is in labor, and they have to remove the belt anyway, it’s a good chance to take care of some preventative maintenance.

We go over the belt removal up here, but the basics are:

The broken pulley will have a bolt in the center of it. To remove the pulley, you just have to pull that bolt out. That might be simpler said than done, though, because if the pulley has heated up and distorted, the bolt may be very stuck.

Most pulley bolts need around 40lbs of torque to set correctly. If you are installing the pulley into an iron block or a steel bracket, the exact torque specs are not that important. Just tighten the bolt snugly with a medium-length wrench, then tighten it a little more for good measure.

If you are installing the pulley into aluminum, though, it’s very important to find the correct torque specifications. You’ll be able to find them online or in a service manual. Aluminum is pretty easy to damage and stretch, and over-torquing a bolt can make it impossible to remove in the future.

There are just two things you need to be aware of when installing a serpentine belt. The first thing to know is that belts have two sides. The ribbed side is the inside, and the smooth side is the outside. Often the pulleys it routes around will match the side of the belt they press against. Smooth pulleys press on the outside, ribbed pulleys sit on the inside. It’s only a general guideline, though, and not a hard rule.

The other thing to be aware of is that some cars are very picky about the amount of tension the belt has. Most cars have auto-tensioning systems. If you have to pull a spring-loaded pulley out of the way to remove the belt, then it’s auto-tensioning. If you loosened a component like an alternator to loosen the belt, you would need to check the manual for tension specs.

Tension is usually easy to understand and doesn’t require any special tools. A good rule of thumb is that there shouldn’t be more than a fingers-width worth of deflection in either direction. So just find the longest span between pulleys, and gently tug up and down on the belt. If it deflects less than the width of two of your fingers, you are good to go.

Squeaking pulleys can quickly become a sound you hear in your nightmares. Don’t let it get that bad. The solution is inexpensive and easy, and we hope this guide has inspired you to swap out the bad pulley and claim your sanity back.