Oxygen sensors, or O2 sensors if you are short on time, are essential for keeping the air we breathe, well, breathable. Every car will have at least two of them, and when one fails, it can cause a handful of annoying issues. The worst issue, though, is that your car will fail inspection if the O2 sensor is bad.

In this article, we’ll tell you what to look for if you think your O2 sensor might be bad. We’ll also explain what they are and walk you through how to replace them. That way, we can all help keep the planet a bit nicer, or at least save some money on fuel.

Symptoms of a Bad O2 Sensor

A bad oxygen sensor can cause a few small issues, but there is one surefire way to tell if a sensor is bad.

The Check Engine Light Is On

The ECM (or ECU/PCM depending on your car) is your engine’s brain. It’s a computer that manages the air, fuel, and diagnostics on most cars, and when something goes wrong, it generates what is known as a fault code.

When it generates a fault code, it will let you know by illuminating the CEL or check engine light. Since the O2 sensor is one of the primary engine sensors, they will absolutely generate one or more fault codes when they fail.

Modern car computers use the OBD2 standard. All you need to read the fault code yourself is an OBD2 reader, like the ones we recommend here. If you get a P0167 code, then congratulations, you have a bad O2 sensor.

You can also monitor and test O2 sensors using an OBD2 reader of sufficient quality. Here is an entire article about doing that. If you have the equipment necessary, it might save you a few dollars since you can narrow it down to a single sensor rather than replacing all of them.

A single oxygen sensor failure on a car usually won’t give off other symptoms immediately. Cars have multiple O2 sensors and can usually run ok if one goes out. They won’t be running at 100% efficiency, but the average driver probably won’t notice the decrease unless they obsess over their MPGs.

However, some cars are very sensitive to sensor issues. Some conditions can make the symptoms much more noticeable. These are the other symptoms caused by a bad sensor.

What Is an O2 Sensor?

Some cars have more than two. Cars with two engine banks, like Subaru’s with their opposed engines or any muscle car with a V8, will have three oxygen sensors. One per exhaust manifold, and one after the converter where the two halves merge.

Cars with dual exhaust or other cars that have multiple catalytic converters will have four sensors—one before and after each of the converters.

It’s important to measure the amount of O2 in the exhaust system because it can tell you whether or not you are getting a complete burn. When your engine is running as efficiently as possible, it is burning up all of the fuel and air in the cylinder.

That means that if there is extra fuel or air in the exhaust, you aren’t getting an efficient burn, and the O2 sensors will detect that. The car’s computer uses those sensor readings to alter the fuel to air ratio until the engine is running more efficiently. The ratio of fuel to air is known as lambda (λ), which is why O2 sensors are sometimes referred to as lambda sensors.

There are two reasons we want as efficient a burn as possible. The first is easy enough to understand; the more efficient the motor, the less gas it burns to make the same power. That’s good for your bank account.

The second reason is that unburned fuel is the primary cause of smog and other pollution caused by cars. Incomplete burns cause carbon monoxide, which is deadly, and other heavy particles that contributed to the haze that blanketed major cities in the 70s.

When a sensor goes bad, it won’t be able to send the correct readings to the computer. These bad readings will cause the computer to try to adjust the lambda curve to meet false conditions.

Usually, a bad O2 sensor will cause the computer to add more fuel leading to a rich mixture. That isn’t a rule, though, sometimes an oxygen sensor can send a “false positive” signal where it tells the computer that everything is great when it isn’t. 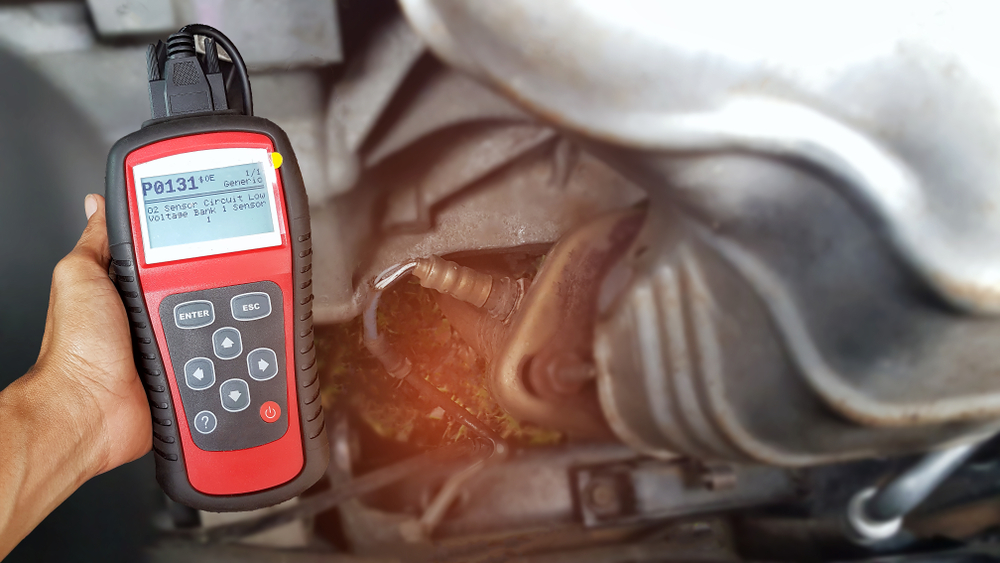 If you suspect that one or more oxygen sensors have gone bad on your car, then there are a few simple tests you can do to confirm it.

O2 sensors are meant to be replaced every 75k miles or so. That means they should be easy to access and relatively inexpensive to replace. You can pay a shop to do it, and they will usually be able to do it in a short amount of time.

You can also do it yourself if you have simple hand tools. The hardest part is that they are usually located under the car, so you will need to crawl around a bit.

A sensor can be replaced in about an hour, meaning the labor cost is relatively constant regardless of vehicle make or model. You can expect to pay between $75-150 depending on where you live and what kind of shop you take your vehicle to.

The big variable in price will be the cost of the O2 sensor itself. Depending on your make and model, as well as whether it’s the upstream or downstream sensor, you can pay as little as $20 for the part or as much as $300.

Replacing an O2 sensor is as simple as disconnecting the single electrical connection and unscrewing it with a wrench. If you want to do it yourself, we have some tips.

Save the Air, and Save Your MPG

A bad O2 sensor is bad news. Generally speaking, being able to breathe clean air is good, and saving money because you don’t have to buy extra fuel is also good. O2 sensors help keep the air clean and your fuel economy as good as it can be, so we hope that this article has inspired you to think about the humble sensor and consider replacing it if it’s gone bad.