An exhaust leak can really cramp your style. First, it can be downright bad for your health. Plus, no one will think it’s cool if you drive up to a car meet, and your raspy, rattling ride stinks of unburned gas the minute you drive up.

Use this guide to get it fixed. We’ll talk about what the symptoms are and how to tell if the exhaust is leaking. Then we’ll touch on why those symptoms can be dangerous. Finally, we’ll give you a bunch of options on how to fix the issue, whether you do it yourself or take it to a shop.

Symptoms of an Exhaust Leak

Before we start, it’s helpful to go over what an exhaust leak is. That makes locating and understanding the symptoms a bit easier.

What Is an Exhaust Leak

A system is usually made of the following parts connected by lengths of pipe.

Modified cars often have various components of the exhaust system upgraded or removed entirely. The individual parts are restrictive, and a restrictive exhaust lowers the amount of power a motor can produce.

If an exhaust system leaks, it’s usually from one of two spots. The first place is at a joint. Many of the connections between components have gaskets that can fail and bolts that can loosen and ruin the seal.

The second place it can leak is through a hole in a component or length of pipe. This is really common in places where it snows. The moisture and salt on the road spraying on the exhaust system can cause the pipes to corrode quickly.

There are a variety of symptoms that will assault all your senses, which makes them hard to ignore. The following are ways you can use each of your senses to find an exhaust leak.

You can often simply observe an exhaust leak. If you start your car and the white, cold-start exhaust plume comes from near your front wheel instead of behind the car, it had to come from somewhere it wasn’t supposed to.

Even when you can’t see the exhaust itself, it’s often easy to use visual cues to find a leak. You may start your car and notice puffs of dirt coming from underneath the car.

Or you may simply see the hole in the exhaust if you look for it. When an exhaust pipe has a hole in it, it’s usually not small and hard to notice. The holes are usually big jagged tears that are more than an inch in length.

Exhaust leaks make all sorts of unusual noises. It’s difficult to explain unless you know what an unmuffled exhaust sounds like, so instead of trying to explain, we are just going to link you to some examples.

In this video, you can hear the “rasping” sound that is associated with an exhaust leak that occurs later in the system.

By contrast, this video by a very enthusiastic man is what an exhaust leak that is very close to the engine sounds like.

Neither of them sound like a normal engine, and that’s the key take away. If your motor doesn’t sound “right” or it’s suddenly louder than normal, it’s probably an exhaust leak.

Touch is one of the easiest ways to find the location of the leak itself. The hot exhaust gases are flowing out of the leak just like a hole in a garden hose. You can use the back of your hand and feel the hot gasses coming out from a leak. Just don’t actually touch the exhaust system itself because it will burn you.

Can you taste an exhaust leak? Actually, yes, most people can. We don’t mean for you to lick the exhaust pipes, that’s a really bad idea. But taste is closely linked to smell, and gas has a very distinct flavor. You can absolutely taste the unburned fuel and fumes if they begin to fill your cabin from an exhaust system with a severe leak. 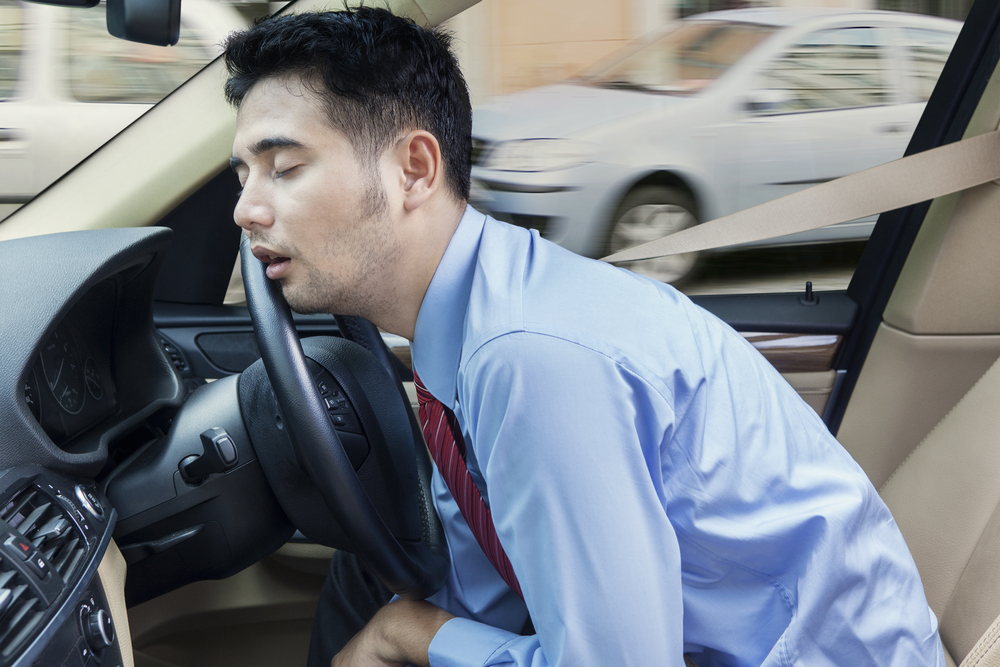 Once you have come to the conclusion that you do indeed have a leaking exhaust, there are some dangers you should know about.

Can You Drive With an Exhaust Leak?

The biggest danger that an exhaust leak poses is to your health. Exhaust gases are harmful, and breathing them in because the exhaust is leaking into your car is a bad idea. The effects can range from mild irritation to extreme drowsiness caused by carbon monoxide poisoning, the latter of which can kill you or cause you to crash your car.

If you must drive with an exhaust leak, drive with the windows down in order to vent the exhaust gases and keep a constant supply of fresh air in the vehicle. Driving to a mechanics shop or down the road probably won’t hurt you, but prolonged exposure will.

Will It Damage Your Car?

Unless the leak is very major or occurs before the oxygen sensors, then it doesn’t pose much of a risk to your engine. You may notice that your car has slightly less power or gets worse gas mileage.

Still, as we mentioned before, some people intentionally remove exhaust components or run “open headers.” The engine will be fine. The greater danger is to you and other people.

It may be possible for most people to repair the exhaust system depending on where the leak occurs. That means the first step is to locate the leak. There are actually a lot of methods to do that. You can simply choose the one that is the most accessible to you.

The easiest way to solve an exhaust leak is to simply replace the part of the exhaust that is leaking. If there is a hole in your driver’s side manifold, for instance, you can buy a new manifold and replace it.

The problem is that prices will vary wildly depending on the component. An exhaust donut, or pipe flange gasket if you aren’t hungry, is the gasket between the manifold and the rest of the exhaust system. They are common failure points and generally cost around $15.

If replacing the component is not an option due to price or location, then it is possible to patch a small hole. People will also generally patch a hole if it’s just on a length of connecting pipe since it doesn’t make sense to replace four feet of pipe just to fix a tiny hole.

There are a lot of methods to patch an exhaust hole. This list will include the three most common, but you can find other methods online or by talking to a parts store clerk since there are constantly new ways being invented.

If you are comfortable welding, you can just weld in a plug. This is how most shops will solve the problem, and if you have a crack where two pipes join, it is probably the only option.

Welding is usually the best solution because it’s permanent and can patch any hole. The downside is that most people don’t own welders. Even if they do, welding an exhaust pipe is tricky and requires practice.

A band clamp is just a piece of metal that can be clamped around a length of pipe. They are inexpensive and only require a wrench to install. You simply slide the clamp over the hole and clamp down. It will seal the pipe.

Some people will wrap the pipe in aluminum or exhaust tape first. That’s not strictly necessary, but it can help seal the exhaust if the clamp loosens over time. The biggest downside is that the hole must be on a straight length of pipe for this to work.

A muffler sealant is a goop that you just squish into a hole in the exhaust. There are primarily two kinds of goop: the one part toothpaste-ish kind, like this stuff from Permatex, or the two-part mix-it-yourself kind that works like 5-min epoxy. J-B Weld is the most common brand for that stuff.

The sealant is very easy to use and works in almost any situation as long as the leak isn’t from a failed gasket. The downside is that it’s not a permanent fix. Usually, these sealants will last a year at most. The exhaust pipe is in a very extreme environment, and the hole will grow in size over time, making the plug fall out. 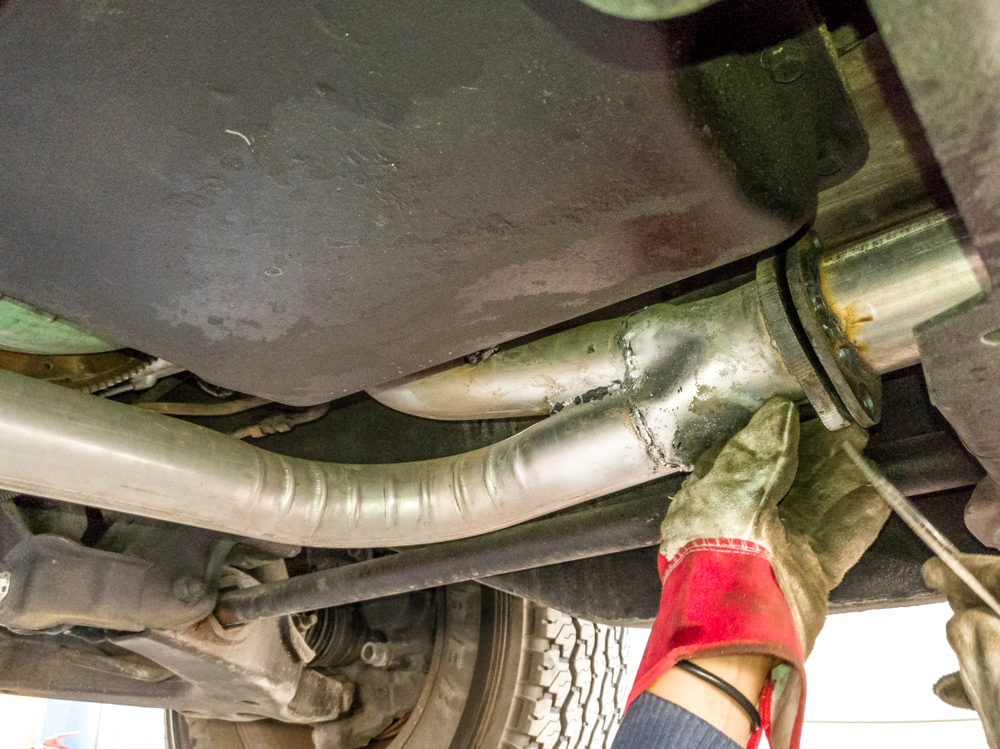 If you don’t have the resources or time to diagnose and fix an exhaust leak yourself, it’s perfectly reasonable to take it to a professional. The good news is that while most mechanics can repair the issue, you can save money by visiting a dedicated muffler shop. Shops that specialize in repairing and building exhaust systems will be able to get your car on the road faster and often charge less.

The cost to repair an exhaust system can vary wildly depending on many different factors. To help you out, here are three common scenarios and what they could cost. It’s important to note that your cost can differ depending on where you live and what kind of shop you visit.

Catalytic converter replacements are very common. They wear out over time, and unfortunately, they are often stolen. Compounding the misfortune is the fact that this is one of the most expensive procedures you may need.

The converter itself can cost upwards of $2000, and it may take a shop at least a few hours to cut out the old one and replace it. If you are lucky, a universal catalytic converter installation will run you about $500. If you are unlucky, you can expect to pay $3000.

Compared to replacing the catalytic converter, replacing the muffler is downright cheap. An inexpensive factory muffler can run between $50-200, and a good shop can do the job in an hour. That means your total cost will be between $150 and $300.

A good shop will usually charge $400 to $900 depending on the manifold’s complexity and location. You may want to find out what it would cost to simply replace the manifold before committing to the repair. You can often find common manifolds used at junkyards for less than $100. It’s worth it to see if the shop will simply swap the manifold after you buy one from another location.

Exhaust leaks are annoying at best and dangerous at their worst. We hope you can use this guide to free you from that issue and allow you to better enjoy your driving experience.