We often don’t think about the vapors inside our engines that don’t get burned, but if the pressure builds up too much, it can cause all sorts of unpleasantness. To prevent that, most motors employ a special device that releases the pressure. This PCV valve is a cheap, simple device that can get clogged and stop working, leading to the unpleasantness mentioned above.

In this article, we will tell you what you can do to solve the issues caused by a bad or dirty PCV valve. First, we’ll look at the symptoms of a bad valve. We’ll also go over what the PCV valve is, how it can be tested, and how you can replace it.

Symptoms of a Bad PCV Valve

A PCV valve has a lot to do with oil. Often the first sign that the PCV valve is having an issue will be that you notice you are low on oil. It’s a difficult symptom to catch unless you check your oil very regularly, though, so chances are you will notice one of the following symptoms instead.

Your Engine Is Burning Extra Oil

The oil level is dropping when a PCV valve fails because the PCV system is pulling oil out of your crankcase and injecting it into the cylinders. This can cause the following issues.

Your Engine Is Running Poorly

A PCV valve failure can cause your engine to run poorly. If it does, you’ll notice the following symptoms in addition or instead of the symptoms above.

What Is a PCV Valve?

When your car is running normally, the pistons inside the cylinders compress fuel and air, that fuel and air explode, and the piston gets forced down. Some of the explosion makes it’s way past the piston because piston rings never make a perfect seal. This expanding gas enters the crankcase below the pistons and adds positive pressure to the case.

This positive pressure can start pushing the oil around. If the pressure gets really high, it can actually push the oil through other seals and destroy gaskets. Worse, it can displace the oil and cause moving parts to fail. To prevent that, you need a way to vent the positive pressure.

PCV stands for positive crankcase ventilation, and it exists in order to vent the positive pressure so that you don’t get oil where you don’t want it. The PCV valve itself is just a check valve. It allows pressure to leave the engine but doesn’t allow anything to enter the engine.

On most modern vehicles, the pressure it relieves will have oil vapor in it, and we don’t want that oil vapor escaping into the air that we breathe. So the PCV valve is usually connected to the air intake, where it pushes that oil vapor back into the motor to be burned away.

How the PCV Can Fail

A valve can either be open or closed, so they either get stuck open or stuck closed when they fail. Most of the symptoms caused by a failing PCV valve are because the valve is stuck open.

When the valve is stuck open, though, it simply pulls constant pressure through the valve and can start sucking up oil into the intake. That oil will foul spark plugs, cause the engine to smoke, and ruin your mileage per gallon since burning oil is a pretty terrible way to generate power.

A PCV valve that is stuck closed won’t allow the positive pressure to vent. That means that every time a piston goes up and down, it’s adding pressure to the inside of your motor. If the pressure builds up to high, it will eventually find a way to escape. Imagine filling up a water balloon until it pops.

If you are lucky, the pressure will simply push the PCV valve out like popping a champagne cork. That’s messy but generally not a threat to the health of your engine. If you are unlucky, the head gaskets, valve cover gaskets, and breather tubes can all be the first to fail and squirt out the oil. You are likely already familiar with the horrors that a damaged head gasket can inflict.

How to Test a PCV Valve

The good news about a possible bad PCV valve is that it is perhaps the easiest component to test on the entire engine. First, they are supposed to be easy to replace. They are serviceable parts that are not meant to last forever, so engineers stick them in spots that are easy to get to. You can simply reach in and pull them out of the valve cover or manifold since friction is the only thing that holds them in place.

Second, the test itself couldn’t be easier. You shake the PCV valve and listen for a rattle. If there is no rattle, the valve is broken. Throw it away and replace it. People who want to be extra sure that the valve is bad can clean it off and blow in it. The air should make it through in one direction but not the other. If no air makes it through, or air makes it through in both directions, it’s definitely broken.

How to Replace a PCV Valve 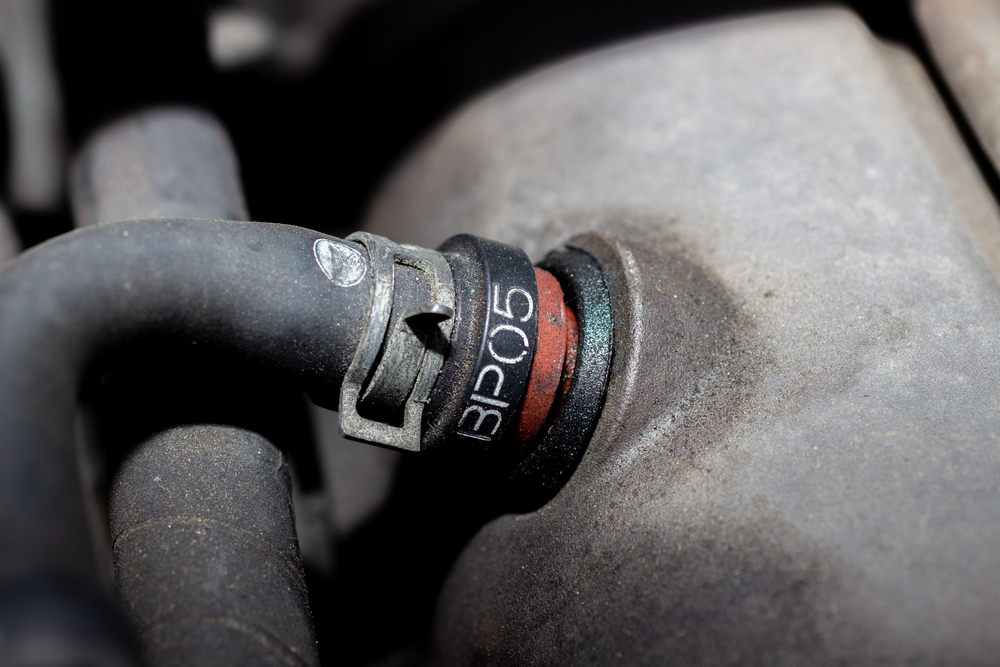 If it’s time to replace your PCV valve, there are two ways to go about it. The first is to have a mechanic do it. You could also do it yourself, which is what we recommend because it’s a very simple process and you will save money.

Since PCV valves are wear items, you don’t have to go to a mechanic if you want someone else to replace it. Most oil change shops are more than capable and will be more than happy to do it for a small fee if you get your oil changed. Expect them to charge an extra $50 for this service, which isn’t bad compared to the $70-120 that a mechanic’s shop would charge.

The one thing you must be aware of is that they want to sell you a new PCV valve. They make money by upselling services, so they may recommend changing your valve even if there’s no reason to. Check your manual for the service schedule; it will tell you when your manufacturer suggests replacing a valve for maintenance. If they tell you the valve is stuck and needs replacing, it’s well within your right to ask them to show you that it really is stuck.

You should replace the PCV valve at regular service intervals. That will prevent it from failing on you during normal operation, and it will keep your engine running clean. It’s also a procedure that anyone can do. In fact, it’s often one of the easiest services you can perform, even easier than changing modern air filters. Simply follow this list.

PCV valves are somewhat universal. A single PCV valve design can often fit many vehicles, so you can be fairly confident when buying an inexpensive one online that it will work for you. If you are using Amazon, simply use the garage feature to narrow down your options. You can expect to pay less than $50. Most valves are less than $20.

For example, this inexpensive valve will fit about 80% of all Cheverlots ever built. Modern Jeeps tend to have more expensive valves, like this one, but you can again notice that the same valve fits a ton of different vehicles.

If you don’t feel confident ordering online, simply take the old one into an auto parts store and have them find a match. It might cost a few dollars more, but you’ll know for sure that you got the right one.

Locate the PCV valve. It’s either on a valve cover or near the back of the intake manifold. It can be very helpful to google your make and model plus PCV location. There will be an image showing you exactly where it is.

You can also find it by simply locating the vacuum line from the air intake to the valve. Usually, it’s one of the bigger vacuum lines, and it is often connected directly to the intake.

Some PCV valves will have a vacuum line that is hose clamped on, and you will have to undo that clamp to slide the hose off. Usually, though, the hose is simply pressed on. Wiggling the hose back and forth while applying consistent pressure should be sufficient to separate it.

The hose can sometimes get stuck on old cars or cars that experienced a lot of heat. It is often easier to replace the hose and valve when that happens rather than cut the hose off and make it work. Vacuum hoses are sold by the foot, and the only thing you need to know is the internal diameter.

Most PCV valves are simply pressed in. To remove them, just twist them in place while gently pulling on them, and they should come free. Some manufacturers use bolts to hold the valve in place. You’ll have to remove those bolts before you can twist the valve out.

Be careful not to knock dirt or grime into the hole where the PCV valve goes. It will go directly into the engine oil and can clog small openings in the engine.

Push the new valve in, connect the hose, and you are ready to go. It’s that easy.

A PCV valve isn’t the only way to vent crankcase pressure. Old cars simply had a breather tube or a small filter that vented continuously. High-performance cars will sometimes have complicated catch can systems, like the one they talk about here in HotRod magazine, and some turbocharged cars will have multiple PCV valve-like contraptions.

If you work on car engines frequently or want to build higher performance engines, you will encounter these alternatives. They are rare, but if you own a project car with a failing PCV valve, you might want to use a different system.

The PCV valve is easy to overlook, but it’s vital to the operation of your engine. Plus, it keeps oil and other gunk out of the air so we can all breathe better. Hopefully, you found this article helpful, and you feel inspired to replace the PCV valve yourself. Or at least get it replaced before it fails and causes your whole car to smell like burned oil for a few weeks.