There are numerous components under the hood of your car, and when any of them stop functioning, you could end up with problems getting your vehicle from point A to point B.

One essential part that you’ll need to take care of is the serpentine belt. As its name suggests, this device is long, and it winds around the engine, attaching to numerous systems and helping them function.

When the serpentine belt is no longer working, things like your air conditioning, alternator, and water pump might stop functioning.

We’re going to take you through the symptoms of a bad serpentine belt and give you an idea of what it costs to replace it.

What Is a Serpentine Belt? 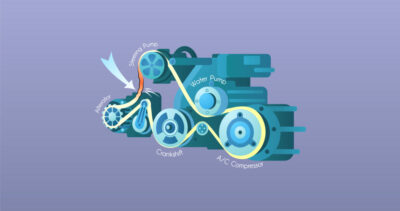 You’ll know it’s the serpentine belt you’re looking at when you see the ridges that run down the belt on one of its sides. These ridges have a specific purpose, as they ensure the belt can grip the pulleys present around the car’s engine. The serpentine belt, tensioner, and pulleys are responsible for powering many of the car’s components.

All of your car’s accessories require power. While the battery powers things like the radio, heater, and headlights, the battery has a finite amount of energy. Therefore, the vehicle has an alternator to recharge the battery when the car is running, and the serpentine belt is responsible for powering the alternator.

That’s not all, either, as the serpentine belt also provides power to the power steering pump, air conditioning system, and water pump. The belt wraps around several different components, so you could experience many different symptoms when you run into trouble with it.

Learning how the serpentine belt works could help as you diagnose and repair any problems you experience.

How a Serpentine Belt Works 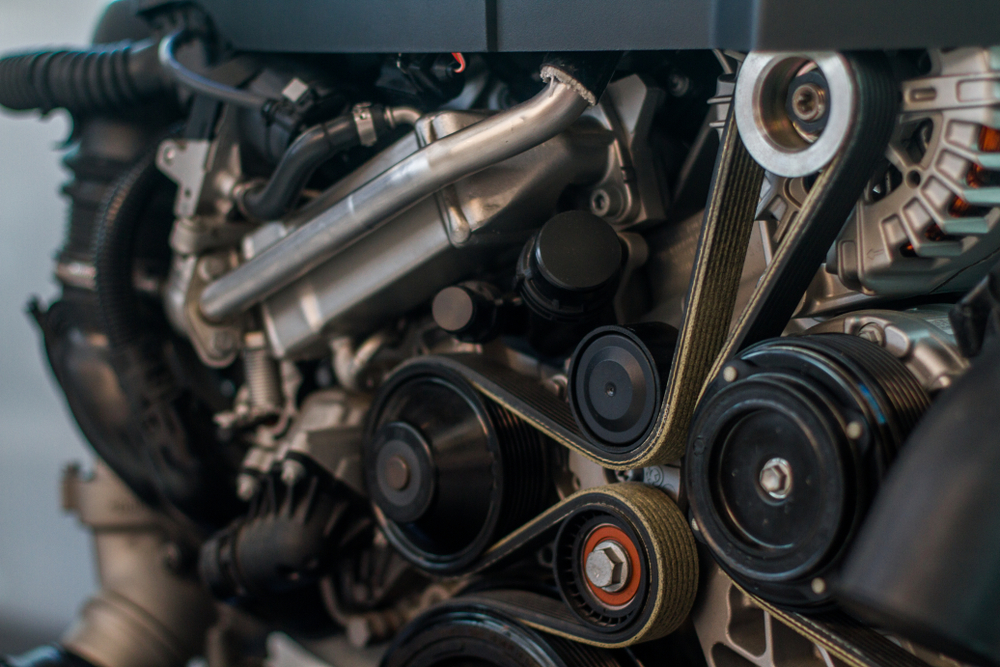 The serpentine belt is actually a simple device. The belt attaches to various connection points under your hood, and when the motor turns on and the crankshaft spins, the belt is activated and begins to move.

These connection points turn the serpentine belt into a pulley system. As the belt moves on the pulley system, it powers multiple components. This powering occurs because when the belt starts moving, these components move, too.

When the belt is damaged, it might not move the necessary components along the system, and they’ll stop working.

Therefore, a bad serpentine belt can cause many different problems for your car. Fortunately, you’ll likely experience a few symptoms that will give you a fair warning that it’s time to replace the belt.

6 Symptoms of a Bad Serpentine Belt 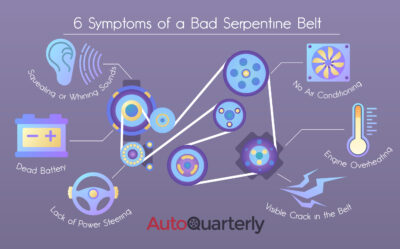 A bad serpentine belt is a significant problem for your car because this part helps so many different vehicle components function. In a worst-case scenario, your car won’t even start without a serpentine belt to power the alternator. Luckily, it will become quite evident when your belt is experiencing difficulties because there will be some noticeable symptoms.

One of the first symptoms of a bad serpentine belt you’ll experience is a squealing sound when you turn your car on. When this happens, you’ll turn the key and a loud, high-pitched noise will let you know something is wrong. This noise, which will come from under your vehicle’s hood, will sometimes go away after a few minutes –in the early stages of damage to the serpentine belt.

When you experience this noise when starting your car, there’s a good chance your belt is damaged and requires replacement. It could also signal that the belt needs realignment or the tension adjusted.

Another sound that could mean you have an issue with your serpentine belt is whining coming from the area around your engine. This noise is a sign that your belt is too tight, so you’ll want to check on its tension. Failing to adjust the tension on your serpentine belt could lead to additional problems like bearing failures.

Imagine you’re heading out on one of the hottest days of the year, and when you turn your car on, there’s no air conditioning. In this scenario, your serpentine belt could be the issue.

When the serpentine belt is responsible for a failed air conditioner, you’ll notice that the cooling system isn’t functioning at all. The air conditioning won’t turn on and won’t even make a noise.

Keep in mind that other underlying causes can affect your air conditioning, but the serpentine belt is one of the most common.

As a result, you could run into issues with your steering when your serpentine belt is no longer working.

While it’s possible to drive your vehicle without power steering, it gets far more challenging when this occurs because your steering wheel won’t turn as smoothly.

4) Visible Crack in the Belt

In some cases, you won’t notice any performance problems at all, but that doesn’t necessarily mean that your serpentine belt is in perfect condition. As it ages, the belt will begin to wear, eventually developing cracks.

When the belt gets to this stage, it’s only a matter of time before you run into some issues. Therefore, it’s a good idea to periodically inspect this component and replace your serpentine belt every 100,000 miles or so.

Many underlying issues can cause a dead battery, but a broken serpentine belt is a common one. The reason is that your serpentine belt helps your vehicle’s alternator charge the battery as you drive.

Without the alternator charging the battery, it would die pretty quickly. Think about times you’ve left an interior light on in your car, and you’ll realize that batteries on their own don’t hold a charge for very long. If your serpentine belt breaks and your alternator can’t recharge the battery, it could leave you stranded wherever you are until you complete the repair.

Remember that the serpentine belt doesn’t have to break for you to find yourself in this predicament, as even a loose belt could fail to grip the alternator pulley, leading to problems.

Your serpentine belt is responsible for keeping your water pump functional, so it stands to reason that when it breaks, your engine could overheat.

The water pump helps regulate the temperature of your engine. When it’s unable to do its job, the engine will swiftly move into the red zone on your dashboard temperature gauge and stop working. You could even do permanent engine damage if you don’t address this issue quickly.

As soon as you realize there’s a problem with your serpentine belt, it’s in your best interests to begin the repair process as quickly as possible. That way, you don’t find yourself stranded at an inopportune time with a vehicle that won’t start or is challenging to steer.

How Much It Costs to Replace a Serpentine Belt

The good news is that although your serpentine belt is responsible for many different jobs, it isn’t an expensive part to replace.

There are a few different things to consider when replacing your serpentine belt that will influence the project’s cost. The belt itself is an inexpensive part that will probably cost you around $25 to buy. After all, it’s just a piece of rubber that you’ll attach to some pulleys around your engine.

However, there is a chance the pulleys and tensioners could wear down, too, at which point you’ll have to replace all of them. There are kits available that will cost between $50 and $150, depending on the make and model of your vehicle. These kits include everything required for the installation and usually come with a belt routing diagram to assist with the repair.

There should be a belt routing diagram in your owner’s manual, which will assist as you attempt to install your new serpentine belt.

You could also opt to take your vehicle to the shop to complete the job, which is a good idea if you don’t have much experience with automotive repair. How much you’ll pay depends on your mechanic’s hourly rate. You can expect the repair to cost you somewhere in the $150 range for the belt or a bit more if the pulleys and tensioners require replacement.

You’ll want to check your serpentine belt every 50,000 miles, and it’s a good idea to replace it every 90,000 to 100,000 miles regardless of what kind of shape it’s in so it doesn’t give out on you at an inopportune time.

Replacing the Serpentine Belt Yourself 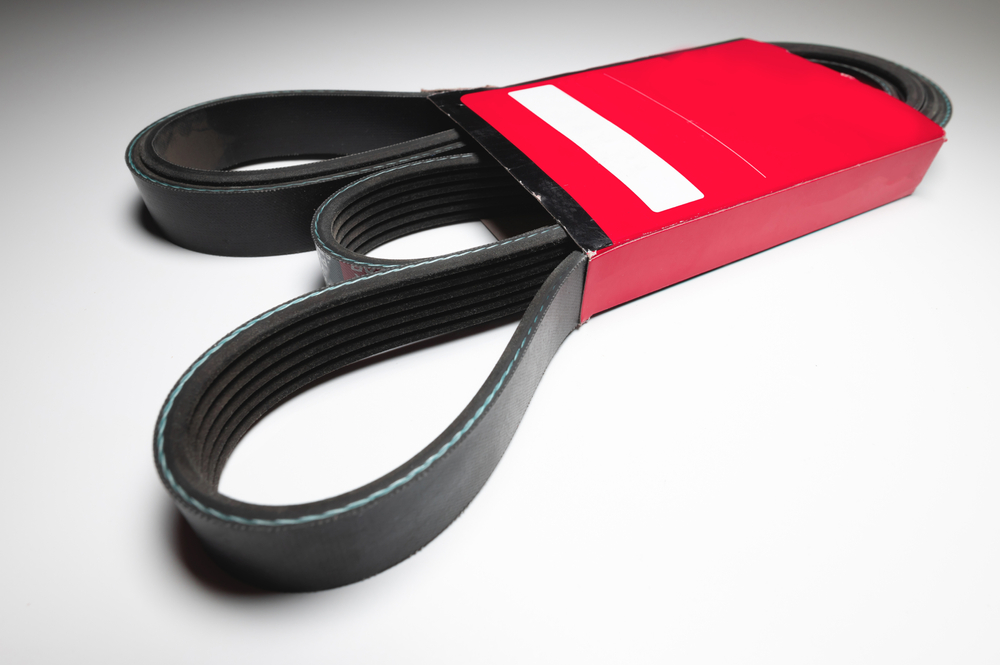 If you want to replace your serpentine belt yourself, you’ll need a few tools like a socket, a rachet, and an Allen key. You can also use a serpentine belt tensioning tool, although it often isn’t necessary. Some manufacturers recommend using a specialized tool on the lock pin that you’ll have to purchase directly from the car company.

Before you begin, take note of belt routing. It’s a good idea to snap pictures to ensure you have this information available to you later on. Your manual should have some diagrams, too, but photos provide a more detailed look at how to replace your serpentine belt.

To remove the existing serpentine belt, you’ll have to find the serpentine belt tensioner. You’ll find its location in your owner’s manual, but it’s usually on the top side of the car near the alternator. To take tension off the belt, you’ll put the Allen key in the lock pin and turn the tensioner with the rachet and socket. It doesn’t take much to remove the tension, at which point the entire belt will pull right out.

At this point, it’s a good idea to inspect the rollers that are part of the pulley system for damage. If you notice damage, it’s time to replace these rollers.

From there, you’ll route the new belt where the old one was located and use the rachet to re-tension the serpentine belt. Do a visual inspection before finishing the job to ensure that the belt’s ribs are lined up with the pulley’s ribs. Having even one rib off could leave you with a destroyed serpentine belt to replace.

Replacing a serpentine belt is a relatively straightforward process, although it will take some time if you haven’t done it before.

Your serpentine belt is an essential vehicle component. Despite its simplicity, the device delivers power to many of your car’s accessories, and there’s even a chance your vehicle won’t start at all if you don’t have the belt in working order.

The serpentine belt is also an inexpensive part that you can either replace on your own or take to a mechanic for an easy fix. It’s a good idea to keep a close eye on your serpentine belt and replace it every 100,000 miles to prevent some of the more severe symptoms on this list from becoming problems for you.