The water pump. Not exactly an interesting part of a car, but critical nonetheless. If your engine is overheating or there’s steam coming from your car’s hood, your water pump could be faulty.

Water pumps aren’t given a second thought because they usually just work. That said, they can go bad for several reasons. You’ll soon know about it if your water pump is faulty. Don’t ignore the problem, as it can result in severe engine damage if left unfixed.

This article explores everything you need to know about water pumps, including what they are and how they work. We’ll also look at the common symptoms of a bad water pump and explain how much they cost to replace.

What Is a Water Pump?

If the name hasn’t given it away, a water pump’s job is to pump water around your car’s engine. It does this to keep the engine operating correctly, regardless of the weather or driving conditions.

Water pumps are found in any water-cooled vehicle, from motorcycles to trucks and everything in between. While it is a crucial component, a water pump is just one piece of the puzzle when it comes to an engine’s cooling system.

The water pump is located in the engine bay, and it’s usually nestled between other components, meaning it’s often hidden from view.

How Does a Water Pump Work?

The pump connects to the engine’s crankshaft via a pulley. As the engine runs, the pulley moves, causing the pump’s internal parts to spin. This spinning creates a centrifugal force, pushing the coolant through the hoses and into the engine block.

The heat from the engine is transferred to the coolant, which is then pumped to the radiator. The radiator’s fins allow the coolant to dissipate heat via the ambient air hitting the car while driving. The coolant then makes its way back to the water pump, where it’s recirculated once again.

What Causes a Water Pump to Fail?

It’s quite common for water pumps to fail with age, much like any other engine component. One of the most common causes of water pump failure is worn seals, which causes the pump to leak coolant.

The pump’s internal bearings can also become worn with age or damaged, stopping the pump from spinning and pushing the coolant into the engine. A common cause of bearing damage is when the belt overloads the bearings. Additionally, a bent pulley or excessive vibrations can cause the pump’s shaft to crack or break.

Corrosion can also cause premature failure of a water pump. Corrosion occurs when the wrong type of coolant, or old coolant, is used in the cooling system. Rust and dirt build up, which clogs the pump and stops it from working.

As you can see, there are many reasons why a water pump can fail. Most of the time, it’s due to a critical part of the pump failing because it’s old or worn.

Can I Still Drive With a Bad Water Pump?

You can drive a car with a faulty water pump, but it doesn’t that mean you should. You may be able to continue driving without any issues if the pump isn’t too bad (for example, if it has a minor leak). However, if the problem is more serious, like worn bearings, you won’t be driving far.

Driving a car with a cooling system defect can seriously damage the engine. It doesn’t take long for the engine to overheat, which can cause serious damage like a blown head gasket or a warped cylinder head. These problems are way more expensive to fix than replacing a bad water pump.

If you suspect that your water pump is failing or notice any of the symptoms listed below, play it safe and don’t drive your car. If you need to move it, get it towed. It isn’t worth the risk of damaging the engine further.

If your engine is overheating, the water pump might be dead. You’ll know if it’s overheating by looking at the temperature gauge — anything over the midpoint is not good. You should stop driving if it’s in the red, as that’s where engine damage can occur. Some vehicles will also show a temperature warning light on the dashboard — another sign that you should stop driving.

High engine temperatures can be caused by other cooling system issues, such as low coolant or a head gasket leak. Regardless, overheating is a serious problem, and you should investigate the cause before it gets even worse. 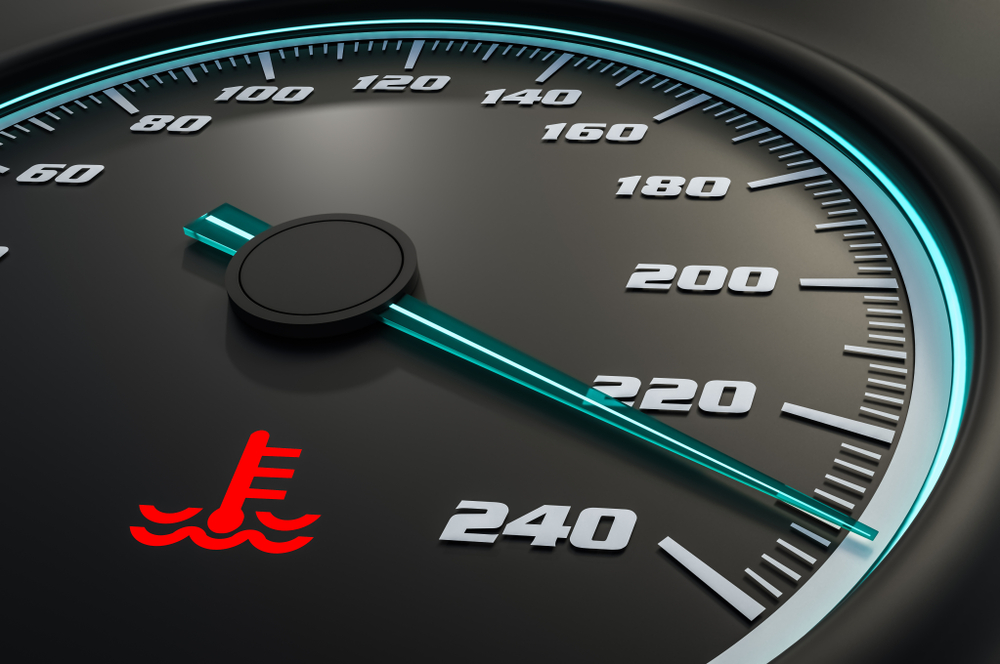 You may see coolant leaks under your car when the water pump goes bad. As we’ve learned, the pump’s seals can leak, which causes the coolant to leak from the pump. Unless you look under your car, you may not even notice it’s leaking.

You may also find coolant leaking in the engine bay, although this is less common. Depending on the type of coolant you have used, it may be green or orange in color. Places you may find coolant leaks include around the coolant hoses and on other components located near the water pump.

If you don’t fancy climbing under your car, you can take a look at the coolant level by inspecting the coolant fluid reservoir. A low coolant level (under the minimum mark) means there’s a leak. The leak might not necessarily be from the pump, though; the coolant could be leaking from elsewhere, so just bear that in mind.

Steam From the Radiator

Any smoke or steam coming from your car isn’t a good sign, especially when it’s from the radiator, as radiator steam indicates overheating. Hot coolant usually passes through the radiator where it’s cooled down — if it’s steaming, the cooling process isn’t taking place.

A bad water pump can stop the coolant from circulating, resulting in hot coolant sitting in the hoses and the radiator. This manifests itself as steam. If you notice any steam, pull over immediately as continuing to drive your car can cause irreversible engine damage.

A word of warning: never open the radiator cap while the engine is hot. The cooling system is not only scorching hot, but it’s also highly pressurized. Opening the cap can result in boiling fluid shooting out. Needless to say, this can cause serious harm and injury to you. Always allow your car to cool down before touching any part of the engine. 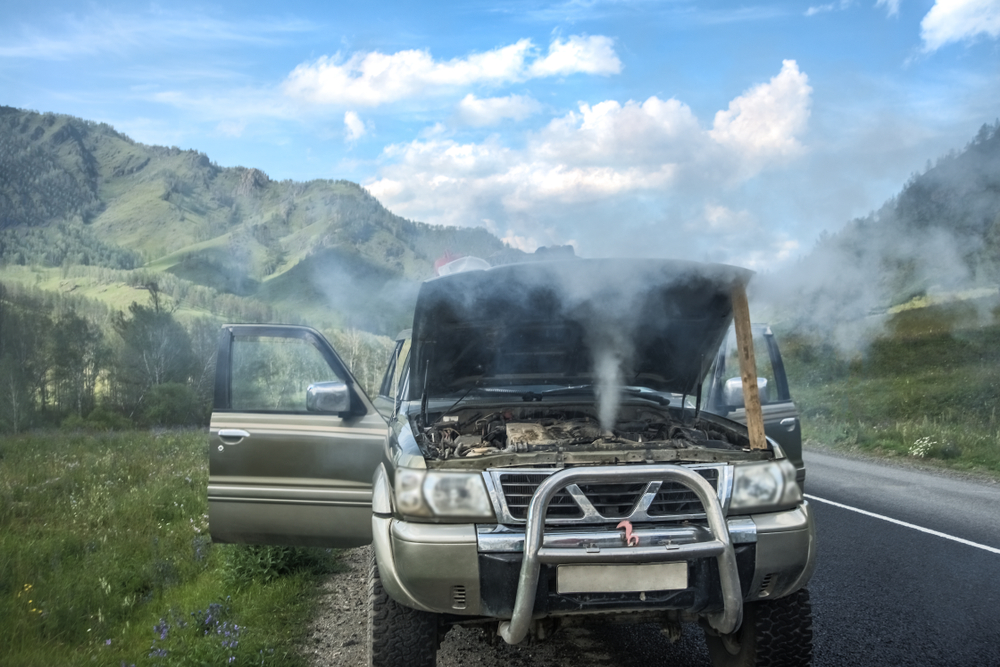 Mechanical damage to the water pump often causes weird whining or crunching noises. In some cases, you may hear a knocking coming from the water pump. It may be difficult to hear these noises while the engine is running, especially if you have a diesel car, meaning they often go undetected.

Open the hood and let your engine idle. Stand by the front of your car and listen for any noises. You’ll have a better chance of hearing any unusual noises coming from the water pump this way. That said, it can be difficult to isolate where the noise is coming from, especially as the water pump is typically buried under other components.

Your water pump is bad, and it needs replacing. How much will it cost?

In short, the average cost of replacing a water pump at a garage is $500. However, it can cost anywhere from $150 all the way up to $800, depending on the model of your vehicle. This price includes the cost of parts and labor at a garage.

To demonstrate the difference in cost between vehicle makes, here are some real-world prices. A water pump replacement for a 2014 Volkswagen Golf is $375. The same job on a 2008 Audi S4 costs more than twice that, at $775. For higher-end vehicles, or brands notorious for high costs (cough, BMW), the price can be significantly more.

You could carry out the job yourself if you’re confident enough. While a water pump replacement isn’t a super complex job, you will need to have some mechanical knowledge to carry it out. Doing it yourself can save you a lot of money; a new water pump costs between $50 and $400.

We’d always recommend buying a genuine water pump. While aftermarket pumps are cheaper, they may fail earlier than a genuine part, which will cost you more time and money in the long run. You’ll also need to factor in the costs of extra coolant and new seals, although they are pretty inexpensive compared to the pump itself.

Bear in mind the cost may be significantly higher if additional work needs to be carried out. You’ll pay more if your thermostat or belt needs replacing, so be sure to factor that in.

How Long Should a Water Pump Last?

On average, a water pump should last for 60,000 to 80,000 miles. However, this number will vary greatly depending on the vehicle model and how well it’s maintained.

It makes sense to replace the timing belt when replacing the water pump as they both last for around the same amount of time. Plus, you often have to take the timing cover off to access the pump. You can save some money in the long run by changing them together, rather than separately at different times, as much of the labor is the same.

To Sum It Up

Your car’s water pump is a vital component that can cause significant issues with engine cooling when it goes bad. It’s important to sort out any water pump or wider cooling system issues quickly. If left unchecked, your engine can sustain serious damage, which will cost a lot more to fix.

Diagnosing a faulty water pump is relatively straightforward, but be aware that the fault might be caused by another issue with the cooling system. You can carry out the diagnostics and replace the pump yourself if you’re mechanically inclined. If not, it’s best to let a qualified mechanic do the work as they’ll have lots of experience in this area, and they may spot additional problems that need to be fixed.