Home › Knowledge Base › Car Jerks When Accelerating: A Quick Guide on How to Fix Them

It always happens when you least expect it. You’re driving around in a rush, put your foot down to accelerate, and all of a sudden, the car jerks. You tell yourself that maybe it’s a stray occurrence. But it soon begins to happen more often. You finally realize that you’re dealing with something that won’t go away, no matter how much angry muttering you do about it.

If that sounds familiar, you are, unfortunately, dealing with an issue that might take some work to fix. But not to fear, the solutions are easy to access, and most auto shops around you will know what to do about it. We’re putting this piece together so you know what the symptoms look like and how to go about ensuring you deal with them the right way.

How to Spot Issues With a Car’s Acceleration

If you’ve never had a car act up when you’ve pressed down on the accelerator, then that first stutter is going to catch you off guard. You might even wonder if you hit a tiny bump in the road.

A car that jerks in response to acceleration will feel like it isn’t getting enough power to do what it needs to. You’re going to push down on the pedal and expect the vehicle to take off like it usually does. But instead of zipping away, your car might hesitate initially, then hop forward when you don’t expect it to, and then move forward slowly before picking up pace. If you let the problem linger long enough, your car might even lurch to a complete halt after the aforementioned routine. If you do manage to get it out of the blocks, then it will often jerk, making it hard to maintain speed.

It is for these reasons that it’s important to spot the issue and address it before things get too bad. Eventually, the problem will become hard to ignore.

These issues aren’t just a wrench in your driving experience. This is also a safety issue that you will want to address quickly. A car that doesn’t respond to acceleration like you’d want it to can be a hazard in traffic. A sudden jerk forward can send you into the bumper in front, and halting all of a sudden could put you in the way of whatever is behind.

It goes without saying that if you see your car show any of these signs, it’s time to take it to a mechanic. But first, it can be helpful to take a look at the vehicle yourself and figure out the source of the issue. If you’re handy, you may even want to take a stab at fixing it. Either way, understanding the causes means you’ll know what’s going on with your vehicle, and once you do, you can ensure that your mechanic is on the right track.

So, with that said, let’s take a look at what’s going on under the hood.

10 Reasons Your Car Jerks When Accelerating

Here are the top reasons that cars have adverse reactions to acceleration. We also look at what’s going on in individual parts of the car and some of the ways you can set things right again.

Dirt clogging up your fuel injector can lead to a variety of issues. One of them is poor acceleration. It’s a common problem and one that leads to the engine misfiring often. This manifests itself as a car that seems to be leaking power when you press down on the accelerator or stops completely when you aren’t ready for it.

Thankfully, dealing with a dirty fuel injector is often something you can do on your own. We’ve created a comprehensive guide on how to use a fuel injector cleaner to clean the part regularly.

If you’ve let your fuel injectors go a very long time without cleaning, then they may be beyond redemption. If they don’t work after you’ve used the cleaner, then first try taking the part out and cleaning it manually. If that doesn’t work, then it may be time for a visit to the mechanic and new fuel injectors. 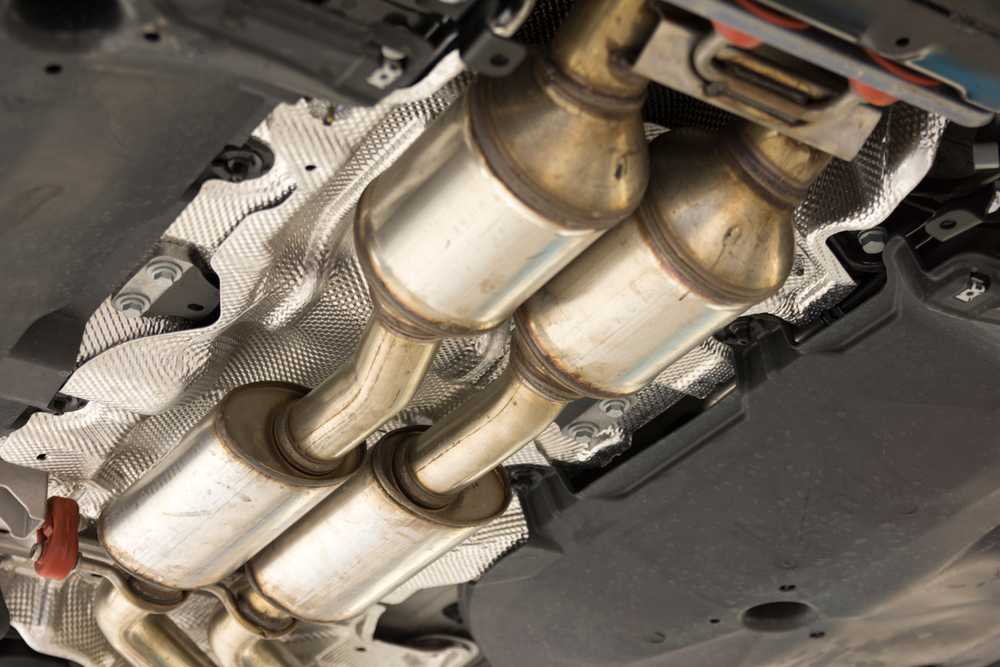 The catalytic converter is the part of the car that keeps it as safe for the environment as possible. It uses a series of chemical reactions to reduce the pollutants that your vehicle emits. Over time, the catalytic converter can develop blocks due to impurities building up and cause reduced airflow through the exhaust system.

A clogged catalytic converter will present itself as a jerky car at some point. Usually, there are also other noticeable issues caused by the same basic problem. You might start to smell hydrogen sulfide coming out of your car (the classic rotten egg fragrance) or see a sudden drop in fuel efficiency.

The best way to prevent these issues is to get a high-quality catalytic converter. We’ve made a list of them here so you can make your pick easily. If you do realize your catalytic converter is leading to your car being jerky, then you’ll need to take it down to the shop and get it cleaned.

Sometimes when a car stutters when you accelerate, it’s telling you that it isn’t getting enough fuel running through its veins. The part of the car responsible for doing that is the fuel transfer pump. If it isn’t firing the way it should, then your car won’t have the juice it needs to accelerate.

A fuel pump gone bad is one that needs to be replaced immediately. Your mechanic will usually make recommendations when you take your car in. You can prepare yourself for that conversation using our list of the best fuel transfer pumps in 2023.

But you might not always have to replace the fuel transfer pump. The issue could have arisen from a block in the fuel filter. In that case, you can save money by replacing the fuel filter instead of the pump itself.

This particular problem shows itself when your car is moving at higher speeds. If that’s when you tend to see your vehicle stutter or surge forward, then the problem may lie in the mass airflow sensor. This sensor sits in your car, checking how much air is coming through the engine so that the fuel injectors can pour in the right amount of fuel.

When the mass airflow sensor is down, the car stops creating the air/fuel mixture in the right ratio. And so you end up with a car that jerks when you accelerate. You can diagnose the issue using an OBD2 scanner, the best of which we’ve listed here.

The mass airflow sensor tells the car’s computer how much air is coming through. The part responsible for actually channeling that air through is the air filter.

The air filter is the part of your car that keeps foreign particles and dirt out and sends clean air to the engine. Because of the nature of its job, air filters can get dirty easily. This will mean a combustion chamber that’s starved for air and lead to stuttering responses from your car.

The best way to prevent this issue is by replacing your air filter often. They can cost as little as $10 (here’s our list of the best ones). You could also consider a reusable air filter so you can clean the part without having to replace it.

A bad air filter is not the only part that can lead to issues with the fuel/air mixture in the engine of a car. In fact, the carburetor is the component that is tasked with getting the balance of air and fuel in the engine just right.

A dysfunctional carburetor will often lead to stuttering when you hit the accelerator on your car. There are a few checks you can make to ensure it’s working properly. That includes looking at the main mastering system of the engine and checking the idle system.

If either you or a mechanic spot any issues with the carburetor, then you can rest assured that your car’s jerking will be put to rest by the replacement.

We’ve moved forward in the transmission chain and reached the spark plugs. It’s these plugs that create the spark needed to ignite the fuel in the engine chambers. If the spark plugs don’t work as they should, you, once again, get an engine that misfires frequently.

Your car’s distributor cap is an important component in the internal combustion process. There are many symptoms of a faulty distributor cap. You may get an engine that’s noisier than usual, see the check engine light is activated, or notice your car jerks on acceleration.

Moisture tends to build up right under the distributor cap. This usually comes about on cold days when condensation forms. The issues with the engine will usually go away once the moisture has cleared. But if this problem persists, it can take a toll on the engine.

The best way to prevent this issue is by parking your car in your garage instead of out in the open, especially on colder days. This will prevent condensation and keep moisture at bay.

Not all of the issues that lead to a car that jerks on acceleration originate deep in the underbelly of your car. Sometimes, the problem is right outside where your accelerator sits.

A lot of new cars use electronic throttle control these days, but many still have accelerator cables. These cables connect the throttle to the gas pedal. They tend to undergo wear and tear over time. Eventually, a worn-out accelerator cable will get in the way of smooth acceleration.

This is a serious issue and needs to be dealt with immediately. Visit a mechanic you trust to replace your accelerator cable so you can ensure that the replacement has been done correctly.

This one only applies to those who drive automatic cars. These vehicles don’t use mechanical systems to transmit power; rather, they rely on the transmission control module to get the job done.

A faulty transmission control module will lead to issues that look a lot like the mechanical failure we saw with the accelerator cables in the last point. You’ll notice that your car doesn’t respond to gear shifts on time or that it responds to them in an unpredictable manner.

It is never fun to have your car stutter, judder, and grind to a halt when you hit the accelerator. But as we’ve seen, there’s a relatively small list of offenders at play and a lot you can do to set things right.

If you don’t have too much experience with cars, don’t try to replace any of these parts yourself. But it is worth learning about what causes your car to jerk when you accelerate. The different causes we’ve delineated in this article are a good starting point, and you can use it as a guide to inform your dealings with your mechanic.