It should be fairly safe to assume that most people’s only experiences of hotwiring a car come straight off the TV. We all know that Hollywood has a habit of making things seem much simpler than they really are. But most of us have no clue about what’s actually involved in the process of getting a car running and ready to be driven when you don’t have the key for it.

So, we sat down to learn everything we could about hotwiring (or hot-wiring) in order to demystify the whole process. And now we’re ready to clear up some myths, give you the facts, and help you truly understand everything that goes into hotwiring a vehicle.

The information in this article will illustrate how difficult the process of stealing a car really is, to help assuage some fears. It will also detail the process of hotwiring a car for owners who have lost their keys or whose vehicle has a malfunctioning or damaged ignition.

But before we get ahead of ourselves, let’s go over the basics so everyone is on the same page.

In practical terms, hotwiring is considered any method of starting a vehicle’s engine without the use of its key. As such, the goal of hotwiring a car is getting the engine running in a way that doesn’t involve the key. This means that the more you know about how cars work (and, more specifically, how they start), the more options you’ll have to bypass the car’s intended starting method.

The reason why it’s called “hot-wiring” is that one of the most common methods for starting a car without the keys is by accessing the wires that connect to the ignition switch, cutting and stripping them, and then using the “hot wire” (the starter wire or wires) to get the starter motor running, which turns on the engine of the car.

The term “hot wire” is electrician terminology. Hot wires, or live wires, are wires that carry the electrical current from the power source. These wires are called “hot” or “live” because they have an active current running through them that makes them dangerous when the wires are exposed (i.e., when the actual metal wires are exposed to the air and not concealed inside their insulation material).

Due to this, hotwiring a car can be a fairly dangerous undertaking. Exposed live wires can cause electrical shock and start fires, presenting a serious safety hazard. If you intend to attempt hotwiring your vehicle or fiddling around with wires at all, we recommend getting some electrical insulating gloves to help keep you from shocking yourself.

Now that we have all that out of the way, let’s dive into how hotwiring is actually done.

How to Hotwire a Car 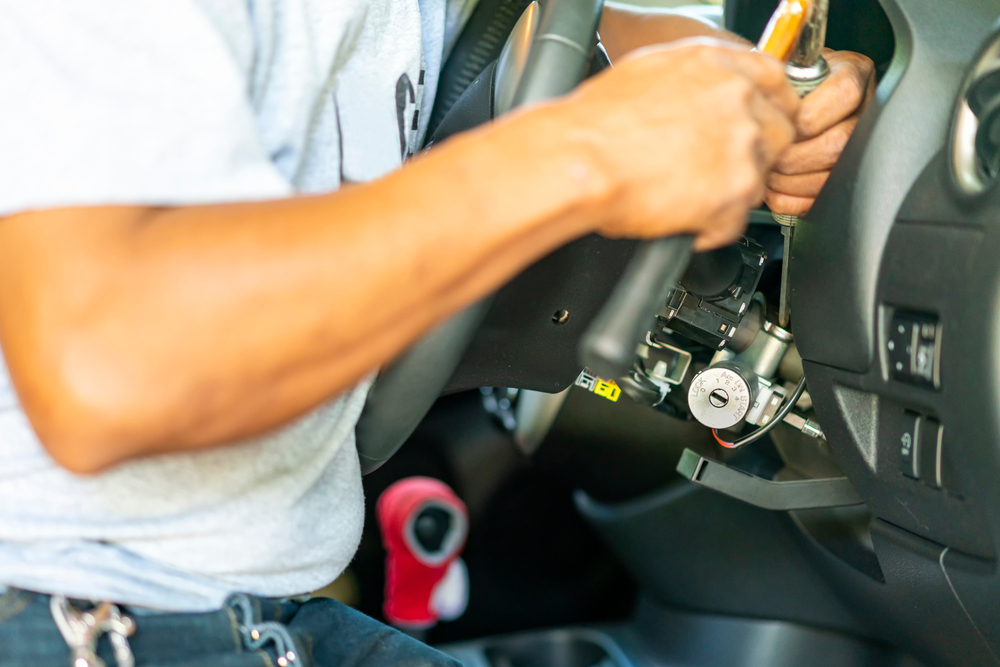 As we mentioned above, “hotwiring” a car can be done with a variety of methods. Which method to use will depend on the circumstances at hand and the car itself. Realistically, any car from the mid-’90s or newer can’t be hotwired without very specific knowledge of the particular make and model of the car, as well as its anti-theft systems. We’ll go more into this later, but this fact is a major contributor to the precipitous decline of car thefts in the United States in the past 30 years or so.

Here are some of the most common methods for hotwiring cars from the early ‘90s and before:

If that doesn’t work, some force and the help of a hammer can do the trick. Older cars with keyed ignitions that aren’t so worn out they turn with a screwdriver can be coerced into turning by jamming a flathead screwdriver into the ignition slot and then forcefully hammering the screwdriver into the ignition lock cylinder. Doing this properly will destroy the lock and make it so you (or anyone else) can use a flathead to start and shut off the car with ease.

There are a lot of variations of this method of hotwiring a car. For instance, a “bump” or “jiggle” key (a crude lockpicking device) can be employed, as you can see in this video.

Newer cars can require different methods, and a much deeper understanding of how the ignition system works to get the engine running through the use of the ignition lock cylinder. Older cars can also be started using traditional lockpicking methods, if they use tumbler locks.

Now we get into the hotwiring methods that actually deserve to be called “hotwiring.” Here are the steps to hotwire a car, but remember that this will only work on old cars from before the mid-’90s:

Generally, removing a couple of screws and applying some elbow grease will be all you need to get the covers off the steering wheel column.

Once you’ve removed the steering wheel cover, you’ll need to reference your owner’s manual again to find and identify the wires you need. There will be a few different bundles of wires that connect to various instruments and dash controls, but you’re looking for the starter wire bundle. It should have 3-4 wires.

Typically, this is how the wires are colored: the red wire leads to the battery, the yellow wire is for the ignition, and one or two brown wires are the actual starter wires.

Now that you’ve found and identified each wire, pull out your wire cutters and get to snipping. First, you’ll want to cut, strip, and then twist together the exposed ends of the battery wire and the ignition wire. If you didn’t electrocute yourself, and your car’s radio “beep booped” at you as it turned on, then congratulations…You now only have the most dangerous part to go.

Carefully cut and strip the starter wire(s) and then tap their exposed ends to your twisted together ends of your battery and ignition wires. You are likely to see sparks fly and the engine should come to life at this point.

If you have managed everything up to this point without shocking yourself or starting a fire, bask in the glow of success for a brief moment before realizing that the steering wheel won’t budge.

There are also hotwiring methods that can be performed under the hood of your car with the help of jumper cables. Once again, these methods only work on older cars and different makes and models will have individual components you’ll have to find using the owner’s manual or your years of experience under the hood.

Why Hotwiring Is Even Harder Than It Seems 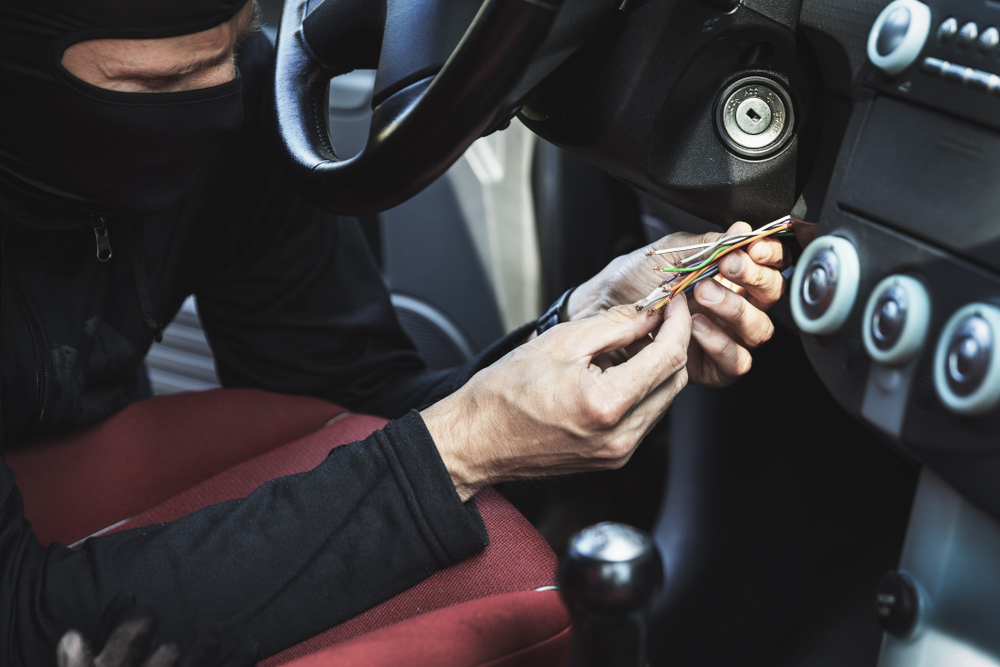 You may have noticed that we mentioned that these methods were all related to getting the engine running, which may seem like all you need to do to take off with a car. However, as this video shows briefly, most cars have anti-theft systems that make turning the engine on only the first step to driving it without the key. Most vehicles have steering wheel locks that will prevent you from being able to turn the wheel even if you have the engine running.

New cars make things even more difficult thanks to their computer systems and keyless ignitions. Hotwiring new cars is practically impossible due to their advanced anti-theft systems that all but require their remote “keyless” key to start.

Today, radio devices are used by thieves to relay the signal from your key fob to wherever your car is so they can get in and start the car without setting off any alarms or even damaging the vehicle.

It’s almost sad to say, but hotwiring is nearly a thing of the past that mostly lives on in Hollywood’s make-believe version of our world. For all practical purposes, hotwiring today is really only performed by car mechanics as a means for diagnosing starter issues or getting a vehicle to the shop. While older cars made prior to the ‘90s can still be fairly easily hotwired without a ton of expertise or special tools, this really isn’t the case for cars made in the past couple of decades.