Engine performance issues are never fun. When you accelerate onto the freeway or launch at a green light, you want every ounce of power that your motor can provide. If your MAF sensor is failing, though, you won’t be getting that power. Instead, you’ll get irritating noises and terrible gas mileage. That’s no good.

In this article, we will be talking about the mass airflow, or MAF, sensor. The MAF sensor is located directly behind the air filter, and they come in a variety of shapes and sizes. As the name suggests, they measure airflow for the computer. To start, we’ll talk about the symptoms that occur when one goes bad. Then talk about how these sensors work and cap it all off with common solutions.

Symptoms of a Bad MAF Sensor

When a MAF sensor fails, it will cause the car to use an incorrect amount of fuel. Therefore, all the symptoms are related to rich or lean conditions and often directly affect performance. To start, it’s best to define some terms to make it easier to understand what might be happening.

The symptoms caused by a bad or dirty air sensor are the same symptoms that will occur anytime the computer can’t accurately calculate the fuel ratio. That can make it difficult to narrow down the problem to just the MAF. However, replacing the MAF or MAP sensor is inexpensive and simple, so it’s the perfect place to start.

The check engine light comes on when the computer detects a fault. You can scan the computer with an OBD2 scan tool like the ones we recommend here, and it will tell you if the engine is running rich or lean.

If the check engine light begins flashing, it means you need to pull over and stop driving. Severe misfires caused by sensor issues can cause permanent engine damage, and the flashing check light will be your biggest indicator that misfires are occurring.

When you first start a car with a bad airflow sensor, you may notice that the idle surges or sounds inconsistent. That inconsistency will continue as you drive the car. It may be difficult to reach highway speeds, or the engine may lurch and hesitate when you leave from a stop.

Engines that are running either too rich or lean are not running efficiently. The direct result of that is a much lower fuel economy. If you notice that you are getting a lower mileage per gallon, it may be a sign that the MAF is failing or dirty.

Pinging is one of the most common symptoms of a bad MAF sensor. The fouled sensor will cause the engine to run leaner than it wants to, which will make the cylinder temperature higher. The higher temperature will cause some of the fuel and air mixture to explode prematurely and that causes the ping you hear.

The Car Takes Longer Than Usual to Start

A cold engine requires more fuel to start than an engine that is warmed up. A bad sensor may be telling the computer that there isn’t enough air, so it won’t send the extra fuel to the chamber. That will make your car much harder to start.

What Is a MAF Sensor?

The mass airflow sensor, or is a small sensor that measures the amount of air being sucked into the intake. They often look like long plastic boxes with holes in them to allow the airflow through. Some cars have dedicated housings that fit into the air intake right before the throttle body. If you look into the plastic parts or housings, you will see one or more of the copper wires that do the actual sensing.

ECMs go by a lot of names. The most common is simply “the computer,” and often gets abbreviated ECU or PCM depending on the manufacturer. Technically, a PCM includes more than just an ECU, but they function the same for the purpose of this article. It stands for engine control module (engine control unit, powertrain control module) and what it does is calculate things. Things like when the spark plugs should fire and how much fuel should be added.

Modern cars rely heavily on the computer to make most of the decisions that happen under the hood, and computers rely heavily on sensors. In order to calculate how much fuel to add, for instance, the computer needs to be able to measure the amount of air going into the motor. That way, it can maintain the correct fuel to air ratio. 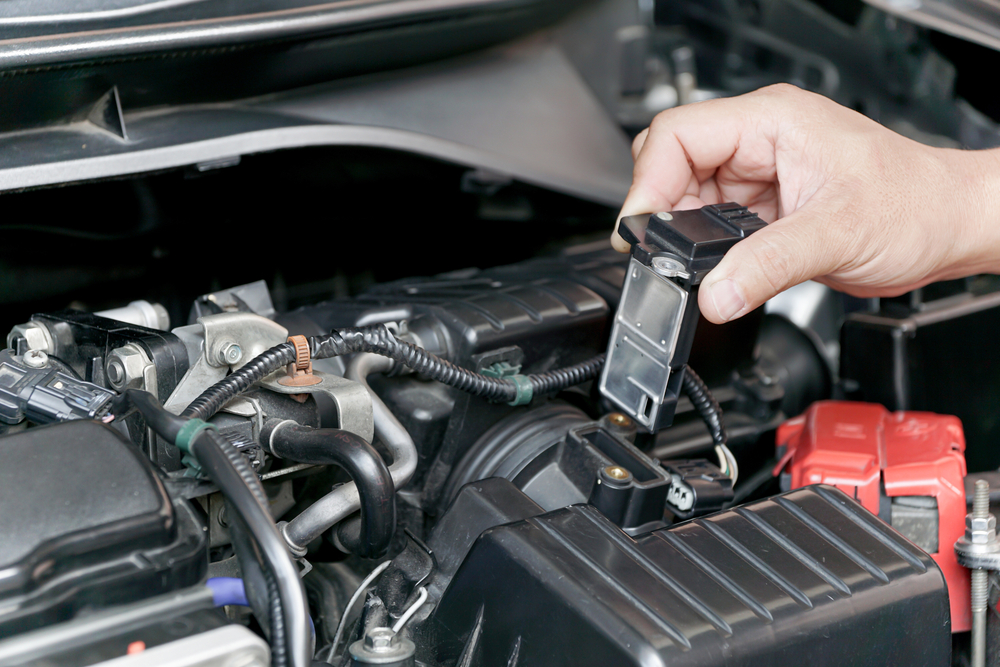 A MAF sensor is very convenient to get to on most vehicles equipped with one, and sometimes they don’t need to be replaced. If you can access the copper elements, it may be possible to simply clean the sensor and put it back.

Otherwise, replacing them usually only requires a few hand tools and 15 minutes. You can either do it yourself or pay a mechanic to do it for you since any shop will have the means to do so.

The following steps are all that are necessary for replacing a MAF sensor.

Determine if Your Vehicle Has One

The first step is to determine if your vehicle has a MAF sensor or a MAP sensor. Some cars may have both. The easiest way is to do a quick google search for your make and model of car and airflow sensor. Chances are good that the first pages will be titled with either “… MAP sensor …” or “… MAF sensor ….”

A MAF sensor will be located on the intake tubing. It must be there because it needs to measure the amount of air before the manifold. That makes it easy to find since most of the work is done once you have located the air filter. Simply find the filter and trace the intake back to the motor. Somewhere along, there will be some wires plugged into a plastic box. That plastic box is the MAF.

Spraying a gentle degreaser and wiping up around the area can help prevent debris from falling into the engine. It will also make things like bolts and clips easier to find. Cleaning the area you are working on in an engine bay is just a good habit no matter what you are doing.

The connector may have a tongue you need to press down on with a screwdriver while you wiggle the connection loose. These tongues and retainers can be a bit stubborn sometimes, but it’s important to be patient and not break them. They are necessary for preventing the wires from disconnecting while you drive.

Remove the Air Filter and Intake if Possible

The MAF can often be inconvenient to work on from the top of the motor. If you simply remove the piece of intake that the sensor is attached to, it makes getting to the bolts holding the sensor very easy to get to.

There are two common types of MAF. The first type is simply a black box with a long probe that sits in the airstream. These are held in with usually one or two bolts. Once you remove the bolts, they should slide out of the attachment point easily.

The second type resembles big rings with hose clamps on both sides holding them in place. Simply undo the hose clamps or flange bolts, and the MAF sensor will be isolated.

MAF sensors can often be cleaned and reinstalled rather than replaced. What you need to locate is the hot wire. It will look like an exposed metal wire. It may be thicker in the middle than the ends, and they are usually less than an inch long. Be very careful not to damage this wire, it’s what allows the entire sensor to operate.

These hot wires get dirty over time. Sometimes fine particles aren’t trapped by the filter, or they get covered in oil from oil element filters like the ones made popular by K&N. To clean them, use a q-tip dipped in 97% rubbing alcohol or a dedicated electronics cleaner and gently scrub them clean. It shouldn’t take much force to dislodge any dirt or dust, which is good since it’s vital that you don’t accidentally break the wire.

If you can’t access the hot wire or your vehicle uses a different MAF sensor style, you may have to simply replace the sensor. They can be a bit expensive, especially the metal donut style sensors. You can generally expect to spend somewhere between $40-200 depending on your make and model. Newer vehicles tend to be much more expensive than older vehicles because the sensors are much more complicated.

Place the New Sensor and Plug It In

When you reassemble the intake, be careful not to get dirt or grease into the intake. Also, while you have the intake apart, take a look for any place that you can clean that you wouldn’t be able to from the outside. Simply wiping up oil and dirt from around the throttle body can prevent the newly cleaned MAF sensor from getting dirty as soon as you start the car.

If you have an oil element filter, you should also take this opportunity to clean it. Reusable air filters need servicing much more often than paper filters, and most people do not service them often enough, which leads to dirty MAF sensors.

A mechanic should be able to change or clean a MAF sensor in less than an hour if you don’t feel like doing it yourself. You can expect to pay between $75-150 for their labor. If they are only cleaning it, that should be the extent of the bill.

If they have to replace it, though, they may have to special order it, and that can take both extra time and add a significant amount to the cost. It’s not uncommon to see special MAF sensors retail for over $200, which means your total, including labor can be anywhere from $100-400 depending on where you are located and how much the sensor costs.

A failing or dirty MAF sensor can cause all sorts of headaches. They are simple things, though, and it’s a problem that is relatively straightforward to solve. We hope that you found this guide helpful if you are experiencing poor engine performance due to a dirty mass airflow sensor. A Q-tip and some elbow grease can go a long way towards alleviating your headache.