Everybody knows that not having enough oil in their car is bad. Surprisingly, not many people realize that having too much oil is just as bad, or in some cases, much worse. The consequences of having too much oil in your car’s engine can be catastrophic – especially for diesel engines.

In this article, we’ll tell you everything you need to know about excess engine oil, including what oil does for your engine, the symptoms of having too much oil, and how you can remove excess oil.

The Role of Engine Oil in a Car

Before we jump into the meat of this article, let’s first look at the role of engine oil in your car. We all know what fuel does and how important it is, but many people don’t fully understand the role oil plays or how important it really is.

Oil does many things for your engine. It lubricates moving parts to reduce friction and wear, which prolongs your engine’s life. Oil also dissipates heat and lowers engine operating temperatures, further prolonging your engine’s life and helping it run optimally.

Ultimately, while oil doesn’t directly make the engine run, it does have a crucial role in the proper functioning of an engine. Too little or too much, and you will have a serious problem on your hands.

The number one cause of excess oil in a car’s engine is overfilling. You (or your mechanic) may have added too much oil to the engine when performing an oil change. Or, you may have topped up the oil, mistakenly thinking it was too low.

There are other causes, too. Some issues cause additional fluids to mix with the oil, causing the oil level to rise. These issues include condensation building up within the engine, fuel making its way past defective piston seals (called cylinder blow-by), or a damaged gasket allowing the coolant and oil to mix.

Later in this article, we’ll address how to resolve these issues. First, here are the main symptoms of excess oil.

So, what are the main symptoms of excess oil in your car? There are several telling things to look out for, which we’ve listed below. It is worth noting that these symptoms aren’t always indicative of too much oil; they can be caused by other issues. 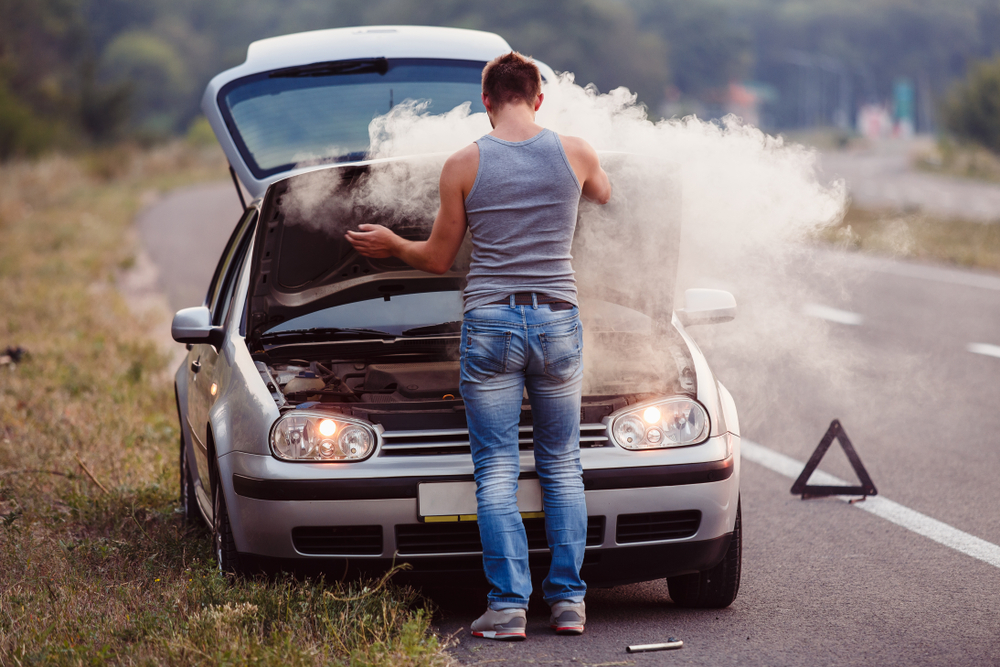 At this point, you know that too much oil is bad, but what does it actually mean for your engine? Well, there are many dangers to having too much oil in your car, many of them potentially serious. Below are some of the most common dangers.

Warning for Owners of Diesel Cars

While too much oil is bad for any car, regardless of whether it runs on gas or diesel, it can be an even more severe problem for diesel cars. This is because of the way diesel engines work.

Gasoline engines use spark plugs to power the car when combined with air and fuel (gas). Gasoline is extremely flammable; give it enough air and a source of ignition (a spark), and it’ll explode. If a gasoline car has too much oil and it seeps into the cylinders, the combustion process will be hindered or stop altogether. This results in your car running rough or failing to start at all. That’s not too catastrophic in the grand scheme of things.

Diesel, on the other hand, is not very flammable (although it is combustible). Instead of using spark plugs, diesel engines use glow plugs to heat up the cylinders. Once the cylinders are hot enough, the engine only needs fuel (diesel) and air to create combustion; the glow plugs are no longer required. If oil gets into a diesel engine’s cylinders, the oil itself will ignite and keep the engine running. This means that the combustion process won’t stop, even if you turn the engine off. That’s because there’s a constant supply of fuel in the form of oil, plenty of heat, and a virtually unlimited amount of air.

The result? A runaway diesel. Your diesel car will rev itself to destruction, even if you turn the engine off. It’ll only stop if the air intake is blocked, when it runs out of oil, when the engine destroys itself, or if you can successfully stall it by putting it in a high gear. It sounds pretty scary, and it is. This video shows a runaway diesel in action.

This is why you need to be extra careful about oil levels if you have a diesel car.

How to Check Your Engine Oil Level 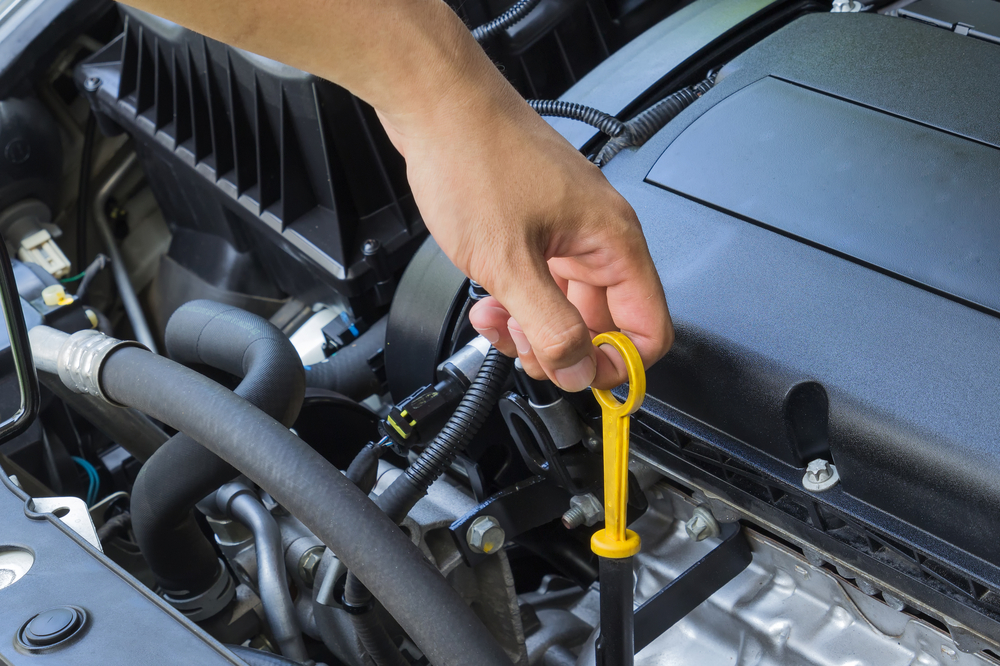 What can you do if you suspect that your car has too much oil and you have some of the symptoms described above? The best way to check is by taking a look at the dipstick to determine the oil level. Here’s how.

Before checking the oil level, make sure your car is on a flat, even surface. If it’s sitting unevenly, the reading may be inaccurate. Likewise, don’t check the oil immediately after driving; much of the oil will be in the head of the engine, giving you a lower reading than what’s actually there. Always check the engine oil when the engine is cold, or at least after having cooled down – wait at least 10 minutes after driving before checking.

The dipstick is located in the engine bay and is usually bright red or yellow, depending on your vehicle. The dipstick will have markings indicating the level of oil in the engine. The higher the level, the more engine oil you have. 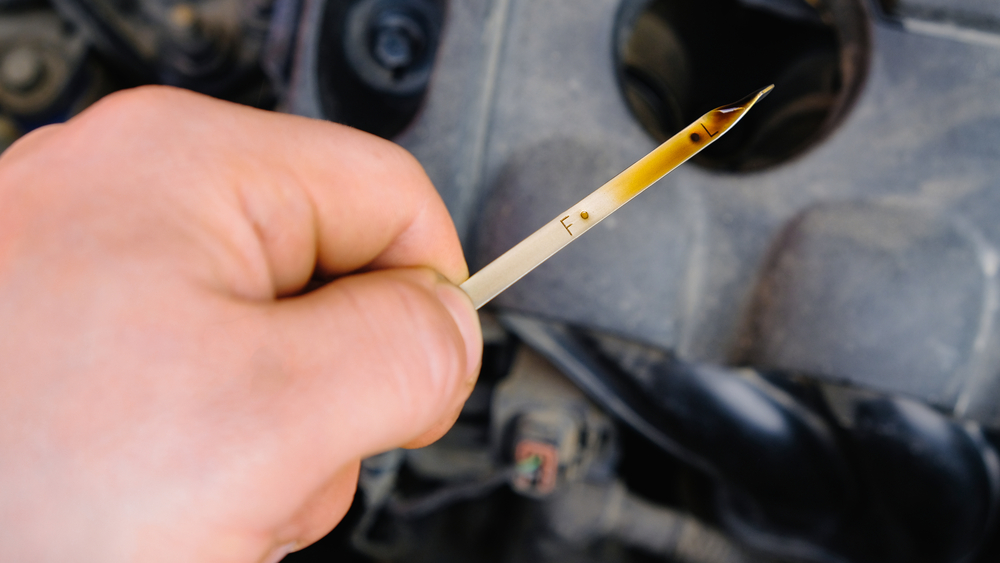 How to Remove Oil From the Engine

Thankfully, removing excess oil from the engine isn’t too tricky. While it is a bit messy and time-consuming, anybody can do it. Plus, it’s much better (and cheaper) than having too much oil destroy the engine.

Below are three ways you can remove engine oil.

1.  Extracting Oil With a Pump

You can use a pump or syringe to remove excess oil from the engine via the dipstick tube. This is perhaps the easiest and least messy way of removing oil.

You will need to purchase an oil extraction pump if you don’t already have one. An alternative is to use a large syringe with some rubber tubing, although this is a more time consuming and messier process.

You will essentially be sucking oil out of the engine via the dipstick tube. Keep removing oil until the dipstick reads at the correct level.

2.  Draining Oil From the Sump

Another way to remove excess oil is by draining oil from the sump. This is probably the least preferred method. It’s difficult to control the amount that comes out, and it’s extremely messy.

This is the most costly way of removing excess oil, but it does guarantee the oil level ends up correct. It’s also good to change your car’s oil at regular intervals, so if you haven’t changed the oil in a while, we recommend this option.

If you don’t mind getting your hands dirty, then you can perform an oil change yourself. Or, if you’d prefer, you can pay a garage to do it for you. Once the oil is fully drained, you can refill it back to the correct level.

How Much Oil Should You Use?

That’s the million-dollar question! The right amount of oil to use depends on your engine’s capacity. Typically, engines take between 4 and 8 liters, depending on the engine’s specific make and size.

As a rough guide, the following amounts should be used:

Smaller engines may only require 4 liters, while larger engines may need more than 8 liters. You can check your vehicle’s owner’s manual to find out the exact amount.

If you don’t have the manual, you can simply add a small amount of oil and then check what level it’s at using the dipstick. If you need more oil, add a little more, and then recheck it. Rinse and repeat until it’s at the right level.

As we’ve seen, having too much oil in your car is dangerous, and you should get it sorted as soon as possible. Driving around with excess oil can cause a myriad of issues that will ultimately reduce your engine’s lifespan, and in some cases, completely kill it.

Thankfully, it’s a problem that can be easily avoided by using the correct amount of oil for your car. Just keep an eye on the oil level to make sure it doesn’t get too high. Spending a few minutes checking it every now and then can save you a lot of money and hassle in the long run!