Home › Knowledge Base › All About UTQG – Uniform Tire Quality Grading

Uniform Tire Quality Grading, or UTQG for short, is a metric that makes it easy to compare tire performance. It is calculated by comparing the tire against a “standard” tire and telling you how long a tire should last and how well it should perform in various conditions.

However, there are some valid criticisms about the UTQG rating system and its relevance in the modern age. It can also be difficult to find, since unlike size and service descriptions, UTQG ratings are not required to be shown on all tires.

In this part of our series describing the properties of tires, we’ll look at what the UTQG is, what might be wrong with it as a rating system, and how you can best utilize it when making a purchasing decision.

The Three Parts of UTQG 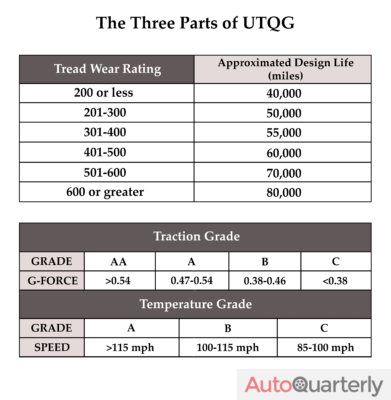 The UTQG is composed of three separate ratings: the treadwear rating, the traction grade, and the temperature grade.

When a new tire is rated, it is rated by comparing it to a standard test tire. The standard tire will have a rating of 100, so a rating of 200 should mean that the new tire will last twice as long as the test tire. A rating of 350 means it should last three and a half times as long, and so on.

Because the rated tire is compared to another tire driven on real-world public roads, it is impossible to control for things like road condition, temperature, and driver input.

Compounding the issue is the fact that the tests are very short. Even though the average tire should last 50,000 miles or more, the UTQG test only lasts 7,200. If a tire is destined to fail at 9,000 miles, the test will not reflect that.

That means that even though a tire with a tread rating of 500 should last 5 times as long as the test tire, it is very unlikely that it actually will when driven under normal driving conditions.

Unlike the treadwear rating, the traction grade is much more objective. It measures the ability of the tire to maintain traction on a wet surface.

The traction is measured by locking the tires while on a wet road and measuring the g-force. The higher the braking g-forces, the better the tire performs, and the better your brakes will work on wet asphalt.

The following table shows the breakdown.

The temperature grade is the tire’s ability to handle heat, and it often is tied directly to the speed rating. It is a letter grade of either A, B, or C, and the grades are meant to represent the maximum speed the tire can handle.

In the United States, a C temperature grade is required for tires to be legal for use on roads.

Unfortunately, these ratings are usually not as useful as the more specific speed ratings. For that reason, the temperature grade is usually left off manufacturers’ descriptions.

How UTQG Is Calculated

To rate a tire, they perform three tests.

We touched briefly on the tread test above. It’s a complicated, arbitrary, and subjective test, which is why the rating is so heavily criticized.

Basically, they put government test tires on a group of vehicles. Those vehicles drive around Texas for 7,200 miles. The tread is then measured, and given a score of 100. If after 7,200 miles the tread has worn down 20%, that becomes the standard on which other tires are based.

Then they perform the same test with the new tires that are being tested and compare them to the government test tires. If the tread has only worn down 10% after the test, for instance, it can be expected to last twice as long as the reference tire. The rating would be 200.

The braking test is much more scientific. The test wheels are attached to a trailer. The same trailer is used for all tests to control for the vehicle weight, power, balance, etc. It is accelerated up to 40mph on a wet asphalt road, and the brakes are applied. Sensors measure how much the tires “grab” by calculating the force and the coefficient of friction.

The temperature test is even more straightforward than the braking test. They just spin a wheel at high speeds until it fails. Then they lower the speed and try again. The speed that doesn’t cause it to fail is the rating.

The manufacturer will often have already done a series of speed tests and determined the car’s speed rating, so the lab can simply double-check to make sure that the speed rating is accurate.

The Problems With UTQG 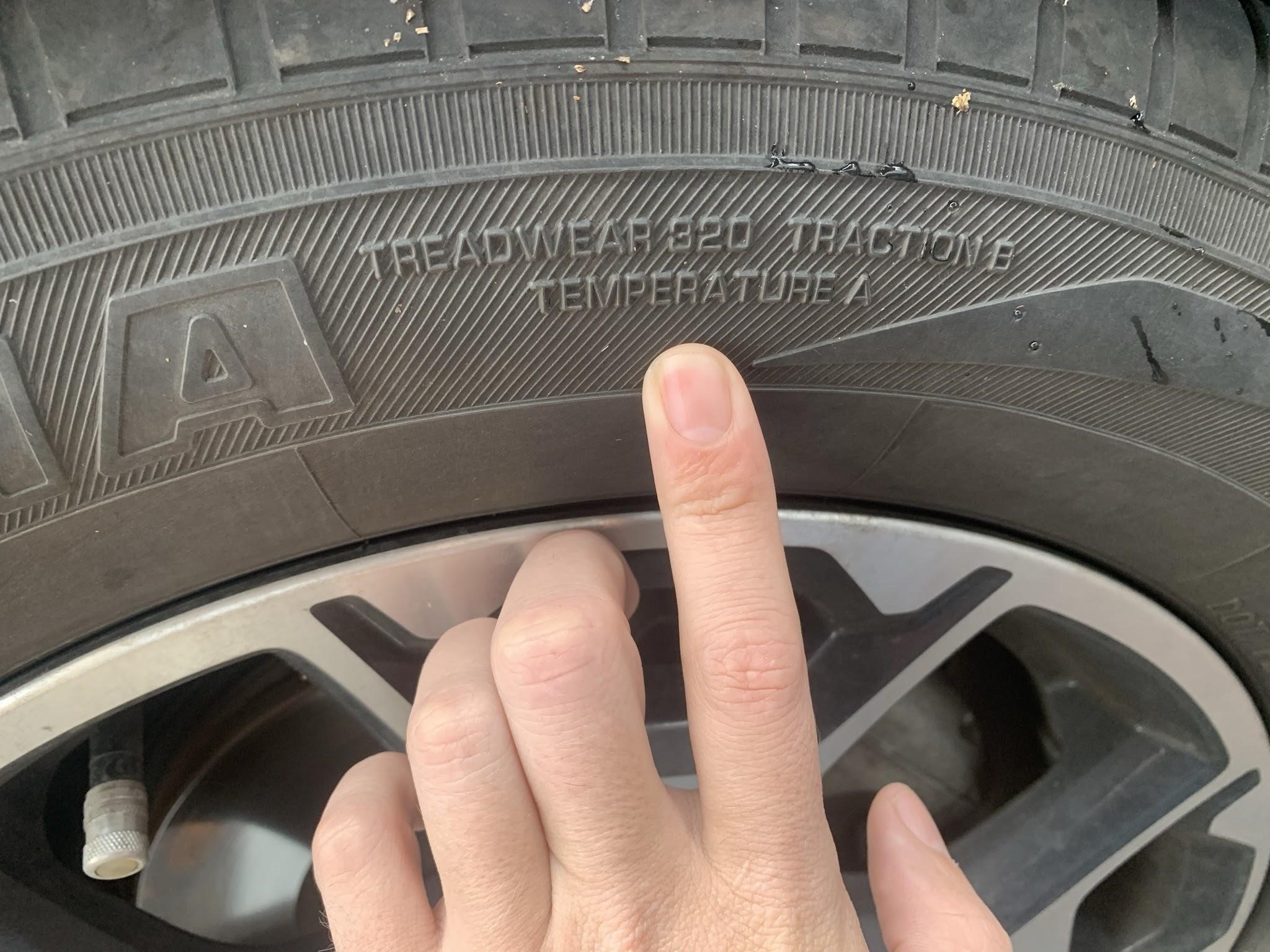 The biggest problem with UTQG is that its value to a consumer is very limited. First, there are a lot of issues that can be raised with the tests.

The treadwear test in particular has faced a lot of criticism because of the short duration of the test and the lack of control over variables. There can be giant lifespan discrepancies between two tires in normal driving conditions, even if they have the same rating.

This can lead to manufacturers advertising a high UTQG tread rating even if the tire will fail sooner than a competing tire with a lower rating. Tires can fail for various reasons, and cheap tires are much more prone to sidewall damage or other issues despite often scoring a high wear rating because they are made from hard compounds.

The other problem is that the ratings as a whole do little to represent real-world driving. Most people drive on dry pavement and concrete, for instance, and probably care more about the tire’s grip in a corner than its ability to stop a trailer.

Using UTQG to Buy a Tire

Because of its shortcomings, using the UTQG rating to compare tires from multiple manufactures is not recommended. However, it can be a very useful metric for comparing different tires from the same manufacturer.

For instance, the Bridgestone Driveguard All-Seasons have a rating of 500 A A. The Bridgestone Dueler H, which is another All-Season tire, has a rating of 400 A B. You can reasonably conclude that the Driveguard line will last longer than the Duelers. They are both from the same company, and therefore the testing conditions and constructions are likely very similar.

This Is Part of a Series All About Tires

Our aim is to demystify the tire buying process and help you make the best decisions possible. Feel free to continue learning by jumping over to one of the following topics: