Home › Knowledge Base › What Does the DRL Warning Light Mean?

Daytime Running Lights (DRL) helps to keep you and  other road users safe. So, it doesn’t hurt to know how this life-saving illumination system works. In some countries, cars are required to have daylight running lights. Although U.S. cars are not required to have them, many in the U.S. are fitted with one.

So, even if your car did not come with the DRL system, chances are you’ve noticed cars pass by with half-bright front lights at dusk or dawn or in dim weather conditions like the rain. That’s the Daytime Running Light.

What Is a Daytime Running Light? 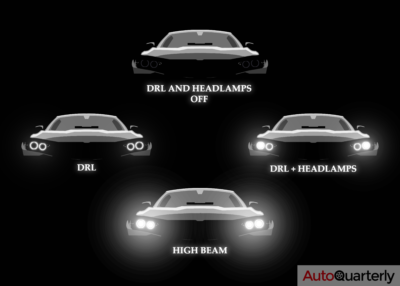 Daytime running lights (DRL) are low-beam headlights that help keep your car visible during daylight hours. It is an automated lighting system placed at the front of a car. The light is automatically engaged when the ignition is turned on, and the car is in motion. It emits a whitish, or yellowish, or amber light to improve visibility for other road users, especially in blind spots. The DRL light is dimmer than your normal car headlights.

DRLs were originally used in parts of the world like Scandinavia, where it was mostly dark. During the winter months in Scandinavia, it is dark most of the time and DRL was a necessity. DRLs were thus an important safety measure to reduce the rates of road accidents.

DRLs don’t have rear marker lights and are not to be used as a substitute for headlights. The system is automatic, and the way it works varies in the different car makes and models. In some vehicles, the DRL system can be disabled.

The Daylight Running Light can be disabled by removing the fusible boxes from both the left and right sides of the car. But really, who wants to get rid of their DRL? It’s an important safety feature such that you can’t always predict when you might need it.

What Triggers the DRL Warning Light On?

Some people wonder if it’s safe to drive with the DRL warning light turned on. The DRL comes on a few seconds after the ignition is turned over. The light automatically turns off the moment you release the parking brake. In other words, the DRL system is designed to automatically go away when it detects that you’re all set with road visibility or that you don’t need it.

So, you get a DRL warning light on your dashboard if the system develops a problem that prevents it from doing its job properly. For example, if the DRL fails to turn off in normal weather and driving conditions, the DRL warning light notifies the driver that the DRL lights are on when they shouldn’t.

Can You Drive With the DRL Warning Light On?

There’s obviously no need to panic over a DRL warning light. However, it’s always advisable to get it checked out by a qualified automobile technician if the lights persist and won’t turn off or turn on as they should.

The issue could be a faulty bulb that has burned out or problems with fuses and relays. If the problem is due to damaged wiring, a qualified auto mechanic should be able to fix it and have you back on the road in no time.

Routine checks and maintenance are how you can promote your vehicle’s overall performance and longevity, including the optimal health of your vehicle’s DRL system. Don’t be one of those who don’t bother with their car owner’s manual.  It helps to have spare bulbs in case you need them at a critical moment, and you can learn how to swap out burnt-out bulbs. It’s equally important to keep the lights clean and free of dirt and debris.