Modern vehicles are stuffed full of electronics, but the truth is cars have had a complicated electrical system since the 1800s when the first electric carriages rolled out of the workshop. When those electronics decide not to work, it doesn’t matter when they were invented; it’s really annoying. Unfortunately, electrical issues are some of the most difficult to diagnose and solve problems that a car can experience.

In this article, we will talk about what the first step is anytime your car has an electrical issue. You see, while it is true that a broken relay that’s hidden underneath four plastic covers can be a pain to replace, there is a more likely issue that is much easier to solve. That issue is a poor connection between the circuit and the ground. We’ll talk about symptoms, why grounds are important, and how to solve the problem as we move through this article.

Symptoms of a Bad Ground

The symptoms of a bad ground usually get worse over time. They might start out very minor, and then one day your car won’t start. That means it’s important to check for a ground issue as soon as notice problems. You don’t want to put it off until your car leaves you stranded in the drive-thru.

These are the five most common symptoms of a bad ground. You will need a multimeter to test some of these problems, so if you don’t own one, you may need to buy or borrow one. We have one we recommend in this article, and the wonderful folks at iFixit have a nice guide on how to use it.

The biggest problem you will face when diagnosing a bad ground is that the symptoms are nearly identical to a failing battery. A battery that cannot produce adequate voltage will cause lights to dim and flicker, and it will cause starting problems.

It’s important that you have your battery tested or use a battery you know is healthy when diagnosing an electrical problem. It’s easy to get caught up in the moment and forget to check the battery, and you’ll really want to kick yourself if you rip out miles of cabling only to find out that the battery was the issue all along.

What Is a Ground Connection Anyway?

Your car’s electrical system has two main components that keep power flowing to everything in the car. The battery is the most straightforward component; cars use a 12v DC battery. The other component is the alternator, a tiny electric generator that’s run by the serpentine belt.

The alternator has two functions. First, it keeps the battery charged. Second, when the engine is running, it’s actually the alternator that runs all the electronics. Both of these components send DC power to the rest of the car, and consequently, a car’s entire electrical system uses DC voltage.

ACDC is an awesome band, but in this context, AC stands for “alternating current” and DC stands for “direct current.” The electricity you get in your house is AC power. As we mentioned above, the power in your car is DC.

What that means for us is that everything on the car that needs electricity has two connections: a positive, or hot, connection and a negative, or ground, connection. Power flows from the negative battery terminal through the device and ends up at the positive terminal.

The car is divided up into circuits. Each circuit has its own positive wire and usually its own fuse. All the negative wires end up tied together, though, so you don’t need a separate wire for each negative connection. You just need one wire that all the circuits tie into.

A car has a lot of metal parts that conduct electricity. The frame, engine, transmission, and oftentimes the body are all conductive, so instead of running wire for the negative side of the DC circuits, they just connect the negative battery cable to the conductive part of the car. Then all you have to do to complete a circuit is connect the device to the car itself.

All the conductive, connected parts of the car make one big negative power cable we call the “ground.”

Some older cars get a little bit weird and actually have the polarities reversed. The ground will be positive, and each individual circuit will be attached to a negative fuse block. It’s a little funky; you can read about those cars here and probably won’t ever encounter them. But we want to make sure you are aware of it since you can hurt yourself pretty badly if you dive in expecting things to be negative and they aren’t.

What Is a Bad Ground?

A bad ground is simply a term to say that the car’s electronic devices are not making adequate contact with the ground. The battery and the alternator are both grounded via their negative terminals, and the rest of the car is grounded thanks to a series of “straps” and bolts that connect all the metal bits together.

When the negative cable on the battery or alternator isn’t making a good connection or a ground strap going from the engine to the chassis has broken, whatever components are attached to the device with the broken connection will no longer receive power.

How to Find a Bad Ground

Now that we know what a bad ground is, the next step is finding the offending connection. There are two steps, but they don’t need to be done in order. It’s easier to keep both in mind and work through them simultaneously.

Use a Multimeter to Test the Connections

Testing a ground is straightforward but time-consuming. You will want to think of the car as a bunch of separate chunks of metal. Each chunk of metal should be connected to the negative battery terminal.

You test them by sticking one probe from your multimeter on the negative terminal and touching metal things with the other probe to check for continuity. You can do that with a continuity tester, but it’s better to use the resistance setting on the multimeter and check for less than five ohms.

If you find that the engine or chassis does not have a good connection to the negative battery cable, then you can start narrowing it down. You can also check individual components, like the radio ground or the headlight ground, if you have noticed issues with those devices. The grounds can fail on a small part, but you won’t have any of the other issues.

As you test for ground contact, make sure to look at the cables and connections themselves. A bad ground is rarely hidden; you will find a loose bolt or broken wire. Make sure to take a good look at the starter. If the alternator ground is failing, that’s the place it’s most likely to be making a bad connection.

There are some other signs of a ground issue that you can look for too. Black scorch marks are indicators of sparking, which can happen if a ground strap is loose or a positive cable comes in contact with the ground. You may also find studs with no wire attached where a ground strap has simply fallen off the car completely. If you suspect that has happened, your best course of action is to consult a full-service manual or the internet. Unfortunately, no two cars use the same attachment points.

How to Fix a Bad Ground 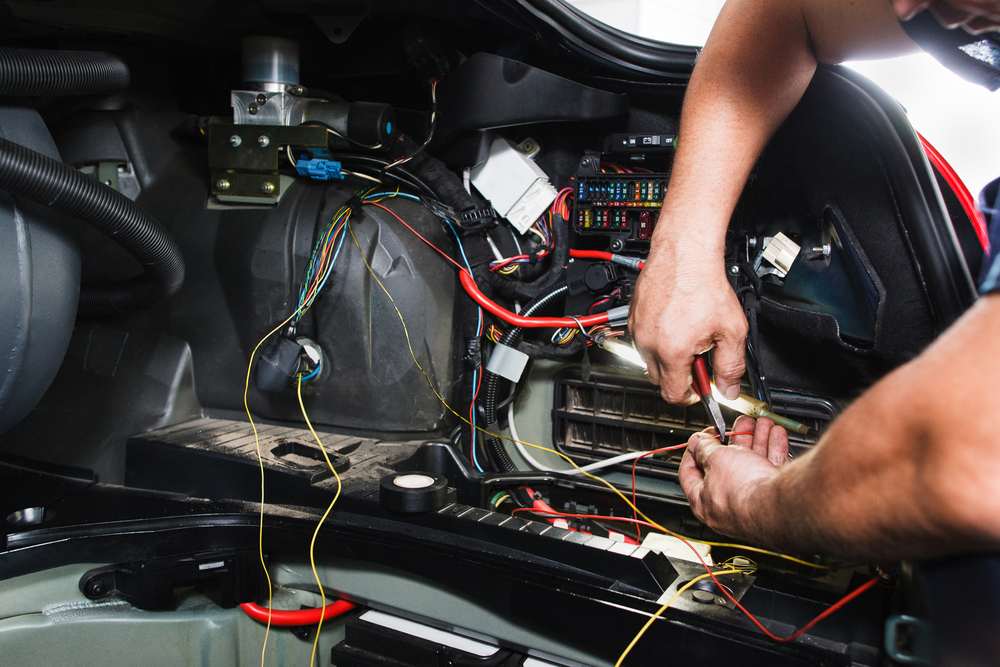 Fixing a bad ground is usually a pretty straightforward process. You only need simple tools and maybe a bottle of your favorite cleaning agent. The only parts you might need are some wire and maybe a washer from the hardware store.

We really do suggest that you at least consider attempting to fix the issue yourself because a mechanic will charge you a lot to fix an electrical problem. It can take a couple of hours just to find the bad connection, and they will simply go through the same process we described above. They will charge you upwards of $300 to do it, though.

Every situation is different, so we can’t give you a step-by-step guide on fixing a bad ground. Once you locate the bad connection, the cause should be apparent. If it’s a loose or corroded bolt, clean and tighten the bolt. If it’s a broken wire, replace the wire. We can give you some tips and tricks, though.

Keep Current With Your Current

Direct current electrical systems are very simple, which is good because they have a habit of needing to be fixed. If you are methodical, you can find a ground issue and fix it yourself. That will save a ton of money and make you feel great about conquering a task that many people are not willing to attempt. We hope this article gives you the confidence you need to keep your car’s electrical in tip-top shape.