One of the most common signs of a bad wheel bearing is a grinding or squealing noise. If you can no longer bear the sound of your wheel bearings, you’re in the right place.

This article will look at the most common causes of wheel bearing noise, as well as six signs you have a bad wheel bearing. To finish off, we’ll run through how much a wheel bearing replacement costs.

What Is a Wheel Bearing? 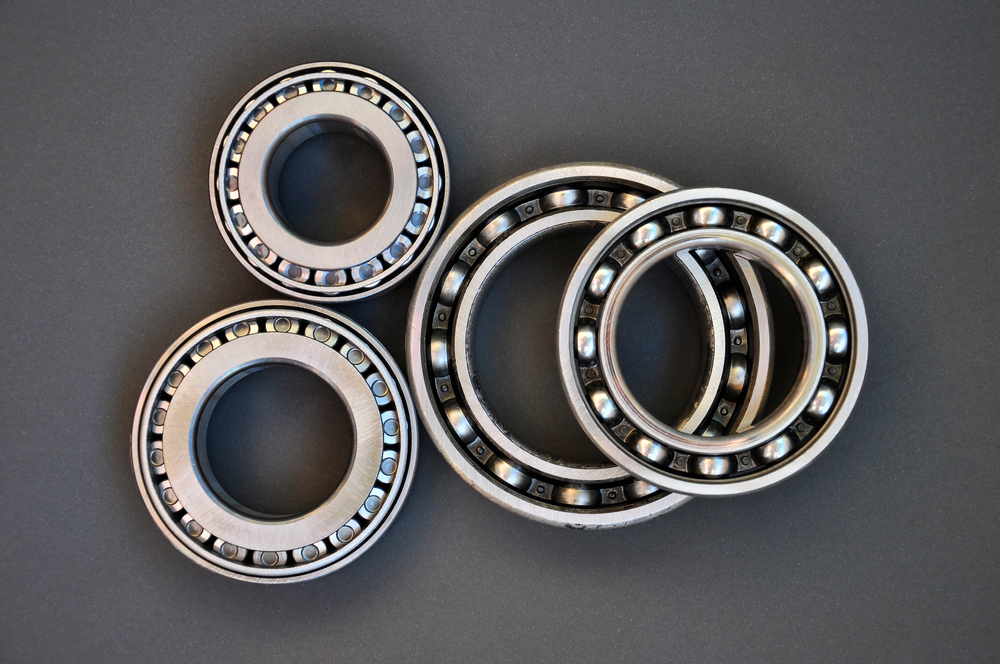 A wheel bearing is simply a set of steel balls inside a ring, called a race. The wheel bearing sits inside the wheel hub and rides the metal axle shaft to reduce friction as the wheels spin. For those who don’t know, a hub is a hollow piece of metal that sits in the center of your wheels to keep everything together. A four-wheel car will have four-wheel bearings, one for each wheel. That’s two at the front and two at the rear.

Wheel bearings must be kept tight in the hub to avoid water and dust ingress. The bearings also support the entire weight of your vehicle. As you can imagine, the bearings suffer from a lot of abuse, especially when driving through potholes or taking sharp corners. As with any other component, they wear out and will need replacing at some point. 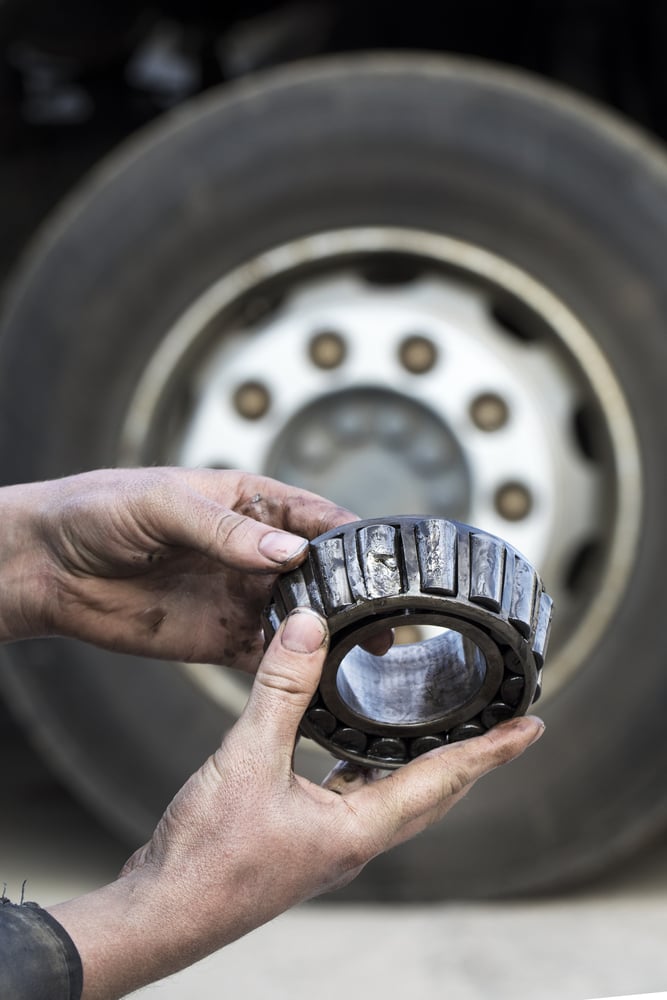 Lack of lubrication, water and dirt ingress, and general wear and tear are the main reasons wheel bearings go bad. The five most common reasons for these things happening are listed below.

Wheel bearings must be installed correctly to ensure they’re seated tightly in the wheel hub. Incorrect installation can allow moisture and dirt to enter the bearing, which causes premature wear and eventually failure.

Besides that, incorrectly installed wheel bearings can cause weak points in the bearing, which causes it to become damaged and fail. This is due to the strong lateral forces produced when turning your car, in conjunction with the bearing taking the vehicle’s entire weight.

Your wheel bearings will be correctly installed from the factory. However, if you have an older car that has already gone through a wheel bearing replacement, or if you’ve installed a replacement wheel bearing yourself, there’s a chance they’re not installed correctly. Always get a competent mechanic to install these parts for you for peace of mind.

Wheel bearings are under immense pressure during driving, so they have been designed to release pressure. A petroleum-based lubricant is used to reduce pressure and friction, but unfortunately, this lubricant doesn’t stop water from getting into the bearings.

Driving through deep water can cause water to mix with the lubricant, rendering it ineffective. This results in excess wear and tear on the ball bearings due to increased friction and excessive heat.

While it is tempting to drive through huge puddles, avoid them if you can. Deep floodwaters can cause even more serious issues like a seized engine caused by hydrolock, so don’t be tempted to drive through floods — find another route.

Remember that wheel bearings take the whole vehicle’s weight, meaning there’s a lot of force on them. Driving on rough roads or through potholes causes sharp jolts which pass through the wheels. This can cause the ball bearings to be forced into the race — the grooved ring where the bearings are seated — ultimately resulting in imperfections with the ball bearings.

In turn, imperfect ball bearings produce more friction and heat, thus wearing down the wheel bearing quicker. While this won’t cause immediate wheel bearing failure, it is the beginning of the end for the bearing, and it’ll fail in the not-so-distant future — especially if you continue to drive on rough roads.

Unfortunately, some locations are littered with potholes, and avoiding them can almost be impossible. Still, if you can make a conscious effort to avoid driving over potholes, that will help reduce damage to the wheel bearings.

There are many parts to your car’s wheel system: wheel bearings, lower arms, wheel hubs, knuckle arms, shock absorbers, and tires. Unbalanced tires or wheels can cause premature wear to these important components, putting even more stress on the wheel bearings and causes them to fail prematurely.

To avoid this issue, you should have your wheels balanced by a professional when new tires are fitted.

Damage to the Wheels

The advice here is to drive carefully. We understand that sometimes accidents happen. If you hit something with your wheels and it’s a sharp impact, get your car checked over by a mechanic to be sure that nothing is damaged.

Signs of a Bad Wheel Bearing 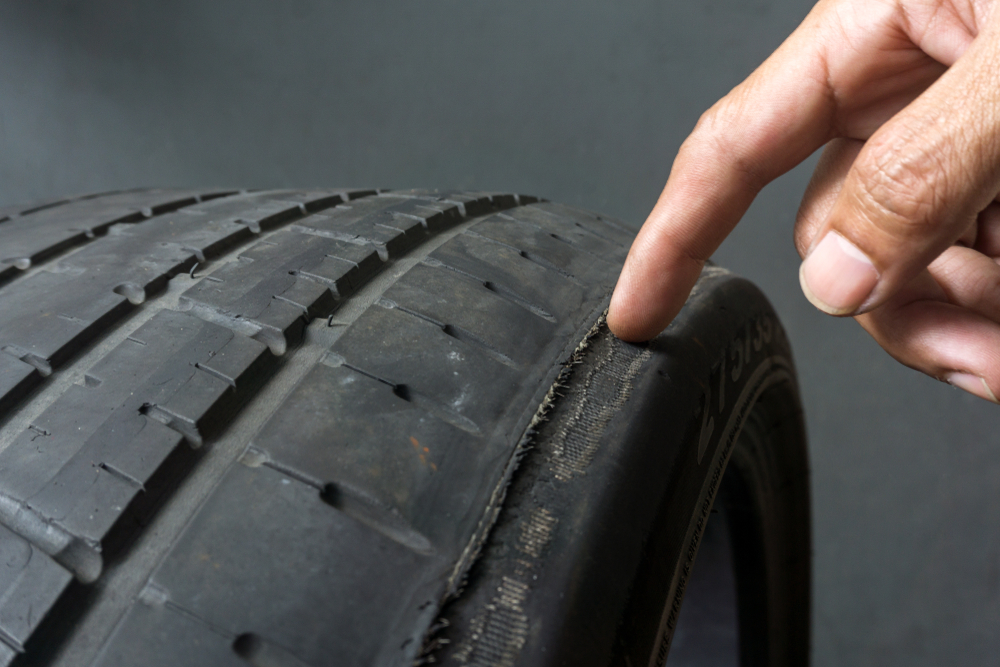 Below are some of the signs of a bad or failing wheel bearing. Often you’ll experience several of these symptoms at the same time. That’s a strong indication that it is the wheel bearing causing issues and not something else.

Look at the tread depth markings and the tire pattern — has it worn evenly, or is one side more worn than the other? You will need to get new tires if they’re worn past the legal limit.

Be sure to investigate and fix the root cause of your uneven tire wear, as it’ll only happen again to your new tires. You don’t want to be spending a fortune on new tires every few months.

Your car shouldn’t make any unusual noises, period. A grinding or squealing noise while driving is usually caused by a bad wheel bearing. Some people describe the noise as a humming, squealing, grinding, or growling — whatever it sounds like, it isn’t normal and should be a cause for concern.

The noise is normally caused by the lack of lubrication in the bearing, which causes excessive friction due to the metal bearings rubbing on the race. A good way to be sure that it’s the bearings and not something else is to listen for the sound while driving; if the sound changes in accordance with your speed, it’s most likely a wheel bearing issue.

Most of the moving components in your car get hot due to friction, and the wheel bearings are no exception. However, they shouldn’t get excessively hot — if you place your hand near the wheel and it feels like your almost touching lava, something is seriously wrong, and it can be due to a bad wheel bearing.

Without taking the wheel off and visually inspecting the wheel components, you won’t know for sure what’s causing the excessive heat. It might also be caused by brake problems, but regardless of the cause, it’s dangerous to drive with a wheel that’s excessively hot.

If the wheel seizes up while you’re driving, it could result in a serious accident and put your and others’ safety in jeopardy. Get it checked out ASAP.

A vibrating steering wheel isn’t normal no matter what’s causing it. It is dangerous, so get it sorted sooner rather than later.

Pulling to One Side

Bad wheel bearings can cause your car to pull to one side when driving straight, even when the steering wheel is positioned dead center. This symptom can also be caused by other issues, like bad breaks or incorrect tire pressure, so it should be investigated before blaming the wheel bearings.

That said, a bad wheel bearing is often the culprit. Worn bearings cause excessive wheel camber, which pulls the car to one side. You’ll also likely notice uneven tire wear if the camber is off. The pulling may be minor, or it may be aggressive, depending on how bad the bearing is.

Wheels have a small amount of play (wobble) as they’re a moving part. There shouldn’t be excessive play, though; if that’s the case, something is wrong with either the wheel bearing or the hub itself.

You can jack your car up, take the wheels off, and give each hub a wobble to see how much play there is. This video explains how to do that, step by step. If there’s a lot of play, you should not drive your car until it’s fixed; in a worst-case scenario, the wheel could shear off and cause a serious accident.

As mentioned previously, a car has four wheel bearings, one for each wheel. Some mechanics will recommend replacing both wheel bearings on the same axle at the same time, but that isn’t always necessary if only one is damaged and the other is in good condition.

These typically last a long time before they need replacing. If they need to be replaced, you can pay anywhere from $100 to $200 for just the parts — that price is for two wheel bearings on the front axle.

If you’re good with cars, you could do the work yourself and save on the costs of a mechanic. However, if you’re not too handy with a socket set, you’ll be better off letting a professional replace your wheel bearings.

A garage will charge roughly $150 to $300 for labor. That means the total cost of parts and labor at a garage is between $250 to $500 all in. The exact amount you’ll pay will depend on various factors, such as your vehicle’s make and how long it takes for the mechanic to complete the job.

You’ll pay roughly half the quoted cost — $125 to $250 — if you only need a single wheel bearing replaced. Your mechanic will be able to look at your wheel bearings and recommend whether just one or both need replacing.

Some vehicle manufacturers use rear hub bearing assemblies. These are essentially prepacked bearings inside the hub that must be replaced as a complete unit. Instead of replacing just the bearing, the entire hub will need to be replaced.

While replacing the entire hub bearing is quicker and easier than replacing just the bearing, the parts are more expensive. It’ll cost between $400 and $800 for two hub bearing replacements on the same axle.

Don’t Grin and Bear It

Get the problem looked at by a garage as soon as you notice that something is up — whether that’s weird noises, pulling to one side, or uneven tire wear.

A bad wheel bearing will only deteriorate further if you continue to drive. In a worst-case scenario, your wheel may seize up or come off. Nobody wants that; get it sorted before that happens.