Home › Knowledge Base › Got a Bad Oil Pump? Find Out the Symptoms and Replacement Costs

Do you know what your oil pump does? Okay, that’s a bit of an easy question; the name gives it away. While its job may be obvious, many people don’t realize just how important this component is for their car to function properly.

A bad oil pump can cause massive issues for your engine and your bank balance if it’s not sorted quickly. In this article, we’ll run through why the oil pump is so important, the main symptoms of a failing pump, and how much an oil pump costs to replace.

What Is an Oil Pump?

An oil pump is a small component located in the engine bay next to the engine block. Its job, as the name suggests, is to pump oil around the engine. Let’s look at how that works.

Cars have something called an oil sump which is where the engine oil is stored when the engine isn’t running. When you start your car’s engine, this oil is fed through to the oil pump, where it’s pressurized and pumped around to the rest of the engine via oil passages.

Oil’s primary job is to lubricate important engine components, such as the valvetrain and engine bearings. However, engine oil also:

As you can see, having enough oil flowing through the engine is crucial, and the oil pump plays a big part in that.

Unfortunately, oil pumps can go bad. A bad oil pump won’t supply the engine and all of its important components with enough oil, which can have lots of devastating consequences if it isn’t sorted out quickly.

What Causes an Oil Pump to Fail? 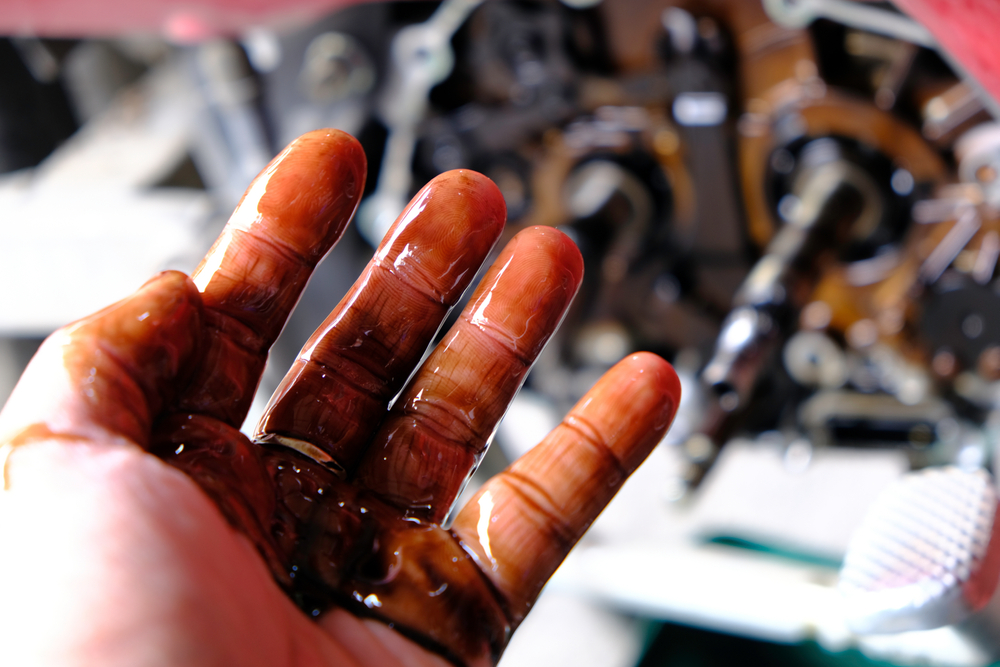 Several things can cause an oil pump to fail. We’ve outlined four of the most common causes below.

Bad engine oil is the number one reason why oil pumps fail. Bad oil is a pretty broad term, but it includes contaminated oil and the wrong type of oil for your engine, among other things.

Contaminated oil should be replaced by performing an oil change. You shouldn’t end up with contaminated oil if you change the oil at regular intervals.

Most engines these days require fully synthetic oil instead of the old mineral or semi-synthetic oil from yesteryear. You can read more about these types of oils here.

This ties in with bad engine oil; if you don’t perform regular oil changes, the oil will become contaminated. Oil also breaks down over time, resulting in it losing its heat and friction-reducing properties.

Making sure you change the oil regularly. Using the correct oil for your engine helps prolong the life of your oil pump.

Insufficient Oil in the Engine

The oil pump will struggle to function if there’s not enough oil in your engine. Not only will there not be enough oil to lubricate the engine’s internal components, the pump itself won’t be adequately lubricated, which can cause the internal parts of the pump to break down, further exacerbating the problem.

Keep an eye on your engine’s oil level and top up the oil when necessary to avoid this problem.

It’s normal for components to wear down with use over time, and that’s true of the oil pump. It shouldn’t come as a surprise if your oil pump starts to fail if it already had a long and stressful life. 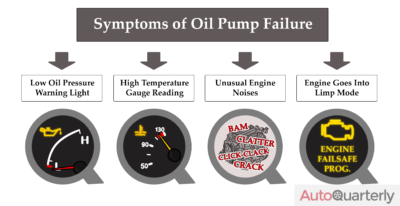 Below you’ll find four of the most common symptoms of oil pump failure. Your oil pump may only be starting to fail if you have any of these symptoms, or it may be as dead as a dinosaur.

Low oil pressure warnings shouldn’t be ignored — it’s a big issue that can cause severe damage to many engine components. You should stop driving immediately if this light comes on, as you won’t want to cause any further damage to your engine.

A low oil pressure warning light can also come on if there’s not enough oil in your engine. Be sure to check the dipstick to see what your oil level is at before replacing the oil pump.

Oil lubricates moving parts in the engine, reducing friction and heat. This reduction in friction, alongside the engine’s cooling system, helps keep the engine temperature in a specific range.

The engine’s internal temperature can rise dramatically if there’s something wrong with oil flow to the engine. This is due to increased friction from the engine’s moving parts, like the camshaft and pistons. In addition to increased wear on these parts, it also causes the temperature gauge reading to shoot up.

If your temperature gauge is reading in the red, you should stop driving immediately before more serious problems appear, like a blown head gasket or engine seizure. While other issues like a coolant leak can cause high engine temperatures, it can be caused by a bad oil pump. That said, you’ll likely experience more than one symptom if that’s the case.

Engines shouldn’t make odd noises; you should just be able to hear the gentle purr of your engine and perhaps the radio or your passengers talking. Anything else is bad. Various components can begin to make noises when there’s not enough oil getting around the engine.

The pump itself can make a whirring sound if there’s not enough oil. This is caused by inadequate lubrication of the pump’s internal gears, which can cause them to wear and break down.

You may also hear noises from the top of the engine; this is likely caused by unlubricated hydraulic lifters tapping. No matter what unusual noises you hear from the engine, they’re not good, and you should get them checked out ASAP!

Most cars will go into limp mode when they detect that something’s wrong with the engine. This is a safety feature designed to protect the engine from further damage.

Limp mode will limit the engine’s power output, resulting in a drop in performance. That means your car won’t accelerate quickly. Some cars even limit the top speed to around 30 miles per hour when in limp mode.

The check engine light will also appear when your car decides to enter limp mode. You can use an OBD scanner to look for any error codes relating to oil pressure or the oil pump. It is worth noting that an engine can go into limp mode for other reasons, such as when there’s a fault with the transmission. 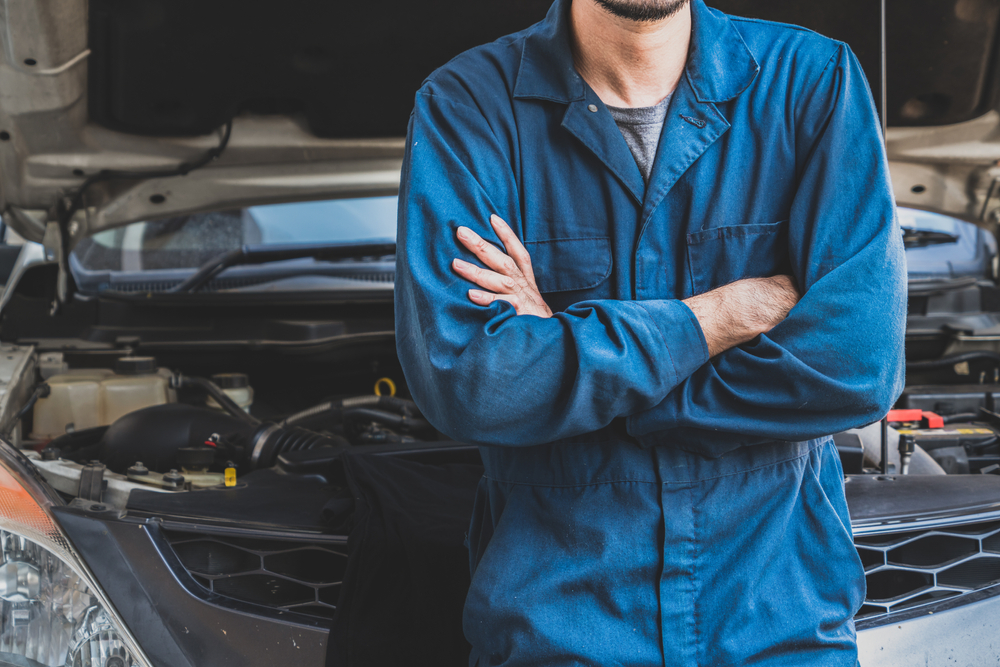 How much lighter will your wallet be after you’ve paid for an oil pump replacement? Well, that depends on which route you take.

You have two choices here: buy the parts and fit a new pump yourself, or take the easier but more expensive route and pay a mechanic to do the hard work.

A new oil pump will set you back $100 to $200 just for the parts alone. A garage will charge for around 2 to 3 hours of labor to replace an oil pump, which works out to around $200 to $300. That price may be more or less, depending on the garage’s hourly rate.

So, for parts and labor, you can expect your wallet to be $300 to $600 lighter after an oil pump replacement carried out at a garage. That may seem expensive, but it’s a drop in the ocean compared to having the top end replaced, which can happen if you don’t get a bad pump sorted in time.

It might be worth having your car’s oil changed while the pump is being replaced, especially if it hasn’t been changed in a while.

Oil changes are pretty easy to do yourself, so you can save an additional $50 to $100 on a mechanic changing the oil if you want to save some cash. Make sure you get the right oil for your car, though, as the wrong oil could cause additional problems for your shiny new oil pump.

We’ve got a good guide that compares the best synthetic oils on the market if you want to do an oil change yourself.

Can I Drive With a Bad Oil Pump?

Your car will probably still drive even with a bad oil pump. The question is, for how long? That’s anyone’s guess. You shouldn’t drive a car with a bad oil pump, as having low oil pressure and not enough oil in the engine can result in serious damage to your engine.

It’s much better to spend a few hundred bucks on a new oil pump than a few thousand on a full engine rebuild. Don’t drive if your oil pump is bad — get it seen to right away if you think it’s failing. A mechanic will be able to confirm whether it’s the pump or something else.

Can I Replace the Oil Pump Myself?

Sure. Changing an oil pump is a relatively straightforward job so long as you have the right tools and some experience with working on engines. If you know what you’re doing, knock yourself out. This guide explains how to change the pump with step-by-step instructions.

Changing the pump yourself can save some money on labor costs. However, you should take the costs on the chin and pay a mechanic to do it if you aren’t completely sure what you’re doing. Installing the pump incorrectly can make the problems even worse.

When Should I Change the Oil Pump?

There’s no set schedule for changing an oil pump. You only need to replace the pump if it’s failing. Your oil pump should last over 100,000 miles if your engine has been well maintained.

That said, a new oil pump can fail after just a few thousand miles if you’re unlucky and have a defective part, although that is pretty rare. Don’t just change your pump because you’ve reached a certain mileage — only change it if you really need to.

A well-functioning oil pump means a happy car and a happy owner. While oil pumps don’t fail often, it does happen, especially in badly maintained vehicles or those with higher mileage.

It can be tempting to ignore the warning signs, especially when you can just turn the stereo up to drown out the weird noises coming from the engine. In all seriousness, you should get your engine looked at if you experience any of the symptoms in this article. Your car will thank you for it.