You get into your car, start the engine, and turn the wheel with one hand. The entire process is so seamless that it requires very little thought. But have you ever pondered over how the power steering in your car works? Probably not.

Advancements in technology have allowed us to manipulate a car’s steering wheel with minimal effort. That wasn’t always the case, and it’s not the case if your power steering has gone bad.

What Is Power Steering?

Before power steering arrived on the scene, steering systems were geared. This meant that it took many turns of the steering wheel to change the wheels’ direction. Steering a car required a lot more effort from the driver, especially at low speeds or when parking the vehicle.

Power steering makes turning the wheels much easier, meaning the driver expends less effort to steer. This is especially useful in larger and heavier vehicles or vehicles with large wheels.

How Does Power Steering Work? 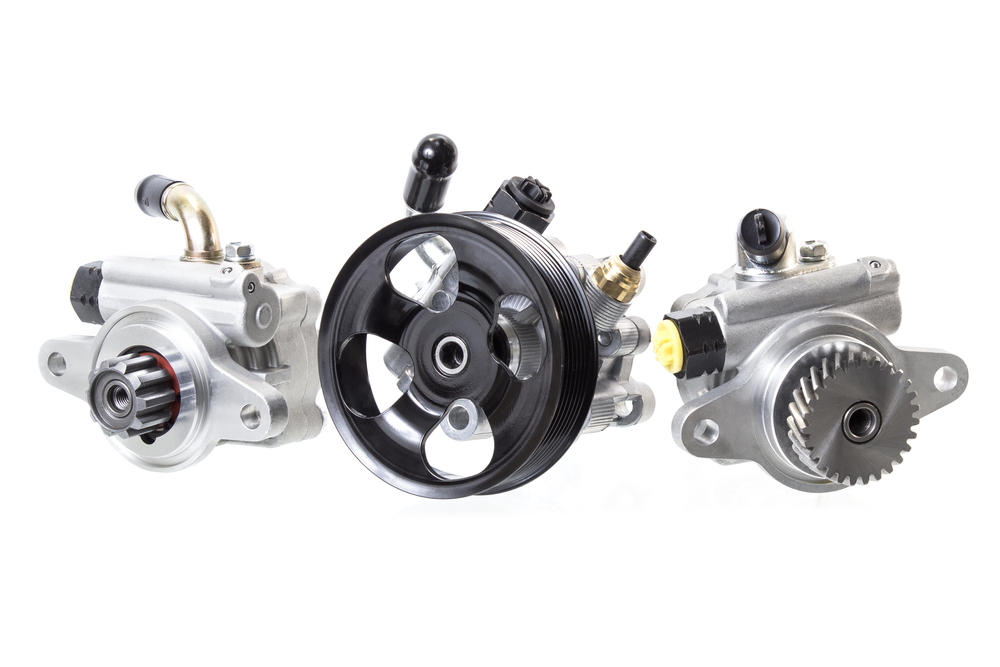 Hydraulic power steering was the first type of power steering to appear in the 1950s, and it was the standard type used until the 2000s. It uses a pump to pressurize hydraulic fluid and feed it to the steering rack, making steering much easier. The pump is driven by the engine’s serpentine belt, which also powers the air conditioning and alternator.

While hydraulic power steering was a major improvement compared to geared steering, it did come with some downsides. The pump still takes energy from the engine, even when it’s not in use, resulting in wasted energy. That translates to more fuel usage. In addition to that, the hydraulic fluid needs to be replaced periodically. It can also leak or go bad, causing other power steering components to fail.

Electric power steering is relatively new and is now used in the majority of new vehicles on the road. It does the same job as the hydraulic power steering system: making the steering lighter and easier to handle.

However, instead of a pump running off the engine, it uses an electric motor that draws energy from the vehicle’s electrical system. Sensors detect how much effort the driver is putting into turning the steering wheel, and an on-board computer calculates how much assistance is needed.

The advantage of electric power steering over hydraulic is that it doesn’t waste any energy when it’s not in use. There’s also no fluid to change, which means the whole power steering system is more durable and less prone to damage.

This system is much rarer and only be found in a select few models of heavy pickup trucks. 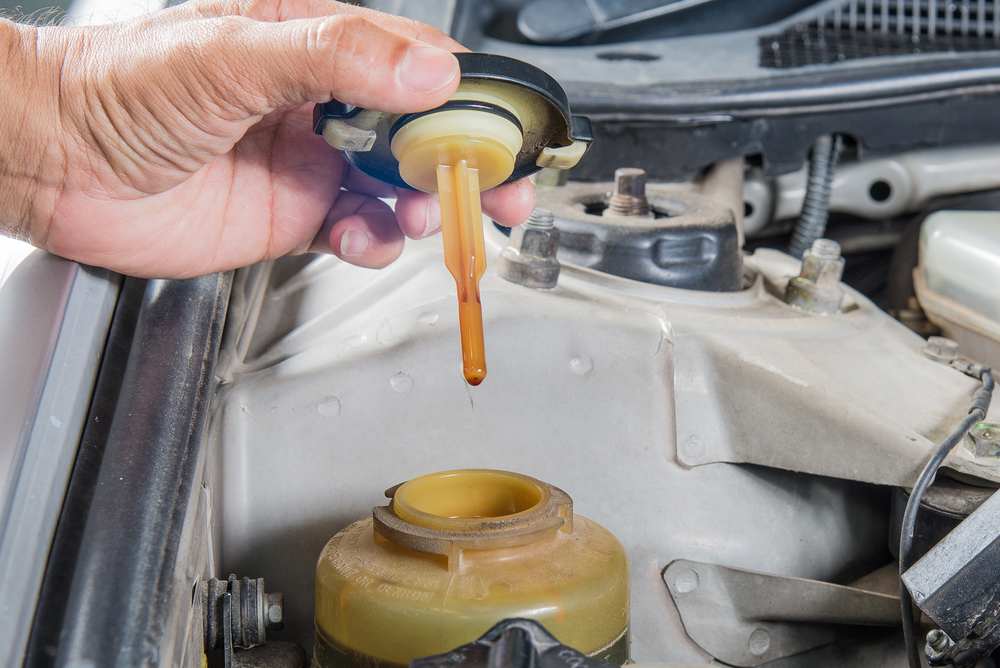 While most power steering components last for the lifetime of the vehicle, it’s not unheard of for components to fail.

Some of the symptoms listed below, like fluid leaks, will only apply to hydraulic systems. However, all three systems will suffer from a stiff steering wheel and some types of noises when they go bad.

It’s likely there’s a fluid leak somewhere if your power steering fluid level is low. Be sure to find where it’s coming from, as the fluid will continue to leak if it isn’t fixed.

Flakes in the Reservoir

While you’re checking the fluid level, it’s a good idea to check the condition of the power steering fluid. Power steering fluid should be a red-brown color; if it’s grey, it’s bad. You may also notice metal flakes in the reservoir — that’s a bad sign.

Grey-colored fluid and metal flakes indicate corrosion or wear inside of the pump. If the pump hasn’t already failed, it’s probably on its way out. The flakes are aluminum shavings from inside the pump, and they can cause the reservoir filter to become clogged, which starves the pump of fluid.

If you notice that you have fluid leaks, your fluid level will also be low. Take a look underneath your vehicle to check for any brown fluid patches on the ground. It’s also a good idea to check around the power steering pump to see whether any fluid has pooled there.

A bad pump doesn’t always cause fluid leaks, but it does indicate that something has failed in the power steering system. In many cases, it’s caused by bad seals in the steering gear or rack.

These seals are exposed on the underside of your car, meaning they get pelted with dirt and debris from the road, which wears the seals down. Seals often can’t be replaced, meaning you’ll need to replace the entire component if the seals are shot.

A bad power steering system can make several different noises, one of which is whining. Whining noises happen while turning your steering wheel. The noises may get louder at higher speeds or when the engine RPMs are higher.

The likely cause is a leaking pump or a low fluid level. If that’s the case, you might be able to get away with just topping up the fluid. However, if the pump has become damaged due to the low fluid levels, it’ll need replacing.

If it has got to the point where the system is groaning, you’ve probably damaged other steering system components. Unfortunately, that means forking out some serious cash on new parts.

It is worth pointing out that some vehicles’ power steering systems will make a brief groaning noise when the full lock is applied. This isn’t unusual. That said, you should avoid doing this when possible as it puts extra stress on the pump and can cause it to fail prematurely.

Squealing noises are usually heard when starting up the vehicle. The noises may last for a few seconds or a few minutes, but they should quieten down after a while.

This is usually caused by the serpentine belt that drives the pump. It could be loose or worn, which causes it to slip and make squealing noises. It may also be due to the belt being contaminated with fluid or worn belt tensioners.

In this case, you will probably only need to have the belt and the tensioners replaced. 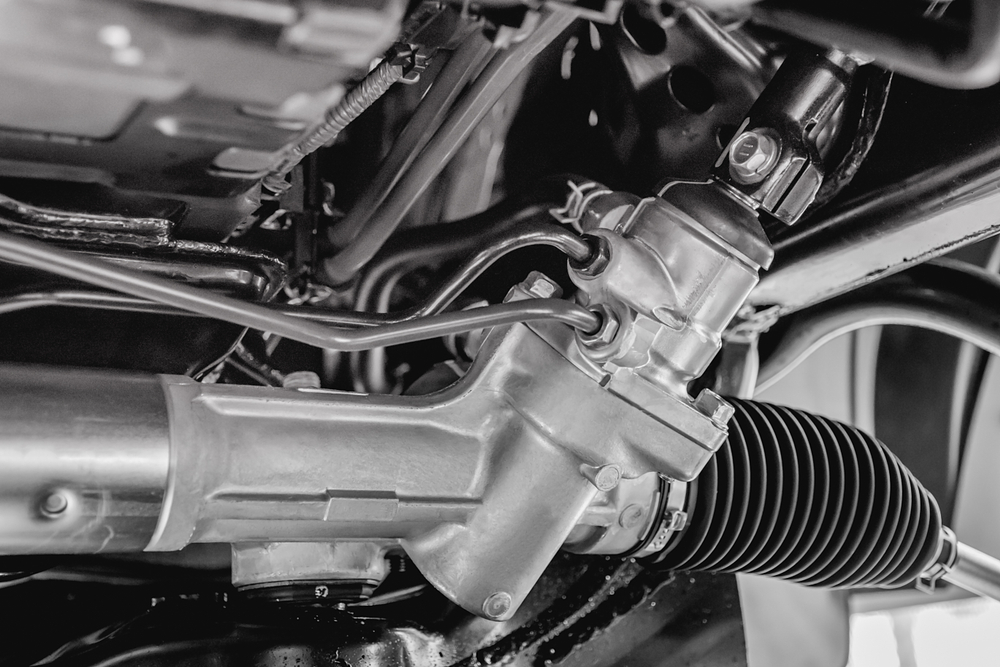 You’ll need a new pump if your old one has failed. The pump alone will cost around $100 to $200, which is pretty reasonable as far as car parts go. If you take your car to a garage to have the new part fitted, you can expect to pay around $300 for labor.

You can buy and replace the pump yourself as it isn’t the hardest job in the world, but it will require having some mechanical skills.

All in all, you’ll pay anywhere from $400 to $700 for both parts and labor. That price might be somewhat higher depending on the make, model, and year of your vehicle.

Getting a replacement steering rack is pretty expensive, although you may have the option of purchasing a cheaper remanufactured rack instead of a brand new one. A new steering rack assembly will typically cost between $350 and $800 just for the parts.

Replacing the steering rack is a pretty involved job as it requires replacing the o rings and the oil seals. You’ll also have to carry out a front wheel alignment. For those reasons, we’d recommend leaving it to the professionals.

If you’re lucky, you might only have leaking hoses, with no damage to any of the other power steering components. These hoses are made from rubber and allow hydraulic fluid to move between the reservoir, the pump, and the steering rack. Over time they can degrade, leading to leaks.

If that’s the case, you’ll only need to spend a relatively small amount of money replacing the hoses. New hoses will cost anywhere from $100 to $300, depending on the type and quantity of hoses you need. A garage will charge you somewhere in the region of $200 to replace them for a total cost of $200 to $500.

Reservoir tanks are made from plastic, and they can leak as they get older. They also contain filters to filter out any debris from the power steering fluid. As with any type of filter, they can clog over time which starves the power steering pump of fluid.

To have a new tank fitted at a garage, you’re looking at between $150 and $250. It’s a pretty messy job as it involves draining some of the power steering fluid, so we’d palm off the job to a garage.

Your serpentine belt might be worn or loose — if it is, you’ll hear squealing noises from the engine. You will probably also experience issues with your air conditioning and the alternator, as these components run off the same belt.

The belt itself costs $25 to $75, and labor costs will only set you back 100 or so bucks as replacing the belt is a one-hour job. You may also need new belt tensioners if they’re worn out. Tensioners are cheap, and a mechanic will be able to advise you on whether they need replacing or not.

Your power steering fluid will need flushing and replacing if it has become contaminated. A flush isn’t always necessary, so first check with your mechanic whether you need one.

Power steering fluid should be replaced every five years or every 50,000 miles. A garage will charge you around $150 for a flush and fluid replacement, which isn’t bad considering it’s a messy job. You could do it yourself if you know what you’re doing, but it requires draining and disposing of the old fluid.

How Long Should a Power Steering Pump Last?

There’s no set lifespan for power steering pumps. A pump may last forever, or it could die after a few thousand miles.

How long the pump lasts for all boils down to whether you’ve kept the power steering fluid in good condition and at the right level. That said, the typical lifespan of a power steering pump is around 100,000 miles.

Is It Dangerous to Drive Without Power Steering?

Besides being difficult to turn the wheel, continuing to drive with faulty power steering can cause other power steering components to become damaged, which will cost more money to fix. We wouldn’t recommend driving if your power steering has failed — get it fixed.

Can I Add Power Steering Fluid Myself?

Also, be sure to use the right type of fluid recommended by your vehicle manufacturer; this may be regular power steering fluid or automatic transmission fluid.

Car steering systems have come a long way since the days of stiff, non-powered steering. It’s a luxury to have effortless steering in your car — that is until it goes bad.

Bad power steering isn’t an immediate danger to you or your vehicle, but it can cause more damage if left unfixed. It’s also difficult to drive without it, so you’ll want to get the issue diagnosed and the parts replaced sooner rather than later.