You probably don’t think about your car’s flywheel too much. That’s not surprising; it’s a component that’s hidden deep within the transmission, and it rarely causes trouble.

While the flywheel is generally well-behaved, things can go wrong with it. As you’ll learn from this article, the flywheel is a critical component that allows your car to move. Many serious issues can arise if it goes bad — you’ll want to get it fixed before even bigger and more costly problems appear.

This article covers everything you could ever want to know about flywheels, including what they are, the main symptoms of a bad flywheel, and how much it costs to replace it. While flexplates are similar to flywheels, this article will focus solely on flywheels found in manual transmission vehicles.

Everything You Need to Know About Flywheels

You should read this section if you don’t know anything about flywheels. We’ll explain what they are, what they do, and how they get damaged. You can skip to the symptoms or the replacement costs sections if you’re already clued up on the subject. 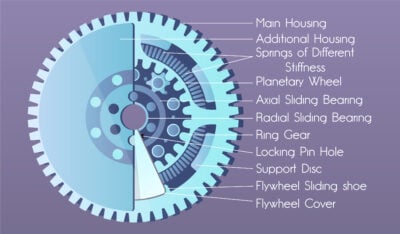 In short, a flywheel is a metal disc that’s usually made from cast-iron, steel, or in some cases, aluminum. The flywheel fits on the engine’s crankshaft and sits between the engine and the transmission.

Without a flywheel, your car wouldn’t move anywhere. The flywheel is a crucial component that does many different things, as you’ll see in the next section.

A single or solid mass flywheel is made from a single piece of metal with no moving parts, providing a direct connection between the clutch and the transmission. In addition to being light, it allows the engine to rev easier. They’re also more resistant to heat and warping, meaning they’re more durable than their dual-mass counterparts.

It’s not all sunshine and rainbows, though. Single-mass flywheels are noisier than dual-mass flywheels, and they are also more prone to vibrations that can be felt in the gearbox.

A dual-mass flywheel has two flywheels; one fitted to the crankshaft, the other to the clutch. They’re often used in larger vehicles, like diesel trucks, as they use high tensile springs that act as a sponge to absorb torsional spikes from engine vibrations. This protects the gearbox from damage caused by excessive vibrations.

These benefits come at a cost; dual-mass flywheels are more expensive and more complex than their lighter single mass brothers. They can’t be resurfaced, so they must be replaced when they go bad. They’re also more prone to heat damage and warping, making them less durable and more likely to need replacing sooner than a single mass flywheel.

What Does a Flywheel Do?

A flywheel’s primary purpose is to allow the engine’s power to transfer from the crankshaft to the transmission, where it reaches the driveshaft and turns the wheels. However, there’s more to a flywheel than just power transfer.

What Causes a Flywheel Damage? 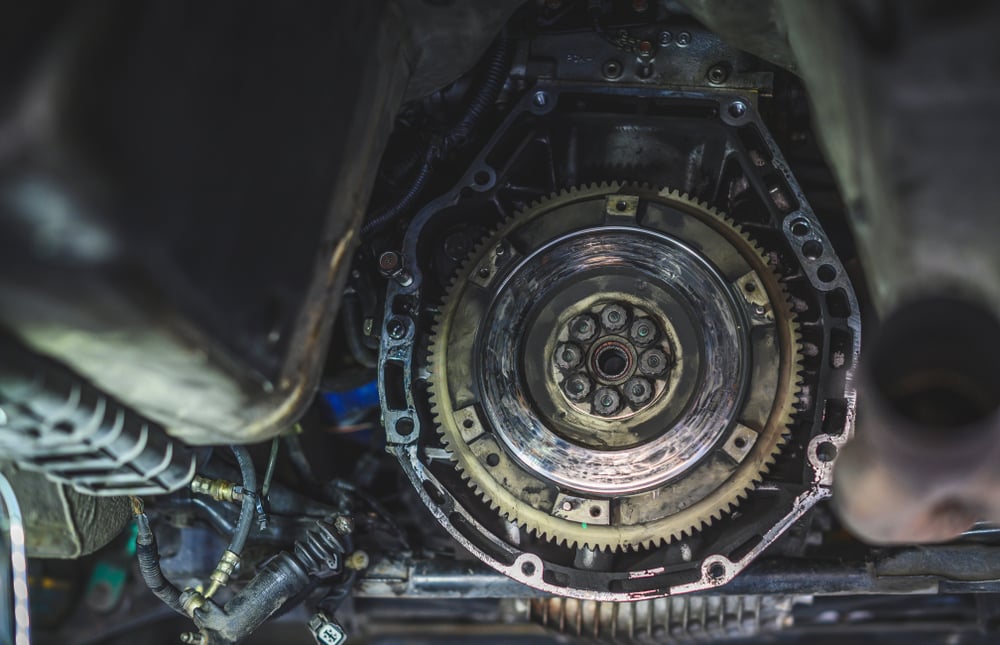 Flywheels are pretty basic and less complicated than many other parts of an engine, so why do they go bad? The most commons reasons include:

Symptoms of a Bad Flywheel 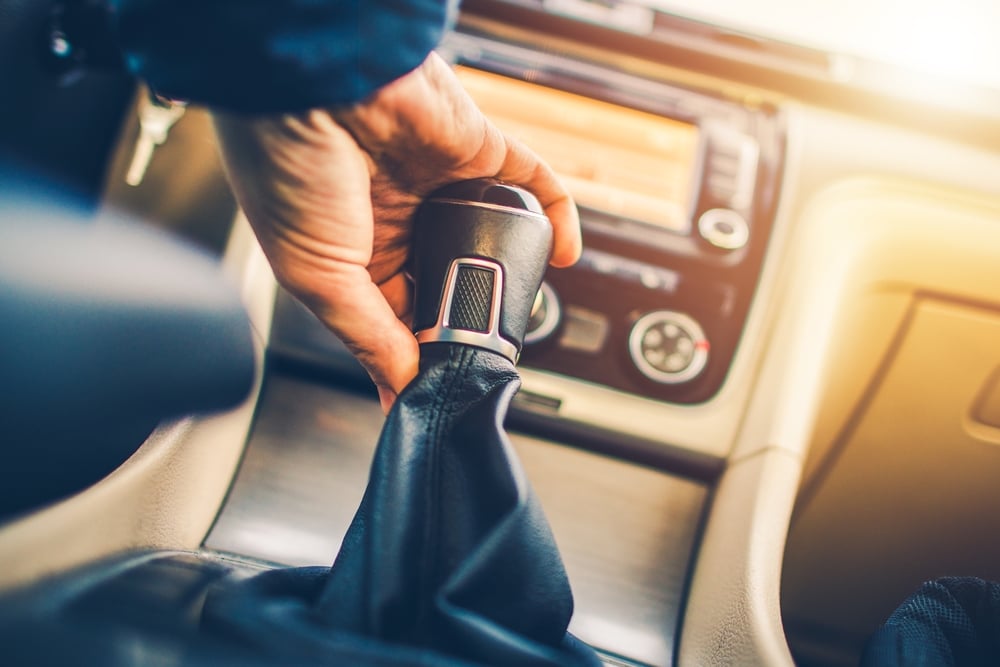 There are several symptoms of a bad flywheel, which we’ve listed below. You should note that these symptoms aren’t always a sign of something wrong with the flywheel; they can also indicate there’s an issue with the clutch or another transmission component.

If you hit the gas and your RPMs increase rapidly, but your car doesn’t accelerate, you have clutch slippage. This means the engine is working, but no power is being transferred to the driveshaft and thus the wheels. This is most noticeable when driving in higher gears.

A bad clutch usually causes clutch slippage. However, if left unfixed, it can cause the flywheel to wear. The excessive friction overheats the flywheel, resulting in warping and cracking. Slippage may also be caused by leaking oil or fluids onto the clutch and the flywheel.

There shouldn’t be any burning smells from your car, period. You may have a burning clutch or a flywheel issue if you can smell an acrid burning coming from the front of your car. The smell is much different from the smell of burning gas or oil, so it’s easy to identify.

The burning is normally caused by riding the clutch or if the flywheel is shot. It’ll start to burn once it gets too hot, which is a sign that the flywheel may be warping from the excessive heat. If it’s got to the point where it’s burning, you’ll probably need to replace more than just the flywheel.

Can you hear a rattling or chattering coming from the engine? That’s clutch chatter. Clutch chatter usually happens when releasing the clutch to change gear. You’ll feel and hear the rattling from the driver’s seat as it’s fairly loud. Your car might also stall if the flywheel has gone bad.

Clutch chatter mostly happens when driving at slow speeds, for example, when coming to a stop at traffic lights. It’s usually caused by a loose flywheel, faulty thrust bearing, or another clutch component. It isn’t always indicative of a bad flywheel, so be sure to check for other symptoms to confirm what’s causing the chatter.

Vibrations from the clutch pedal are linked to clutch chatter. You may feel a vibration or pulsating when resting your foot on the clutch pedal. This symptom is most noticeable when idling, but you might also feel it when driving if it’s caused by the flywheel.

As we’ve learned, the flywheel helps with the engine starting as it has small teeth, which the starter motor connects to in order to start the engine. You may experience problems with starting the engine if the flywheel is bad.

If your car doesn’t start at all, it may be down to a completely failed clutch or a faulty clutch master cylinder, in which case it’ll need replacing.

An unbalanced flywheel that’s loose will cause excessive vibrations through the car and the engine. This is more common with dual mass flywheels as they’re heavier and store more energy than single mass flywheels.

A loose flywheel is very dangerous; it stores a lot of kinetic energy, which can cause severe damage to your car if it breaks loose or disintegrates. If that happens, you may need to replace a lot more than the flywheel — it can ruin the transmission housing, the engine, and other expensive to replace components. 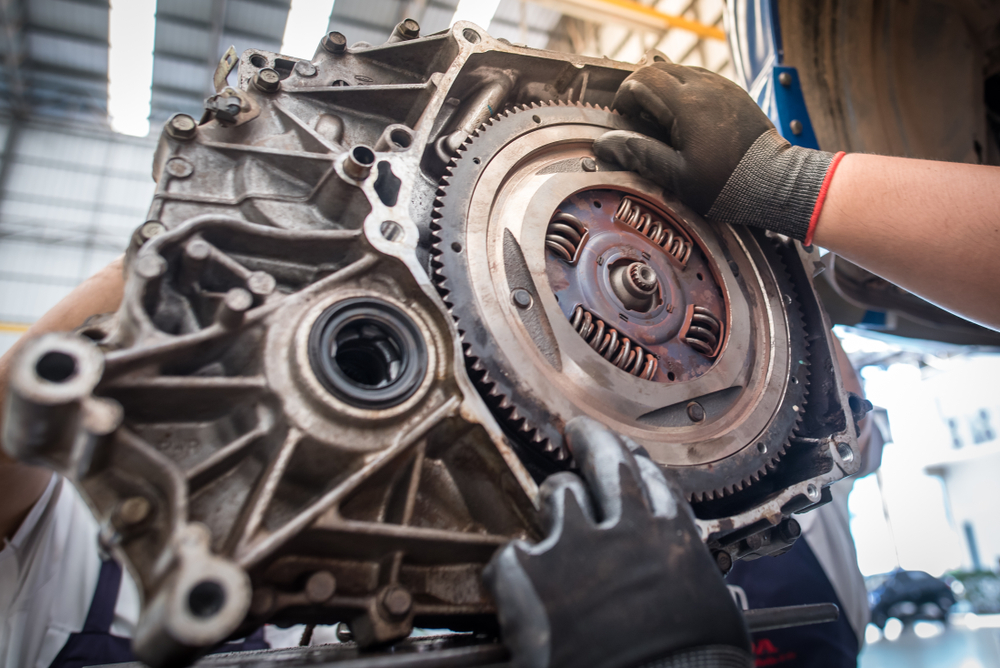 So, how much is it going to cost to replace the flywheel? Well, that depends on several factors, such as your vehicle’s make, if you replace it yourself, and whether you need a single or dual mass flywheel.

You should also consider the costs of other clutch components. In addition to having a bad flywheel, your clutch and associated components may be failing or completely dead.

You can expect to pay anywhere from $500 up to $1,500 or more for a replacement flywheel. That includes labor and parts. You should factor in the costs of additional components if they’re needed.

If you have a single mass flywheel, you may get away with having it repaired if it isn’t too badly damaged. Unfortunately, you’ll need to visually inspect it to determine whether it’s repairable — a mechanic will be able to advise you on your options after looking at it.

Good quality parts usually come with some sort of warranty. It’s common for the warranty to last for three years or 36,000 miles, giving you peace of mind should something go wrong before then.

Quick Answers to Your Questions

We’re not mind readers, but we’ve answered some of the most common questions about flywheels below.

Can You Replace a Flywheel Yourself?

You can replace a flywheel yourself if you’re experienced with cars. That said, it’s a more complex job than just changing an air filter or spark plugs.

If you’re not confident in your mechanical abilities, we’d recommend paying a garage to repair or replace the flywheel for you.

How Long Should a Flywheel Last Before It Needs Replacing?

A flywheel should last for around 100,000 miles before it needs replacing. That figure can be a lot higher or lower, depending on how you drive your car.

It’s not unheard of for flywheels to last for 150,000+ miles if looked after. On the flip side, the flywheel may fail at 20,000 miles if it has been badly abused.

Should I Keep Driving With a Bad Flywheel?

Whether you can keep driving with a bad flywheel depends on how far gone it is. In some instances, you won’t even be able to start your vehicle, which means you won’t be driving anywhere in a hurry.

In other situations, your car might just be making odd noises and vibrating. If that’s the case, it will be drivable, but that doesn’t mean you should be driving.

A bad flywheel won’t get better on its own. In fact, it’ll only get worse the more you drive, and that could cost you more money in the long run if it causes damage to other components.

No matter which way you look at it, the flywheel is an important part of your car. Without it, your wheels wouldn’t turn, and your engine would run rough.

Get your car looked at by a mechanic sooner rather than later if you notice any of the symptoms listed in this article. Failing to do so will result in the problem getting worse, and your car may become undrivable.