Home › Knowledge Base › Car Wandering? Your Control Arm Bushings Might Be Bad

No matter what car you drive, you want to be the one in control. Sometimes, though, it will seem like a car will develop a mind of its own and start going in directions that you didn’t tell it to go in. Not only does that make for an uncomfortable ride, but it can be downright dangerous. The good news is that your car probably isn’t possessed; it just needs new bushings.

In this article, we will talk about the symptoms of a bad control arm bushing, what they do, and how you can fix them. Hopefully, we can get you comfortably back on the road as soon as possible.

There are four main symptoms of a failing control arm. Since the control arm is a purely mechanical part, most cars do not have any sensors that can monitor its performance. That means that you won’t get a check engine light or other warnings; you will have to rely on feeling and intuition.

Unusual noises are almost always a sign that something is wrong with your car. When bushings fail, they create a place where metal can clank against metal. You’ll hear that sharp, metallic sound every time you turn or go over a bump.

In more extreme cases, you may hear rattling while you drive down the road. It will sound a lot like a loose bolt being shaken in a metal container. That’s because that’s pretty much exactly what’s happening. The bolt is tightened against the bushing, so if the bushing goes away, it has a lot of room to move around and make a ton of noise.

Your steering feel will probably be the largest indicator of a bushing failure. When the bushings fail, your car will sometimes move around when it shouldn’t. The bushings add rigidity to the steering, and without them, the parts can fall to one side or the other. That translates to the steering, which you will feel through the steering wheel and as lateral motion.

The most common type of unusual steering feel is known as “wondering.” That’s when your car seems to have a mind of its own and wants to turn back and forth while you try to drive straight.

Under normal conditions, cars are pretty smooth on the road. There is a lot of technology and design that went into your suspension, and it can handle pretty much anything. The bushings are part of that design, though, so when they fail, the whole system doesn’t work as well.

That usually translates to excessive vibration that you’ll feel in the cabin. Normally, small bumps on the road don’t get passed to you through the car. You’ll feel every little bump or imperfection with a bad bushing, though.

This symptom may take you a while to notice, and unfortunately, it’s the most costly damage that can occur. Your tires rely on a properly adjusted toe angle and camber angle in order to wear evenly. A broken bushing will make it impossible to properly align the tires, though, so they will wear unevenly.

The most common wear issues appear as excessive wear on the inside of the tire. The tread closest to the center of the vehicle will be a lot shallower than the tread towards the outside. The problem gets worse exponentially over time, so it’s not uncommon to have relatively new tires that are bald on the inside.

When the bushings are first starting to fail, it’s not very dangerous to continue driving. You just might have to put up with the occasional funny noise. Even when they have really started to get bad, most people can handle the lack of handling.

The problem will get worse over time, though, and eventually you’ll be fighting with the car to remain in control. That presents a huge safety issue for you and others on the road. Even if you don’t hit another car when your car suddenly swerves into traffic, the mental strain is painful enough.

What Are Control Arm Bushings? 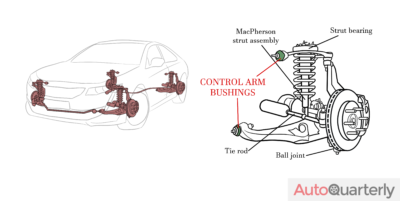 The bushings themselves are located between the frame or other structural members and the control arm itself. If you look under your car, you’ll notice a wishbone-shaped piece of metal connected to the wheel hub. That’s the lower control arm. If you look at where the control arm attaches, you’ll see bolts that go through a rubber spacer. That spacer is the bushing.

Every control arm has at least two bushings, so your car has a minimum of eight, two per corner. Some cars have upwards of sixteen different control arm bushings. It’s good to take a quick count because you should replace bushings as left and right sets to maintain even tire contact.

What Causes Bushings to Fail?

Age is the primary destroyer of bushings. The rubber or polymer simply wears out over time. There are some things that can cause them to fail faster, though. Anything that puts more strain on the suspension will damage the bushings.

Things that cause extra strain include:

If you have any of those upgrades on your car, or are running aftermarket suspension in general, you should consider upgrading the bushings. The stock rubber bushings are fine for everyday driving, but stiffer polyurethane bushings can improve handling feel and longevity. Motor Magazine has an excellent article about bushing upgrades here if you are considering that route. 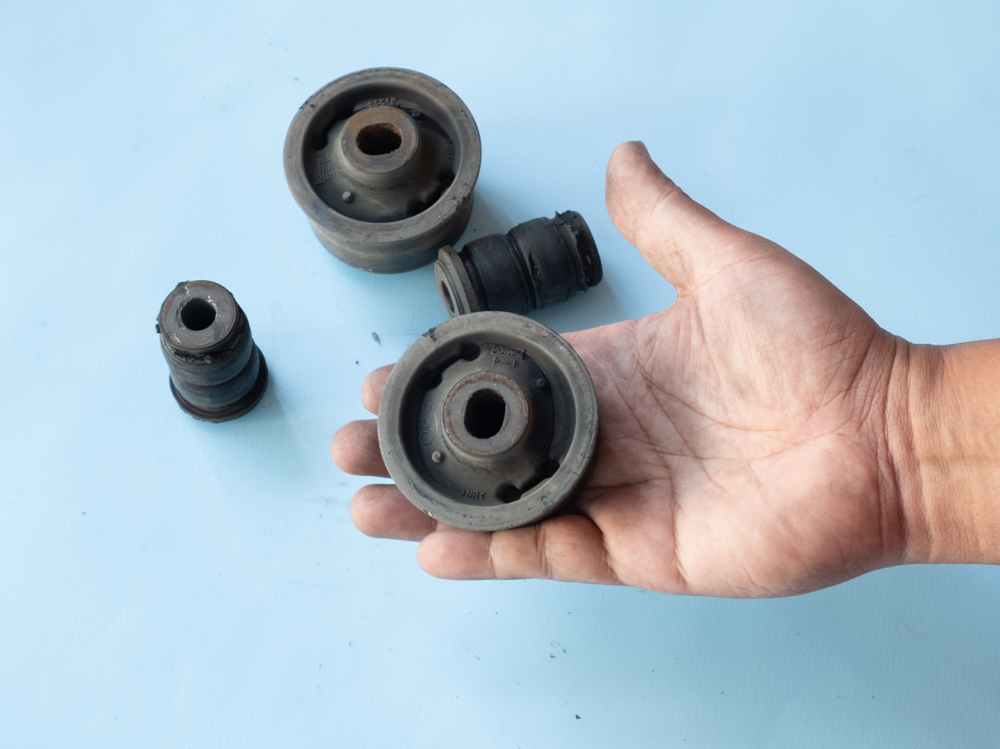 When bushings fail, replacement is pretty much the only option. There’s nothing that can fix a worn out-chunk of rubber. If you are in the unfortunate situation that you need new bushings, you have a couple of options.

The first is to do it yourself. It will require a jack, jack stands, and a variety of hand tools. It is something that a home mechanic can do; it just requires a lot of space and planning. You can also take the car to a shop and have them do it. Most tire stores can perform minor suspension work like this, and they will sometimes be able to do it at a discount if you are also buying tires from them.

Control arm bushings are not often expensive. For instance, this bushing for a 2005 Camry is widely available at a variety of price points. Just remember that you will need two of them. Since the part itself is inexpensive, most of the money you will save by doing it yourself is in labor.

Replacing a bushing takes a fair bit of grunt work, so be prepared to dedicate an afternoon to the task.

If you can get someone to help you, it can make the process much faster. They can hold the arm in place while you slide the new bolts in.

The process does vary considerably from car to car, so it’s best to check the internet or your service manual before proceeding. The general steps are as follows.

The most important thing to do is work methodically and carefully. There are some suspension components that are very easy to install upside down, and doing so will ruin your driving experience. Label things, and if you can, take photographs as you do things. You should be back on the road in no time.

Having a Mechanic Perform the Work

Unfortunately, the cost can vary wildly. A car with a simple Macpherson strut suspension that has easy to find bushings may cost as little as $300. That’s about $100 in parts and two hours of shop time.

A car with double wishbone suspension and high-quality bushings, though, can cost as much as $700. It’s always a good idea to get multiple quotes from different mechanics in this situation. One shop may be much better suited for suspension work and be able to charge less money.

The benefits of replacing bigger chunks of the suspension are mostly related to peace of mind. By replacing more, you know that it won’t fail in the future. It will also improve the handling of your car. Older cars especially have a lot of worn-out bushings and parts. Replacing them will make it feel like new.

Don’t Be a Victim of Wandering Wheels

Letting your mind wander on a sunny afternoon under a tree is a wonderful thing. Letting your car wander while driving down the highway is terrifying and not recommended. We hope this article inspires you to take action and get any suspension issues you are having fixed. That way, you can focus on enjoying the drive.