Your car is a resilient piece of machinery. It can operate in the blistering cold and the scorching heat, all without breaking a sweat. This is all thanks to its cooling system.

There can be negative consequences if something goes wrong with your car’s cooling system. One component that often goes bad is the coolant temperature sensor.

Don’t know anything about the coolant temperature sensor? No worries. We’ll run through everything you need to know, including what it is, the symptoms of a faulty sensor, and the replacement costs. We’ll also cover the five most common fault codes to look out for.

What Is a Coolant Temperature Sensor?

A coolant temperature sensor is a small sensor located in the engine bay. Its job is to keep an eye on the temperature of the coolant inside your engine. It does this to see whether the coolant is too hot or too cold, and it reports back to the engine control unit (ECU) with this data.

Thanks to this critical sensor, your ECU will be able to see whether the engine is running too hot, too cold, or just right. The ECU will log a fault code and trigger the check engine light (CEL) on your dashboard if something is wrong with the temperature.

Unfortunately, these sensors fail with age. The ECU will receive the wrong temperature reading – too hot or too cold – if the coolant temperature sensor has failed. This can damage the engine if the sensor thinks that the engine is running cool when in fact, it’s actually overheating. 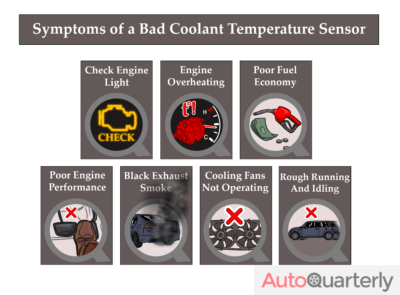 Let’s take a look at some of the common symptoms you can expect to see when your car’s coolant temperature sensor has failed.

When anything goes wrong with your car, the check engine light will likely come on. This happens because your car’s ECU receives lots of data from many different sensors. The ECU will log a fault code and trigger the CEL warning light when it detects that something isn’t right.

When the coolant temp sensor fails, it may tell the ECU that the coolant is either too hot or too cold. In addition to causing some of the other symptoms listed below, the incorrect reading itself can cause a CEL to appear.

This has been designed so that you know when something is wrong with your engine, even if there aren’t any physical symptoms yet. To see why the light is on, you’ll need to use an on-board diagnostics fault code scanner to check which fault codes have been logged. A mechanic can also do this for you at a garage.

A bad coolant temp sensor can cause the engine temperature readings to be either too high or too low.

In the first case, the engine temperature might actually be too cool or just right, but the sensor tells the ECU the engine is overheating. You’ll see this reflected in the dashboard temperature gauge.

In the second case, the engine might actually be too hot and overheating. If the sensor is bad, it may tell the ECU that the engine is running cool or that everything’s just fine.

Both scenarios aren’t good, as driving a car with an overheating engine can cause catastrophic damage that will cost thousands of dollars to repair.

Regardless of whether the engine is really overheating, you should stop driving immediately if the temperature gauge on the dashboard is past the halfway point or reading in the red.

An overheating engine may also trigger a check engine light and cause the car performance to suffer. If the engine is genuinely overheating, you may also see steam coming from the radiator.

The internal combustion process has to happen correctly for your engine to run optimally. Complete combustion boils down to the right amount of air and fuel in the cylinders. This is known as the air-fuel ratio. The correct air-fuel ratio for all combustion engines is around 14.7 parts air to 1 part fuel.

To achieve the correct ratio, the ECU needs accurate data about the engine’s operating conditions. The air-fuel ratio can be thrown off if any sensors report inaccurate data, including the coolant temperature sensor.

If the coolant temp sensor is faulty and it tells the ECU that the engine is running colder than it actually is, more fuel will be injected into the cylinders. This is known as running rich.

A rich running engine will use more fuel, some of which won’t combust. This results in fuel being wasted as it’s expelled via the exhaust. Not only is this worse for the environment, but your fuel economy will also suffer, and your money will literally go up in smoke. Running rich will also lead to fried piston rings and carbon deposits in your cylinders if your vehicle isn’t designed to run that way.

Your engine will run lean if there’s not enough fuel being injected into the cylinders. This can happen when the coolant temp sensor tells the ECU the engine is running hotter than it actually is.

The ECU will tell the injectors to inject less fuel, which causes lean running conditions. While this does use less fuel, it means that engine performance will suffer. You may notice that your car struggles to accelerate if this happens.

Black exhaust smoke ties in with the previous points; if the coolant temperature sensor is bad and your car’s running rich, excess fuel will exit your engine via the exhaust. The richer the engine is running, the greater the amount of black smoke you’ll see from the exhaust.

Black smoke is more common with diesel engines than gasoline engines. While a small amount of black smoke isn’t a huge deal, a large amount is more serious and will need to be looked at sooner rather than later. The black smoke is unburned fuel — not only is it bad for emissions, but it’s also your money being thrown away!

Most cars have one or two cooling fans at the front of the engine. These fans are designed to cool down the engine and the radiator when your car is stationary, as they’re normally cooled down via the ambient air hitting the front of your vehicle when driving.

When stationary, there is no cool airflow to the engine and the radiator (unless you’re in a cold climate). Once the engine is hot enough, the fans will kick in to cool down the engine. If the coolant temp sensor is faulty, the fans might not kick in, even if the engine is running too hot.

It’s worth noting that the fans don’t always run — they only come on when the engine is up to temperature, and you’re idling. If the engine isn’t hot enough, or if it’s cool outside, the fans may not kick in or only kick in intermittently.

Rough engine running and rough idling are both symptoms you can experience when the coolant temperature sensor is kaput. You may also experience hesitation when accelerating, and your car may stall while idling.

This is more common in vehicles fitted with exhaust gas recirculation (EGR) valves, as the valve shouldn’t be open and recirculating exhaust gasses when the engine is cold. This might happen if the engine is actually cold, but the temp sensor tells the ECU it’s up to temperature or too hot. 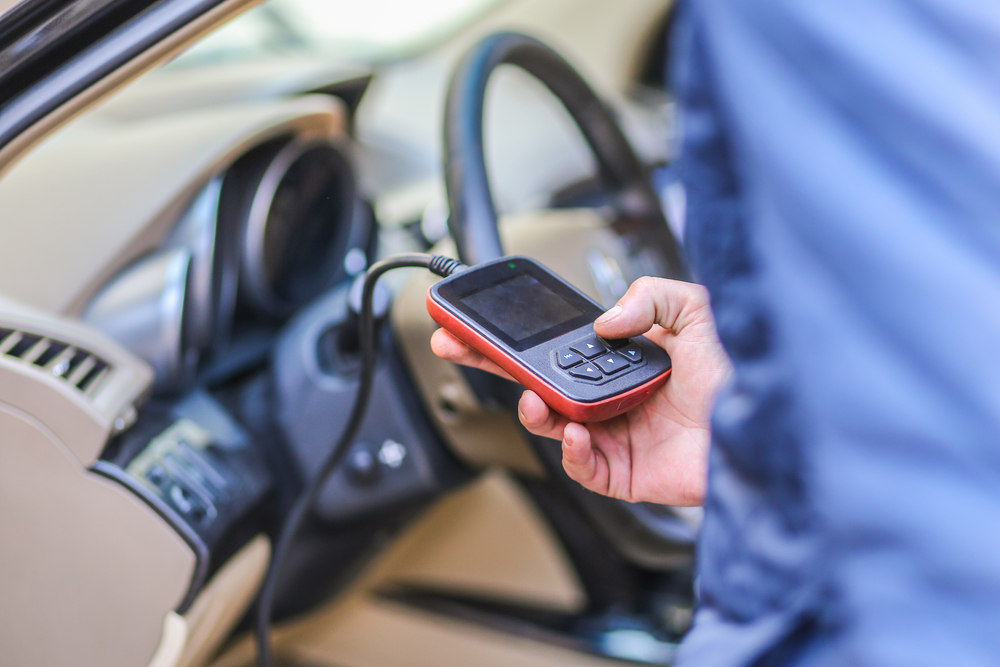 You can plug an OBD scanner into your car to check for any logged fault codes. You can expect there to be some fault codes present if your check engine light is on.

Below are five codes related to a faulty coolant temperature sensor:

If any of these codes are present, you likely have a faulty coolant temperature sensor. If that’s the case, the sensor will need to be replaced, which we will cover in the next sections.

Your coolant temperature sensor only needs to be replaced if it has failed. It’s not an item that needs to be regularly replaced during routine servicing, so don’t change it for the sake of it.

The cost of the sensor is around $25 to $50, depending on your vehicle. Labor costs vary but will typically add $150 to $300 to the replacement costs, although this could be significantly more if additional work needs to be done, like changing the thermostat or performing a coolant flush. If you do go down the DIY route, you’ll need to buy some fresh coolant to top off the radiator with.

It’s worth mentioning that some vehicles have two coolant temperature sensors: one that reports the engine temperature to the ECU and another that reports from the ECU back to the dashboard. This isn’t common in modern cars, but you may need to replace both of them if your car has two sensors.

Can I Replace the Coolant Temp Sensor Myself?

Replacing a coolant temp sensor yourself is relatively easy — you don’t need many tools to do it. The job itself essentially involves draining a small amount of coolant from the engine, disconnecting and removing the old sensor, screwing in and reconnecting the new sensor, and topping off the coolant level. This video details the process step by step.

If you’d prefer to avoid getting your hands dirty, you can take your car to a mechanic, where they’ll do all of this for you.

Where Is the Coolant Temp Sensor Located?

The location of your car’s coolant temp sensor will depend on your vehicle’s make; different cars have them in different places. Typically, these sensors are located close to the cooling system, so be sure to check behind the coolant hoses, under the air intake hoses, or on the engine block itself.

Your engine is designed to operate at a certain temperature for it to run optimally. As we’ve seen, a faulty coolant temperature sensor can throw off the ECU, even if the engine temperature is normal. This results in several symptoms that impact your car’s fuel economy and performance.