Another day, another car problem to diagnose. If you’re here, you’re either desperately searching for any hint as to why your vehicle is acting up or you have a sneaking suspicion that you are looking to confirm. Today, we’re going to cover everything you need to know about arguably one of the most important parts of your vehicle’s engine: the timing belt.

Before we get into the nitty, gritty, and oily job of figuring out if something is up with your timing belt, let’s first cover the basics to get everyone on the same page.

What Is a Timing Belt and What Does It Do? 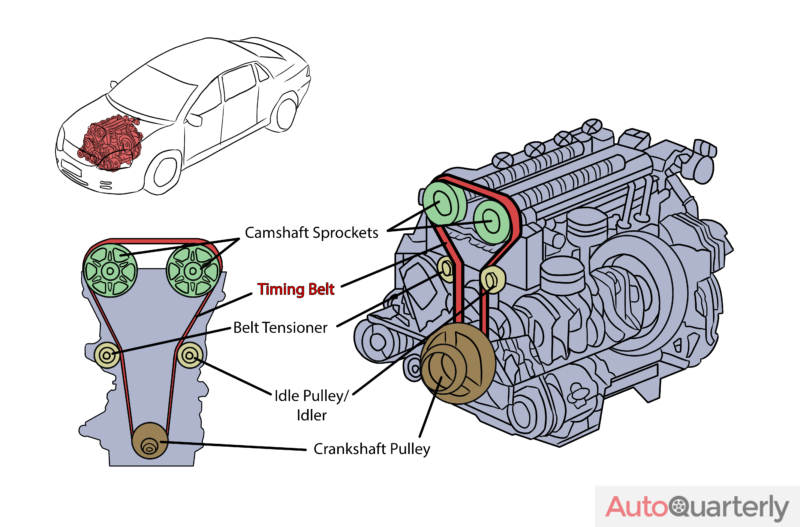 The timing belt synchronizes the action of pistons and valves within the engine so that fuel and air can flow through the system, keeping the engine running smoothly. The alternator belt, on the other hand, is responsible for charging your battery and keeping your electrical components such as headlights, air conditioning, and various accessories running.

The timing belt itself tends to be a circle of rubber with regularly spaced teeth on the inner side of the belt. Sometimes timing chains made out of metal are used instead of rubber belts, but these are more expensive and less common. Either way, the timing belt system employs an array of sprockets, pulleys, and tensioner(s) regardless of the type of belt it uses.

The timing belt system plays an integral role in the operation of your vehicle and it, along with its various components, undergoes a lot of stress as the belt zips around and keeps your engine humming. The belt or any one of its components within the system can wear out, loosen, or fail for various reasons. But it can be hard to diagnose exactly which piece of the timing puzzle is having issues. 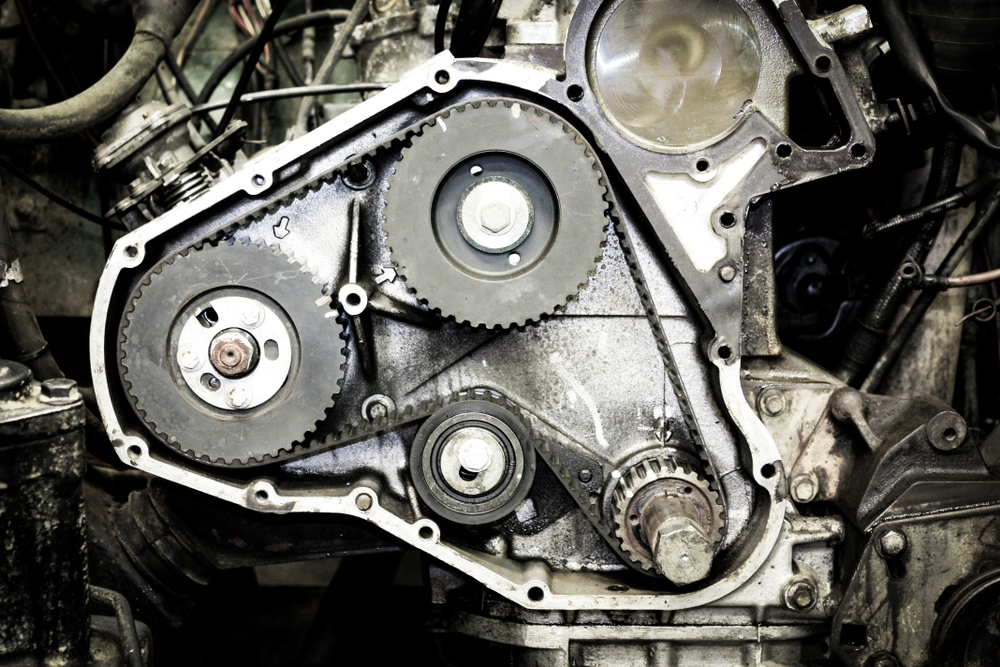 The best way to diagnose engine trouble is through the process of elimination. But that process can be guided and shortened drastically by looking for some key symptoms that point towards an issue with your timing belt and its components.

One of the best diagnostic tools humanity has in our toolkit are the ears we have bolted onto the sides of our heads. There are so many different types of car problems that can occur, and many of them produce rather unique sounds that a trained ear can learn to read.

For loose timing belts, the most common sounds you may notice are knocking, slapping, grinding, squeaking, and/or chirping. Let’s dive a little deeper into the different sounds a faulty timing belt can make.

If your timing belt is loose, there’s a good chance that it will start to wobble and slap or knock against the components near it and its housing when it’s spinning. This noise may be regular or irregular as the belt’s lack of proper tension can cause it to bang around somewhat erratically.

A loose timing belt or one with teeth that are wearing out or missing altogether may rattle, grind, or squeak as it spins because it doesn’t have a firm grip on the pulleys it’s wrapped around. The teeth may slip and recatch, causing noises.

A loud and regular high-pitched chirp is a telltale sign of a belt issue. The chirping sound can be caused by the belt itself or by the tensioner or pulleys having too much play. The presence of grit or improper lubrication can also cause chirping sounds in the sprockets as they spin. Similarly, rattling or banging sounds can come from a loose or faulty tensioner or sprocket.

Cars make a lot of noises during regular operation. But if you pay close attention to the sounds your vehicle makes, you will notice when it starts sounding different. And the specific sounds it makes can help lead you straight to the issue it’s having if you know what to listen and look for.

A loose timing belt can often cause the check engine light to turn on and throw a valve timing code. If your engine light is on, the easiest way to figure out what’s wrong with your vehicle is by breaking out an OBD2 code reader to see what the car’s computer is trying to tell you. This inexpensive OBDII reader has a built-in display and works like a charm, making it an easy recommendation.

As we mentioned, the timing belt is responsible for maintaining the proper synchronization of your engine’s pistons and valves to keep air and fuel flowing evenly through the system. If the timing isn’t properly maintained, your engine may misfire or fail to start altogether. A timing belt that isn’t functioning correctly can cause severe damage or even destroy your engine altogether, making it a serious issue that should not go unresolved.

Timing belts are integral to the operation of your vehicle and must be maintained in proper working order lest you risk severely damaging your engine. Timing belts typically become loose because of an issue with the timing belt tensioner or due to the belt stretching as it wears out.

Timing belts and their components are fairly cheap with the belt itself costing roughly $20-$50. However, the timing belt is an internal component of your engine that can not be accessed without first digging into the mess of hoses, wires, and various covers found in modern engine bays. With that said, the process of gaining access to your vehicle’s timing belt could easily take over an hour by an experienced professional with all the proper tools on hand.

The process of replacing a timing belt isn’t for the faint of heart, but here’s a great step-by-step guide from the pros at Popular Mechanics. Most people don’t have the knowledge, skills, tools, time, or desire to fix their car themselves. For everyone who isn’t a competent mechanic, the cost of the job is what matters most. 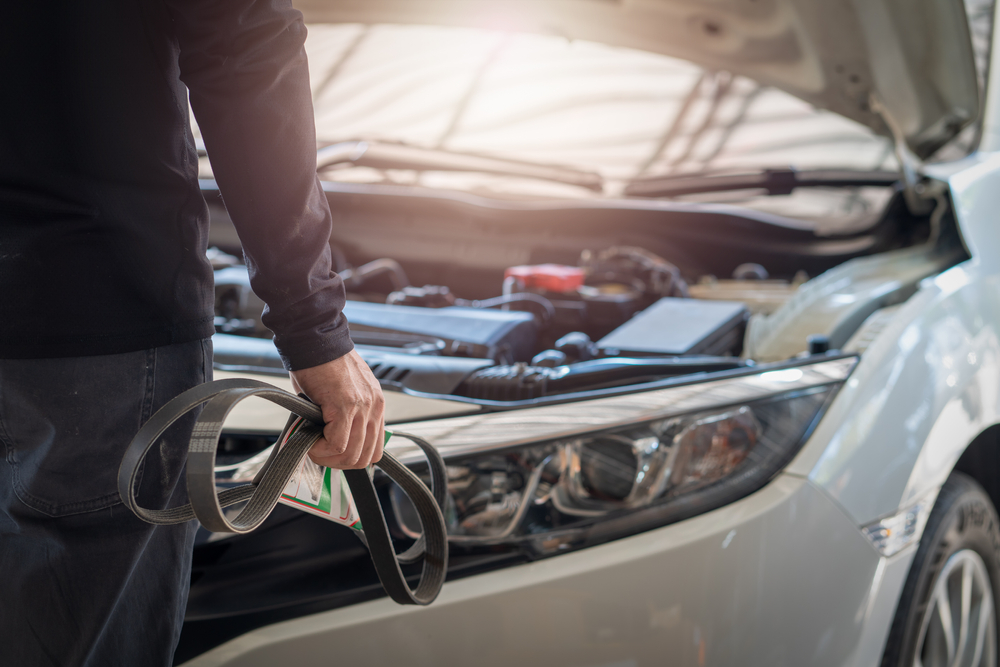 The main components of a timing belt system are fairly inexpensive. A brand new belt, tensioner, and pulleys should only cost around $120-$200. However, replacing all those components can take a fair bit of time due to how long it takes to gain access to the timing belt’s housing and put everything back together once it’s done.

That said, replacing a timing belt and its components should take a professional mechanic roughly 4 to 6 hours. Mechanic shops generally charge anywhere from $40 to $200 per hour of labor, with $80 per hour being fairly standard for most generalist shops. Luxury vehicle mechanics tend to charge on the upper end of hourly rates.

This brings the total cost of fixing a timing belt issue to somewhere in the neighborhood of $400 to $600 for non-luxury vehicles and upwards of $1,500 for custom and luxury vehicles. This cost is assuming that your timing belt is getting replaced before it causes damage to the rest of the engine. A timing belt that goes ignored can end up costing you far more money in the long run.

How Often Should Timing Belts Be Replaced?

Timing belts are designed to last the lifetime of the vehicle with some vehicles managing to operate successfully for over 200,000 miles on the same belt. However, there are a large number of factors and conditions that can impact the life of your timing belt. Most manufacturers recommend that you replace your timing belt every 60,000 to 100,000 miles. Your vehicle owner’s manual should give you the exact number recommended for your specific model.

A faulty timing belt can present a danger to you and other drivers on the road if it catastrophically fails while you’re at speed. Due to this and the fact that a faulty timing belt can cause severe damage to your vehicle, you should always adhere to the safety and maintenance guidelines in your owner’s manual. Preventative maintenance is always cheaper and safer for you and everyone else on the road.

Hopefully, this article helped you confirm the diagnosis on your car, or at least eliminate one of the possibilities. If you still aren’t sure what’s going on with your vehicle, try using the search function at the top of the page and typing in the specific symptoms you’ve encountered.

Good luck with your vehicle maintenance journey and stay safe out there.