At some point, we’ve all heard the loud, high-pitched sounds associated with a loose alternator belt, whether it comes from our car or someone else’s. A loose alternator belt has the potential to cause a wide range of issues in your car, so if you think you may be experiencing this issue, you should take action as soon as possible.

What Is an Alternator Belt and Why Is It Important?

The alternator belt can also be referred to as the serpentine belt or the drive belt. It shouldn’t, however, be confused with the timing belt.

The alternator belt connects your alternator, power steering pump, air conditioning compressor, and water pump to your battery; it transports energy from the engine towards the alternator, which in turn powers the battery. This set of electrical reactions is necessary to charge your battery while you drive, keeping your car running and the other electrical functions of your vehicle in check.

Without a properly functioning alternator belt, your car’s battery will not have enough power to keep moving, leading to issues with the air conditioning, stalling, electrics, and ultimately, a car that just won’t start.

Symptoms of a Loose Alternator Belt 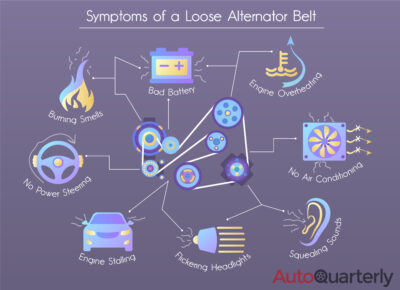 If you suspect you have a loose alternator belt, check out this list of symptoms to help you diagnose the problem.

If you’re driving along and notice your headlights flickering or dimming occasionally, the culprit could be a loose alternator belt. Without the belt working properly, there will not be enough electricity reaching your battery to power the lights correctly.

Other causes of this issue include a bad battery or an alternator that is on its way out. In this instance, it is a good idea to confirm other symptoms of a loose alternator belt so that you know how to proceed with a repair.

The alternator belt will activate the water pump when it is working correctly; if the belt has slipped off or is otherwise not working right, the water pump will not activate. This leads to your engine overheating because it is not being cooled down like normal.

Check the temperature gauge on your dashboard to keep an eye on your engine’s temperature, and don’t let an overheating engine go unaddressed; allowing this issue to continue could cause more extensive, expensive damage to your vehicle down the line.

Because the alternator belt is designed to power the battery, a faulty battery is a great indicator that you are having issues with a loose belt. If you are driving and suddenly lose power, if your car refuses to start, or if you replace the battery only to experience the same issues, a loose alternator belt is likely the culprit.

On your car’s dashboard, there is a small symbol that looks like a battery. This symbol will illuminate when the car detects an issue with your battery that could be caused by a number of things, including a loose alternator belt.

Engine stalling is related to the issue of a bad battery. If your engine suddenly stops working while you are driving, it can be quite a dangerous issue, so you should check on your alternator belt as soon as possible.

The alternator belt also controls the power steering functions; if you notice that it starts to become hard to turn your steering wheel, your car is hard to control, or your car does not follow when you turn the wheel, a loose alternator belt may be the reason.

When the alternator belt is loose or misaligned, it is likely that it will cause friction on the other parts of your car engine. This will result in a burning smell that can start in your engine and come through your air conditioning vents. This will be the distinctive smell of burning rubber, which is what most alternator belts are made out of. 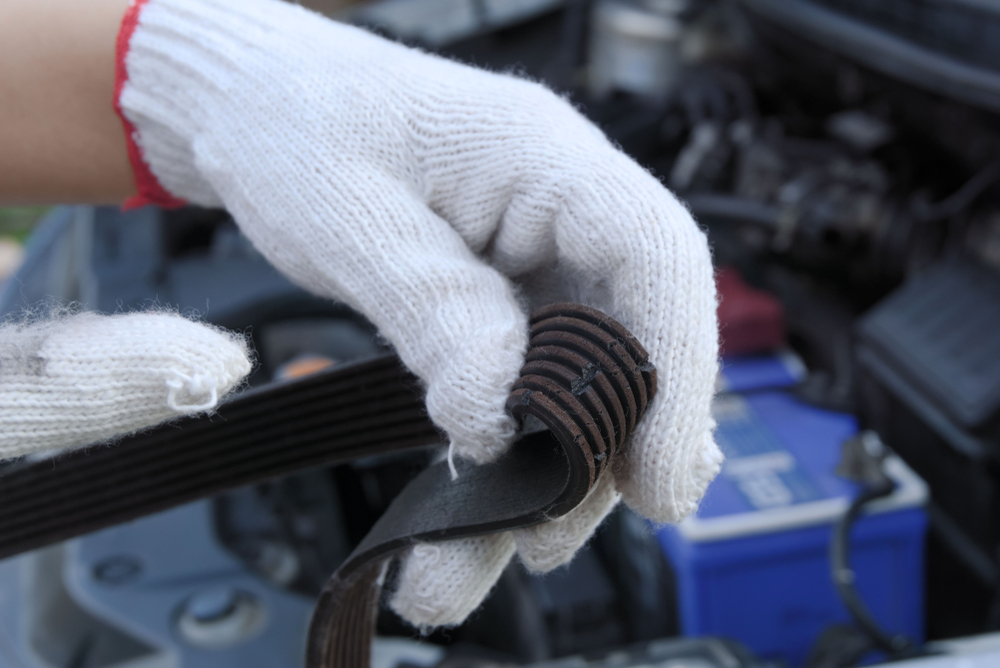 How to Check on Your Alternator Belt

In order to properly diagnose the cause of your car troubles as being due to a loose alternator belt, you should know where to look for the belt and what to look for.

To check the tension in the belt, you will need to grab a ruler and find the exact middle of the belt on its longest side between the pulleys. Grab this center point and try to move the belt; if it moves more than a half of an inch, it is too loose. If it moves much less than that, it is too tight. You can check the exact specifications for movement on your alternator belt in the vehicle owner’s manual.

Alternatively, all of the symptoms we discussed above could also be the result of a damaged alternator belt. If you examine the belt and it appears to be in the correct place and sitting snuggly, take a closer look at it. Any sign of wear, cracks, damage, or a dried-out belt means that the belt needs to be replaced.

If there are large chunks or gashes taken out of the belt, there could be something in your engine that is rubbing on the belt and damaging it; this should be investigated before you replace the alternator belt to prevent immediate damage to your new belt.

Replacement Cost for an Alternator Belt

A loose alternator belt is one that has slipped out of its proper place and is not functioning properly. This can happen naturally over time due to normal wear, or it could be because the belt is damaged and needs to be completely replaced. In the event that the belt has just slipped out of place, a realignment or a tensioning will likely fix the issue. We have listed the costs for both scenarios below.

An adjustment to your alternator belt is a relatively simple fix and will not cost too much.

Luckily, if your belt just needs to be tightened up, you will only have to pay for labor costs instead of also purchasing new parts. Labor can range between 40 and 150 dollars an hour, and this adjustment usually won’t take more than an hour unless the alternator belt is particularly difficult to locate or there are other issues with your alternator that are causing the belt to move out of place.

Keep in mind that unless your alternator belt is brand new without any signs of wear, it may be a better idea to go ahead and replace it. This will prevent you from experiencing alternator belt issues in the near future and will take care of the existing problem of the belt slipping off at the same time.

If your loose alternator belt is too worn out to simply tighten up, you will need to have it replaced. This can add on more cost to the repair as you will need to purchase the part in addition to paying for the installation labor.

The cost for an alternator belt alone is between 25 and 100 dollars depending on the kind needed for your vehicle. Labor costs remain the same at between 40 and 150 dollars per hour, so you can expect the replacement to cost you anywhere between 95 and 250 dollars on average, if there is nothing else wrong with your car’s overall alternator system.

Fixing Your Alternator Belt at Home

If you’re looking to save on repair costs, you can either tighten up or completely replace your alternator belt at home. For this process, you will need a ruler, a pry bar, a screwdriver, and gloves to protect your hands.

A damaged alternator belt can be replaced fairly easily. You will need most of the same tools that you use in tightening a loose belt and the process involves completely unscrewing the pivot bolt so you can remove and replace the belt. A detailed guide for this replacement process can be found here.

What Causes a Loose Alternator Belt?

There could be several things contributing to your loose alternator belt, including a faulty automatic tensioner, oil leaks, or a misaligned belt pulley.

Some of these issues may need to be dealt with before you tighten a loose belt, as they are the root cause of the problem; if you suspect that anything other than normal wear and tear has caused the alternator belt to slip loose, you may need to consult a professional.

Is It Safe to Drive With a Loose Alternator Belt?

While you may be able to make it short distances driving with a loose alternator belt, it is not a good idea to keep driving with it in this condition. You run the risk of your battery dying and engine stalling while you are on major roads, which can be extremely dangerous. Not to mention, if the power steering in your car goes off, you may not be able to control your car’s trajectory properly.

If you are experiencing any of the symptoms of a loose alternator belt, stop driving as soon as possible and make an effort to diagnose and fix the problem yourself, or take your car to a professional.

How Often Do Alternator Belts Need to Be Replaced?

Depending on environmental conditions and the brand of your alternator belt, it should last you between 60,000 and 100,000 miles before needing to be replaced. It is a good idea to check on the status of your belt during oil changes or regular tune ups to determine if there is any damage and that the belt is at its correct tension. 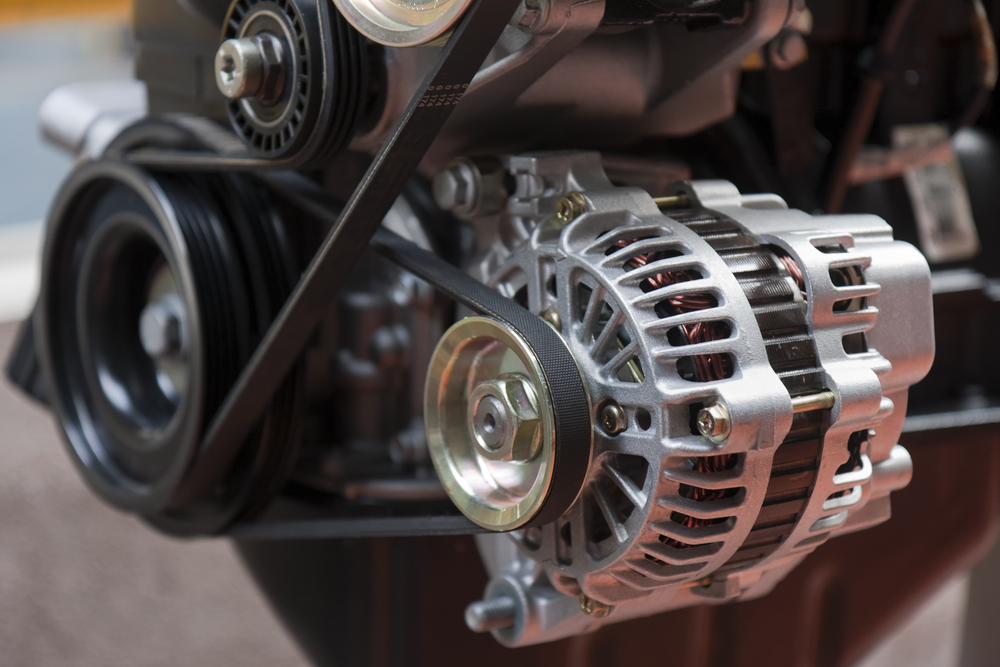 A loose alternator belt is often accompanied by recognizable squealing sounds and trouble with the electrics in your car. If you are experiencing any of these telltale signs of a loose belt, you should stop driving as soon as possible and get the issue fixed. As soon as you do, your car will be running as smoothly, noiselessly, and safely as possible.