Does your car shake, rattle, and roll? It might be the music, or it might be because your transmission mounts are faulty. Your transmission is a major component in the function of your vehicle, and if it’s not properly secured, it can cause all manner of discomfort.

If your car is shaking and you think your transmission might be to blame, this article is for you. We’ll talk about the symptoms, dangers, and solutions for bad transmission mounts.

Symptoms of a Bad Transmission Mount

The symptoms you’ll experience if your transmission mounts are failing will vary a bit. Still, they do tend to fit into three main categories.

The good news is that the three categories form the lyrics to a great song.

When you start your car, you normally feel vibrations for a few moments, and then everything smooths out. If it never smooths out or gets worse, faulty mounts might be to blame.

You may be able to hear a bad transmission mount better than you can feel it. Modern cars have a lot of flexibility and can absorb a lot of vibration without transferring it to your wrists. However, a vibrating transmission will usually make a lot of noise.

This is another area where you may be able to isolate which mounts are bad. A broken engine mount will make more noise when the RPMs climb independently of the speed of the vehicle. In contrast, a bad transmission mount will change pitch and volume depending on how fast the vehicle is moving.

The last set of symptoms concern how the car behaves while driving. It’s a little difficult to explain, but you get a twisting or rolling sensation when you accelerate if your transmission mounts are bad. That’s because the transmission is literally rolling in place rather than transferring the energy to the wheels, and you will feel that because it’s different from what you expect.

Is It Dangerous to Drive With Bad Transmission Mounts?

When transmission or engine mounts first begin to fail, there is very little risk to the vehicle. It will only get worse as time goes on, though. Left unchecked, a transmission mount that fails completely can cause serious damage as the transmission attempts to free itself from your vehicle.

The best thing to do if you experience the symptoms caused by bad mounts is to get it checked out when convenient. A good mechanic just has to shine a flashlight on the mounts to tell you if there is an issue, and they will be able to give you a timeline for replacement.

The bigger danger when driving with bad transmission mounts is that the car may become unpredictable. A bad mount can cause your vehicle to turn slower because you have to fight the motor’s rotational energy, which can make it difficult to manage your speed when swerving.

Bad mounts can also cause a transmission to slip. That can make your car accelerate much slower than normal, and that can be a problem if you are attempting to merge with traffic or perform a similar maneuver.

You will be the best judge of how safe your car is to operate in traffic. If you have any doubts, it’s better to play it safe and get to a mechanic as soon as possible. Don’t risk your life or the lives of others.

How a Transmission Mount Works

As the name suggests, a transmission mount is a bracket that assists in holding your transmission to your vehicle. There are actually two main ways that your transmission is attached. First, it is attached directly to the engine via the bell housing. That makes sense since the motor’s output shaft has to be connected to the input shaft of the transmission; otherwise, the car wouldn’t be able to move.

The second way a transmission is attached is by the transmission mounts. There are a lot of different types of mounts, and the style depends on the layout of your powertrain, but they generally have three things in common.

There are a lot of different transmission mounts because almost every manufacturer has their own idea about what works best. They tend to fall into one of two general designs based on the orientation of the engine. If you’d like a visual breakdown so you can tell what style your car is, CarThrottle has an excellent article here.

Front-wheel-drive and many all-wheel-drive cars use a transverse mounted engine with a compact transmission that fits in the engine bay. These transmissions may not have an extra transmission mount at all because their lightweight construction allows them to be held up by the motor mounts.

Rear-wheel-drive cars, Subarus, and 4x4s all use a traditional, or longitudinal, mounted motor. That means the transmission is behind the motor, between the two front seats under the car. These transmissions must have additional mounts because of the extra pressure they put on the motor.

The most common issue with a transmission mount concerns the bushing used to absorb vibrations. After about 60k miles or so, those bushings have begun to deteriorate, and as they dissolve, they create looseness.

The other major issue, especially where it snows, is that salt and water will cause the mounts to rust. Trucks are really susceptible to this issue because people often drive trucks harder and in worse weather than they are willing to in a car. Repeated exposure to salty, ice-covered roads will rot the entire frame of the truck; the transmission cross member is simply a smaller part and will rot faster than the rest.

How to Replace Transmission Mounts 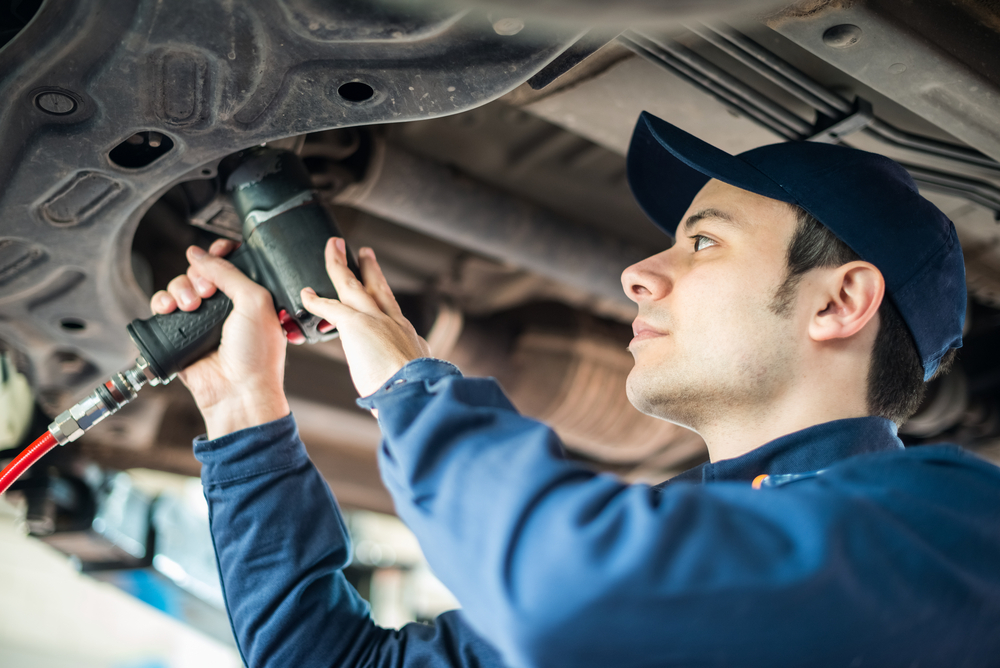 If you have space to work around your vehicle and a way to support the motor, changing the mounts yourself can save you a lot of money.

Unfortunately, every car is different, so you will need to look-up information on your particular make and model. YouTube can be an excellent resource since you can find videos of the exact process, like this video showing the replacement steps on a Chevy Suburban.

The following steps are just a general outline of the process.

Taking the Car to a Mechanic

If you don’t have the space or time to do it yourself, most mechanic shops would be more than happy to replace a few mounts for you. The cost will depend on how difficult it is to get to your particular mount and how much the mount costs.

Unfortunately, there is so much variety in mount location and style that it’s very difficult to estimate. A 2-wheel-drive truck, which is very easy to work on and has a bar-style transmission mount, may only cost you $200. The mount is often less than $100, and it takes less than an hour of shop time to perform the task.

On the flip side, something compact and very complicated like a new Honda CR-V may cost you more than $500. There are four transmission mounts; they each cost around $30, and they are very difficult to access.

Dealing with a car that wants to shake all the time is annoying, or worse, downright dangerous. If you think your transmission mounts might be on the way out, don’t wait. Use this guide to get you started down the right path and back on the road in style.