Home › Engine & Performance › Seized Engine – Causes, Symptoms, and How You Can Fix It

When your car doesn’t start at all, it can cause a lot of panic. After all, how will you get to work or shuttle the kids to school on time without a vehicle? Depending on how the car is acting, it’s a good idea to learn about seized engine symptoms and fixes because it could be causing your problem.

A seized engine is no joke. This issue is one of the most catastrophic things that could ever happen to your car because there’s a good chance you’ll need a completely new engine.

In fact, you might opt to buy a new car just because the process of repairing or replacing a seized engine is so cumbersome.

Here’s a look at everything you need to know about a seized engine in your car.

6 Common Causes of a Seized Engine 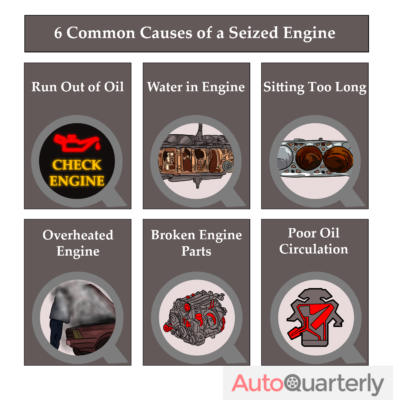 Multiple underlying causes can lead to a seized engine. It’s crucial that you listen to your vehicle because addressing these conditions before they have the chance to completely ruin your engine can save you some serious cash on repairs.

Oil is responsible for lubricating your engine, so it stands to reason that if you allow your car to run out of oil, the engine will seize.

As your vehicle runs, oil moves between the cylinder walls and pistons, creating a thin layer of protection and preventing them from overheating as they move. When this layer is no longer there, the metal on the pistons and cylinder walls rubs together.

These metal components get extremely hot if they rub without any sort of protection, damaging other engine components like the main caps, rod ends, and crank journals. The end result is an engine that will no longer run because it’s seized.

Keep in mind that it’s relatively easy to ensure your engine has enough oil, as you’ll notice a burning oil smell when it starts getting low. Your motor might also overheat, make a knocking sound, or experience a drop in performance as oil levels plummet. Your car’s oil pressure indicator might also inform you of your low oil levels.

Consider yourself lucky if any of these issues draw attention to your low oil problem because it could save you from significant repairs.

Water and your engine go together like, well, oil and water, so you’ll want to keep moisture away from your motor at all costs.

Of course, you’d never pour water directly into your engine, but it can still get in there if you drive through a large puddle or end up with water in your fuel tank.

Once water infiltrates your fuel tank, it hinders the air and fuel reaction inside your internal combustion engine. From there, the water can damage your engine’s connecting rods and seize the motor. This situation is called a hydro lock, and it can do a lot of damage to your engine.

When a vehicle sits for prolonged periods without running, rust can form in a variety of locations. While the inside of your engine is unlikely to rust under normal circumstances, it could happen if water somehow got inside before the vehicle went into storage.

Once an engine’s interior components are rusty, they’ll grind together when you try to start it, and the metal shavings this process produces could force the engine to seize.

When your car overheats, it causes the pistons to expand under the extreme temperatures. This process, in turn, can force the pistons to rub against or strike the cylinder walls, which can seize the engine.

You could also blow your head gasket when this occurs, which is another pricey repair.

Never allow your engine to overheat and shut the car down immediately if you get a notification on your gauge that its temperature is reaching a dangerous level.

Engine components, including valves, pistons, and connecting rods, can sometimes break off and get stuck elsewhere in the engine. When this occurs, they could eventually seize the motor.

A timing belt or camshaft failure can have the same effect, as it can force the valve and pistons to collide, leading to a seized engine.

Just because you have oil in the tank doesn’t mean it’s getting to where it needs to go. Poor oil circulation is usually the result of a faulty oil pump, and it can cause rubbing inside your engine that causes it to seize. However, you’ll usually notice that your oil pump is on its way out because your oil light should come on, and your engine will start to overheat.

Now that you’re aware of why your engine could seize in the first place, it’s time to look at some ways you can tell you have a seized engine. 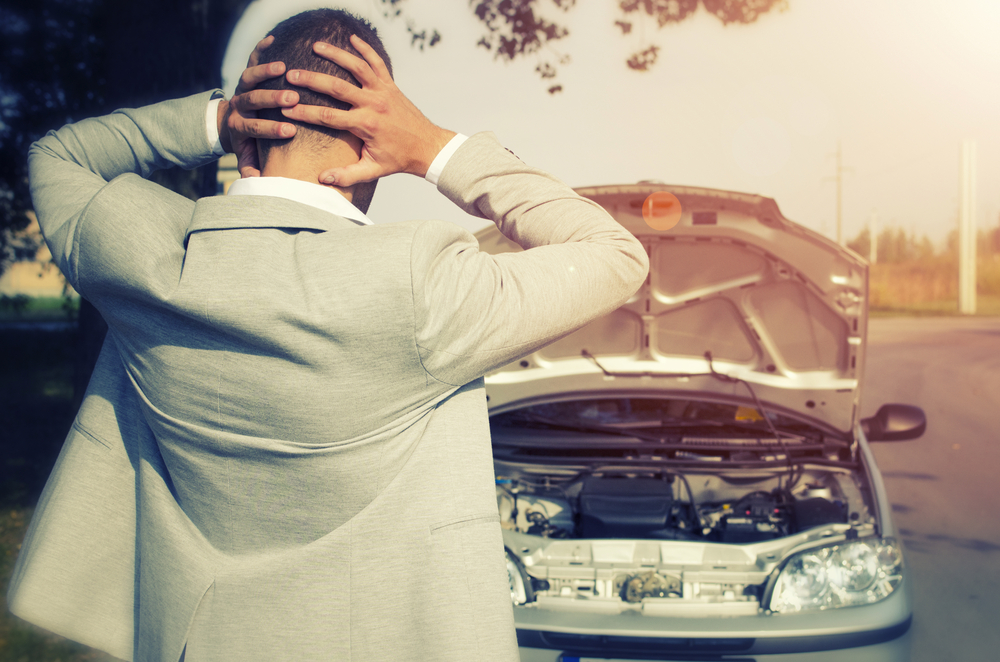 The symptoms that a seized engine produces depend on the stage of the damage and its underlying cause. It’s rare that a motor will completely wreck without first offering some warning signs, so identifying that you have a problem before it reaches a critical stage could save you some money in repairs.

The most obvious and destructive symptom of a seized engine is when you turn the key, and nothing happens. All of your battery-powered components like your radio, heater, and headlights will still turn on, but the engine won’t do anything when you try to turn it over.

You might hear a clunking noise as you try to start the vehicle, too, which is your car’s starter impacting the engine’s flywheel. Still, your car might not start for many reasons, so don’t automatically assume the worst.

If your car won’t start, but you’re unsure about the underlying cause, check under the hood for burnt or melting wires. This condition is common with a seized engine because as you attempt to start the car, the electric cables that control the starter will overheat and begin smoking.

Another common symptom of a seized engine is physical damage under the hood. When looking at the motor, a piston that has lodged into another part of the motor might be visible. Basically, if part of your engine that isn’t ordinarily visible is all of a sudden sticking out of it, you have a seized engine that has a bunch of damage.

This scenario is a sure sign that your engine will require significant repairs or a complete replacement to get your car back on the road.

An early warning sign of a seized engine is a loud clunking or cranking noise when you try to start your car. If you find yourself in this situation, don’t continue trying to start it because this sound is the starter hitting the flywheel. The noise generally means there’s inadequate lubrication inside the engine, so you’ll want to remedy the issue before trying to run your vehicle.

Smoke or fumes coming from your engine doesn’t always mean you have a seized engine, but it might. The gist is that as components inside your engine rub, they create a bunch of friction that can eventually cause a fire.

Before the fire erupts, though, you’ll see smoke and fumes, signaling that it’s time to turn your car off and look for the problem.

You could also run into smoke from the starter’s wires when trying to turn over a seized engine.

Other Issues to Consider

If you think you have a seized engine, you shouldn’t panic right away. That’s because there could be another underlying cause that’s creating similar symptoms.

A bad starter will prevent your car from starting and will create a similar noise. When a starter stops working, it often seizes up, too, resulting in a comparable experience.

Another issue you could experience is a vapor lock, which occurs when the fuel in your gas tank gets too hot and turns from a liquid into a gas. Since your engine can’t handle this gas, it will sputter, lose power, and lock up. While this scenario doesn’t mean the motor is physically seized, it has some of the same symptoms.

To alleviate a vapor lock, you’ll have to allow the fuel system to cool by turning the car off and leaving it for a little while. You can also splash some cold water on your fuel lines and pump if you’re in a hurry.

Keep an eye out for all of these symptoms when your car won’t start to determine if a seized engine is the root of your problem.

How to Fix a Seized Engine

First things first, if your engine seized while you were driving it because it ran out of oil, there’s nothing you can do to repair it. The motor is done, and you’ll have to completely rebuild or replace it to get the car running again.

The same goes when pistons have pushed through the cylinder walls or any other scenario where a significant amount of damage has occurred inside your engine.

However, a repair is possible in some circumstances. If you’ve left the car sitting for a lengthy period and the engine has seized, there is hope.

In this situation, remove the spark plugs from the car and fill all of its cylinders with oil. You’ll then want to leave the car sitting for a few days while the oil works its magic.

From there, you can try physically turning the engine over using a breaker bar. If this works, there’s a chance you can save the motor and start the car. Otherwise, you’ll have to replace or rebuild it.

You can repair a hydro locked engine by removing the spark plugs and cranking the engine. This process should pump the water from the cylinders.

Keep in mind that this technique will only work if there’s only a little bit of water in your engine. If there’s a lot of water, you might have to rebuild it.

Preventative Measures You Can Take 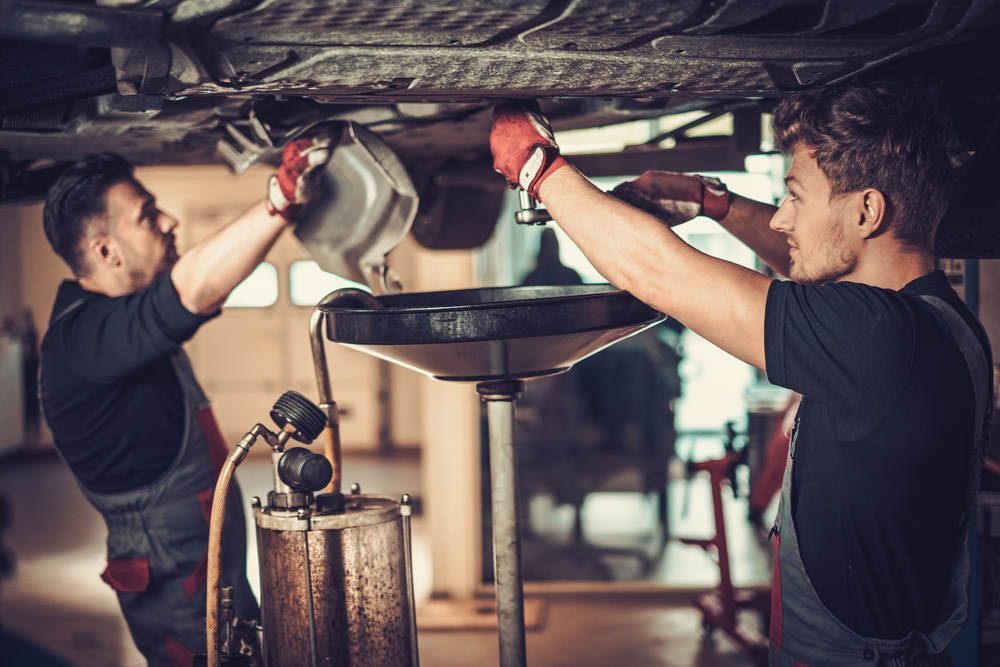 As you can see, you don’t want to end up with a seized engine. This problem is one of the worst things that can happen to your car, and unless you’re driving a classic or luxury vehicle, you might just replace it instead of fixing it.

However, there are some things you can do to prevent your engine from seizing in the first place.

First, make sure you check your oil regularly. This act is particularly vital if your car is burning oil because that will cause you to go through it more rapidly. Check your oil levels regularly to ensure it isn’t reaching dangerous levels.

Next, go through with all of the recommended regular maintenance for your car. Getting your oil changed every 5,000 miles or at minimum twice per year is the most important thing you can do to prevent this problem because it ensures your oil levels are optimal. A mechanic will also inspect your engine for damage at this time, so you can address any issues before they seize your engine.

Finally, if it feels like your car isn’t performing the same way it did a few months ago, get it into the mechanic for an inspection. By having a professional look over your engine, you can identify the issue and address it before a seized engine completely ruins your car.

A seized engine is a significant problem with no real repair options, so you’ll want to avoid it at all costs. The good news is that there are often warning signs, such as noises coming from under your hood, and your engine won’t usually seize if you keep it well-lubricated with oil.

Schedule regular maintenance for your car and listen to any out-of-the-ordinary sounds it’s making to ensure your engine staying running at optimal levels for years to come.