If there’s one thing you probably take for granted with your car, it’s the ability to easily control it with the steering wheel. But what happens when you lose that ability? What does it mean when your steering wheel becomes ridiculously hard to turn?

There are a variety of potential issues, ranging from the likely (an issue with your power steering fluid) to the extremely unlikely (you’ve suddenly become a ghost). Below, we’ll take a look at what each problem could mean — and what you need to do to fix it.

7 Reasons Why Your Steering Wheel Might Be Hard to Turn

As we’ll discuss, modern vehicles use electric power steering (or EPS), which is far less likely to have problems than previously popular steering methods. As a result, many of the causes on this list will be exclusive to older cars. Even vehicles with EPS will sometimes have power steering issues, though, as you’ll soon discover (on this list, we mean — hopefully not on the freeway). 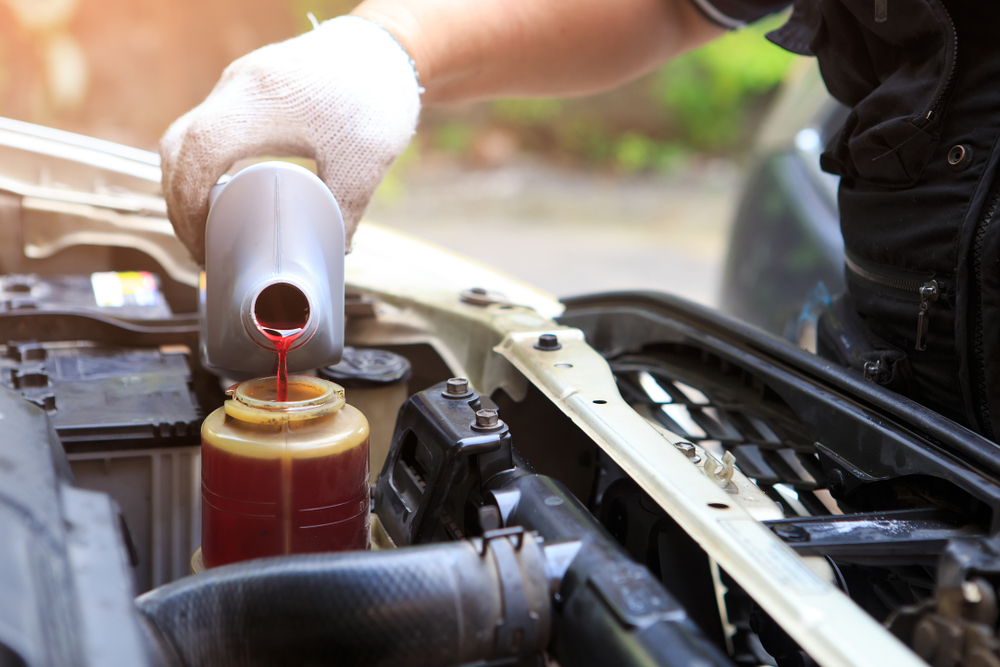 This is the most common cause of steering issues, and the first place you should look if you have a car with hydraulic power steering.

Typically, low power steering fluid levels are caused by a leak somewhere in the system, as the fluid shouldn’t burn off while driving or anything like that. That means you need to start looking around for the cause of the leak — and a cracked or loose hose is often the culprit.

If you do have a damaged hose, you can expect the repairs to cost somewhere between $100 and $200 — a small price to pay for the ability to, you know, control the massive hunk of metal you’re piloting at high speeds while surrounded by people in similar projectiles.

We know what you’re thinking — how is getting thick a bad thing? After all, cousin Darlene got thick a few years ago, and now she’s a big star on Instagram.

Two things: one, you’re thinking of “thicc,” and two, thick power steering fluid won’t flow freely through the hoses. This slows down its responsiveness, making it harder to turn the steering wheel.

The thickness is caused by dirt and debris accumulating in the fluid reservoir, where it then gets mixed in with the fluid. To remedy the problem, you’ll need to flush the old fluid out and replace it with new, skinnier fluid.

A power steering flush usually costs around $100, and it’s something that should be done regularly as part of standard preventative maintenance.

The other major component in a hydraulic power steering system is the pump, so it’s about the only other thing that can go wrong. Well, except for the power steering belt, of course, but they never go out — right? (Spoiler alert: wrong.)

If the hydraulic pump starts malfunctioning, it won’t create hydraulic pressure — and you won’t get much of steering assistance, either. It won’t make it impossible to turn the wheel, but you’ll have to work a lot harder.

Power steering pumps can go out for a variety of reasons, but the most common is just regular wear and tear. Fixing it isn’t cheap, either — expect to pay between $500 and $700 to get the job done.

In addition to making the wheel hard to turn, other telltale signs of a power steering pump that’s about to kick the bucket are a squealing or groaning sound when the car starts or the wheel is turned, along with a reddish-brown puddle under the car. That’s your power steering fluid, and it doesn’t do you much good lying there on the ground.

If you guessed this would be next on our list, congratulations — we’re deputizing you as an honorary mechanic.

The belt keeps the pump, alternator, and air conditioner running, and comes in either a V-belt or serpentine style. The belt is in constant motion while the engine is running, and all that friction eventually eats through the rubber.

Once the rubber gets loose, cracked, or broken, all sorts of bad things will happen. It will be harder to turn your steering wheel, your air conditioner will stop working, and the engine will stall — possibly while you’re on the freeway.

Replacing a belt is easy and inexpensive, and a mechanic will charge less than $100 (although you can easily do it yourself). However, a broken belt may lead to other problems in your engine, some of which can be catastrophic, so replace it immediately.

In addition to the steel rack and pinions, a steering rack is made of joints, shafts, and a gearbox, all of which can wear out over time. They can also get damaged if you run out of power steering fluid, as it’s what helps to lubricate them during use.

If this is the problem, chances are your steering will be much worse while the vehicle is still cold, so if the handling improves once the car’s been running a few minutes, you should have your steering rack looked at.

Replacing your steering rack will be expensive, clocking in at anywhere from $600 to $1,200 or more. However, the problem will only get worse (and more expensive) over time, so don’t wait to get the repairs done.

Also, $1,200 is a lot cheaper than getting in a wreck because the road turned and your car didn’t.

Most of the other issues on this list are exclusive to old-school hydraulic power steering systems, but that doesn’t mean that a car with EPS is immune from steering problems.

An EPS system is made of sensors, computers, and motors, and any of those components can fail. If they do, your steering assist might go out as well, giving your 21st-century car 20th-century problems.

If your power steering control module dies on you, it can cost between $800 and $1,000 to fix. This problem is easy to diagnose, though, as your car will usually hit you a warning light regarding your EPS.

You might not think your steering problems could start with your tires, but incorrect tire pressure can make a big difference in how easy it is to drive your car.

What’s more, if there’s a different amount of air in the tires on one side, your car might lean, which would also impact your ability to steer.

Of course, this isn’t likely to be the culprit if you’re having a ton of difficulty turning the wheel, but if your steering is just a little bit rougher than usual, it’s worth checking out. Fortunately, this is one of the cheapest problems to solve — you can usually get air for free at your local gas station.

What Should I Do if My Power Steering Fails While I’m Driving? 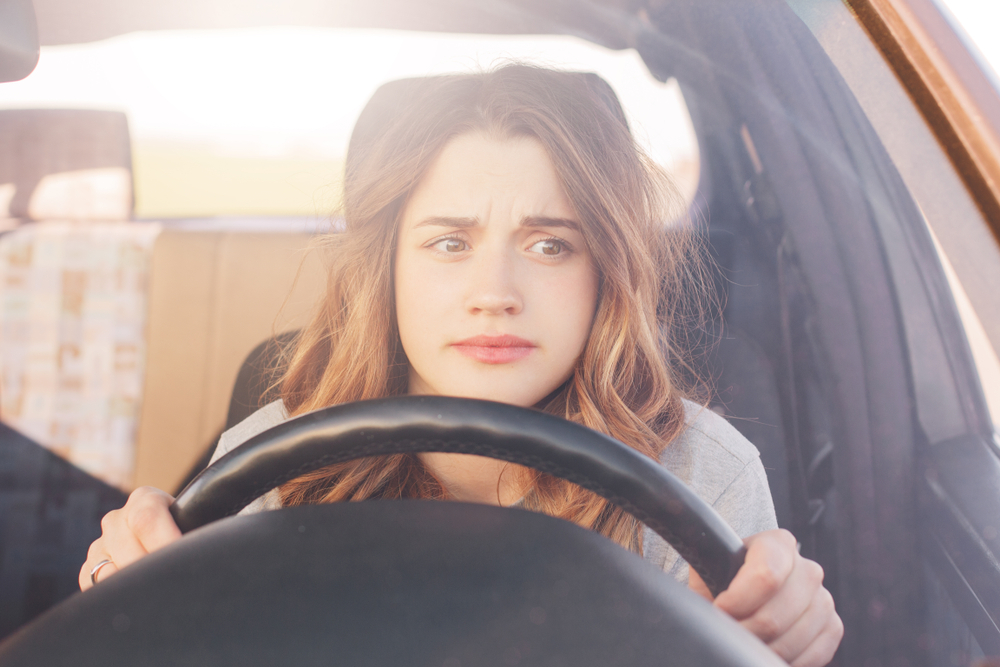 If you’re driving and the steering wheel suddenly becomes hard to turn, don’t panic. It may take a lot of effort, but you should still be able to steer. Here’s what you should do as soon as you realize you have a problem:

Put Your Hazard Lights On

Turn on your flashers so that other drivers know that your car isn’t in tip-top shape. They’ll also get out of your way, which makes it easier to avoid hitting someone.

Move to the Shoulder

Just because you can steer your car doesn’t mean you should keep driving it. It’s best to pull off to the side, well out of the way of traffic, so that you don’t pose a risk to other vehicles.

Be careful when changing lanes, and make absolutely sure there’s no one in your blind spot. Without power steering, you’ll find it very difficult to make a quick correction if you need to.

Determine How Bad the Problem Is

Once you’re safely on the shoulder, you can see how severe of an issue you have on your hands. Turn the wheel in both directions to check how hard it is to steer.

If you think the car’s still driveable, you may be able to make it home or to your mechanic. If not, though, you’ll need to call a tow truck. In fact, it’s probably smart to call a tow truck regardless, as that’s safer for everyone involved (plus you get to ride in a cool tow truck).

How Does Power Steering Work? 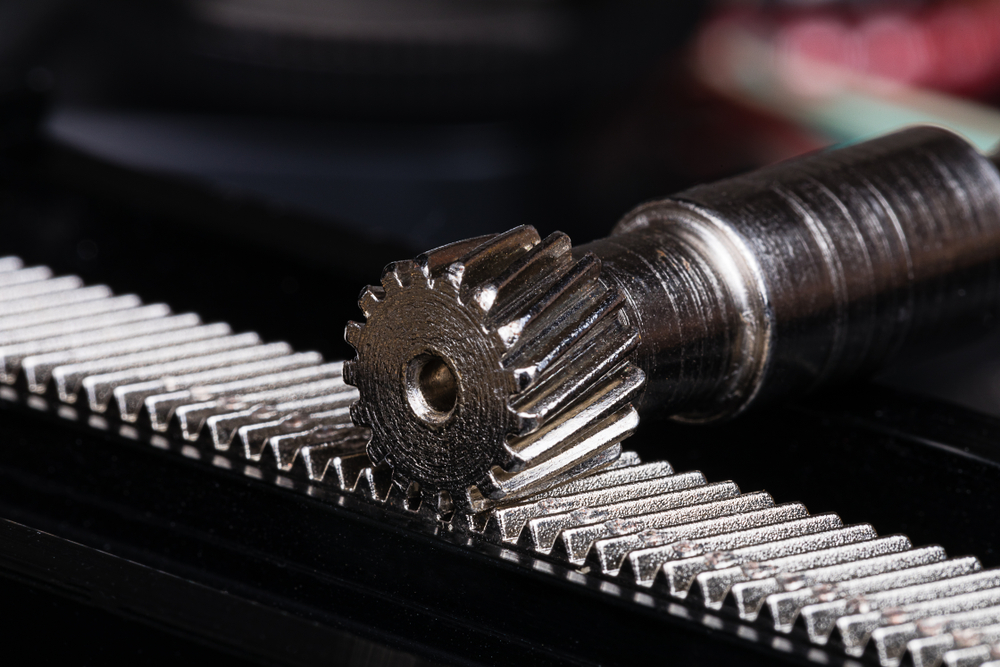 The majority of vehicles on the road use something called rack-and-pinion steering. The “rack” is a metal bar that goes between the front wheels, and it has little notches carved in the middle of it. The “pinion” is the gear that fits inside the grooves of the rack; when you turn the pinion, it moves the rack — and the car turns accordingly.

If you don’t have power steering, then you have to force that pinion to move the rack using only your own upper body strength. In fact, in the old days before power steering was invented, cars were much harder to turn — and engineers compensated by gearing them so that they required you to make several turns.

So, if you had to navigate a tight corner, you might have to make several mini-turns to do so; in a stunning bit of prescience, car manufacturers called this “pulling an Austin Powers.”

The first car to feature a power-steering system was the 1951 Chrysler Imperial. It used a hydraulic system, in which a pump pressurizes power steering fluid to push the pinion wherever it needs to go.

Hydraulic power steering changed the automotive world, and soon virtually every car boasted such a system.

There were a few problems with it, though. For one thing, the pump ran continuously, even when the car wasn’t turning, so there was a lot of wasted energy. Also, everything depended on the hydraulic fluid — if it leaked out or needed to be replaced, you’d lose your steering assist.

The electric sensor that controls the EPS system will either be mounted on the steering rack or the steering column. Its sensors determine how much assistance the driver needs to be given, taking into consideration both how hard the driver is turning the wheel and how fast the car is moving.

EPS is more efficient, eliminates the need for hydraulic fluid maintenance, and opens the doors for lane-keep assist and automated driving features. It also makes it easier to adjust steering weights, so that you can have loose and easy steering at low speeds and tighter steering when you’re flying down the highway.

Can I Still Drive My Car if the Steering Wheel Is Hard to Turn?

That depends on how hard the wheel is to turn, as well as your tolerance for danger. We wouldn’t recommend it, though.

Many of the problems on this list — like a fluid leak, bad belt, or worn-out rack — can cause other, more severe problems if allowed to linger, so you’ll actually save money by getting the repairs done.

About the only issue that you could potentially safely ignore is the low tire pressure, but even that’s dangerous. There’s not much reason to put it off, either, since it’s free and easy to solve. 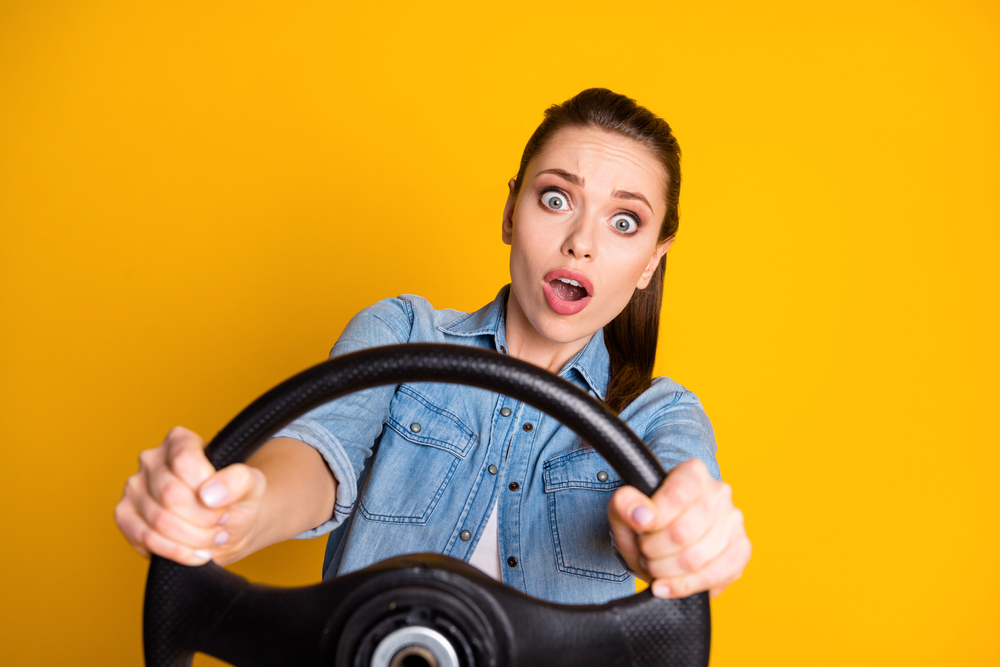 Having a steering wheel that doesn’t quickly respond to your commands can be a frightening experience. However, diagnosing the problem is fairly simple, and once it’s fixed, your car should be good as new.

You can always ignore the issue, but it turns out that being able to steer is often important when behind the wheel. We learned that in our court-mandated defensive driving class.