Rocker arms are a crucial engine component. If something’s up with one of them, your car won’t run optimally — or perhaps even run at all. Most people don’t know that anything is wrong with their rocker arms until they hear a weird tapping sound coming from the engine.

Rocker arms usually last for the lifetime of the engine. However, they can prematurely wear and become damaged through inadequate maintenance and careless use. You will need to replace your engine’s rocker arms if they’re damaged, as the symptoms only get worse if you continue to drive.

We’ll start this article by looking at what rocker arms are before going through the main things that cause rocker arm damage. After that, we’ll run through the five common symptoms of bad rocker arms, before ending with how much you can expect to pay to get them replaced.

What Is a Rocker Arm and What Does It Do? 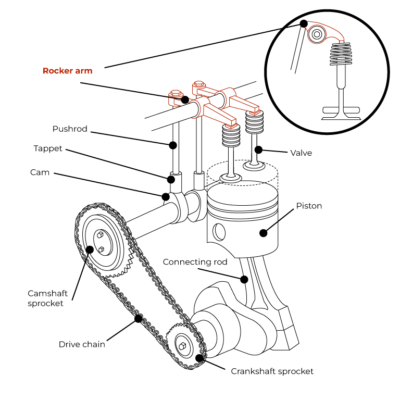 A rocker arm is essentially a small lever in your engine that turns radial movement into linear movement. In other words, it turns the spinning movement from the camshaft into an up and down movement that opens and closes the valves. That’s a pretty important job, as stuck valves can cause many serious engine issues.

Some engines have overhead cams, while others have cams located below the rocker arms. In the former’s case, the camshaft rotates, and the cam lobes push down on the rocker arms, causing the valves to open and close. For the latter, there are pushrods that pull and push on the rocker arms to do the same job.

Rocker arms are strong; they’re usually made from steel, which gives them a good strength-to-weight ratio. That’s required for leverage, allowing them to exert enough force to open and close engine valves. That said, rocker arms can become damaged or loose. Your engine won’t run correctly if the rocker arms are damaged because the valves will no longer open and close correctly.

While you may only have a single bad rocker arm, engines have multiple rocker arms, and several have likely worn or become damaged at the same time.

What Causes Damage to Rocker Arms? 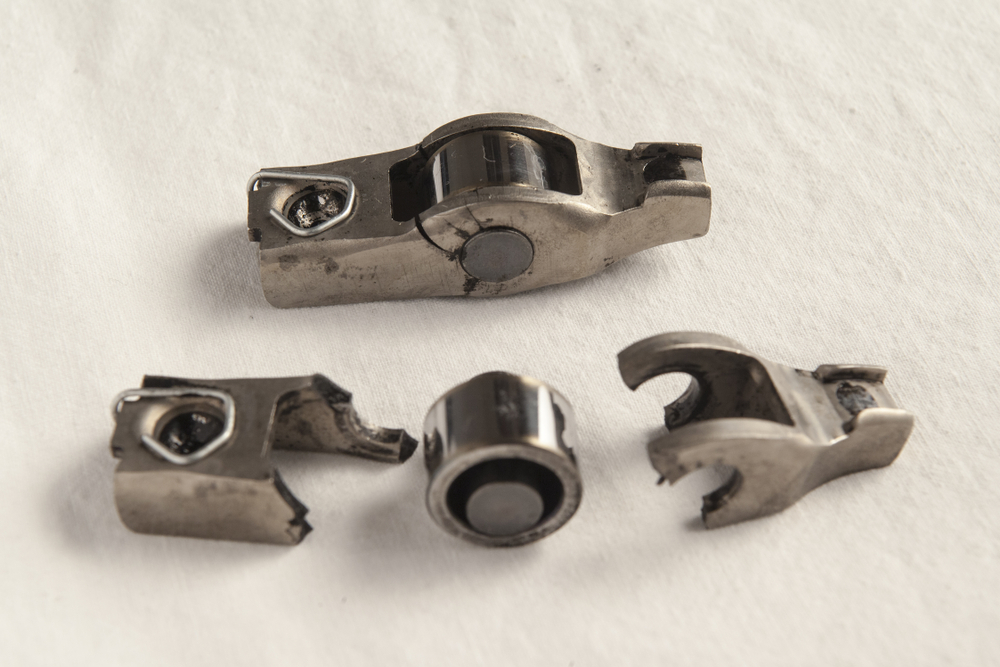 Several things can damage a rocker arm. Below are four of the most common causes of rocker arm damage.

Fuel problems can cause damage to the rocker arms, which results in the valves remaining open, causing the rocker arm to slip from under the crankshaft. This can be caused by bad fuel injectors or the wrong type of fuel used in your car. You’ll usually experience engine misfires and poor performance if there’s a fuel problem with your car.

Engine oil picks up a lot of dirt and debris inside the engine, which is why oil should be changed regularly before it becomes too contaminated. Contaminated oil will prevent a sufficient flow of oil throughout the engine and can result in rocker arm damage, in addition to many other problems.

This issue is easily preventable by changing your car’s oil at the recommended intervals. There are plenty of signs of bad engine oil — dirty engine oil on the dipstick is the easiest way to check the condition of your oil. If it’s dirty, change it before it causes any problems with your engine.

Bent valves are a serious issue as they’re expensive to replace. The valve will stay open if it’s bent, which can cause issues with the rocker arms in the same way as fuel problems can.

Bents valves are usually caused by some sort of engine damage. Over revving or bad engine timing can result in bent valves. You’ll need to have the engine rebuilt if the valves are bent.

All engine components wear as you rack up mileage in your car. Some parts last just a few thousand miles, while others should last the lifetime of the car. However, if your car has hundreds of thousands of miles on the clock, it’s likely some of the long-lasting components will be worn; that includes the rocker arms.

The condition of your rocker arms after hundreds of thousands of miles will depend on how well the engine has been maintained. If you have regularly serviced your car and performed oil changes with the right oil, the rocker arms should last forever. 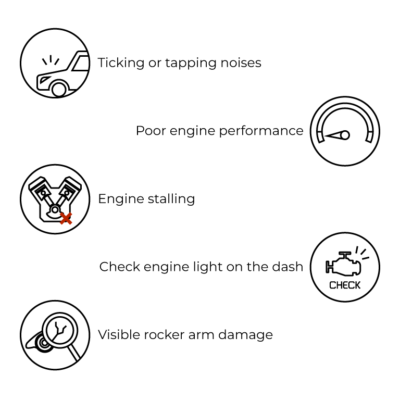 Below you’ll find five common symptoms of rocker arm damage. If you notice your car is exhibiting any of these symptoms, you may have one or more bad rocker arms.

Ticking or tapping noises are perhaps the most common and easily identifiable symptom of bad rocker arms. The sound will be at its loudest when starting the engine or idling.

These noises aren’t always caused by bad rocker arms; they can be caused by other issues such as warped valves, a worn crankshaft, or insufficient engine lubrication.

Before assuming the noise is caused by the rocker arms, you should get a mechanic to diagnose and confirm that’s the issue as rocker arm replacement isn’t cheap.

For the engine to perform correctly, the valves must open and close fully and at the right time. Fuel efficiency and engine performance will go out of the window.

If you notice your engine isn’t performing normally, you might have bad rocker Arms. Many other issues can cause poor performance, so don’t always assume it’s because of the rocker arms. You’ll need to have them looked at by a mechanic to determine whether they’re bad

Bad rocker arms can cause your engine to stall in the same way that it causes bad engine performance. You may notice that your car stalls right after starting, or it may stall when accelerating from a slow speed.

Stalling usually only happens when the rocker arms are seriously damaged and in need of attention. If it’s got to this point, you should get the problem fixed as soon as possible as your car will soon become undrivable.

Check Engine Light on the Dash

This will usually require a mechanic as you’re pretty much taking the engine apart at this point. That said, if you’ve worked on engines before and you fancy taking a stab at it, you can do this yourself. 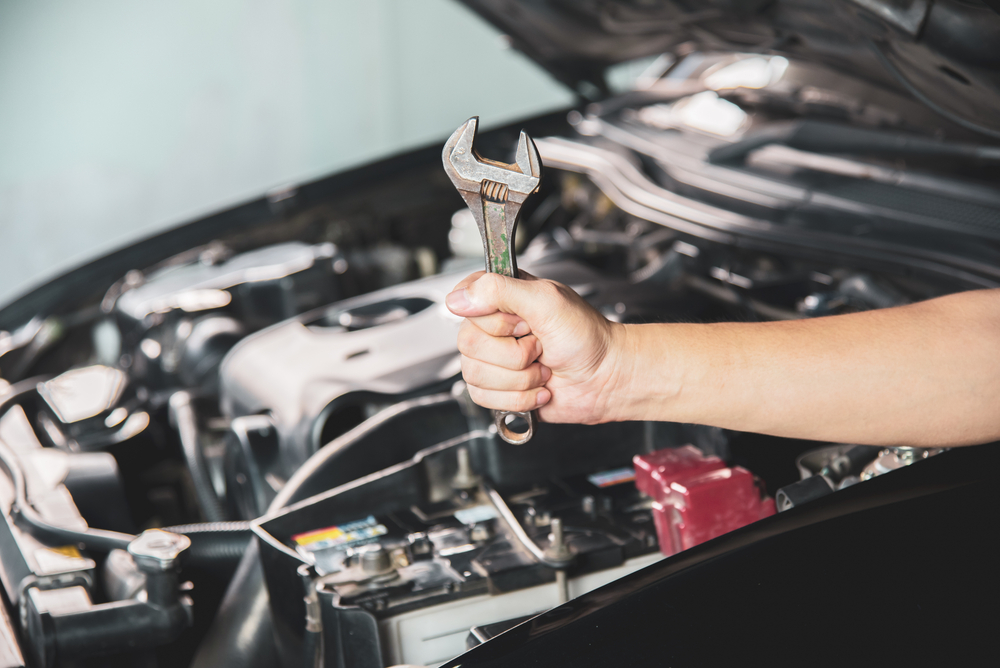 The cost of replacing your engine’s rocker arms will depend on several factors, such as how many need replacing, your vehicle’s make, and whether you pay a garage to do the work.

If you fancy getting your hands dirty, you can attempt the job yourself. This will save you a significant amount of money as you’ll only need to pay for the parts, but you will need at least a few hours of spare time and the right knowledge to do it.

A single rocker arm will cost you anywhere from $15 to $60. That’s cheap, but remember that you may have more than one rocker arm that needs replacing.

You will find rocker arm kits available to purchase, which contain various other components you may need, like pushrods and guide plates. They also come with a full set of rocker arms which should be cheaper than buying them individually. You can expect to pay between $100 and $500 for a rocker arm kit.

The alternative option is to pay a garage to replace the rocker arms for you. This is a sensible option if you don’t have any mechanical experience or if you’re short on time.

The other benefit of taking your car to a garage is that they can diagnose and make sure it’s definitely the rocker arms causing your symptoms. There’s nothing worse than paying a lot of money to replace something that isn’t broken!

For a garage to replace your rocker arms, you can expect to pay anywhere in the region of $500 to $1,500. That price is inclusive of parts and labor.

High-performance rocker arms won’t be beneficial for most people, and you’d be better off sticking to original OEM parts. However, if you’re big on performance and tuning, you might want to carry on reading.

You can purchase aluminum rocker arms which are much lighter than standard steel rocker arms. The benefit here is that they allow for better engine performance and a higher maximum rev limit.

Again, this won’t be beneficial for most people, but if you’re into tweaking your engine for maximum performance, it’ll be an attractive option.

Price-wise they’re not that much more expensive than steel rocker arms. In some cases, you can find them for even cheaper on sites like eBay or Amazon, although you’ll want to make sure they’re of a decent quality.

Rocker arms play an important and silent role in your engine’s functioning — that is unless they’ve gone bad. In that case, they won’t be so silent, and your engine won’t function optimally.

Rocker arm replacement is fairly expensive, but most of the cost is down to labor. You can save some money replacing them yourself, although we’d recommend letting a garage do it for you if you’re not confident in your mechanical skills.

Rocker arm issues aren’t all that common, but when it does happen, you’ll want to get the problem fixed before it gets even worse. It won’t magically get better by itself.