Home › Knowledge Base › Throwout Bearing Woes: What to Do When Your Car Groans

It can be annoying when a car makes unusual noises. Not just because the noise itself disturbs your peace, but because it usually means that something is broken. Unfortunately, weird clutch noises are no exception. If you hear squealing or groaning every time you press on the clutch, the throwout bearing might be that something broken.

The good news is that it’s not the end of the world. It might be annoying, but clutches are serviceable parts, and the bearing can be replaced before it fails completely. In this article, we’ll be looking at the symptoms of a bad bearing, what a throwout bearing does, and how to replace them.

Symptoms of a Bad Throwout Bearing

There are four main symptoms of a failing throwout bearing. The important thing to keep in mind is that when a throwout bearing first begins to fail, it won’t fail completely. You are very unlikely to go from normal to total clutch failure, so pay attention to the symptoms, and you can catch it early.

The throwout bearing is a part of the clutch assembly, so when you are just driving around or letting your car idle, you probably won’t hear anything out of the ordinary. When you step on the clutch, though, you will hear a squealing. You can give this video a listen to hear the noise a bearing failure makes.

It is possible that the clutch itself is failing and not the bearing, but it doesn’t make much of a difference. You should replace both at the same time because most of the cost is in labor, and it’s the same amount of labor for both.

Your clutch should operate smoothly. When you press it in, there shouldn’t be an excessive amount of resistance. When you release the clutch, you should be able to feel the grab point.  A bad throwout bearing will alter the clutch feel, though.

The most common clutch feel issue is excessive vibration. You’ll feel a lot of wiggling as you press the clutch in. The other common issue is that the clutch will be really stiff. It will be difficult to press, and you may not be able to feel the grab point.

A bad throwout bearing may prevent the clutch from functioning as it should. That can make shifting difficult, especially when going into gear from a stop. It will feel like the clutch isn’t properly disengaging, as if you didn’t press the pedal down far enough.

Eventually, a bad throwout bearing will prevent the clutch from working, and may destroy it. This is the final symptom because it means you won’t be driving anymore, so it’s best to get the problem fixed as soon as you suspect it.

On its own, a failing bearing doesn’t present much danger. It’ll make annoying noises, and you’ll lose some driving comfort, but as long as your clutch is still working, you can drive normally.

The problem is that as it gets worse, it can begin to destroy other components due to heat and other friction issues. Eventually, if you don’t replace the bearing, the clutch will fail. That can be dangerous depending on where you are when it fails. It won’t cause you to crash, but it can prevent you from safely slowing down or speeding up.

What Does the Throwout Bearing Do? 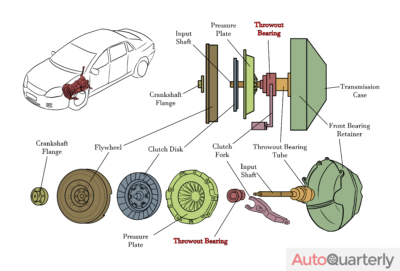 To better understand what a throwout bearing does, it may be easier to call it by its other name, the “clutch release bearing.” That sort of sums up everything it does. It’s a bearing that presses against the pressure plate and disconnects the engine from the transmission.

To understand what happens when they start to fail, though, you’ll need to know a little bit about how clutches work in general. Let’s start by listing out the components involved so we are all on the same page.

Parts of a Clutch

How a Clutch Works

To change gears, you need a way to disconnect the motor from the transmission. That way, you aren’t trying to manipulate the gears while they are under power and fighting against change. The way a car’s transmission gets disconnected from the motor is via the clutch.

That releases the pressure, and the clutch disk can pull the friction surface away from the flywheel. If that seems pretty complicated, it’s because it is. This animation does a good job showing all the parts in action and provides a good overview of all the parts we talked about.

What Happens When the Throwout Bearing Fails

The throwout bearing has to be able to spin and survive lateral pressure. When it begins to fail, it stops being able to efficiently handle those loads. The sound you hear is the sound of the bearing’s internals grinding against themselves. This excess friction causes heat, which in turn makes the bearing fail faster.

If the bearing ceases, then it starts grinding against the pressure plate instead of simply pushing on the fingers. That creates even more heat, and the entire clutch begins to break down.

How to Prevent Throwout Bearing Failure

Bearings are very simple devices, and as long as they remain adequately lubricated and operate within their load ratings, they can last forever. As soon as either of those parameters falters, though, they will deteriorate rapidly.

How to Replace a Throwout Bearing 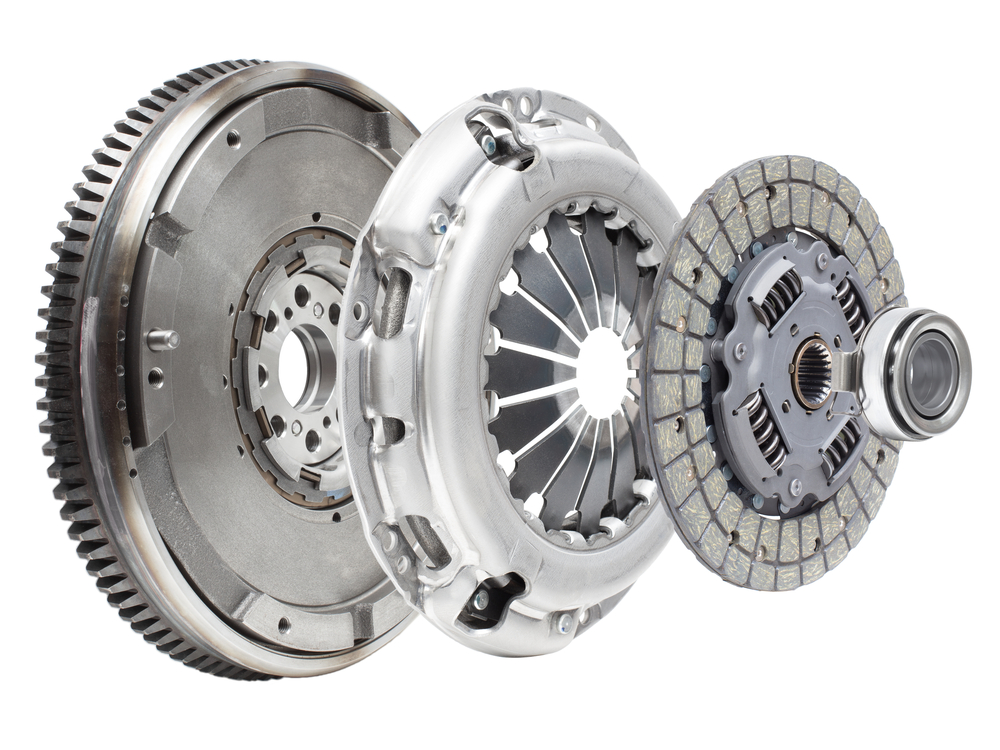 Unfortunately, replacing a throwout bearing is not for the faint of heart. It requires removing the transmission from the vehicle. That’s a job that can be done fairly easily if you have an older vehicle or a lightweight RWD vehicle. However, it can be an absolute nightmare if you have a bigger FWD vehicle.

If you’d like to get a feel for doing it yourself, here’s Donut Media swapping a clutch in their driveway. You’ll have a good idea of what you’ll have to do if you give a watch. Most people are simply going to take their car into a shop and have a mechanic do it.

If you are going to replace the throwout bearing, you will be removing the clutch from the vehicle. This is a very labor-intensive process, so you should take advantage of the labor being done.

The friction disk and pressure plate will often be nearing the end of their lifespan if the bearing has failed. It’s often a good idea to replace them at the same time; that way, you don’t have to remove the transmission again when they need to be replaced.

The Cost of Replacing a Throwout Bearing

The bearing itself is usually around $100. A good clutch is $150-250. That means if you are doing it yourself, you can expect to pay around $400. That includes some miscellaneous hardware and fluids.

A shop, though, will probably charge more than $500 in labor. It can be as much as $1,000 in labor, or about six hours of shop labor. That means you should probably budget between $600 and $1,200 dollars if you are going to have a shop replace your throwout bearing.

If your clutch is making noises, you should silence it. Not only is it annoying, but it means you are losing valuable energy to heat and noise. We hope this guide can help you silence a complaining clutch and enjoy the drive that much more.