Home › Knowledge Base › Dashboard Battery Light On: Causes and Solutions

All modern cars contain a 12-volt rechargeable battery that powers all of the vehicle’s electrical components including the radio, headlights, ignition system and, of course, the engine control computer. It goes without saying that the battery is key to the operation of the car; a drained battery means a car won’t even start.

Despite the importance of your vehicle’s battery, many people have no idea how the battery works or what kind of problems it could develop. For this reason, many people panic as soon as they see their dashboard battery light come on.

Here, we take a closer look at what causes the dashboard battery light to come on so that you can have a better idea of why your car isn’t running properly and what you can do to resolve the issue.

The Battery – A Vital Component

Like every battery in any piece of electrical equipment, your car’s battery will die eventually if it doesn’t get charged back up again, so every vehicle as its own inbuilt recharging system. The majority of vehicles have a voltage regulator and an alternator that ensures the battery stays charged while supplying electricity to your vehicle as the engine runs. Usually, an alternator puts out around 500-1000 watts whenever necessary. If the alternator or voltage regulator develops a problem, your battery will no longer be able to recharge properly.

At one time, there were only two ways to know if a car battery was about to die. Car owners had to either test the battery’s voltage or they had to wait until the headlights began to flicker. These days, thanks to modern technology, the car dashboard has a battery light that illuminates if the vehicle’s computer detects that there is a problem with charging the battery. This gives you the opportunity to repair the problem before the battery gets completely drained of energy and you can no longer drive your vehicle to a garage or service center to get the problem resolved.

How Can a Car Run Normally Even if the Dashboard Battery Light Is On?

Your car can often run normally even if the dashboard battery light comes on because the car is capable of running off the energy that is already stored in its battery. The car, therefore, carries on running perfectly until its battery runs flat. After that, none of the car’s components will work. While the battery light remains on, it’s still possible to drive to a garage – nothing will be damaged. However, you’ll need to arrive at the garage before your battery fails as otherwise, the car will no longer be able to start and you’ll have to use jumper cables to get going again.

My Battery Light Is On – What Does It Mean? 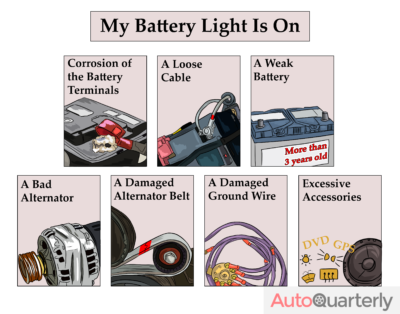 There are several possible answers. Here are a few of the most common issues that can cause this light to come on:

Corrosion of the Battery Terminals

Check the area where the posts meet the battery cables to see if a white powdery or crusty substance can be seen. Its presence means you’ve got a corrosion problem. Luckily, it’s quite easy to fix this problem. Just disconnect the battery’s cables and use a mix of water and baking soda (1 tablespoon of baking soda added to 200ml of water) and clean the terminals and posts with a toothbrush.

Just as corroded battery terminals cause the charging connection to be incomplete, if the battery cables are not connected tightly enough the battery light may illuminate while driving. This may happen if you’ve installed a new battery or hit a bump on the road.

You can fix this problem by ensuring the battery cable terminal is situated as far down the battery post as possible. Take a socket or wrench (a 10mm works best for the majority of vehicles) then tighten up the nut on both terminals until they stop turning. If you spot corrosion too, clean that away before you tighten the nuts.

Is your car battery more than three years old? It’s possible that the battery could be dead or faulty. This is particularly likely if you frequently drive your car or if you live somewhere with a hot climate. Car batteries often die more quickly if they’re being used in a hot temperature. If the battery of your car is close to giving out completely, the dashboard light may illuminate at any time.

While car batteries have a warranty of 48, 72 or 96 months, they’re unlikely to last for that full length of time. Depending on when the battery dies during the warranty period it’s possible you may be able to get a replacement for free or a credit towards a brand new battery.

If you need to confirm that the battery is faulty, you should use a multimeter. This will test the voltage. Connect up the negative lead to the battery’s negative terminal and the positive lead to its positive terminal. The voltage reading should be around 12.4 – 12.7 volts. Should the reading be less than 12.2 volts, the battery will probably need to be replaced.

The vehicle’s ground wire connects to the battery’s negative terminal. If the car’s negative battery cable wears out or becomes damaged, the power flow will be affected to the car’s electrical components and the dashboard battery light will illuminate while you drive. If there is any visible damage to your ground wire it will need replacing.

The car’s air conditioning, heating, headlights, and power steering all use lots of power. Then you have to add in accessories such as the stereo, windshield wipers, fuel pump, rear defroster, DVD player, GPS system, and phone charger.

If your battery light comes on while you’re driving, try switching off your air conditioning or other components that are non-essential to your car to see if there is any improvement.

What Do I Do if the Dashboard Battery Light Comes On?

If your dashboard battery light comes on, it may be time for you to replace your car’s battery. However, it could also be a much quicker and simpler fix such as loose clamps or corrosion. You should, therefore, look at the owner manual and look up some common issues and see if you can resolve them before you take your car to be repaired

Firstly, check to see if there is any corrosion on the battery’s terminals. Give the terminals a good clean and tighten up the cable clamps with pliers or a wrench to ensure there isn’t a poor connection.

If the battery light still remains off, the problem could be a mechanical one, such as an issue with the voltage regulator or alternator, or it could be a systemic issue such as faulty wiring. You should, therefore, take your car to your local auto repair center or garage so it can be checked by a qualified technician and repaired. Once that’s done, you’ll soon be back on the road!